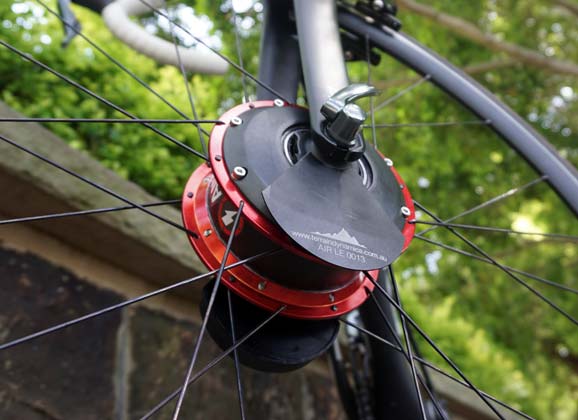 The AIRhub: effective training all the time

There’s a new product about to hit the market that allows you to manage your training loads in just about any environment. If you don’t have a hill but need to achieve a certain heart rate, the AIRhub can help. Want to be social and ride in the bunch but need to get more from the workout? You can do that too thanks to an innovative device created by Michael Freiberg and the team at Terrain Dynamics. 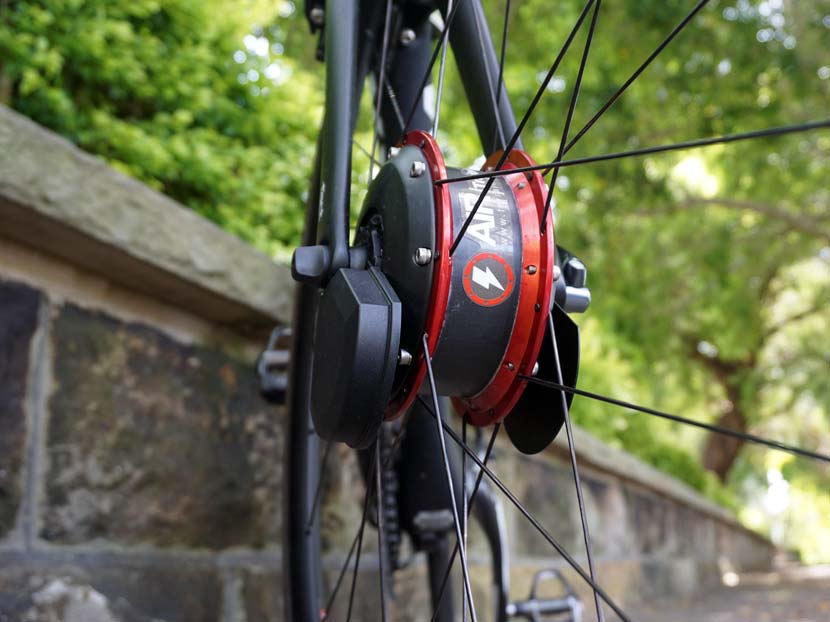 In the lead up to the Tour de France this year, Michal Kwiatkowski was given a program by his trainer. While riding, he had to complete several intervals at a prescribed wattage. To do this properly, he needed hills. Actually, just one decent hill would do – and he could do repeats to achieve what was asked of him. The problem was, the world champion was in Warsaw. It’s flat – very flat!

“I can’t find anything steep enough,” Kwiatek told his trainer, “but I’ll work on a solution.”

He hung up and then went to work on his brakes. He tightened the cables and ensured that his calipers – front and rear – were squeezing his rims tightly before he set off riding again.

It wasn’t the ideal scenario but, his trainer told me in Utrecht on the eve of stage one, “the power files he sent me that evening were on par with what I’d asked for… he didn’t have a hill so he used some ingenuity. His brakes gave him the resistance he required.”

The fun thing about having a problem is finding the solution.

Kwiatkowski isn’t the only rider to find himself in this predicament; needing resistance to achieve the requisite power for a training session is part of modern cycling. 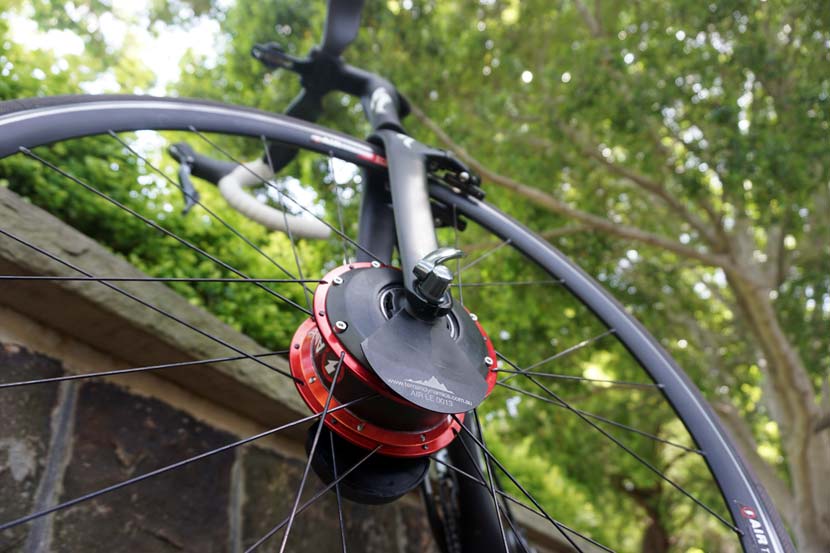 An Australian invention dreamed up by the 2011 omnium world champion, Michael Freiberg, has taken three years to create but the AIRhub is now ready to launch.

According to Terrain Dynamics, “The AIRhub gives you the freedom to devise training rides that are not dependant of terrain.”

Replace your usual front wheel with one fitted with Freiberg’s device and you can “simulate climbs on flat road or ride at threshold on a bike path”.

Using the AIRhub app and a heart rate strap, you are able to program the requisite BPM and – even while nestled in the middle of the training bunch – get the resistance you need to achieve the correct zones.

What is the AIRhub?

RIDE will be reviewing the AIRhub in the next issue. To get an understanding of the product, however, Jack Lynch spoke to Michael Freiberg and asked him to explain some of the basics.

RIDE: I’m here with Michael Freiberg, speaking on the phone. He’s the 2011 omnium world champion for Australia and he’s created what is called an ‘air resistance hub’, something that’s going to revolutionise the way we train on a bike.

Michael, could you tell us a little bit about the AIRhub?

Michael Frieberg: “The air resistance hub is an on-road ergo, so it allows you to fully customise all the load that you’re going to experience as a cyclist. And, with that customisation, it brings you a whole new realm of training.

“You can completely control everything and really accelerate the amount of training you’re doing.

“It improves what we can do as athletes and coaches.”

How exactly does it work?

“It’s a bicycle wheel that slips into your front forks and it’s all Bluetooth controlled, it self-powers – so you are never going to have to replace the battery.

“You can choose a load between zero and 100 watts to add on, or you can pick a heart rate to ride at, and it’ll automatically Bluetooth through with your heart rate data and hold you at a specific heart rate.” 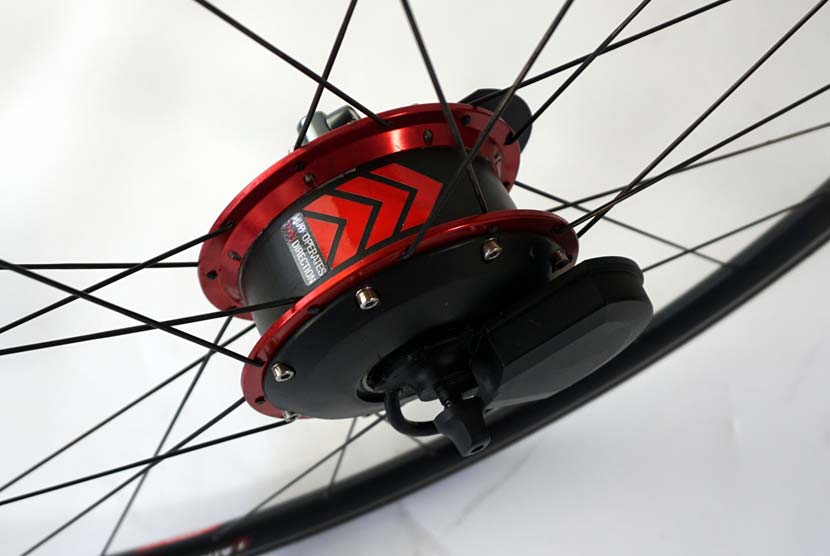 So it keys up Bluetooth with your heart rate strap or your power meter and then it sits into that groove so you can ride at an exact wattage or heart rate no matter what output you’re putting out through the bike?

“Yeah, absolutely. We’ve got smartphone application and you ride with that in your back pocket and that’s where all the communication and feedback with the hub is.

“Really, you pick a heart rate and the hub will work out what power you need to be putting out to hold the heart rate. So, if you’re in a big group ride or something and you’ve been sitting on for half an hour and your heart rate is real low, the hub will kick in and bring that extra resistance on to keep you training in the correct zone.

“When it’s your turn on the front and your heart rate comes up, the resistance from the hub turns off and you’ll still be in the right zone for your training ride.”

It sounds like far out and amazing technology. How did you come up with this idea?

“Well, I’ve been lucky enough to have been exposed to a lot of really good coaches over the years. I was at the AIS for about six years, working with Ian McKenzie, and I had some really good WAIS coaches like Simon Jones, and a coach out of the UK called Rick Stern – and they all focused on quite scientific training.

“They prescribed really good training programs telling you the power zones and heart rate zones to train in. And what I noticed is that everyone was moving towards having more control over their training. That’s when we’ve gone to prescribing towards power and heart rate and things like that.

“I thought, ‘Well, why not create a device that, if I had to go and train somewhere, and it was difficult for me to do it, [the device] would really improve how it all came together.’” 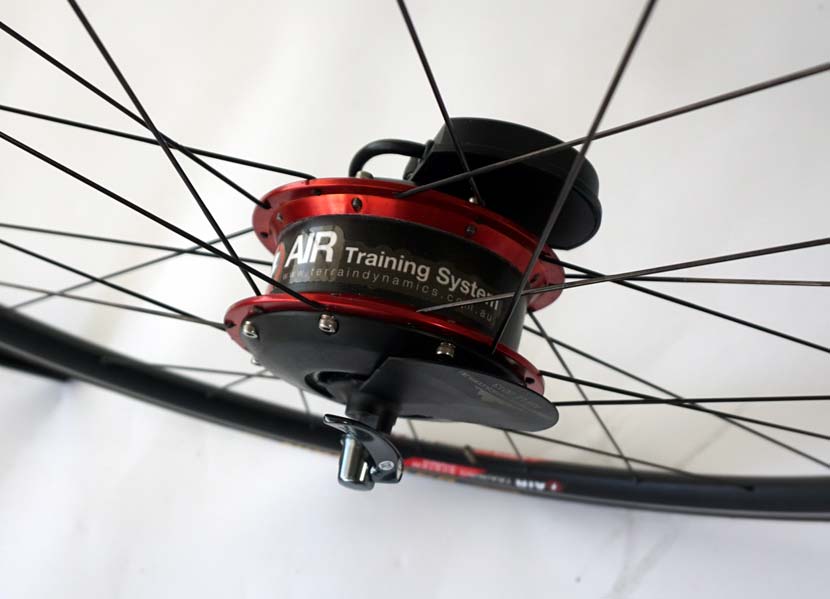 Just so I’m clear on this, you’re saying that you can ride in a bunch and be doing the same amount of effort on the front as you would be sitting three or four wheels back?

“Yeah, absolutely. So, with these training programs that your coaches provide, they say you have to go out and ride at between 260 and 270 watts for four hours. That’s not really feasible in all situations because you may want to ride with your friends, you might want to have a good time… and the environment might not allow [you to get in your prescribed zones]. There might be too much traffic…

“And what this AIRhub does is that, it’s basically as if you were riding on an indoor trainer – but outside – and all the loads are controlled and you can really get the maximum amount of adaptation for every training ride you do.”

“It is. Cycling is a social sport. I mean we push ourselves to the limit every day and if you’re doing that by yourself it gets quite hard mentally and so if there’s a way that you can take the mentally draining aspect out of it and just let the body do its thing, then you’re really going to start seeing results far beyond anything that we see today.”

We’re lucky enough to have a sample here in our office to go and ride with soon. We’ve noticed that it is, obviously, quite a bit heavier than a standard wheel. Have you found that this affects the handling of the bike dramatically?

“No, absolutely not. All the mass is stationary – so the rotating weight has been kept to a minimum.

“It was quite a difficult design challenge because, as you know, the Wahoo Kickers and LeMond trainers weigh about 15 or 20 kilos.

“The AIRhub itself weighs 1.5kg and then the rim and spokes are around that… it was a challenge to get it down to that weight.” 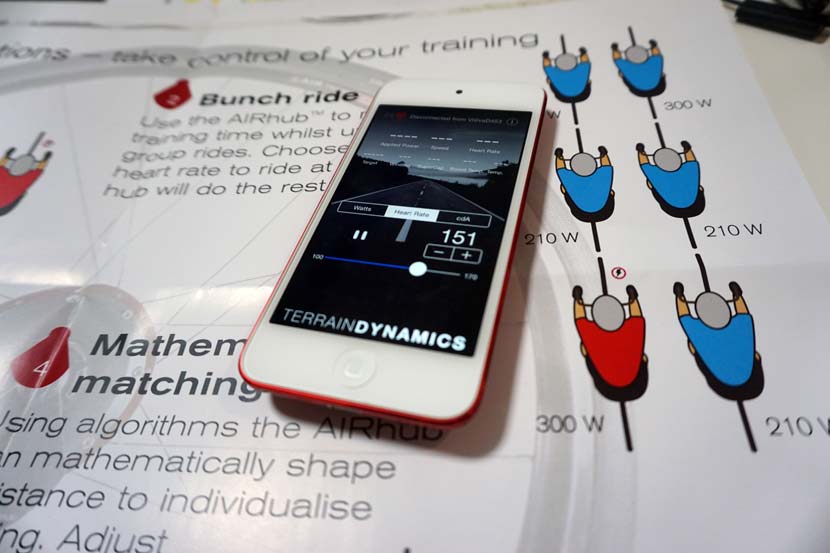 How long did the process take, from conception of the idea to this finished product?

“At the beginning we really wanted to get our ducks all lined up in a row and then work out the total advantage that this thing was going to provide.

“We’re working on some stuff at the moment to get it out there with a couple of universities and sport scientists to really investigate how it’s going to affect athletes when they train.”

It’s already pretty revolutionary so the further we go, it’s only going to get better. I assume it’s available to buy right now and, if so, how much is it going to cost and where can I get it from?

“We’re taking pre-orders at the moment. Production is rolling out in late December and we’re busily putting them together at the moment.

Can you choose the rims to put it in or does it always come with a standard, strong rim [like the one we’ve been sent as a sample]?

“We wanted to keep it to a strong rim. It’s a training wheel so although we have done custom carbon-fibre wheels for some people, we know that not everyone is going to need to push it that far… unless they want to be racing on it – which I would not recommend!”

Have you got plans to kick out the iPhone or the Android app and start linking it up to, say, a Garmin device or another GPS to keep it a bit more slimline for the user?

“Absolutely. Everyone these days rides with a phone in their pocket and it’s all out of the way at the moment. Everything just runs in the background, it doesn’t use any batteries, it’s all low energy Bluetooth.

“In the future it’d be great to hook it up with a Garmin and then you’d be able to sync through training programs and all your coach’s information in one hit. That’s something we’re going to look at down the line.” 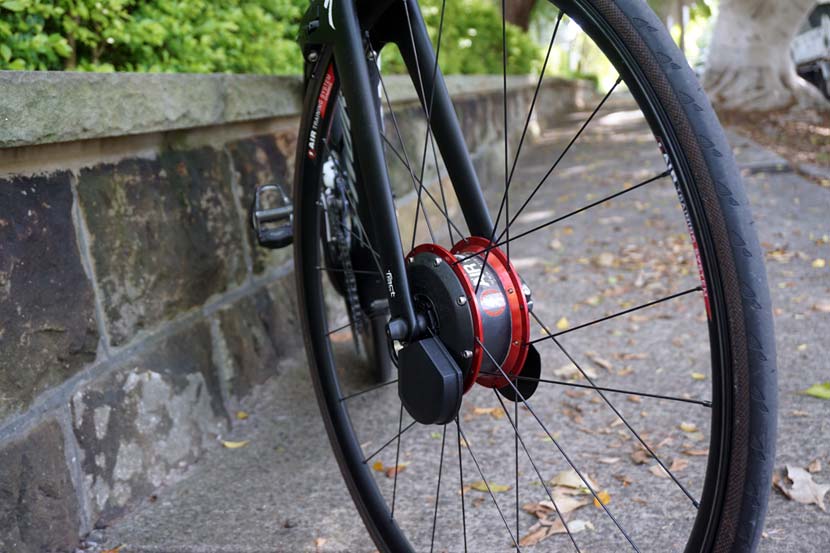