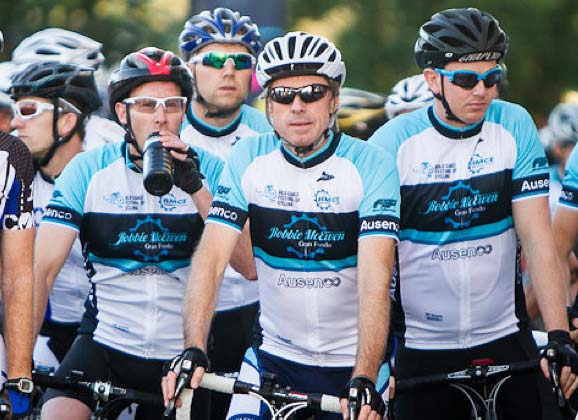 In the final stanza of our interview with Robbie McEwen we get to the crux of what he’s been up to of late. Yes, he’s been watching races and observing sprinters and he’s happy to offer his appraisal of form, technique and tactics… but the thing that’s taking up the bulk of his time is organising an event.

The Robbie McEwen Gran Fondo is part of Gold Coast Cycle Fest. It’s coming up on the first weekend of October. This is the second year that the event is being staged and he’s put considerable effort into designing a route that’s challenging as well as interesting.

McEwen concludes his discussion with Rob Arnold by offering an overview of what he’s put together in conjunction with the festival of cycling on the Gold Coast.

This is a transcript of the exchange. You can listen to the explanation by clicking on the SoundCloud file below (and fast-farwarding to around the 22-minute mark).

RIDE: Can you explain the whole sequence that you have got organised on the Gold Coast in the next couple of months?

Robbie McEwen: “Yeah. I’ve got my own Gran Fondo, the ‘Robbie McEwen Gran Fondo’ as part of the Gold Coast Cycle Fest which I organise with two partners. It’s going to be on the weekend of the 4-5 October.

“On the Saturday we’re running criteriums and it’s around the forecourt at Metricon Stadium [in Carrara] where the Gold Coast Suns AFL team play their home matches. And it’s going to be the Commonwealth Games stadium in 2018.

“So, on the forecourt, we’ve got a nearly-one kilometre circuit – nice a technical with lefts and rights, a hairpin – and really beautiful asphalt for most of the way. A lap is about 950 metres this year.”

So it’s still a really tight Queensland-style criterium? They always seem to be short up there…

“It’s your real, fair dinkum criterium. I’m not talking a four-corner around-a-big-block, or a great big loop in an industrial area that’s 50 metres wide. I’m talking a proper criterium – where you need to use your skills. And people who can ride at the front will be rewarded. Positioning is important.

“As part of the day we’re having a kids’ mini-fondo, so all the little kids get to ride the circuit – just a free-ride for 15 or 20 minutes… we’ll go from the really little ones, up to five, and then from six [years old] up. We’ll divide them into two: keep them safe, keep them flowing around the circuit.

“And we’ve also got a celebrity time trial: a one-lap dash, individual time trial… and we’ve got some guys, for instance, from the V8 Supercars Tim Slade, Will Davison… we’ve got Mat Rogers, an ex-footy player. We’ve got the local weatherman from Channel 7, Paul Burt, doing a ride; Hayley Bateup, a former Ironwoman; Chris Atkinson, a rally car driver; Troy Bayliss, former Superbike world champion… last year’s winner of the celebrity TT. They’re all up for it again and we’ll get a couple more in.

“That’s the Saturday which will also have a big trade expo… there’s heaps of stuff happening while registrations [for the Gran Fondo] are going on.

“And then Sunday is the big one: the Gran Fondo.

“Again a bunch of those celebs are riding in that as well. You can come and ride with James Courtney and Jamie Whincup and the other guys.

“We’ve got three courses this year. There’s almost a beginner’s course, a 50km flat-to-undulating out-and-back course. Then we’ve got a new ride: the 100km, so you can go for the ‘century’ – again it’s undulating-and-flat… heading north from Nerang, taking in the cane fields just to the northern end of the Gold Coast, around the back of Dream World, the marina precinct and just through the very foothills of the Gold Coast hinterlands – it just touches them and then skirts back to Metricon Stadium.

“And then the big one is 135km where we do both Mount Tamborine and Beechmont – they are our two big climbs. That’s the Robbie McEwen Gran Fondo, the big one, presented by Flight Centre Active Travel.

“We’re going to have a KOM during the ride.

“It’s not a race, it’s just a recreational ride but people can release their competitive juices on the second climb of the day – the Condev KOM – and we have electronic timing up the hill, a full Tour de France style KOM point on the top. We’re even going to have a DJ at the top and a barbecue and it’ll absolutely be going off!

“And then you’ve got a great big long descent back down towards the finish.

“It’s a really good day out: 135km with about 2,200 altitude metres of climbing – so it’s a pretty solid but really do-able.

“We’re hoping that lots of people register this year: that we pull a lot in from Brisbane and interstate.

What time does it kick off? The Gran Fondo… is it a tiered start for different distances? How does it work?

“For the longest ride, we’ll be sending them off from 6.00am – in waves of groups of 80-100, depending on how many we get that could take half-an-hour to get them out… and then we’ll start with the 100km group and then the 50km group.”

How many did you have turn up last year and what are you expecting this year?

“We had 1,150 last year and I’d really like to get upwards of 1,500 in 2014. It’s really hard to say now because the first two years we only had a choice between a 50km ride or the longer one… the same two climbs but this year we’re going up the much nicer side of Mount Tamborine – it’s a more gradual climb, the first one, as opposed to last year’s [approach] which is really steep. It was a real leg-buster for the rest of the day so we’ve added some distance but made the first climb a bit more gentle.

“It’s good to have a 100km ride which we’ve never had before. Hopefully we’ll get a lot of people who think, ‘Right, a nice 100km along the coast… that’s a bit of me…’ plus you get an event jersey.”

What’s it cost to enter?

And that’s with the jersey and full insurance…?

“Well, we’re encouraging people to join Cycling Australia and take a Recreational License, which covers them in every Gran Fondo, mass-participation ride, club training… any recreational type ride for a whole 12 months, and it’s like $66 for a whole year. That gives you insurance for all those types of rides. Otherwise they can take a day license for, I think, $17.”

That’s what the future of cycling is… mass-participation. If everyone is out there Strava-ing each other and everything, then at least they ought to be covered by some insurance but also have, like you say, this camaraderie of The Group Ride – it’s what the popularity of cycling has turned to, isn’t it?

“Yeah, well I think people who do these mass-participation rides – these Gran Fondos – they don’t just do one a year. Most do several a year so it’s intelligent to want to insure yourself if you’re going to be out there. It’s not about trusting yourself but about trusting everyone else to no knock you off… I think it’s a perfect situation: buy yourself a one-year recreational license from CA for $66 and you get insurance cover for every ride you do.”