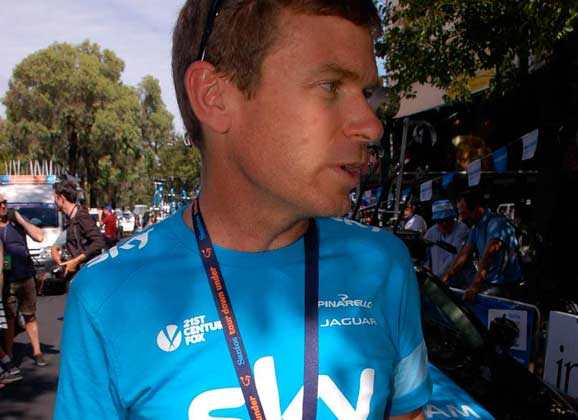 An Australian who was pivotal in changing the way Australia’s swimming team prepared for sprint events is now a key member of Team Sky. RIDE caught up with Tim Kerrison during the Tour Down Under to find out how he found himself working in cycling. Here is the transcript of his exchange with Rob Arnold… 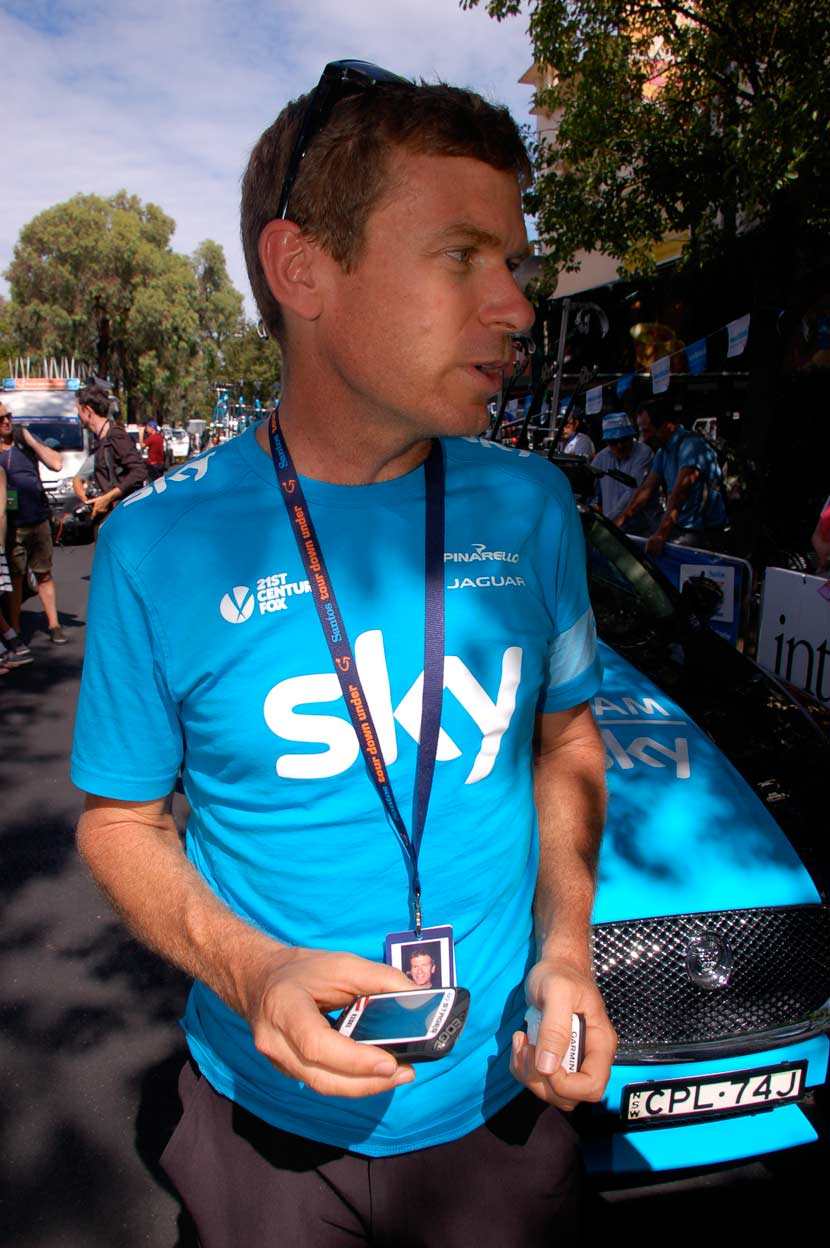 Tim Kerrison at the start of his fifth season with Team Sky.
Photo: Rob Arnold

RIDE: Are you able to offer a brief summary of how it came to be that you ended up working for Team Sky?

Tim Kerrison: “It’s a bit of a lengthy story but I’ll try to summarise.

“I was a rower in Australia and then worked out pretty quickly that I didn’t have the talent to achieve what I wanted to achieve as an athlete so I got into coaching instead.

“I coached the Australian rowing team through until 2002 and, at the same time, I was working as a sport scientist at the Queensland Academy of Sport with the swimming team. At that time we had the bulk of the big performers in the national squad.

“I was lucky to work with a lot of really fantastic coaches and athletes across the whole spectrum all the way from Grant Hackett, who was winning Olympic medals and world championships in the 1,500m, to the sprinters. My particular focus was working with coach Shannon Rollison and his group of young sprinters who were coming through.

“We really changed the way Australian sprint swimmers were training at the time. And that culminated in 2004 with a young girl who we picked up as a very raw talent and developed with a pretty radically different training methodology – that was Jody Henry. We developed her through to 2004 when she won three gold medals at the Athens Olympics (4x100m freestyle relay, 100m freestyle, and 4x100m medley relay).”

What were the ‘radical’ differences that you were doing back then?

“Australian swimming in general had a really strong heritage of distance swimming and distance focused training. And it probably didn’t quite suit everyone, particularly the females who aren’t as naturally anaerobic and don’t have the same natural strength and sprint qualities that men have. They really need to work quite hard on developing their speed and their strength.

“Our program still didn’t ignore the requirements for aerobic development and technical development with a fairly high volume of swimming but it focused a lot more on developing the strength and sprint qualities.

“We also developed this concept of ‘reverse periodisation’ where instead of having a fairly slow, steady build up into a season and then adding intensity as the season goes along, we flipped that on its head and started with intensity – strength and speed – and then layered on the more aerobic conditioning elements on top of that as the season progressed.

“Soon after that I left Australia to work for the British swimming team. I was there from 2005 until 2009 – so I went through the Beijing Olympics with them. It was their swimming team’s best Olympics since the London Games in 1948. But they were still in their development phase in advance of the London Olympics in 2012.

“Through my time in British swimming, I got to know some of the guys from cycling including Dave Brailsford, and in 2009 I was looking for a new challenge, a career change.

“I was actually offered a job with the English cricket team and while they had a great couple of years, I’m quite glad I wasn’t working with them this season. 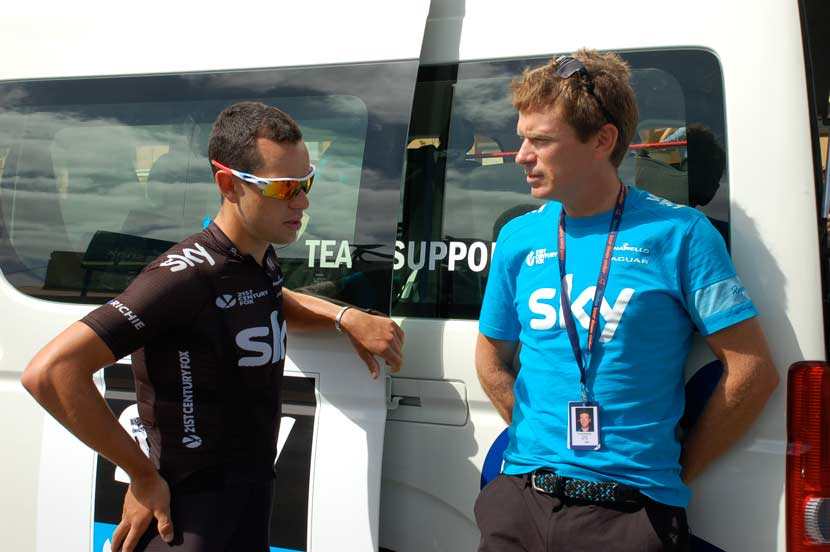 “Dave Brailsford came to my rescue and offered me a job. So, as Team Sky was being started, I got the chance to work in cycling and that was something that always appealed to me.

“Ever since watching the Tour de France as a young kid, I thought it was ultimate sporting challenge. I’d ridden a bike a bit when I was a kid and when I was a rower so I could appreciate the level at which they perform day in and day out for three weeks.

“I could see that cycling was entering a new era, that the sport was cleaning itself up… I had watched British cycling through until the Beijing Olympics and saw how successful they were with the approach they took and it really resonated with me. It was a group of people who I knew I could work well with so I made the leap and started with the team in September 2009.

“The team started racing in January 2010 – here [in Adelaide] actually – and I really spent that first year just learning about the sport. It is pretty hard to go into a sport at the highest level with a team that’s aiming to be the best in the world, when you don’t know much about the sport and your job is to have an impact on performance.

“Really it was The Perfect Time to be entering. I think we’ve been quoted that we ‘exploited a knowledge gap’ and I think it’s not so much that, but a culture gap – there just wasn’t the systematic coaching systems in pro teams, or systematic use of sport science so there was a real opportunity.

“We could see that there was a real opportunity to do things the right way and do them well – and have an impact quite quickly.

“After that first year in the sport, when I was doing a job but also observing a lot, I was given the task of working with Bradley [Wiggins] the following year [2011]. He had had a fairly disappointing 2010 but we believed that we could turn that around.

“We had a good look at what we thought it took to win the Tour de France and where Bradley was at and we started his path towards eventually winning the Tour less than two years later.”

Was that ‘reverse periodisation’…? There must be much more to it.

“It has been said that we applied that idea but I think we applied the same process: looking at what the demands of the event are, and really having a good understanding of human physiology – and that’s the same whether you apply it to a rower, swimmer or cyclist. And they’re all similar. Obviously the demands are different but you’re dealing with the human body and the human body responds and adapts to demands in broadly the same way although every individual is different as well.” 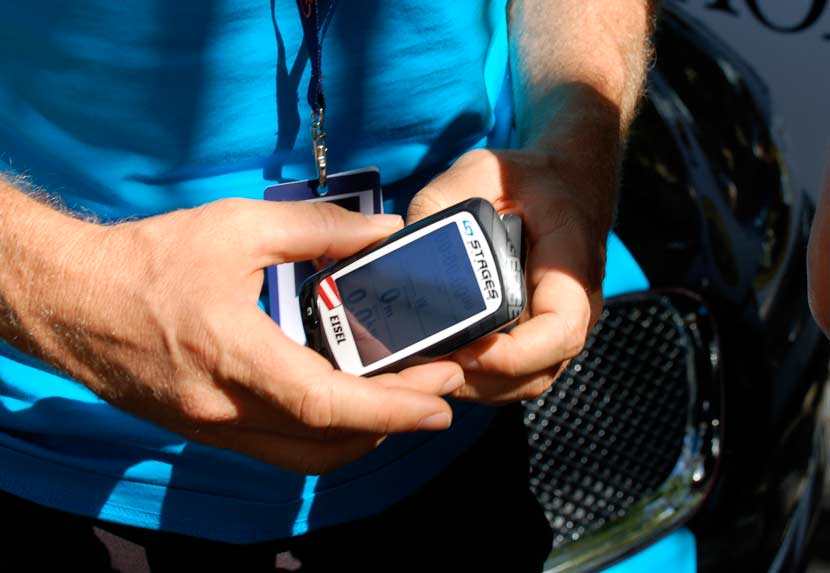 Kerrison and the Sky team will be using Stages power meters in 2014.

What about the personality traits of Jody Henry versus Bradley Wiggins? Are you dealing with the mind as much as the body?

“We have a very, very good psychiatrist who works with the team, Dr Steve Peters, and we have a coaching team so I guess we all interact with the riders on a daily basis. Every staff member who interacts with riders has to have a sense of what makes that rider tick.

“Certainly, like any sport, there is a broad range of personalities and some riders you just have a natural rapport with and with some riders its harder work. Some riders are great communicators, some aren’t so good so of course we have to adapt the way we are to get the best out of our riders.”

Under the guidance of Brailsford it all comes together. He seems to be the perfect delegator…

“He has a pretty broad remit in that he’s still performance director at British cycling, so he’s looking after the British Olympic cycling program on the road and track so he’s still got a fairly large responsibility there. And then he’s the principal of our team. But I can speak for our team and say that we’ve got a very good senior management team consisting of Dave, myself and a couple of others who work really well together. And then, with the performance layer underneath that, we have a fantastic group of coaches – the best group of coaches I’ve ever worked with. We bring different expertise.

“I wouldn’t say any one of our coaches is the complete coach but we all come from different backgrounds and work really well together with our riders to get the best out of them.

“Then there are our sports directors who are the guys who deliver the performances on the road; they’re a great bunch as well. 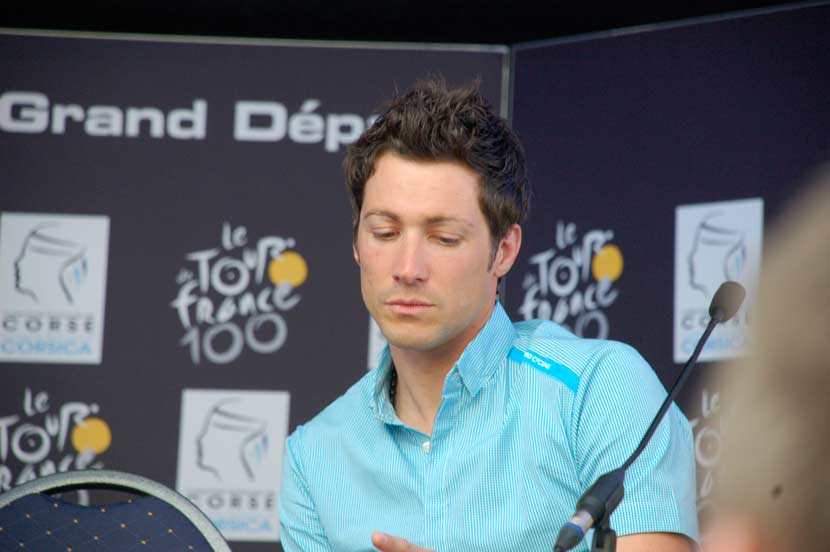 “The people we have driving this team now really understand the culture of the team, most of them have been with the team since the start. We’ve had a bit of a turnover of staff and riders but we’re now at the point where, into our fifth year, everyone understands the way we want to work as a team. We’re all on board. We all think the same way. We all get along really well. So it’s an exciting time going forward.

“We’ve won the Tour the last few years but we want to keep doing that and we want to maintain – or regain – our position as the world’s number-one team.”

And is cycling your sport now? Are you leaving rowing and swimming behind?

“Um, it’s my sport for the time being, yeah.

“I guess my career has been a bit of a journey through disciplines – sport science, coaching and management, three different sports from rowing to swimming to cycling… and across continents, from Australia to the UK and now into a really international team, and from an amateur sport to a professional sport. I’m not sure what’s next for me but for the time being cycling is my sport.”