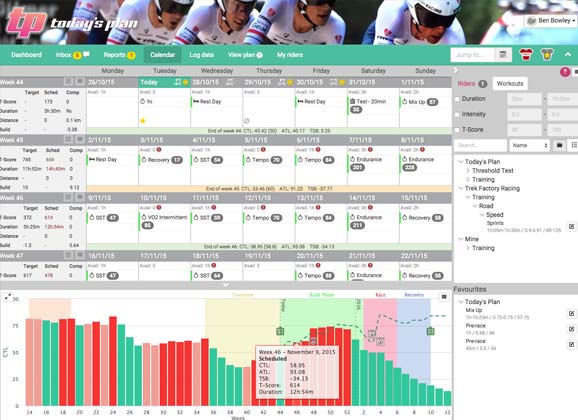 Today’s Plan: making the most of cycling data

There’s a way to capture data and tweak your cycling habits so that you get more out of the time you spend on the bike. Today’s Plan has recently established a partnership with Trek Factory Racing but there are features from this Australian company’s initiatives that can be applied to every cyclist. 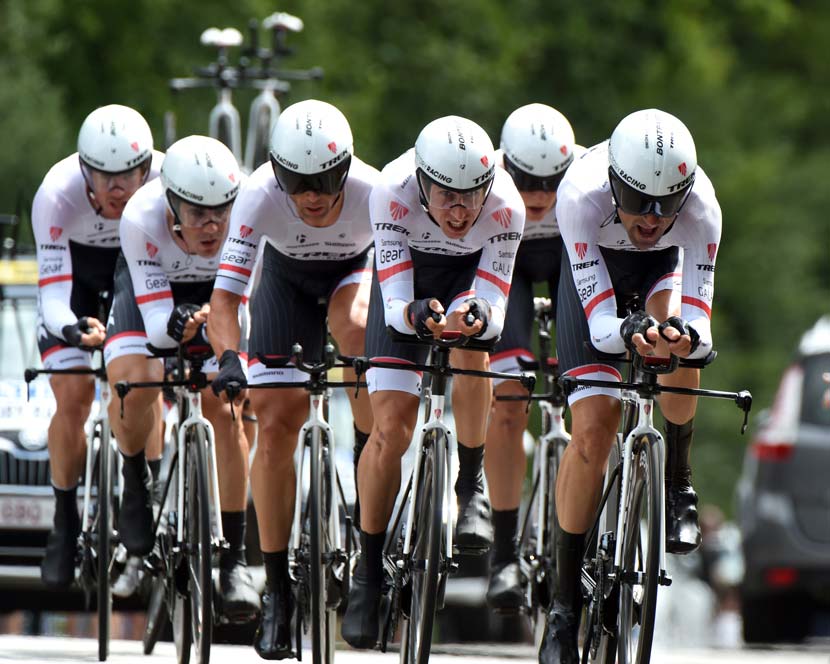 Today’s Plan recently announced a partnership with Trek Factory Racing… chances are we’ll see a lot more data from that team in 2016.

Click the SoundCloud file to listen to the exchange and/or read the transcript below.

RIDE: I’m talking with Ben Bowley from Today’s Plan. He’s the CEO of a tech start-up that’s offering coaching and data acquisition for cyclists who are keen to find out more about their performance – and also enhance their performance – through clever technology.

Ben, I wonder if you could give us a little overview of what Today’s Plan is all about.

Ben Bowley: “There’s a couple of aspects to what we do. The partnership we’re announcing [on 29 October 2015] with Trek Factory Racing is at the very top end of the cycling spectrum with one of the world’s leading teams.

“What we’re providing for Trek Factory Racing is a data, training, and coaching platform for them – so that they can get the data from all their riders when they’re training around the world and their coaches can analyse that data and prescribe their training and communicate with their riders.

“Of course we’re just talking about the WorldTour team but, actually, Trek has eight Trek Factory Racing teams in other riding disciplines as well.

“Whilst we’re starting with the road team, this will extend into the other teams over time as well.

“That’s at the very top end of the pyramid, the very pointy end of riding – for the most elite riders in the world. Of course we’re thrilled to be working with Trek Factory Racing, and working with the best-in-class.

“At the other end of the spectrum, we offer a product for every day riders that gives them the opportunity to create their own structured and tailored training program through what we call our ‘Training System’.

“What that does is let those riders input their own goals, their own availability for training, their equipment, and the level of rider they are currently… and our system dynamically generates a training program for them, tailored for them to follow. That starts at $30 for a six-week plan, so it’s very affordable and it’s a great step into structured training for cyclists who have never been able to follow a structured plan before.

“It offers a lot more flexibility than a ‘canned plan’ where it’s not tailored to the riders’ individual availability.

“That’s just a very brief overview of what we do; we’re covering both ends of the training spectrum.” 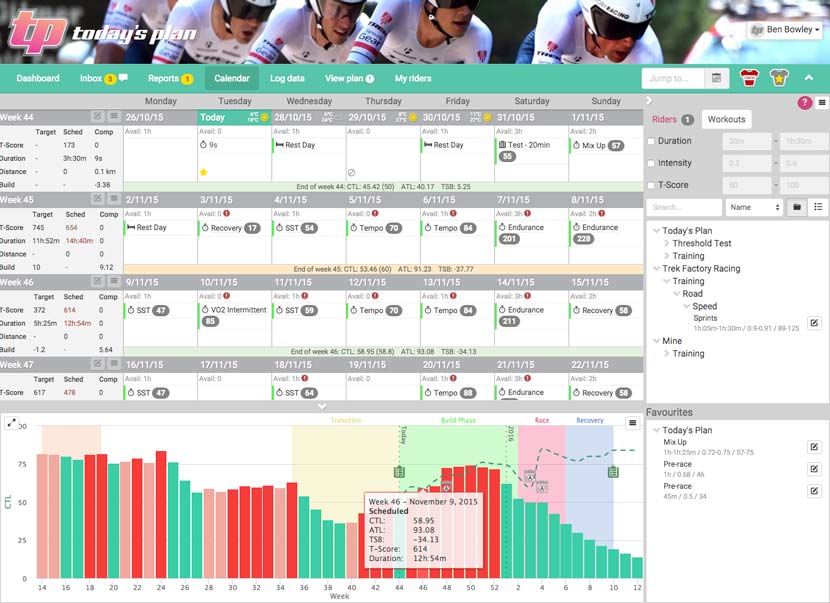 We had a little bit of a preamble and you talked about power meters often being perceived as, more-or-less, ‘random number generators’ – which strikes me as a fun line – but people are now getting their heads around what sort of wattage is impressive. When we cover a race, for example, if someone tells us their output, generally the pro riders have impressive numbers and people can be – for want of a better word – a little bit gobsmacked about it. And it encourages a big dose of conversation.

“Yes… part of the strategy for us as a company is to utilise our extensive data platform to be able to make it simple for riders of all levels to take data sensors – whether they be heart rate sensors, or power meters, or cadence sensors, or indeed other sensor technology as it emerges – and ingest that into our system.

“From getting that raw data [we] create meaningful data for riders and their coaches to be able to follow.

“As with all new technology there really are a lot of misconceptions about power meter data.

“A lot of people really don’t know how to train properly with it. 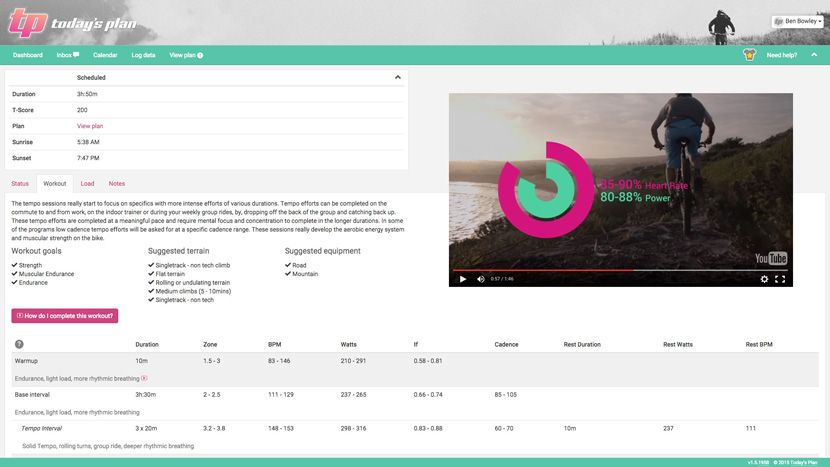 RIDE Media had a collaboration with Today’s Plan during the Tour Down Under where we were tracking a number of riders. We were uploading live data. We’re going to have another crack at that next year, I hope, because it was quite a lot of fun. But can you – for the purpose of this interview – summarise what can be streamed live, and how the mechanism works?

“Sure. One of the things that we did as a proof of concept as part of our technology vision, is we created an app that runs on the Android platform that is really a very highly functional cycle computer.

“Part of the functionality of that is data streaming.

“We do a number of things in this app: high-speed data logging; automatic file uploads – so, no need to connect to another device; and then this streaming capability that we have.

“That can stream any data that the rider is producing: cadence, speed, heart rate, power data… and it’s really fascinating to watch…

“Of course, we were watching it in collaboration with you guys at the Tour Down Under but for a coach could send one of his athletes out to do a power test or a special ride and could sit back in the coach’s office and watch the data coming from their rider live, streamed at one-second intervals.

“It’s pretty incredible that you can get that sort of functionality on an Android phone for a few hundred dollars.”

It’s the future happening now. Where do we go from here? Are you surprised that this sort of technology hasn’t been… ah, there hasn’t been an uptake of it with broadcast?

“I think that cycling coverage can be brought to life a lot more by this sort of live data streaming that we did with you guys at the Tour Down Under.

“The UCI currently have some pretty strict rules about it.

“But I think for the viewer it is interesting because, as you pointed out, a lot more people are getting engaged with their data… so it is of interest to people.

“Of course, in other sports we’re accustomed to seeing these metrics live; you turn on the cricket and you see the heart rate of your favourite fast bowler.

“When you watch the V8 Supercars, you see all sorts of data being streamed live from the race car.

“So it seems logical to us that, for cycling, this would be another step and a great way to engage viewers over a longer stage.” 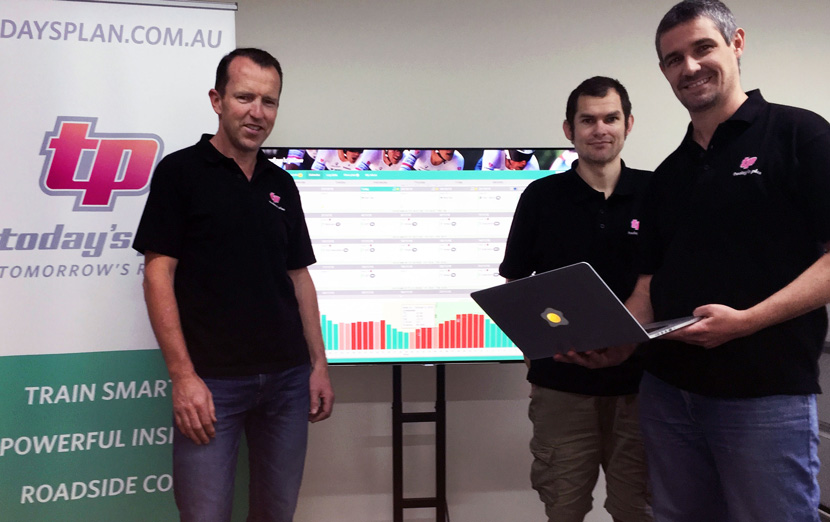