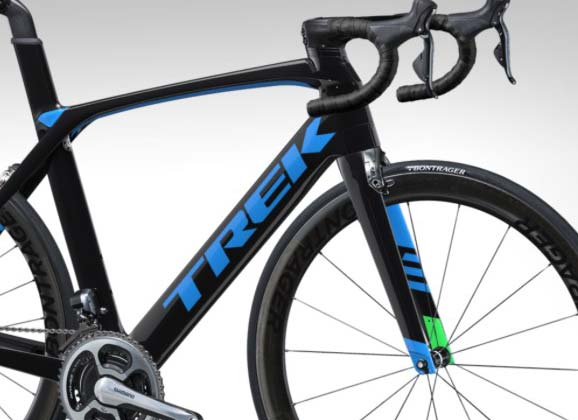 An online palette of colours is in offer for Trek customers who would like to customise their bike before they buy. RIDE’s tech editor, Jack Lynch, once ordered a bike this way and he ended up calling his ridable work of art ‘The Silver Bullet’. Before being offered the job, he explained his experience and the reasons why he opted for the 7-series Madone.

Recently a new iteration of Trek’s famous frame was launched and it is also available with Project One customisation.

We spoke to another customer about his colour choices…

Click the SoundCloud links to listen to the interview and/or read the transcript below. 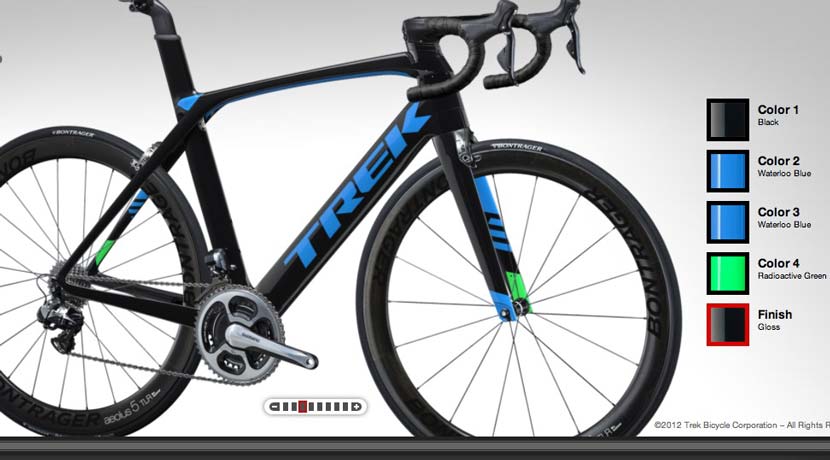 RIDE: I’m speaking with Brian Darby who is about to become the owner of a new Trek Madone that he’s done with the Project One [custom] colours. He’s already got a Speed Concept which he’s done with Project One as well. I thought I’d find out what it was like, as a customer of Trek, to go through the ordering process – and why he’s come up with the colour scheme that he has for the new bike. Can you explain the green, black and blue?

Brian Darby: “Sure. The colour is one of the hardest things to pick out on one of these bikes because you have such a huge selection of choices and layouts and schemes. But I wanted to do something with a little bit of blue and green in it because that’s what the Melbourne Cycling League team colours are. So, that part was relatively easy.

“Then I just had to choose if it was going to be an all blue bike with some green, or a mainly black bike with blue letters and green trim… and then what shade of blue?

“There’s a lot of different colours: there are more metallic, shiny colours; there are gloss or matte finishes… of all of them, probably the hardest thing to pick out on one of these Project One bikes is what paint scheme you want to go with.”

Did you find that you were going through the palette and finding some, let’s say, ‘horrible’ mixes or did you know exactly what you wanted? Did you experiment a lot with the computer program?

“Oh yeah, for sure. I think my wife got quite tired of me asking, ‘What about this one?’ ‘How does this look?’ ‘What do you think about this set-up…?’

“You definitely go through a wide variety of choices.

“If you have some idea about what colours you are interested in to start with, you can eliminate some choices.

“I knew I wasn’t interested in orange bikes, so I didn’t look at too many orange coloured Project One Madones.”

You’ve still gone for a majority black frame. Is that going to be an ongoing theme of your bikes or do you feel like you may grow tired of the prevalence of black in the peloton?

“I don’t know. I think that black, for me, is something I view as kind of timeless and it looks fast. I need all the help I can get to look fast.

“I have had many black bikes over my life so I think black will always be something that I go for.

“I definitely like the blue and the green trim on the bike. I think that looks pretty sharp.”

We see green on the inside edge of the stays and the fork. Does it appear on the outside at all?

“No, just inside the stays and on the tips of the fork as well.”

And you got to customise the colour of the IsoSpeed link, is that right?

“Yeah, that comes up as one of the colour choices when you go through the palette of the paint scheme that I’ve picked up: it’s called ‘Off the front’ and then there’s a whole range of different colour choices that you get to play with – and one of those includes the IsoSpeed decoupler.”

I think it’s going to be a smashing looking bike. The big surprise is how it translates to how it translates from computer screen to bike. You’ve already done a Project One, so you understand how that works. Were you surprised when you received your time trial bike? Was it exactly how you imagined it?

“It was pretty much spot-on… I was very pleased about that.

“It gave me a little bit of confidence for the next time I did a Project One bike. I know that whatever I design is actually going to be what comes out.”

Especially when you’re mixing with a ‘metallic’ palette…

“Yeah, absolutely. When you start picking up some of the different black smoke or carbon smoke colours, or some of the metallic colours, then it’s a little bit trickier to know what it’s going to be like.

“Sometimes you just have to make a leap of faith and go for it.”

I can tell by your accent that you’re not an Australian. Are you from near Wisconsin? Is there a Trek connection? Why did you go with the Trek brand for a couple of bikes?

“I grew up in Arizona and moved to Melbourne about three years ago and we’ve been having a smashing good time here.

“I have no connection with Trek whatsoever.

“Sean at Peak Cycles was kind enough to chat with Melbourne Cycling League and help us out with some Project One stuff and that’s where it all started… we’ve just gone from there and a few of us have started to order some bikes at this point and others are in the process of designing.”

Have others in the club gone for the same scheme as you? Is it going to be a ‘Team Bike’…?

“I think everybody is kind of picking out their own scheme of colours. That’s one of the things that Sean is hoping for – that we’d all design different bikes so we could show what is available through Project One in term of options and things you can do for cool looking bikes.

“Some others are working on various versions of Madones as well right now so it should be pretty neat to see all of us on different Trek bikes that have all been designed by us.”

I’m intrigued to see the mix. It’ll be a lot of fun, especially if you’ve all gone with the same ‘Waterloo Blue’ and the ‘Radioactive Green’… how the variations work in different set-ups.

“It should be pretty interesting to see how all that shapes up in the coming months.”

One last question, Brian: the pricing of it. What’s the extra for doing the custom paint?

“Uhm, it depends on the bike, I think but the deal with the Madones – if you go with a Project One – is that it goes from 600 series carbon to 700 so it does add a little bit of an up-charge in terms of cost. Off the top of my head, I don’t remember what that is.

“The various paint schemes definitely have up-charges – it could be about $100 more for some paint schemes that weigh almost nothing and, ironically, they’re charging more money for having less paint on the bike…

“Some of them are $500 more, some are $800 more for different paint options, but it’s fun. You get to design and build your own custom bike so, in terms of being able to do that, I think it’s on the relatively inexpensive side from a custom standpoint.”