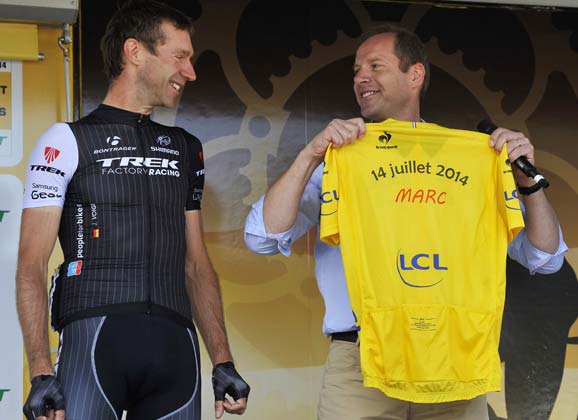 Voigt: “It was a wild time but it was great”

During the course of his long career, Jens Voigt would win a range of races and help many others achieve success. The German was a key team-mate for many of cycling’s big stars but he earned his own moments of glory – sporadically, but very publically.

Voigt has a large legion of fans for good reason: he entertains. That’s why he’ll be appearing on stage in Australian cities talking about his career and life in general as part of The Tour On Stage this coming November.

In part two of this series, Jens talks about the day he essentially helped Oscar Pereiro win the Tour de France by doing what he loves best, being part of a remarkable breakaway… but, as is often the case with Voigt, the line of discussion would change dramatically.

He’s a cyclist and an ambassador for the brand he used to represent as a professional rider. He’s a commentator and a citizen of the world.

He got his start as a pro cyclist thanks to a team sponsored by Giant Bicycles, the Australian Institute of Sport (AIS) and a Czech air-conditioning company, ZVVZ.

He has seen cycling change a lot during his years on the pro circuit but for that to happen, the political environment of his homeland had to undergo a major change. 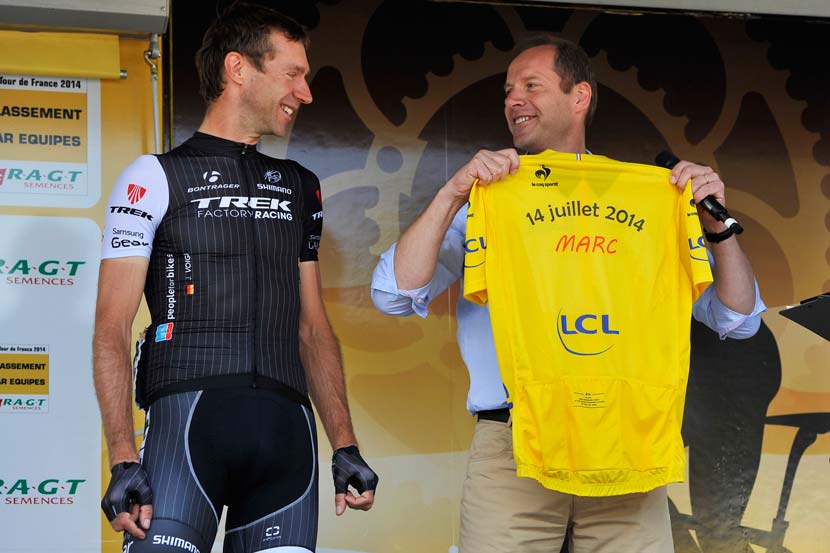 Voigt received a collection of special-issue yellow jerseys on 14 July 2014, one for each of his six children during what would be his final appearance in the Tour de France.
Photo: Graham Watson

RIDE: We saw you win that epic stage in 2006 of the Tour de France, which effectively won the title…

And I remember at the finish [of stage 13, 2006] in Montélimar, you told me, ‘I feel fresh enough, I could easily ride the stage backwards…’ but it destroyed a lot of people and basically helped Oscar Pereiro become the champion that year.

“That’s true. I remember it was a long and fierce battle to get the breakaway established because people knew the mountains [of the Alps] were coming up and it was one of the last chances of a breakaway so it took an hour of full-gas racing to actually establish the break.

“In the end there were four guys out there and, at the very last minute, I jumped across to them – and hardly reached them. It was a good group: there was Sylvain Chavanel in there, and Andriy Grivko – back then he was with Milram… Pereiro, myself and I don’t know who else [Manuel Quinziato].

“All were strong riders.

“Since it took so long to get the breakaway established, the peloton allowed the break to move and by the end we had over half an hour.

“Oscar was the best-placed rider, he was 32 minutes down [on the yellow jersey after stage 12, Floyd Landis]. And so they just stopped completely. We gained, very fast, a lot of time…

“After we gained 15 minutes I went to Oscar – and I remember this, you can ask him – and I said, ‘Hey Oscar, hahahaha… we’re going to get the yellow jersey for you! Hahahahah!’

“We were actually joking about it because once you have 15 minutes, you don’t need to ride full-gas anymore. You try to become more efficient because you know you’re gone for the day: 15 minutes? They’re not going to catch you and you know the stage winner will come out of your group.

“So we tried to be efficient and save energy as much as we could.

“We had the ability to talk a little bit. And I talked to Oscar about it and he was just laughing at me. ‘Yeah, that’s so silly… I hadn’t thought about that. Hahahahaha.’ And then it grew: 20 minutes, 25 minutes…

“I went, ‘Oscar, no kidding – we are actually gaining serious time here!’

“In the end it was Oscar and me left after we managed to drop the others [near the end of the stage] and I could win the sprint and Oscar took the [yellow] jersey.

“In the years afterwards Oscar still came to me and we chatted about that ‘Crazy Day’ when he gained 32 minutes, took the yellow jersey and ended up winning the Tour de France!” 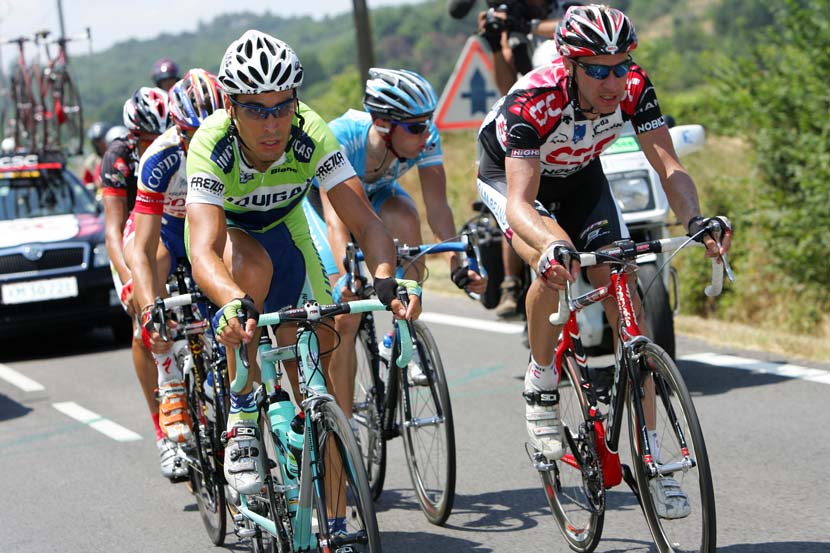 The break on the road to Montélimar in stage 13 of the 2006 Tour de France… Voigt won the stage and Oscar Pereiro took the yellow jersey.
Photo: Yuzuru Sunada

It’s lucky you’ve got a good memory and you have the recall of all of these incidents. Are you comfortable now, in retirement, talking about all of the accomplishments that you had over the 20-odd years of racing? Do you like going back and retracing the anecdotes that people know?

“I guess I’m just like every old man who is past his prime time: of course I like to talk about my prime time! Hey, that’s normal.

“It’s probably like Michael Phelps still likes to talk about his Olympic medals or Cathy Freeman still talking about her Olympic gold medal in Sydney 2000 even though it’s 15 years ago. That’s just normal.

“But I also like to talk about my failures so I can maybe help people to understand and help them to not make the same mistakes.

“I also love to talk about family life – you know, with six kids, man you have a million stories.”

Going back to your failures… what was your biggest failure as a pro cyclist? And how would you remedy that now?

“Not having enough confidence early on.

“I was always a good rider but in the French team [Gan and Crédit Agricole, 1998-2003] I looked at myself more as an opportunist, or somebody who needs to have a lucky opportunity to make a breakaway and then win.

“I never considered myself as a big rider who actually could go with the big guys in the end.

“In the French team, I had a lot of wins but smaller ones – mostly stages or smaller stage races.

“With Bjarne [Riis, at CSC from 2004-2010] I started also winning bigger races and performing better because he just gave me more confidence, plus we had a super-strong team around us so it was easier to have confidence. If I failed, there were at least four or five guys who were as good as me and they could back me up if my plan failed.

“I would like to have shown more confidence earlier.

“Then I would have asked for more money earlier too…! Hahahahahah.” 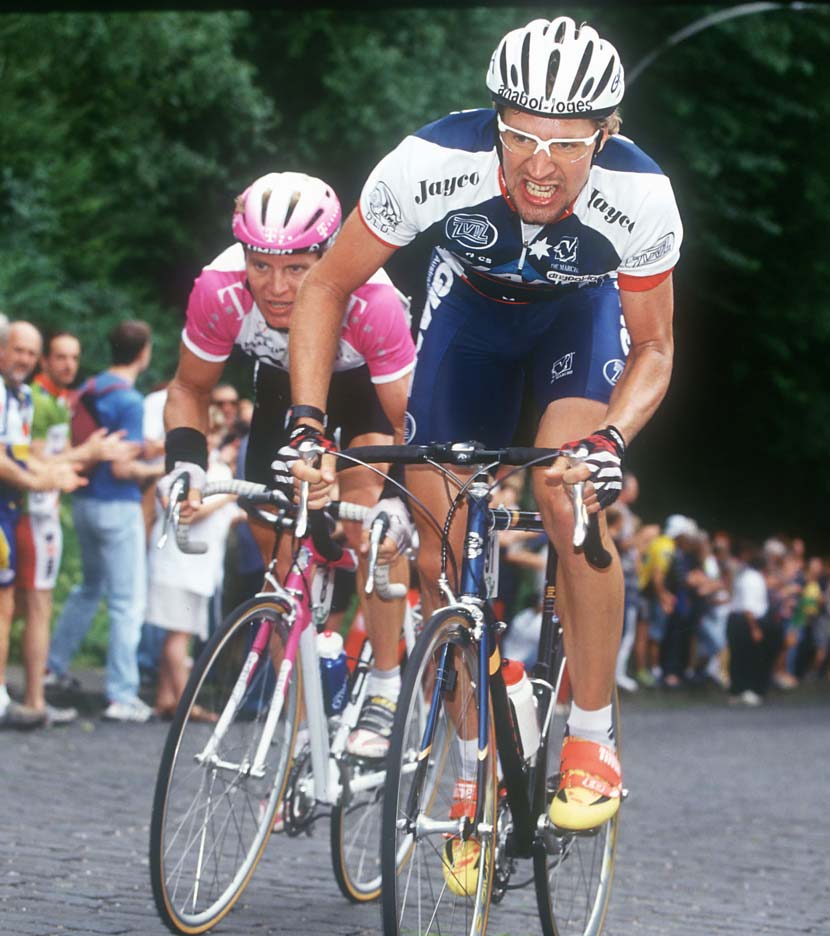 Voigt made his professional debut with the Giant-AIS-ZVVZ team in 1997.
Photo: Graham Watson

“I know! That was the birth of my career.

“I couldn’t find a contract. Back then we had cycling organised, roughly, in first-division teams – and there were 20 teams, I believe – and second-division teams. Now it’s WorldTour and Pro Continental…

“Since I won the amateur World Cup in 1994 with the points I gained in Australia in the Commonwealth Bank Classics – or, what was the official title? The Pacific Power Commonwealth Bank Cycle Classic…? It was a long, long name… but with the points I earned there I won the amateur World Cup and that was basically the high point of my amateur career.

“For two years I struggled to find a contract and finally I got the opportunity to sign with a smaller team. None of the bigger teams wanted me.

“Back then you didn’t have the internet or mobile phones, you had fax machines so you had to write a letter to teams. And, you know, who answers a letter?!

“Now you can just Google up whatever team, find out the phone number from the service corse and call them and say, ‘Hey, here I am – I’m a young amateur and I want to have a contract, I want to have a chance…’

“Back then, when I started, you didn’t have that so it was more like you needed to know somebody who knows somebody who happens to know another person… and I just never had all those relationships in professional cycling.

“That was pretty good but I also must say, the first time I experienced real Australians… that was an eye-opening moment! They showed me things that no German eye had ever seen before. My god…!

“I saw all sorts of aspects of grown up life… hahahahaha!” 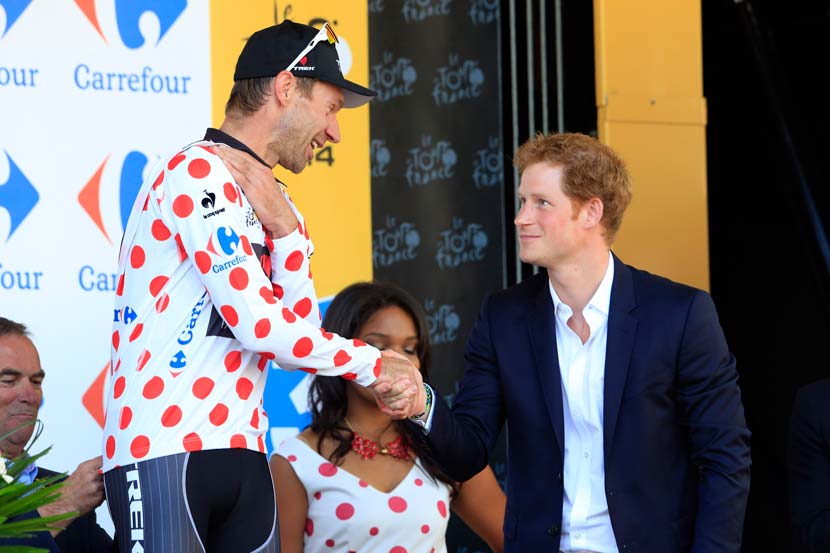 Cycling. Royalty. Jens Voigt and Prince Harry after stage one of the 2014 Tour de France. The King of the Hills in royal company.
Photo: Graham Watson

You were in Germany as a young man when the wall fell. How can you compare Berlin now to Berlin then? I’m curious about the old Eastern Bloc days. How old were you when the Berlin Wall came down?

“I was just 18, doing my last year of high school.

“I lived in a dorm in a special sports school in East Germany, something like the AIS, about 300km south of my parents’ place. We knew about the demonstrations and people wanting to have the border open and all of that. But on that particular day I had my TV and radio switched off while I prepared something for school.

“I wasn’t aware that the wall was down because I locked myself in my room and concentrated on my school work. Then a friend of mine and his wife showed up and said, ‘Hey, the wall is open – the border is open! You want to come?’

“Of course it was on all the channels; so we jumped in his car and drove towards the border and then went across the border on the very first day when the border opened.

“It was not unthinkable that the Russian army would just come and close everything with soldiers.

“We looked at the chance and thought, ‘Okay, this may be a once-in-a-lifetime experience.’ So we went across the border and fortunately there was no violence involved and the Russians decided to let East Germany go and allow the reunification and release East Germany out of their control.

“That’s a complicated story and let’s not go too far into that.

“But definitely my life is a lot better.

“I was happy when the wall came down. There was a year of a little bit of uncertainty because it took a year until the countries were united – but it gave me a chance to meet my wife and it gave me the chance to become a professional bike rider.

“For me, the wall came down at the right time and I’m really happy that it happened like that, definitely.

“To help you understand how fast the time goes, my eldest son Mark – he’s 19 now – he was born after the wall came down and after the unification. He doesn’t know and he doesn’t care about this special day in our history. For me it’s a big date in my life and I celebrate it, but my son goes, ‘Yeah, whatever… it’s just another day. I’m happy that I have a day off school but it doesn’t really mean anything to me.’

“He wasn’t born by that stage, right? He hasn’t seen the history in the making.

“But it was a great, great time and looking at the world today it was a pretty nice example of how peaceful a revolution can be.

“We did overcome the dictatorship of the East German party and not a single person got shot or injured. That’s pretty unique…

“We were lucky. We were blessed that the wall came down without any violence or any soldiers or police shooting at civilians.

“It was a wild time but it was great.”