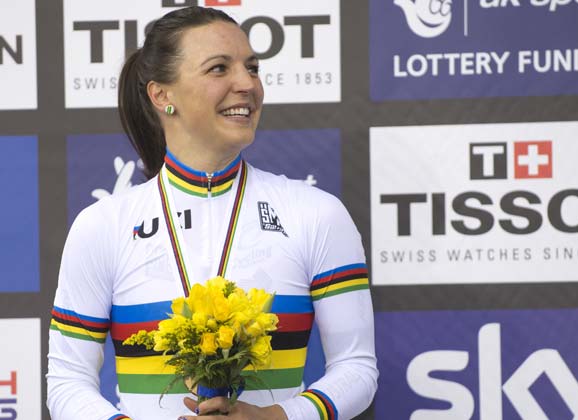 Gold in Paris in 2015. Gold in London in 2016… the individual pursuit at the world championships is Rebecca Wiasak’s domain. For two years in a row she’s taken the title but the focus now is to see if she can make selection for the team equivalent in Rio.

Rob Arnold caught up with Wiasak upon her return to Australia to get her take on another winning experience. 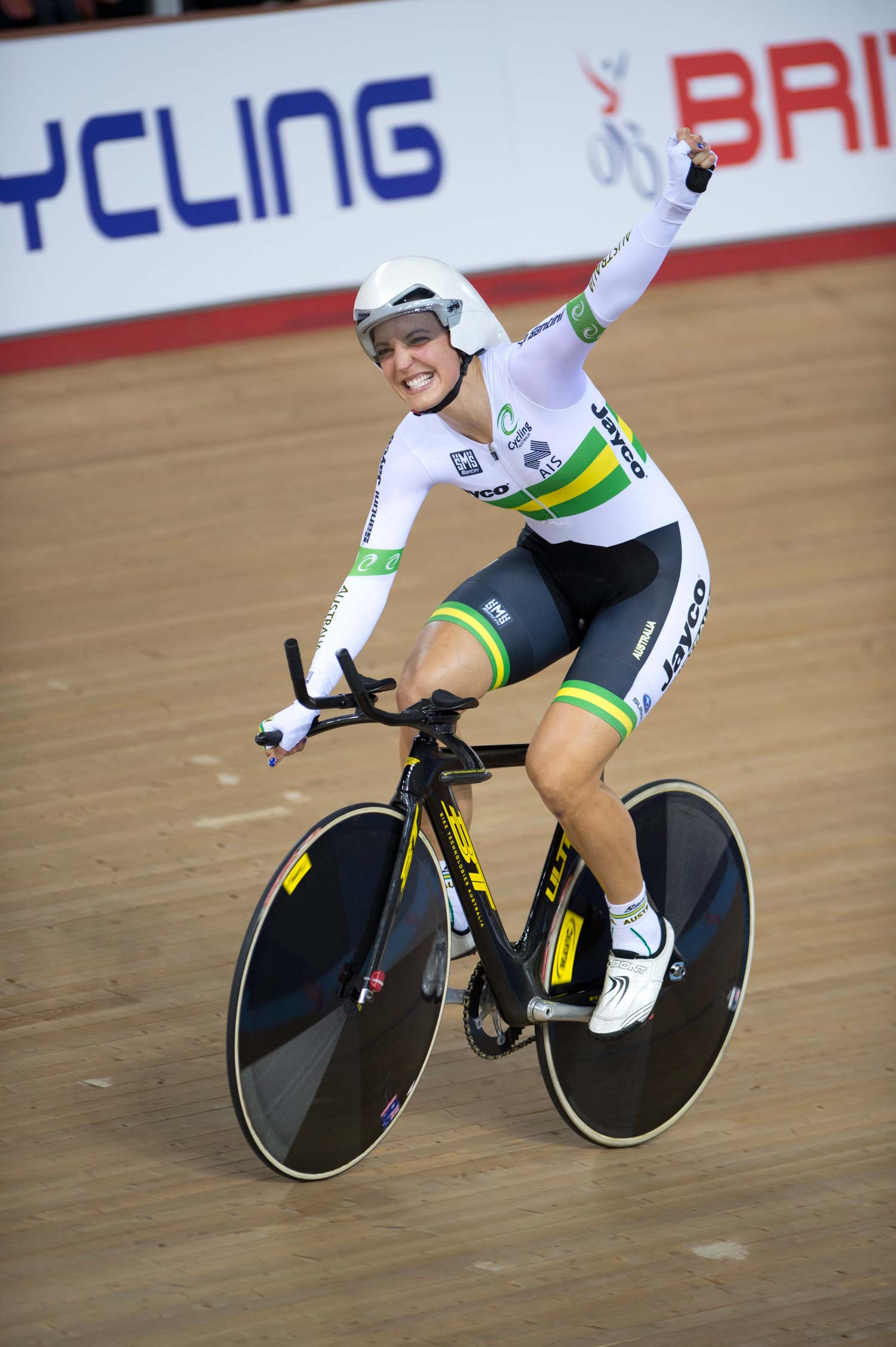 Click the Soundcloud file to listen to the discussion and/or read the transcript below.

RIDE: I’m talking with Rebecca ‘Wee-ah-zack’… is that how I say your name?

“The announcers always get it wrong anyway… but we know who you’re talking about.”

We’ve got that cleared up – and she is the two-time individual pursuit world champion. She’s back from London after a bit of a whirlwind trip, I’d imagine. How was it all for you? It was an amazing championships from afar, what was it like being there?

“It was a fantastic experience. I think it’s such an honour to be selected and there’s so much depth in women’s track endurance cycling so for me [the] biggest challenge is always just making it onto the Australian team to race these major championships.

Last year you came in as [something] of a wildcard almost, wasn’t it?

“Absolutely. I still feel so inexperienced on the track so I think I still have that hunger and that passion and that drive.

“Last year Bella King was unfortunately unwell leading into selection and I was kind of the last rider selected. And then again this year…

“I feel like I just get in by the skin of my teeth.

“Every time there’s a selection made it’s just matter of doing everything right and making sure that you stay healthy, injury-free and do enough to make sure the selectors know that you’re still there.” 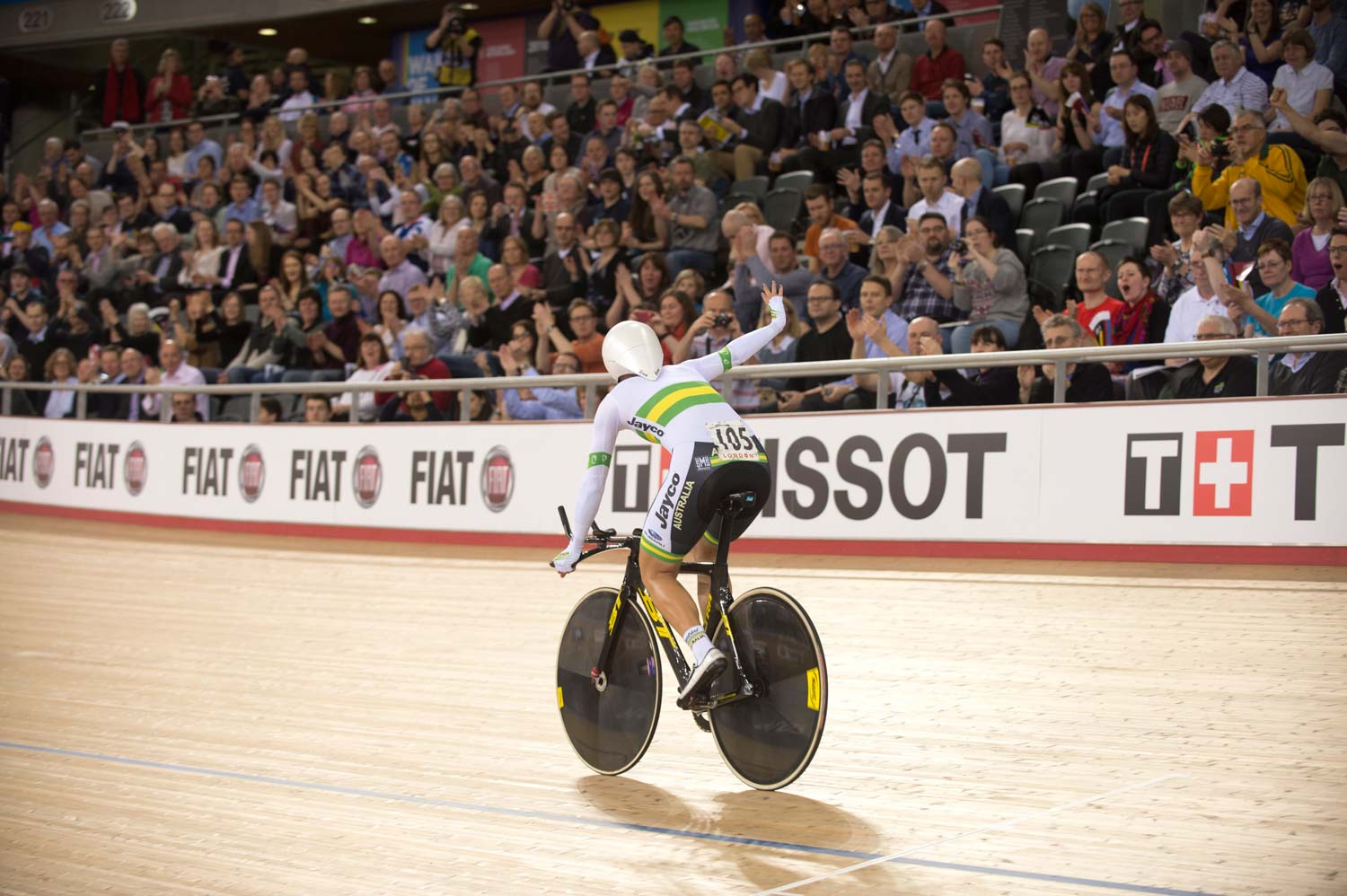 And you [got] to ride the teams [pursuit] this year, which you didn’t last year. Is that right?

“Yeah. It was my first time racing the teams pursuit at a world championship.

“I got called up for the final. Obviously Nettie Edmondson had had a pretty challenging couple of weeks leading into the worlds – she collided with a car and she rode the qualifying and the first round and then they rested her for the omnium because she had a title to try and defend as well.

“I was pretty excited to get called up. Then I obviously didn’t get enough sleep the night of my individual pursuit final and I wasn’t feeling great the next day… and, sure enough, got sick the morning of the teams pursuit.

“I wasn’t personally happy with my contributions to the team.

“We were racing against Italy and so we knew that we had quite a big buffer and more than likely we would be able to catch our opponents after about three kilometres, so we went into like it was a 3k event… I had a couple of solid turns but I still have a lot of elements to work on in the teams pursuit, specifically the technical side which – as an older athlete coming into the sport a lot later – I didn’t acquire all of those skills as a junior like everybody else…

“It’s something that I constantly have to work on and I do a lot of work with Alex Bird who is our starts expert at the high performance unit based in Adelaide.

“It definitely keeps me passionate in the sport and very hungry to succeed.”

“Absolutely. That was so exciting.

“We weren’t able to watch it live; we watched it on tellie from the hotel room with some of the men’s sprinters and it was so exciting – they’re such a youthful squad and they’ve still got 10 riders vying for five positions at the Olympics. So it’s going to be a very interesting couple of months ahead across all of the disciplines…” 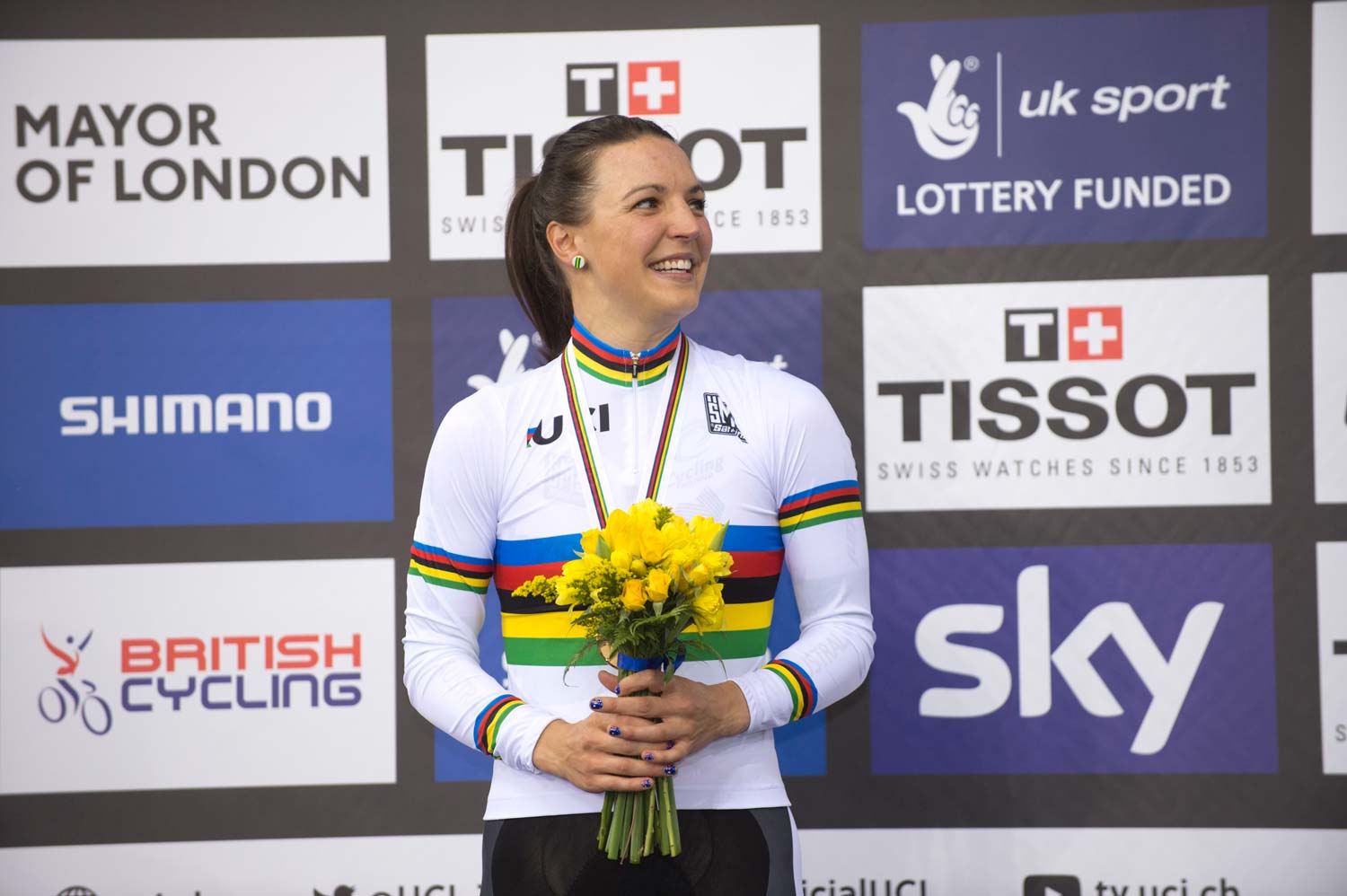 A large part of the commentary from world championships in an Olympic year is what’s going to happen later in the year. It’s almost disappointing given that the worlds are actually, as far as track meets go, they’re far more compelling than what the Olympics are – with a greater program…

“Yeah… there are a larger number of medals up for grabs at the world championships and it is a large break – there’s potentially, for us, no competition between now and the Olympics. But the focus for our sport – and with the ‘Australian Winning Edge’ program – everything is based towards the Olympics.

“That’s always been our focus. We’re still aiming for gold at the Rio Olympics, whatever combination of riders gets selected and we’ve definitely got the right people around us: the coaching, the support staff…

“We’ve ticked the world champs off and now it’s off to the next goal.”

I know there’s a good team atmosphere and there’s a fairly decent amount of camaraderie but does it feel a bit competitive because there are limited spots for the team pursuit? [The women’s coach, Gary Sutton, explained to RIDE that there are still six women vying for the five places that exist for the Rio Games.]

“Yeah definitely. This year definitely feels different to previous years where you’re just vying for selection in the Commonwealth Games or the world championships – but, knowing that everything works in Olympic cycles, you’re committed to a four-year period. And there are girls who have already decided that they’ll be retiring after the Olympic Games so that’s their end goal. But for me I’ve only been part of the program for three years and have only been track cycling for four.

“I was pretty new to it when the Olympics happened last time around and I’d love to go to Tokyo [in 2020] so I feel that if it doesn’t happen this time I’ll be one of the senior, more experienced riders in four years times.

“I guess it depends on where everybody is at in their careers, how they deal with it mentally in terms of selection and those associated things.”

So you ended up with fourth in the teams, is that correct?

Okay. So not even a chocolate medal. And it must be a bit of a frustration when you consider the elation of last year in Paris when the team won and set a world record…

“Yeah, it was definitely a different emotion this time.

“Obviously you go to the world championships wanting to win and we did our last training session in Adelaide in the rainbows and we all kind of said, ‘This is the last time in rainbows…’ but you know that at some point in your career you’d like to emulate that and I’m very privileged to get to ride around in rainbows for another year.

“But we feel that we had more to give this year in London and hopefully we can turn things around before Rio.” 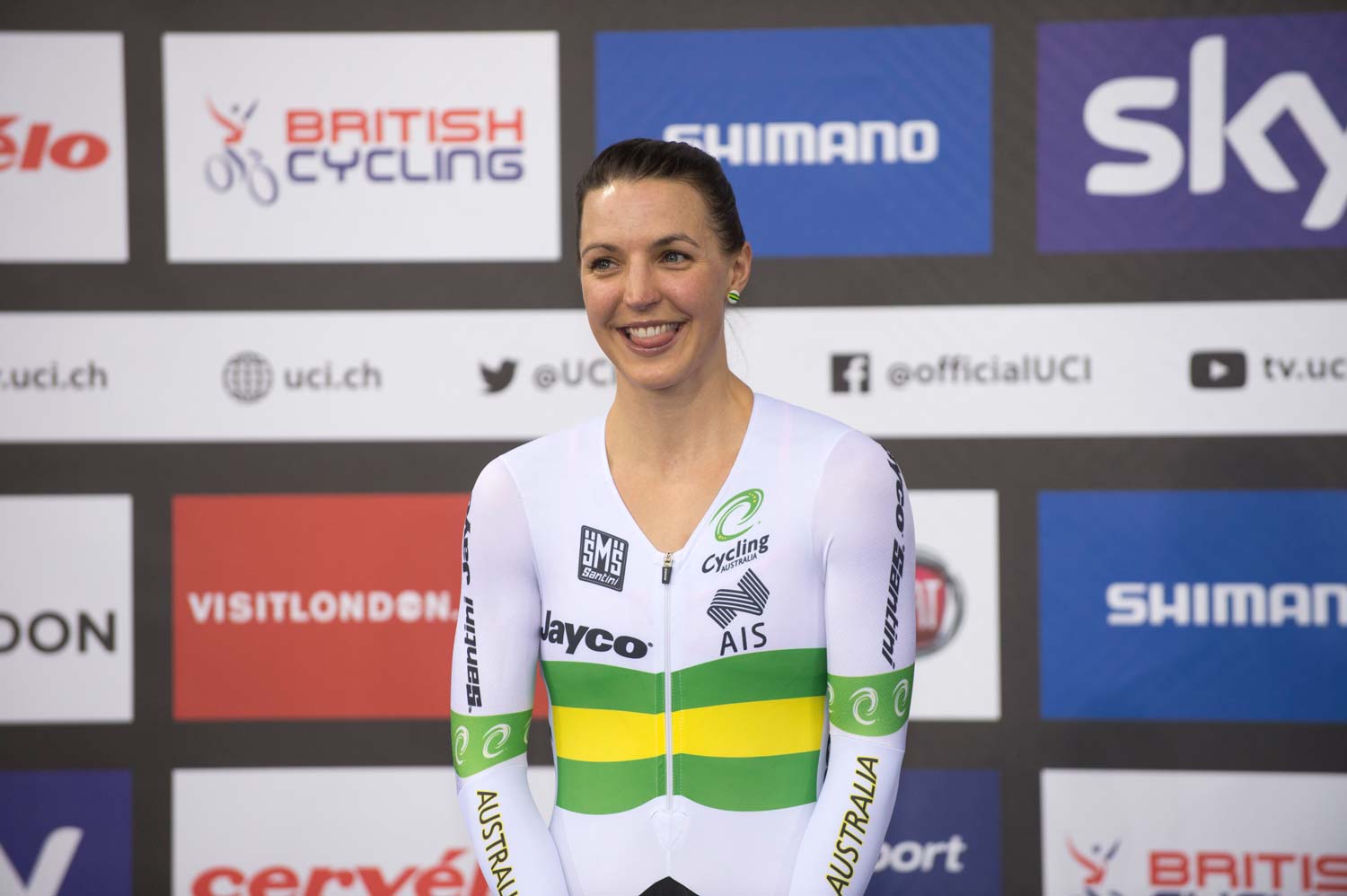 In the preamble, before going on-the-record, you said that you weren’t racing at all for a time in the individual; you just had a strategy and you caught the Polish girl… or you had her in your sights – and you knew that you had it covered, you had the race won. Does that mean it was a formality, the individual?

“Ah, the individual… with the scheduling this year it was kind of fortunate for me and unfortunate in a way because I’m trying to get into the teams pursuit but the IP was first day, first night. And I was the reserve in the TP.

“Our coaching staff and Gary Sutton said I was able to do the individual pursuit. And [as defending champion] I was the last in qualifying. I knew exactly what time I had to do.

“I felt fairly comfortable in qualifying. I had a three-second buffer, so I went in knowing what I had to do. I did that. And then, for the final, you’re not quite sure with unknown opponents what they’re capable of.

“But I knew that I felt comfortable in qualifying and so it was just a matter of going through the process and staying focussed. Just going in with a goal.

“Sutto’ was walking the line [dictating the pace Rebecca needed to hold] just being comfortable and relaxed and then, once I had [Malgorzata Wojtyra] in my sights I was able to enjoy the last five laps knowing that, as long as I stayed on my bike, I’d be fine.

“We trained incredibly hard leading into the championships so I knew I had more in the tank if it was required but fortunately it wasn’t.”

So you end up against a Polish girl in the final. How different would it have been if… oh, there are so many hypotheticals… but if the individual [pursuit] was still an Olympic event and you had the likes of Dani King or Joanna Rowsell or someone to race against – in London…?

“Yeah, because the teams pursuit is the focus all the nations were resting their top teams pursuiters for the following day’s competition. It all depends on the scheduling and last year it was the last event and I wasn’t required for the TP so I could give it everything… but definitely the TP is what every country is focussed on and you can tell even [from] the numbers [of] the people that went to the world championships – lots of countries were missing because they hadn’t qualified enough points to even go to the Olympics.

“So they don’t spend the money going to these major competitions because the Olympics, for most of these countries, is the end game.”

“Yeah, I guess you could look at it like that.”

You, obviously, didn’t go to London for the [Olympic] Games. What’s your expectation if you do go down to Brazil and have a go in Rio?

“I haven’t really given it too much thought. I definitely live my life a day at a time: I know that I’ve got gym in an hour’s time… what I have to do riding wise.

“I have to look forward to tomorrow but I am just ticking off the goals as they come and not thinking too far ahead, knowing that in elite sport – and definitely in cycling – things can change so quickly.

“That’s always been the goal and that’s there but I try not to give it too much thought knowing that there’s still so many other things that I have to achieve before I’m even given an opportunity to think about that.”

It’s a confusing couple of months coming up but I’ll let you get ready for your gym session. Thanks for having a chat and congrats on another rainbow jersey: we are impressed in our little office, we cheer you on and we enjoy watching you ride. And all the best for the quest to be part of The Team.

“Yeah, we need to get everyone to keep their fingers crossed…”

*The surname has Polish origins and, as Rebecca explains, “Dad says it’s actually pronounced ‘Vee-ahn-sak’ but we’ve ended up saying it how we do…” 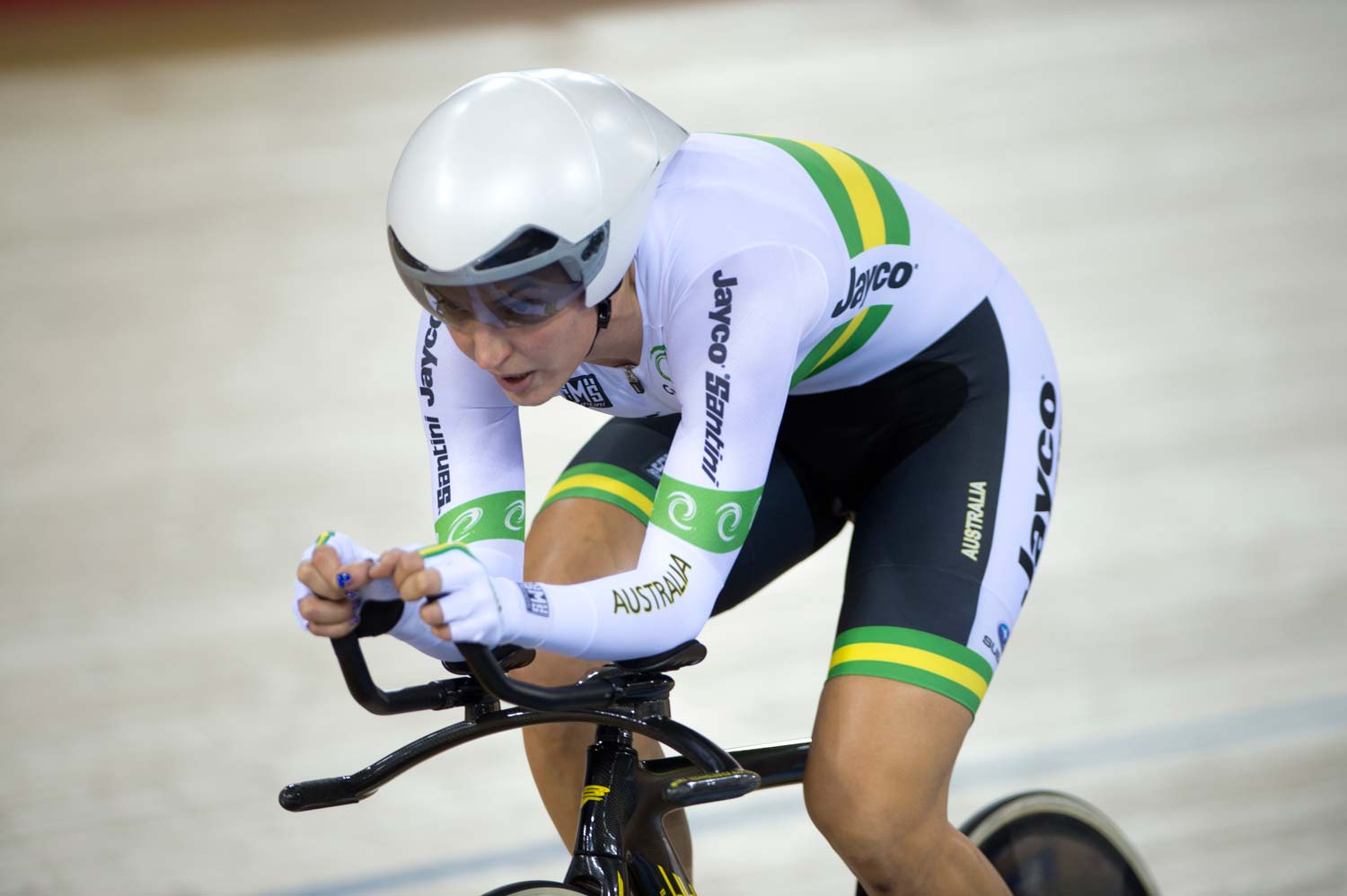