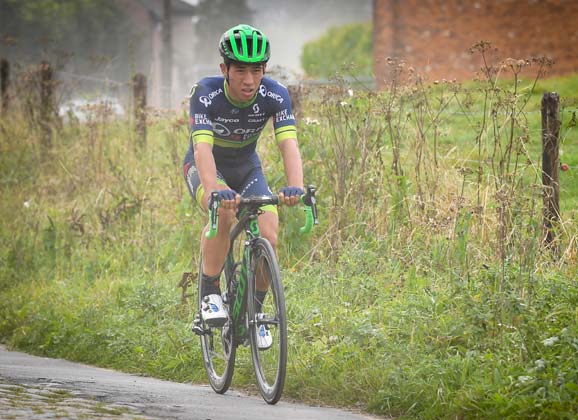 The worlds are getting closer. Qatar is calling and although it’s late in September, there are still a few weeks to go before the races for rainbow jersey are on again. But thoughts are already on what may come from what is always a compelling competition.

Cycling Australia announced it’s line-up(s) for the championships – from 9-16 October – last week. It’s clear that there are several riders in contention for a medal.

Originally part of the line-up of nine for the Australian team, Adam Hansen has ruled himself out of the 2016 world championships.
Photo: Yuzuru Sunada

Australia: back in the hunt – but without the support of Adam Hansen

The final event of the championships is the elite men’s road race and Australia boasts the runners-up from 2014 and 2015 with Simon Gerrans and Michael Matthews, respectively.

Given that it’s an Olympic year and that the worlds are to be contested in the Middle East for the first time, there’s an alteration to the traditional dates. Instead of coming soon after the Vuelta a España, there’s quite a lag in 2016. There’s five weeks between the final stage of the Spanish Grand Tour and the elite men’s road race in Qatar.

Already, this delay has seen a change to the original line-up.

Adam Hansen was part of the original Australian selection but he’s ruled himself out of the championships and a decision on his replacement is yet to be made.

RIDE recently caught up with the coach of the national team, Brad McGee, to get his thoughts on what we can expect in Qatar.

(Below is a full transcript of the interview with Brad McGee.*)

Runner-up in 2015, Michael Matthews will be back in the green and gold jersey in Qatar next month. He is one of two protected riders for the Aussie team along with Caleb Ewan.
Photo: Yuzuru Sunada

RIDE: I’m talking with Brad McGee and it’s a Friday afternoon a couple of weeks out from the world championships in Qatar. We know the team selections and I think that there’s every reason for Australian cycling fans to be optimistic. What do you make of it?

Brad McGee: “What we’ve seen in recent campaigns is that Australia has always got a legitimate claim on the title. There was a healthy long squad and then came the announcement of the final team.

“This year there’s been a particular challenge because it’s so late in the season, and it’s on a flat course that’s likely to be windy.

“It was always going to be a challenge to get a full line-up of fit and able bike riders.

“We do, although I can let you know we have Adam Hansen unable to make it all the way to Doha. I’m currently actively searching for a replacement.

“I’m not surprised. I expected a few more [withdrawals] and I’ve still got my fingers crossed all the way in until we land in Doha ready to race. I think this season in particular will be challenging just to get the full list of nine riders on the start line fit and healthy and roaring ready to go.”

What’s Adam’s reason for forfeiting his place? Can you explain that?

“I don’t want to give any details. It was just a decision that needs to be made and I’ve got to respect it and support him – and we look forward to seeing Adam back fighting fit for next season.

“As far as the national program goes for Adam, he’s always welcome and he’s a true cornerstone of any operation for Australian cycling.”

That’s a big hole. I think a lot of people were looking forward to seeing him. [Adam] is a big crowd favourite. What sort of character do you imagine stepping into his role?

“We’re looking for big, strong bike riders with a good sense of purpose in the bunch and that’s because positioning is going to be vital when the wind starts to blow.

“So those riders that carry that aura – those who command respect in the bunch – and unfortunately they’re very thin across the whole peloton really. For a national team to have a couple of them, means you’d be doing very well.

“Look, you can’t replace Adam Hansen. Is a disappointment but, like I said, we’ve got to support and understand his decision and just look forward to next year when it comes to Adam.”

“We’ve got a few names on our reserve list. The things to be considered are: who is riding the team time trial; and who is racing right through to the end of the season with purpose in race like Abu Dhabi or the Japan Cup.

“It’s beyond any athlete really just to continue on for the final three or four weeks of the season all for one race. It doesn’t do justice to the athlete, the team, or the nation they’re trying to represent.

“I suppose I’ve still got a bit of work to do on that one.”

Caleb Ewan was caught up in a crash in stage four of the Eneco Tour but he is one of many who are making the 2016 season a long one as he prepares to contest his first worlds in the elite category…
Photo: Graham Watson

Let’s go straight to the leadership role. You’ve got a two-pronged attack – which is not anything new to the McGee Director role. You’ve had a similar approach the last couple of years. What do you make of the collaboration with Michael Matthews and Caleb Ewan? Are they going to function well together?

“Lessons have been learned from recent campaigns.

“We get in early and have those conversations but that being said, I’m not rushing into any decision until we’ve at least received the results of the remaining races in the lead-up.

“Obviously Michael is a proven contender. We know he goes the distance. We know he handles the heat well. In any given world championships, he’s got the talent to play for the title – regardless of the parcours.

“Caleb is a new recruit (to the elite team), he’s on the rise. He’s still got a lot to prove but I can tell you right now: he’s delivering on all those key components that were put in front of him. And he goes into these worlds as a protected rider for good reason.

“There’s still a long way to go and we’ll just keep monitoring both riders and the team around them.

“Like I said from the outset: we’ve learnt our lesson in the past and it’s about getting in early and having those conversations as early as possible to make sure everyone is clear and on board with the final decision.”

Luke Durbridge has won the TT gold medal at the worlds as a junior and under-23 and, in 2016, he’ll be one of the two Australians doing the TT in Qatar (along with Rohan Dennis).
The plan is for Durbridge to also back up for the road race…
Photo: Yuzuru Sunada

I’m going to come from left-field and remind you that in stage seven in the Tour de France of 2002, there was a stage that was slated for the sprinters and a guy called Brad McGee burst forward with a kilometre to go and spoiled the party. Instead of leading out Baden Cooke, he went for the win himself… and won. Is there any temptation to perhaps work with Heinrich Haussler – who has been formidable at a couple of very successful worlds campaigns – and have him as a second-tier leader?

“We’ve given a lot of consideration to the riders and the style of rider we are looking to have there.

“Haussler is one. Mark Renshaw is a notable other who would work well on this course.

“What’s going to be important is to use the riders who are quite dynamic and able to fulfil different roles.

“We really don’t know what style of race it’s going to be. It could be an absolute dogfight from kilometre zero to the finish if that wind blows as we expect it to; if it doesn’t, or for any other reason the race is shut down, it can be a very different outcome at the finish.

“So to have riders who are creative, dynamic and flexible is going to be key.

“Haussler, as you mentioned, he fits that role.”

People who are reading this might be curious about the omission of Simon Gerrans. My understanding is that he was never in consideration for Qatar. Is that correct?

“Yes, that’s correct. It was never on Simon’s agenda or ours in the national program.

“We look forward to seeing Simon at full strength again next year and we’ll be supporting his ambitions as long as his level of performance is kept at the highest level. We always welcome Simon into the national program but it was a little bit course specific – you know, horses for courses?”

Finally, just to conclude this little preview of the worlds. Coming so late in the season, apart from the injury concerns and the ability of a rider to sustain their form for so long, do you like an October world championships or do you think it should be closer to the Vuelta?

“I don’t believe this timeslot is sustainable in terms of getting the maximum leverage from our top cyclists at the worlds. I think all nations are facing the same challenges as we are.

“It just seems like the season is losing momentum and we’re just holding on. And that’s no way to respect a fight for the rainbow jersey at all.”

*Note: Ordinarily we also post the audio file of interviews such as this but McGee was driving and the recording is rather rank.