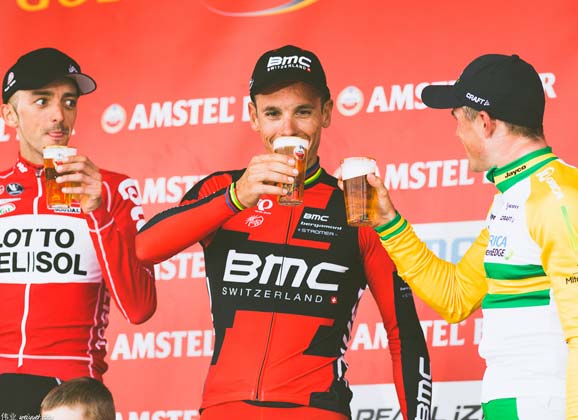 Watch it on the television and you find yourself leaning into the lounge chair: left, right, left, left, right… and onward. Up, down, around and around the province of Limburg the route takes the peloton showing off the best Dutch hills available for cycling. The Amstel Gold Race: sponsored by a beer and named that way since its inception in 1966 when Jean Stablinski won the title. Once again it was the Master of the Cauberg, Philippe Gilbert who beat everyone to the line. It’s his third win in the Dutch race which is contested on a course that is similar to the world championships in Valkenburg in 2012 when… yep, Gilbert was the winner.

Here is a gallery of 28 images by Wei Yuet Wong from the day ‘Phil Gil’ beat Jelle Vanendert and Simon Gerrans. (Click the photo of the trio on the podium to begin the slideshow.)

Seeing the Classics: a new perspective

“I went to the start, and then to Valkenburg, and walked up and down the Cauberg. And was at the finish. Guess the Amstel Gold seems like the odd one among the major spring Classics. It’s the youngest one – this is only the 49th edition… and it’s the only one in the Netherlands. But, it is still a tough race at over 250km, with 34 climbs. Riders were shaking with exhaustion at the finish. The start list is also impressive, with three current world champions – Rui Costa (road), Tony Martin (TT), and Matej Mohoric (U23 road). However, the win went to a former world champion who looks to be finding the correct form again after a relatively disappointing 2013. There were some riders whom I thought would go well, but didn’t, like Carlos Betancur, Rui Costa, and Alejandro Valverde. Michal Kwiatkowski was my pick, but he didn’t come in top three, but still made a good ride. I have also included a selection of Simon Gerrans for your Australian audience…”