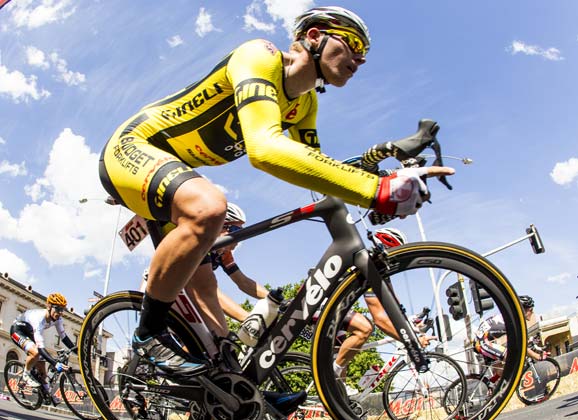 As the Tour of the Great South Coast progresses, we’re getting to see more and more of the talented sprinter Jesse Kerrison of the Budget Forklifts team. RIDE profiled the young star at the beginning of the year with a piece written by Jonathan Lovelock. Yesterday he won the second stage and took the leader’s jersey, holding a six second advantage over another star of the Australian scene Brenton Jones from Avanti Racing. With this in mind, we thought it was a good time to post an online version of the profile piece that was originally published in RIDE #63 (February 2014). 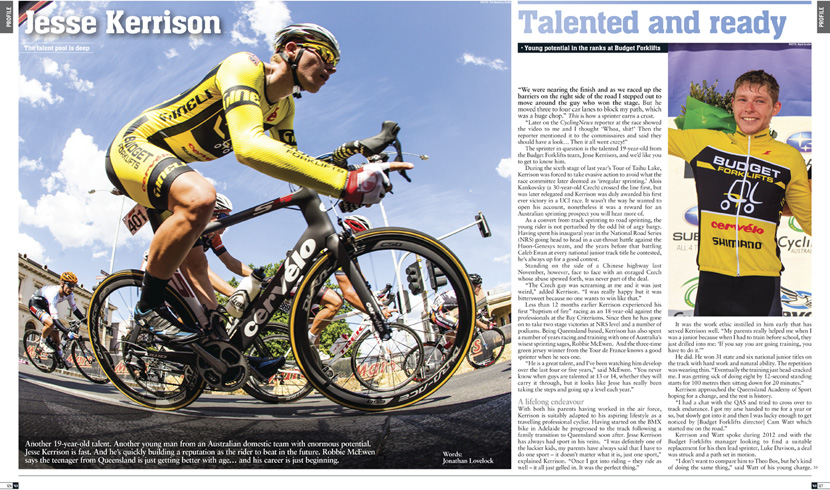 Young potential in the ranks at Budget Forklifts

Another 19-year-old talent. Another young man from an Australian domestic team with enormous potential. Jesse Kerrison is fast. And he’s quickly building a reputation as the rider to beat in the future. Robbie McEwen says the teenager from Queensland is just getting better with age… and his career is just beginning.

“We were nearing the finish and as we raced up the barriers on the right side of the road I stepped out to move around the guy who won the stage. But he moved three to four car lanes to block my path, which was a huge chop.” This is how a sprinter earns a crust.

“Later on the CyclingNews reporter at the race showed the video to me and I thought ‘Whoa, shit!’ Then the reporter mentioned it to the commissaires and said they should have a look… Then it all went crazy!”

The sprinter in question is the talented 19-year-old from the Budget Forklifts team, Jesse Kerrison, and we’d like you to get to know him.

During the sixth stage of last year’s Tour of Taihu Lake, Kerrison was forced to take evasive action to avoid what the race committee later deemed as ‘irregular sprinting.’ Alois Kankovsky (a 30-year-old Czech) crossed the line first, but was later relegated and Kerrison was duly awarded his first ever victory in a UCI race. It wasn’t the way he wanted to open his account, nonetheless it was a reward for an Australian sprinting prospect you will hear more of.

As a convert from track sprinting to road sprinting, the young rider is not perturbed by the odd bit of argy bargy. Having spent his inaugural year in the National Road Series (NRS) going head to head in a cut-throat battle against the Huon-Genesys team, and the years before that battling Caleb Ewan at every national junior track title he contested, he’s always up for a good contest.

Standing on the side of a Chinese highway last November, however, face to face with an enraged Czech whose abuse spewed forth, was never part of the deal.

“The Czech guy was screaming at me and it was just weird,” added Kerrison. “I was really happy but it was bittersweet because no one wants to win like that.”

Less than 12 months earlier Kerrison experienced his first “baptism of fire” racing as an 18-year-old against the professionals at the Bay Criteriums. Since then he has gone on to take two stage victories at NRS level and a number of podiums. Being Queensland based, Kerrison has also spent a number of years racing and training with one of Australia’s wisest sprinting sages, Robbie McEwen.  And the three-time green jersey winner from the Tour de France knows a good sprinter when he sees one.

“He is a great talent, and I’ve been watching him develop over the last four or five years,” said McEwen. “You never know when guys are talented at 13 or 14, whether they will carry it through, but it looks like Jesse has really been taking the steps and going up a level each year.” 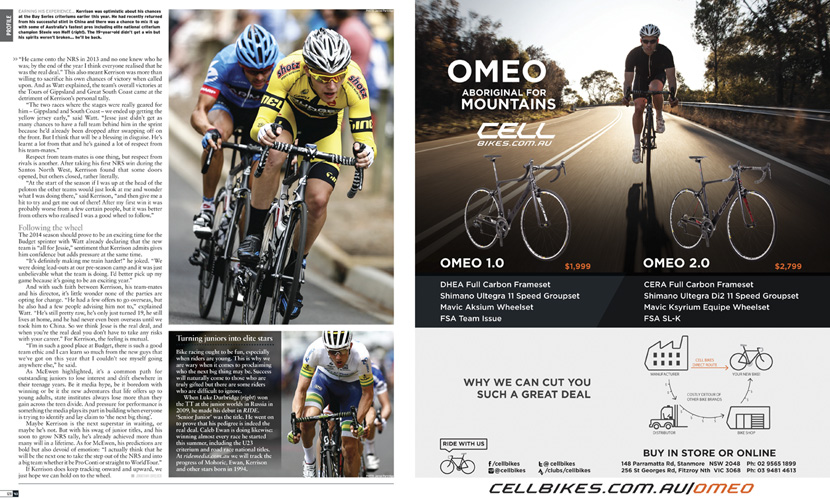 With both his parents having worked in the air force, Kerrison is suitably adapted to his aspiring lifestyle as a travelling professional cyclist. Having started on the BMX bike in Adelaide he progressed to the track following a family transition to Queensland soon after. Jesse Kerrison has always had sport in his veins.  “I was definitely one of the luckier kids, my parents have always said that I have to do one sport – it doesn’t matter what it is, just one sport,” explained Kerrison. “Once I got into riding – they ride as well – it all just gelled in. It was the perfect thing.”

It was the work ethic instilled in him early that has served Kerrison well. “My parents really helped me when I was a junior because when I had to train before school, they just drilled into me: ‘If you say you are going training, you have to do it.’”

He did. He won 31 state and six national junior titles on the track with hard work and natural ability. The repetition was wearing thin. “Eventually the training just head-cracked me. I was getting sick of doing eight by 12-second standing starts for 100 metres then sitting down for 20 minutes.”

Kerrison approached the Queensland Academy of Sport hoping for a change, and the rest is history.

“I had a chat with the QAS and tried to cross over to track endurance. I got my arse handed to me for a year or so, but slowly got into it and then I was lucky enough to get noticed by [Budget Forklifts director] Cam Watt which started me on the road.”

Kerrison and Watt spoke during 2012 and with the Budget Forklifts manager looking to find a suitable replacement for his then lead sprinter, Luke Davison, a deal was struck and a path set in motion.

“I don’t want to compare him to Theo Bos, but he’s kind of doing the same thing,” said Watt of his young charge. “He came onto the NRS in 2013 and no one knew who he was; by the end of the year I think everyone realised that he was the real deal.” This also meant Kerrison was more than willing to sacrifice his own chances of victory when called upon. And as Watt explained, the team’s overall victories at the Tours of Gippsland and Great South Coast came at the detriment of Kerrison’s personal tally.

“The two races where the stages were really geared for him – Gippsland and South Coast – we ended up getting the yellow jersey early,” said Watt. “Jesse just didn’t get as many chances to have a full team behind him in the sprint because he’d already been dropped after swapping off on the front. But I think that will be a blessing in disguise. He’s learnt a lot from that and he’s gained a lot of respect from his team-mates.”

Respect from team-mates is one thing, but respect from rivals is another. After taking his first NRS win during the Santos North West, Kerrison found that some doors opened, but others closed, rather literally.

“At the start of the season if I was up at the head of the peloton the other teams would just look at me and wonder what I was doing there,” said Kerrison, “and then give me a hit to try and get me out of there! After my first win it was probably worse from a few certain people, but it was better from others who realised I was a good wheel to follow.”

The 2014 season should prove to be an exciting time for the Budget sprinter with Watt already declaring that the new team is “all for Jessie,” sentiment that Kerrison admits gives him confidence but adds pressure at the same time.

“It’s definitely making me train harder!” he joked. “We were doing lead-outs at our pre-season camp and it was just unbelievable what the team is doing. I’d better pick up my game because it’s going to be an exciting year.”

And with such faith between Kerrison, his team-mates and his director, it’s little wonder none of the parties are opting for change. “He had a few offers to go overseas, but he also had a few people advising him not to,” explained Watt. “He’s still pretty raw, he’s only just turned 19, he still lives at home, and he had never even been overseas until we took him to China. So we think Jesse is the real deal, and when you’re the real deal you don’t have to take any risks with your career.” For Kerrison, the feeling is mutual.

“I’m in such a good place at Budget, there is such a good team ethic and I can learn so much from the new guys that we’ve got on this year that I couldn’t see myself going anywhere else,” he said.

As McEwen highlighted, it’s a common path for outstanding juniors to lose interest and drift elsewhere in their teenage years. Be it media hype, be it boredom with winning or be it the new adventures that life offers up to young adults, state institutes always lose more than they gain across the teen divide. And pressure for performance is something the media plays its part in building when everyone is trying to identify and lay claim to ‘the next big thing’.

Maybe Kerrison is the next superstar in waiting, or maybe he’s not. But with his swag of junior titles, and his soon to grow NRS tally, he’s already achieved more than many will in a lifetime. As for McEwen, his predictions are bold but also devoid of emotion: “I actually think that he will be the next one to take the step out of the NRS and into a big team whether it be Pro Conti or straight to WorldTour.”

If Kerrison does keep tracking onward and upward, we just hope we can hold on to the wheel.