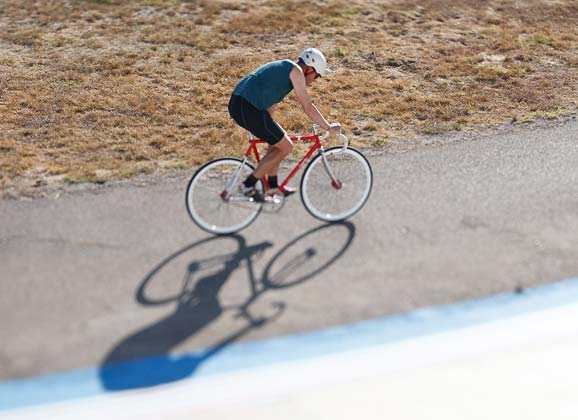 We are revisiting the ‘Our Surrounds’ theme from an issue of RIDE published a few years ago. Here is part two, a photo essay from the San Diego Velodrome by Mark Johnson.

This was first published in January 2011. Click the image below to start the slideshow…

The San Diego Velodrome is one of my favourite places to photograph cycling. That’s saying something in a place with more than 100km of Pacific-clad coast, cloud-piercing mountains and a rugged desert landscape that possesses nearly a third of the region’s space. Among this, how can a concrete ditch have such appeal? Because those cyclists going in circles represent all that’s right with the world.

Almost every day the velodrome hosts races or classes. And the lessons book quickly, filled with kids who put down the game controller, adults who put a comma around frantic schedules, and 20-somethings who could well be sitting at the pub or baseball park. San Diego’s velodrome is an antidote to the cynicism that can’t but creep up on anyone with the wit to read a newspaper.

The track’s very existence and the continued arrival – year after year – of people who gather to stretch themselves betokens the triumph of our better selves.

On Fridays the track hosts races. Riders filtering in round 5.00pm. Tossing down gear bags that far outweigh the gossamer track machines on their shoulders, smiles crack at the sight of buddies. Battles set off long before the pistol cracks, as each cagily downplays or piles on to the week’s training regime.

Seen through a 300mm telephoto, fugitive moments spin novelistic narratives, stories more interesting than the order across the line: raised eyebrows, flying slobber, a hand lightly placed on a hip – “I’m here, mate.” Quiet communication courses through the field as it whirs, wanes and crescendos with the rhythms of racing.

Once the sun sets, hipsters filter into the wooden bleachers overlooking the track. Laden with beer-filled messenger bags, they roll in from North Park and Hillcrest, nearby communities that gaily express the diversity of our mongrel country. Nodding hello to the gents cooking chicken and beef at a trackside taco stand, they lean clusterless bikes against the velodrome railing, a structure itself clad in black French drain pipe. Cracking cold ones, the pierced and tatted hipsters look on, studied insouciance glazing underlying awe.

This place is where their lovingly constructed single speeds belong. Their brakeless, gear-hobbled track bikes are wholly impractical on San Diego’s hilly, traffic-clotted terrain. Fanning these bikes along the precipice of the velodrome is like putting koalas from the nearby zoo on a plane and flying them over Australia – so close to where they belong, but forever away from home.

Yes, you can see the (justly named) World Famous San Diego Zoo from the velodrome. It rests on land across a canyon that, like all of Balboa Park, was set aside for recreation in the city’s earliest days. First in 1835 as a 19,000-hectare Mexican government preserve, later as a huge park city fathers surveyed in 1868. They saw wisdom in a space in the city’s urban centre where citizens could commune with open land and sky.

The fact that, 175 years after the initial altruistic impulses, cyclists are here, building rapport with nature, both inside themselves and as it surrounds them in the cooling night air, brings joy, especially when I see the 10 and 12-year-old kids giving it their all. While parents might watch anxiously from the apron, those kids are set free. The pain in their expressions, the elation of victory. Is she of flying pigtails the modern form of Jeannie Longo? Is that lad Lance in the rough?

And all this luminance has a non-metaphorical partner.

The white concrete bounces light. In the daylight the track is a giant fill card, tracing cheekbones and hubs with reflected sun. Legs revolving, riders paddle like swans through the incandescence. “The invariable mark of wisdom,” American philosopher Ralph Waldo Emerson writes, “is to see the miraculous in the common.”

Bikes going round, bathed in light in a place set aside for the recreation of self. Miraculous indeed.

– By Mark Johnson (in San Diego)