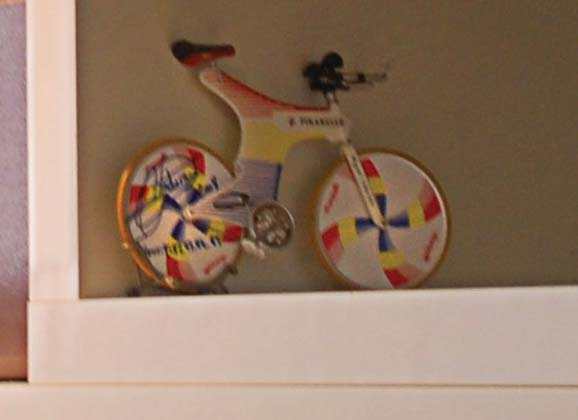 Our Surrounds – the joy of mobility

Towards the end of production, this feature from the first issue of 2011 spring to mind. Rob Arnold explains the influence of cycling on him and his surrounds. It was part of a series of stories about people around the world and their association with the bike from RIDE #51. Listening to Billy Bragg’s gorgeous Tank Park Salute recently reminded Arnold about this story. Now aged 72, Aaldrik Arnoldus is still living in Casino with his wife. He still can’t walk or talk, but he is happy…

This is a flashback by Rob Arnold from 2011… 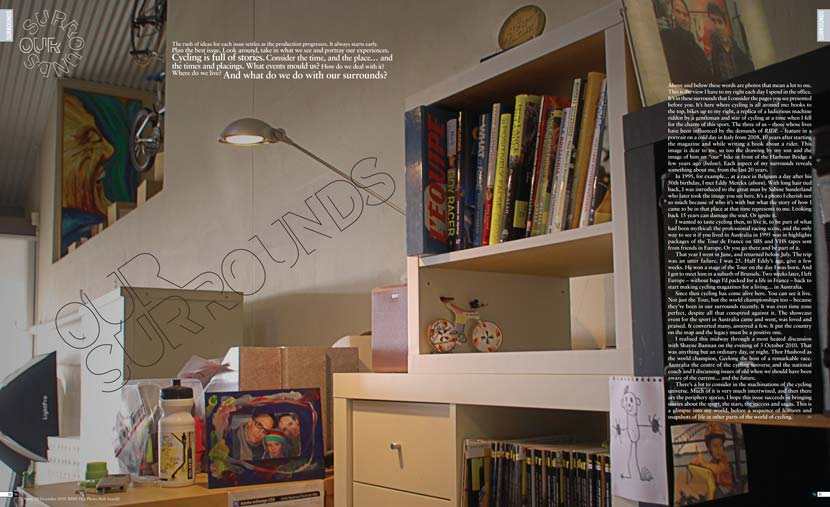 The rush of ideas for each issue settles as the production progresses. It always starts early. Plan the best issue. Look around, take in what we see and portray our experiences. Cycling is full of stories. Consider the time, and the place… and the times and placings. What events mould us? How do we deal with it? Where do we live? And what do we do with our surrounds?

Above and below these words are photos that mean a lot to me. This is the view I have to my right each day I spend in the office. It’s in these surrounds that I consider the pages you see presented before you. It’s here where cycling is all around me: books to the top, bikes up to my right, a replica of a ludicrious machine ridden by a gentleman and star of cycling at a time when I fell for the charm of this sport. The three of us – those whose lives have been influenced by the demands of RIDE – feature in a portrait on a cold day in Italy from 2008, 10 years after starting the magazine and while writing a book about a rider. This image is dear to me, so too the drawing by my son and the image of him on “our” bike in front of the Harbour Bridge a few years ago. Each aspect of my surrounds reveals something about me, from the last 20 years. 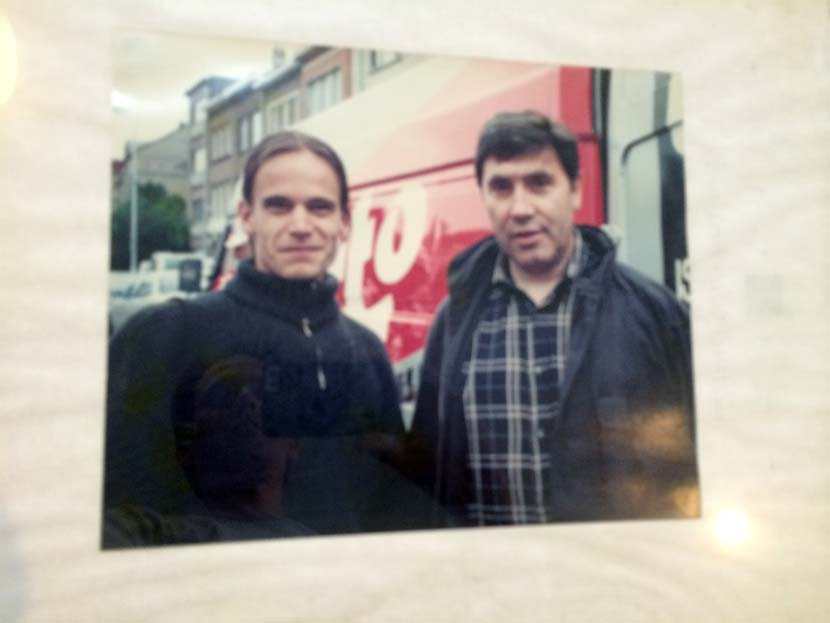 In 1995, for example… at a race in Belgium a day after his 50th birthday, I met Eddy Merckx (above). With long hair tied back, I was introduced to the great man by Sabine Sunderland who later took the image you see here. It’s a photo I cherish not so much because of who it’s with but what the story of how I came to be in that place at that time represents to me. Looking back 15 years can damage the soul. Or ignite it.

I wanted to taste cycling then, to live it, to be part of what had been mythical: the professional racing scene, and the only way to see it if you lived in Australia in 1995 was in highlights packages of the Tour de France on SBS and VHS tapes sent from friends in Europe. Or you go there and be part of it.

That year I went in June, and returned before July. The trip was an utter failure. I was 25. Half Eddy’s age, give a few weeks. He won a stage of the Tour on the day I was born. And I got to meet him in a suburb of Brussels. Two weeks later, I left Europe – without bags I’d packed for a life in France – back to  start making cycling magazines for a living… in Australia.

Since then cycling has come alive here. You can see it live. Not just the Tour, but the world championships too – because they’ve been in our surrounds recently. It was even time zone perfect, despite all that conspired against it. The showcase event for the sport in Australia came and went, was loved and praised. It converted many, annoyed a few. It put the country on the map and the legacy must be a positive one.

I realised this midway through a most heated discussion with Shayne Bannan on the evening of 3 October 2010. That was anything but an ordinary day, or night. Thor Hushovd as the world champion, Geelong the host of a remarkable race. Australia the centre of the cycling universe and the national coach and I discussing issues of old when we should have been aware of the current… and the future.

There’s a lot to consider in the machinations of the cycling universe. Much of it is very much intertwined, and then there are the periphery stories. I hope this issue succeeds in bringing stories about the sport, the stars, the success and sagas. This is a glimpse into my world, before a sequence of features and snapshots of life in other parts of the world of cycling. 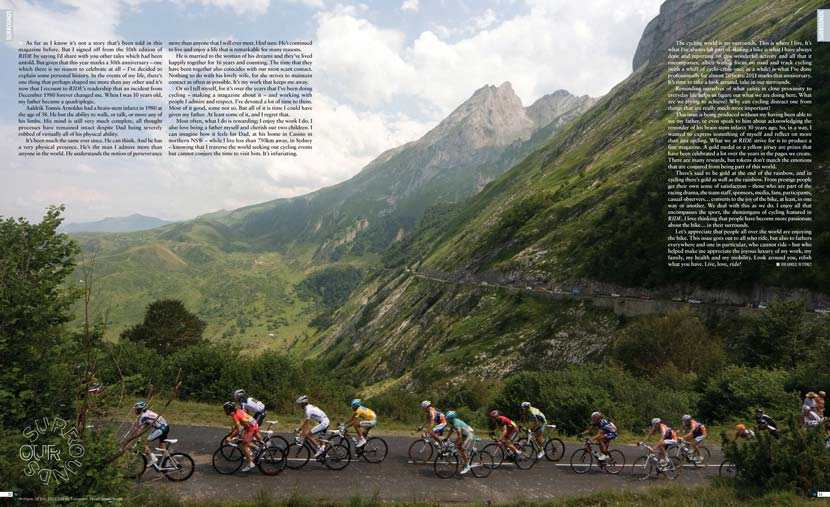 As far as I know it’s not a story that’s been told in this magazine before. But I signed off from the 50th edition of RIDE by saying I’d share with you other tales which had been untold. But given that this year marks a 30th anniversary – one which there is no reason to celebrate at all – I’ve decided to explain some personal history. In the events of my life, there’s one thing that perhaps shaped me more than any other and it’s now that I recount to RIDE’s readership that an incident from December 1980 forever changed me. When I was 10 years old, my father became a quadriplegic.

Aaldrik Tonnis Arnoldus had a brain-stem infarct in 1980 at the age of 38. He lost the ability to walk, or talk, or move any of his limbs. His mind is still very much complete, all thought processes have remained intact despite Dad being severely robbed of virtually all of his physical ability.

It’s been much the same ever since. He can think. And he has a very physical presence. He’s the man I admire more than anyone in the world. He understands the notion of perseverance more than anyone that I will ever meet. I feel sure. He’s continued to live and enjoy a life that is remarkable for many reasons.

He is married to the woman of his dreams and they’ve lived happily together for 16 years and counting (this year will mark their 20th anniversary). The time that they have been together also coincides with our most scant contact. Nothing to do with his lovely wife, for she strives to maintain contact as often as possible. It’s my work that keeps me away.

Or so I tell myself, for it’s over the years that I’ve been doing cycling – making a magazine about it – and working with people I admire and respect. I’ve devoted a lot of time to them. Most of it good, some not so. But all of it is time I could have given my father. At least some of it, and I regret that.

Most often, what I do is rewarding; I enjoy the work I do. I also love being a father myself and cherish our two children. I can imagine how it feels for Dad, at his home in Casino in northern NSW – while I live less than 750km away, in Sydney – knowing that I traverse the world seeking out cycling events but cannot conjure the time to visit him. It’s infuriating.

The cycling world is my surrounds. This is where I live. It’s what I’ve always felt part of. Riding a bike is what I have always done and reporting on this wonderful activity and all that it encompasses, albeit with a focus on road and track cycling (with a whiff of cyclo-cross once in a while) is what I’ve done professionally for almost 20 years: 2011 marks that anniversary. It’s time to take a look around, take in our surrounds.

Reminding ourselves of what exists in close proximity to everyday life helps us figure out what we are doing here. What are we trying to achieve? Why can cycling distract one from things that are really much more important?

This issue is being produced without my having been able to see my father, or even speak to him about acknowledging the reminder of his brain-stem infarct 30 years ago. So, in a way, I wanted to express something of myself and reflect on more than just cycling. What we at RIDE strive for is to produce a fine magazine. A gold medal or a yellow jersey are prizes that have been celebrated a lot over the years in the pages we create. There are many rewards, but tokens don’t match the emotions that are conjured from being part of this world.

There’s said to be gold at the end of the rainbow, and in cycling there’s gold as well as the rainbow. From prestige people get their own sense of satisfaction – those who are part of the racing drama, the team staff, sponsors, media, fans, participants, casual observers… converts to the joy of the bike, at least, in one way or another. We deal with this as we do. I enjoy all that encompasses the sport, the shenanigans of cycling featured in RIDE. I love thinking that people have become more passionate about the bike… in their surrounds.

Let’s appreciate that people all over the world are enjoying the bike. This issue goes out to all who ride, but also to fathers everywhere and one in particular, who cannot ride – but who helped make me appreciate the joyous luxury of my work, my family, my health and my mobility. Look around you, relish what you have. Live, love, ride!

– By Rob Arnold (in Sydney)