Shane Perkins: Recollections of a keirin…

On the day Shane Perkins returned from Apeldoorn, Holland, after winning the keirin world championships in March this year, RIDE spoke with him about the experience. Alas, the interview never made it to print. With 110 days to go before the 2012 championships commence, we’ve decided to delve into the archives and get some insight from this charismatic rider who will be a favourite for the rainbow jersey in the sprint events in Melbourne… 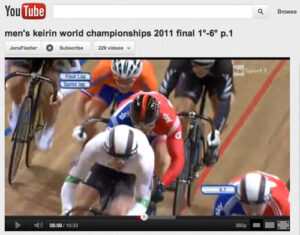 Highlights of the victory...

RIDE: The keirin final at the 2011 world championships was a great race. We haven’t seen one so close for quite some time…

Shane Perkins: “I had a few people tell me how they thought it was a great race just from the fact that it was tight at the finish between first through to third place. It was pretty bunched up and you don’t generally see too many keirins like that these days. That’s unfortunate but luckily ours was, I guess, exciting for a lot of people.”

You took it to them… Chris Hoy seems to like to drop behind before opening up his sprint. He did it again in Holland in March this year. When the derny peeled off, you were looking behind and watching out for him. But you did lead for a long time, didn’t you?

“Yeah, I was at the front for quite a while and obviously you don’t want to lead for too long because it’s a long two-and-a-half laps on that track. But luckily Matt Crampton came past and Chris tried to come around with him and I thought, ‘Oh jeez, I don’t want to box myself in here.’ The speed was quite high early on and that left me with a bit of a gap and when it opened up between Matt and Chris, I popped my wheel in there and pushed Chris out into the wind a bit. He slotted back a bit which opened up the door for me so that I could sit there and chase Matt.

“I gave him a bit of distance and then, coming into the bell lap, I knew the guys were coming so I gave it everything I had. And ended up getting to the line first so that is great.”

When you talk about it, do you relive it in your mind or remember it from how you’ve since seen it in replays?

“When I think about it, I can see it in my head. The race went very quickly. The bits that really stick in my mind are, obviously, crossing the finish line and the emotion of actually winning. But watching it on YouTube or the television it brings back a few memories and snippets from the race. It went by so fast, but that feeling of knowing that you’ve won is great. It had me thinking there, for a little bit, ‘Is this happening?’ Yep. It is.

“On the back straight after the race you can see that all my emotion comes out. It was awesome to finally get the world title.”

You had quite a crew there. I see that Big Man (Sean Eadie) was the first to congratulate you…

“Yeah that was pretty fitting. He’s put a lot of work into me in the last three-and-a-half or four years. Our relationship as coach and athlete goes a bit further than him just being a coach. He’s a true mentor and he supports me all the time. I’m on the phone to him every day so it’s great to spot him out.

“After the win in the keirin, we both got quite emotional and he gave me a big hug when I got off the bike. We finally did it and hopefully we can look forward to many more wins together.” 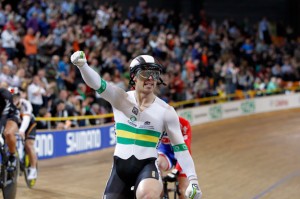 “It has been a while since he has been beaten. When I went into the race, I didn’t think of it like that. I couldn’t afford to go in thinking, ‘Jeez, I just want to beat Chris.’ I knew he was in good form and I knew I had to go out there and do what I could.

“We considered our tactics going into the final and it played out really well, the way that I wanted it to and I put myself in a position for it to be that way. It was great to win. It was definitely a class field and now we know Sir Chris is beatable. I’ve just got to say though, he is all class – he’s a fast man and he’s great to race against and off the bike he’s such a nice guy who is so humble. For a man who has done so much, it’s great to see someone behave the way he does.”

He’s got the personality that makes it seem as though he’s going to be able to cope with the enormous amount of attention that’s going to come his way. Next year is going to be phenomenal for him… and many others in British cycling.

“He handles it all very well. And doing what he’s done – I don’t know how many titles he’s won – but he manages all that comes with it very well. The fame hasn’t hindered him; he’s kept his form and his condition is up there especially given the restraints on his time that he’s got now with sponsors and other commitments. It’s a huge credit to him and I think we can all learn a lot from him.”

As well as how to handle oneself, we’re also learning things like how to position yourself on a bike. Shane, I’m intrigued by these handlebars that you guys are riding. It’s gone from narrow, to narrower… it looks, on television, like they’re only 36cm – how far are your hands apart?

“Most of the guys now have theirs around 36cm. Ours are around that measurement as well.

“In Japan, when I went there the first year to ride the keirins, I started off with 40cm. Then I got the idea to ride with 36cm. A couple of guys who I was over there with saw that and followed my example. I’m not saying that I initiated it, but it got everyone thinking more about their handlebars. Then the Australian team started experimenting with bar widths. Great Britain had smaller bars at the Olympics – I think they had 38cm in Beijing.

“After my initial move in Japan, I changed to the Eastons – which are 36cm. It’s getting quite small which is quite different. It looks a bit funny as I think you’ve noticed…” 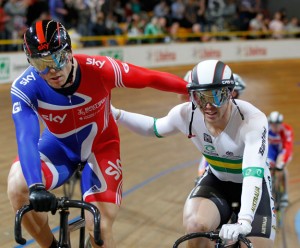 When you compare it with the French – who are still winning sprint world titles and obviously doing very well – but they look so broad against you and Sir Chris.

“It comes back to the development of equipment and stuff like that. Everyone is always finding new things or trying new things. Like, aerodynamically, you can see things are changing on the road racing scene with the time trial stuff. The bars aren’t that wide, they’re pretty streamlined and that’s the approach we’re taking on the track now.

“A lot of the sprint guys have pretty broad shoulders, they’re pretty chunky and there’s a fair bit of surface area hitting the wind. If you can try and bring that surface area in – which is what’s happening with the smaller handlebars – it’s closing the shoulders in a bit more, and essentially helping with the aerodynamics.”

I can imagine that the forces you generate on the bike all change now because you no longer have the leverage you once had.

“Definitely! When I first had the narrow bars on, I felt like the bike wasn’t even mine anymore. But I’ve been riding long enough and have tried enough variations that, within a couple of sessions, I’ve become adept with the different styles. I’m one of those guys who is willing to experiment with new equipment because you can only do so much physically – in terms of training and things like that, and we’re always working hard on that… that’s where we get the most of the percentage gains. But if we can do what I call “free speed” just from changing the riding position or tweaking some equipment, nothing physically, then why not? You’re going to get more of a gain than having to always rely on improving the body alone.

“We can push the limits even further now which is great.”

You told me a few years ago that you did drop your saddle. Is it getting lower?

“Yeah… it’s funny you raise that. Just because I hurt my back, I’ve brought my front end up a little bit and put my seat a little bit lower. Because of the gears we’re sprinting with getting bigger, you’d think that the saddle might be better going up but it seems to me like a lot of the guys are dropping their saddle quite a lot.

“I think it’s because the RPM has dropped now that the gears have gotten a bit bigger. In a way it’s like you’re setting there “repping” it out like you do in an ergo session. Guys are riding very smoothly even though they’re hitting speeds over 70km/h in the sprints. The position on the bike is definitely changing and it’s very interesting to watch how it’s developing. For me it’s pretty exciting.

“I’m working with some biomechanical guys and we’ll see if we can refine a few things. I’m looking at changing pedals and thing like that too just to test if we can get more feedback from the bike with different shoe and cleat combinations – things like that.”

Can you offer some particular observation from the 2011 world championships that perhaps can’t be found on Google – something you witnessed that stood out as being interesting but that hasn’t yet been reported?

“The biggest thing that I noticed – and I don’t know if it’s just me – but I think that, over the last couple of years, there is something special happening in track cycling. The friendships that have been built up, certainly in the sprint crowd, are honest ones. People might think that when we go out on the track we want to kill each other but over the years we’ve built up these friendship that are going to be life-long ones. It’s great to go to the track, see these guys who are rivals but we have a chat, ask how they’re going, wish them all the best for the racing… and that feeling in the sport – from more than just riders, also mechanics and coaches of rival teams – is something that people may not share from just watching from the sidelines.

“It’s a great feeling to think that everyone is appreciative of one another.

“I’m not sure if I’m the only one who feels this way but it’s something that makes me enjoy being there. Even when I won, I had coaches from France and Germany coming up and hugging me. Mechanics from Great Britain were shaking my hand and telling me what a great ride it was. And it was really an eye-opener for me. That was awesome and I think it says a lot for Australians as competitors; we’re pretty highly respected in cycling around the world. That was something I noticed.”