With the world championships about to get underway, the Australian Cycling Team and its product partners have unveiled the bike to be used for the campaign in Berlin… and, hopefully, the Olympics in Tokyo. 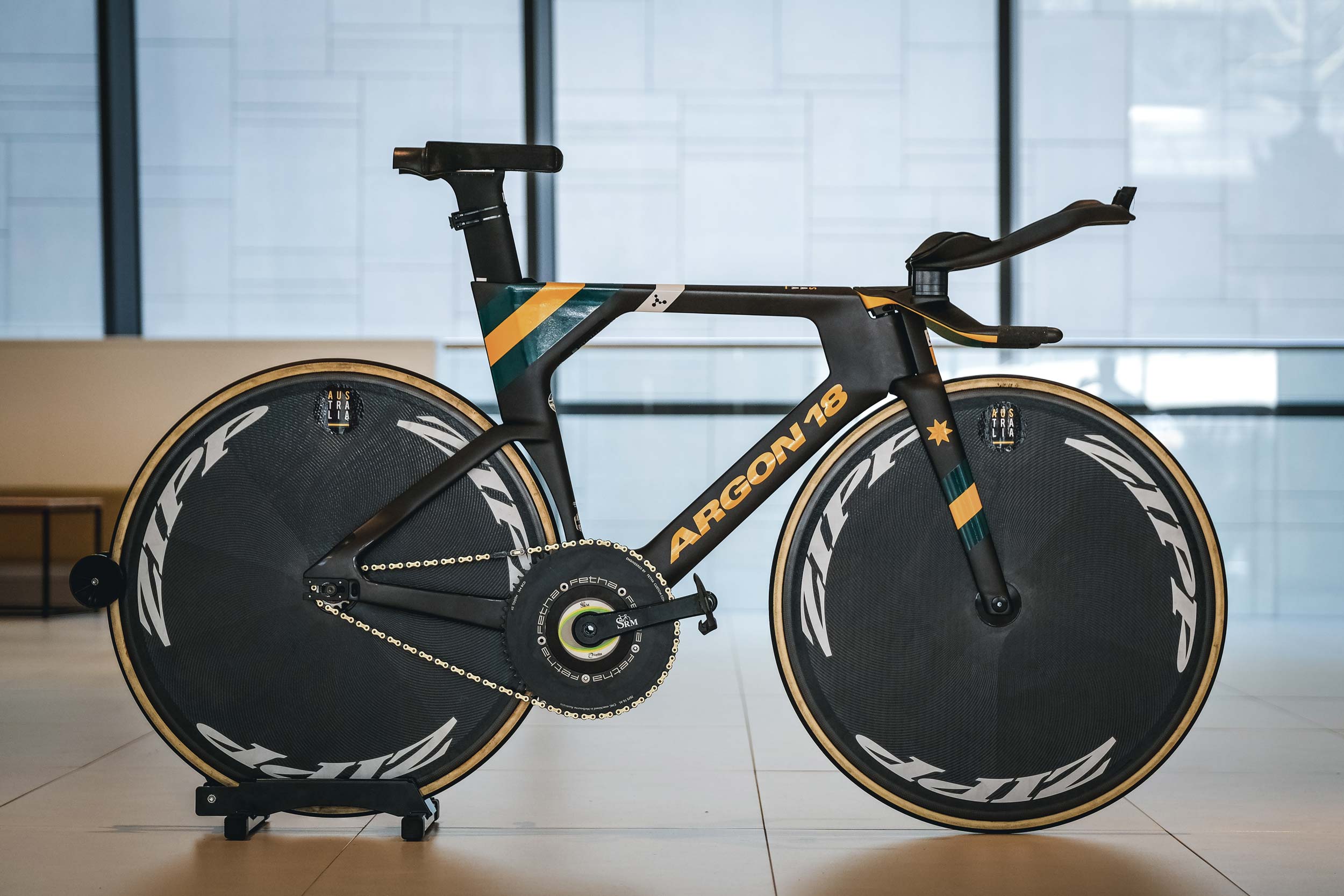 Lighter. Stiffer. More aerodynamic. The requisite elements of a new bike release have been coughed up to explain the benefits of the collaboration between the Australian Cycling Team, Argon18, Zipp, Monash University, and the University of Adelaide.

Ultimately, there will only be a few riders who will truly understand the benefits of this exciting new bike, but the hope is that it will inspire many others to consider cycling as part of their sporting diet. 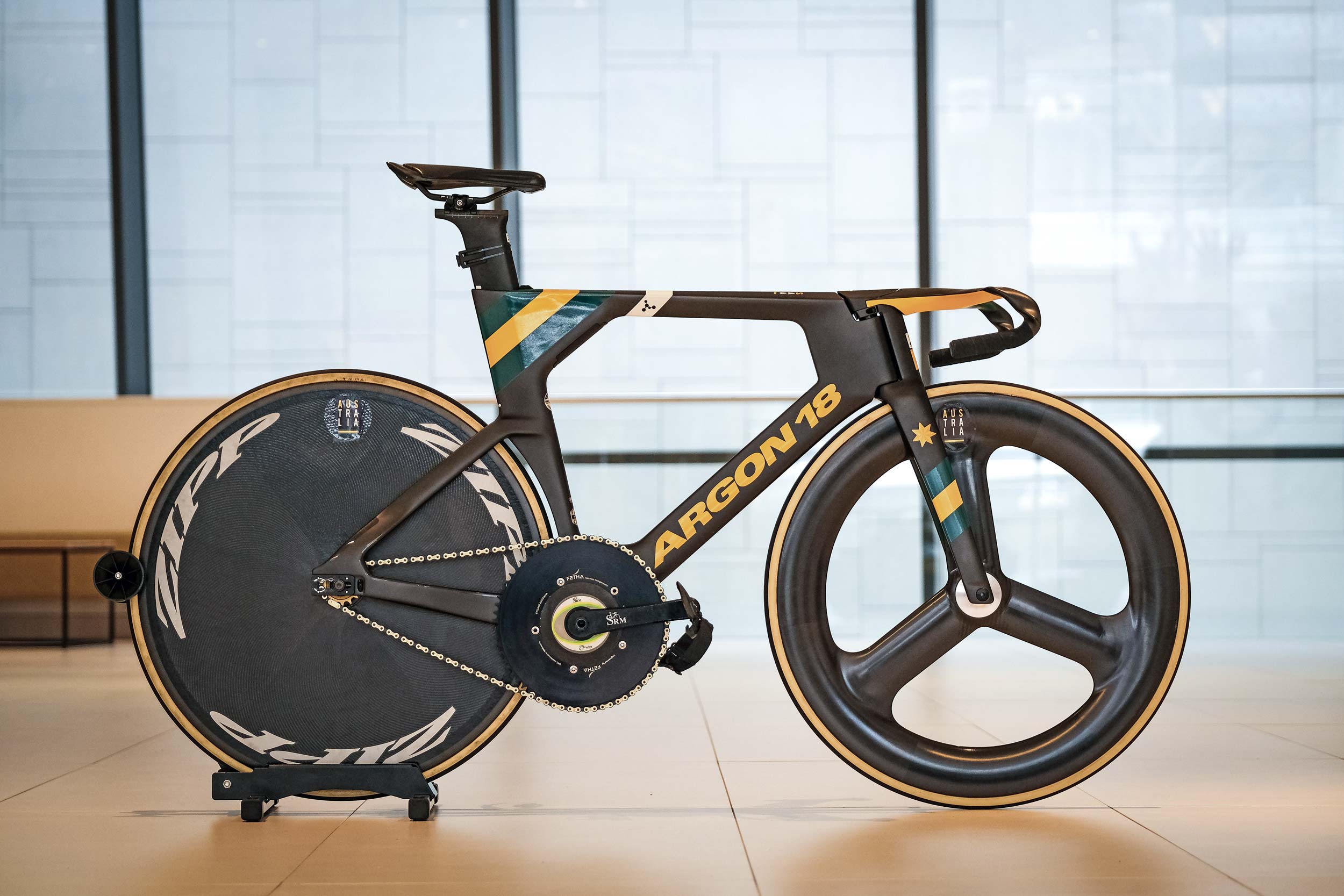 The Electron Pro is a rethink of the track bike. It incorporates more than just the regular phrases rolled out to talk about improved tech. Light, stiff, aero… they are expected. It’s a ubiquitous explanation in 2020. (Who makes a bike heavier, more flexible and less aero?)

The trick for the marketing departments of all those associated with the bike that will be raced in Berlin in the coming days, when the track worlds are contested, is to find a way of explaining the changes, without revealing too much too soon… 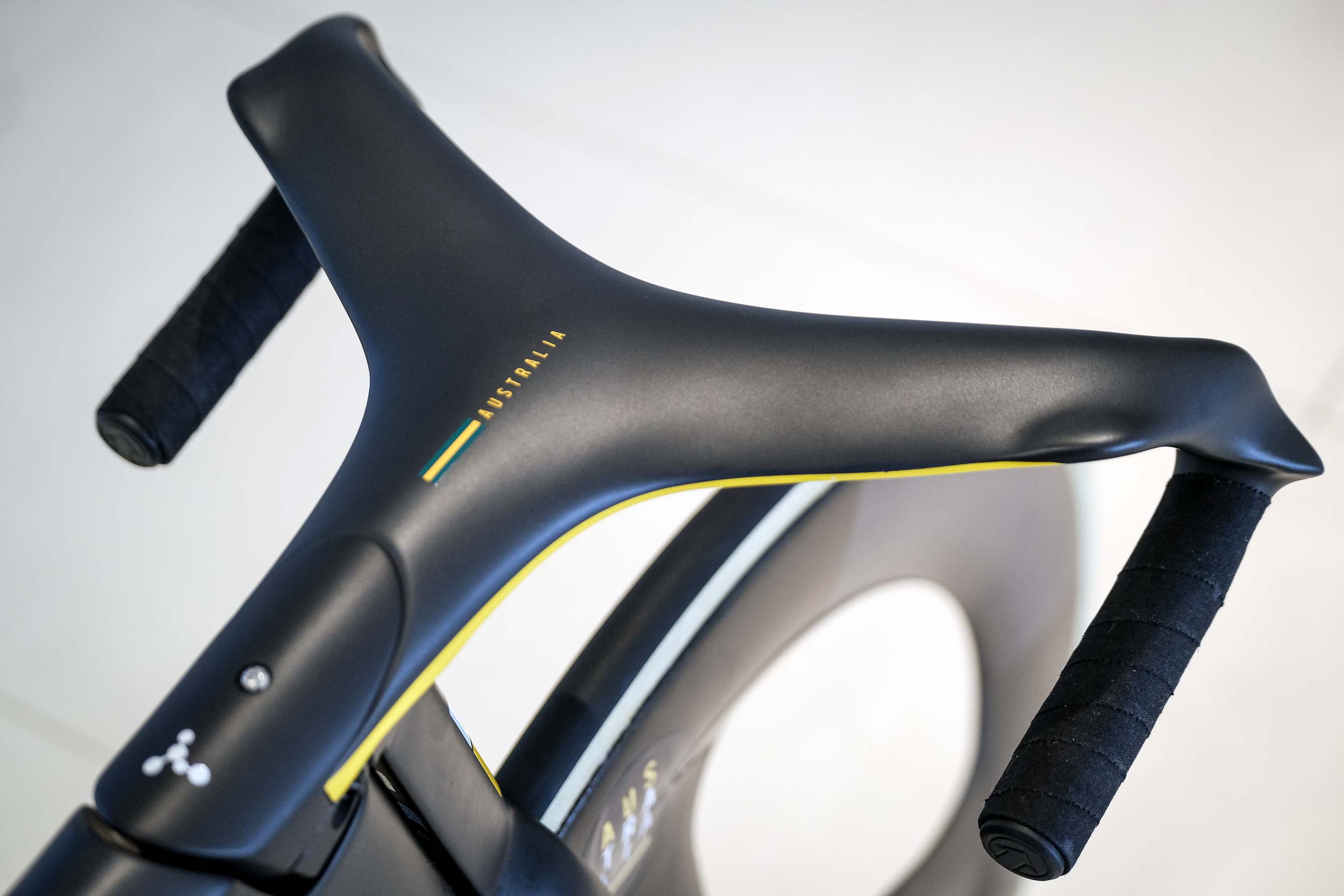 The supporting documentation that was issued with the release of the Electron Pro is still marked ‘DRAFT’, and there are XXs in place of where the time ought to be, but the PDF outlines the complexities of creating a bike that was faster than its predecessor – and, ideally, quicker than what rival nations are going to race at the worlds and, hopefully, the Olympics in Tokyo.

“With championships decided by fractions of a second, aerodynamic optimization can dictate victory on the track: no detail is too small to consider in maximizing results. Our team’s analysis focused largely on the front profile of the bike, resulting in the revolutionary new pursuit fork design. Extensive CdA and wind tunnel testing on various design iterations produced fundamental findings for the design.”

The opening paragraph explains the obvious: a need to minimise wind resistance in the hope that it provides Australian riders the best chance of victory in Berlin and Japan… and onwards to whatever becomes the future of cycling in the post-Tokyo era. 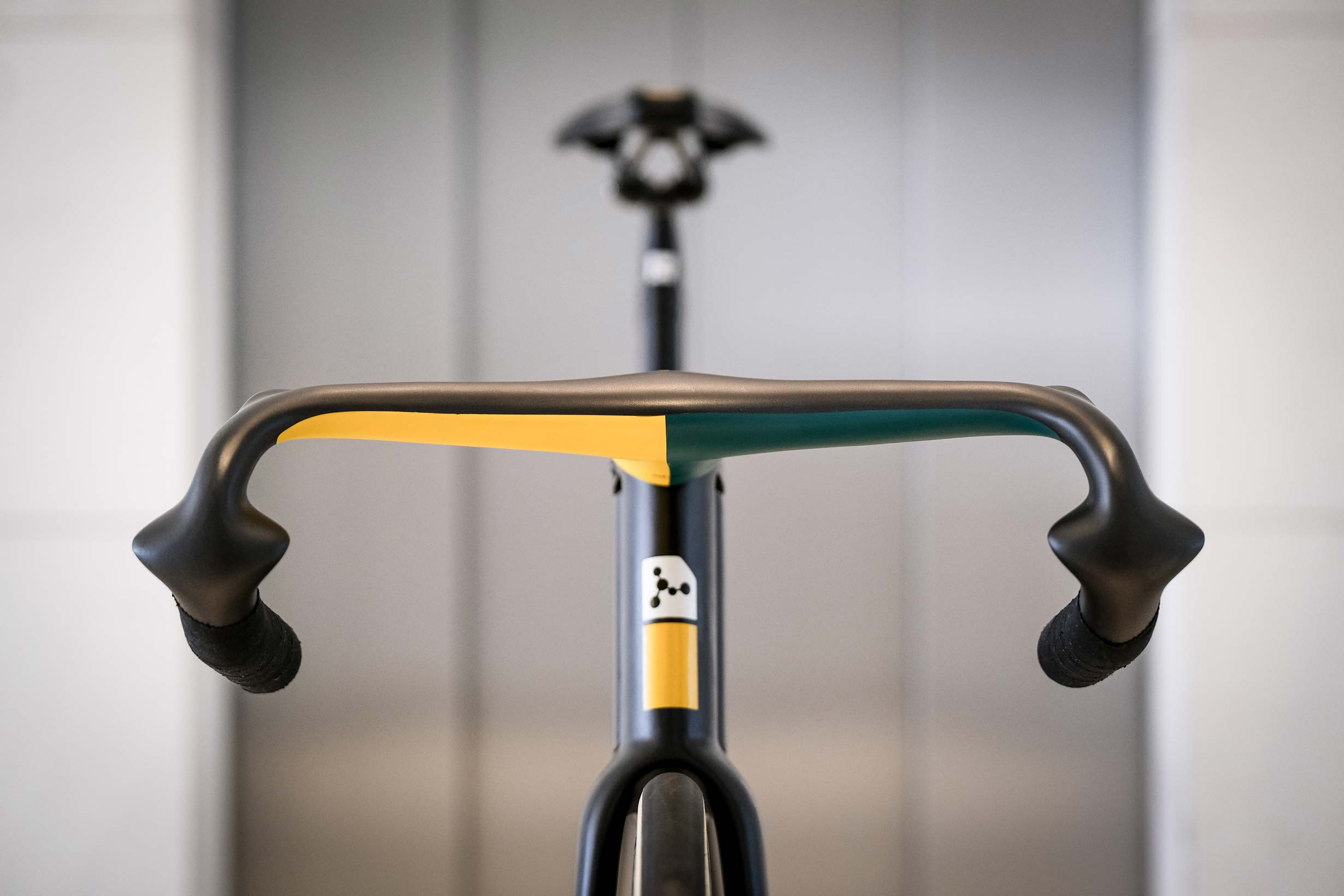 For the moment, the lion’s share of Australian cycling’s high-performance funding is allocated to track. What comes next, should AusCycling get up and – as the current state of play suggests – MTB and BMX get elevated status, remains to be seen.

Right now, however, there’s every reason for the Australian Cycling Team headed by Simon Jones to be proud of the latest product. 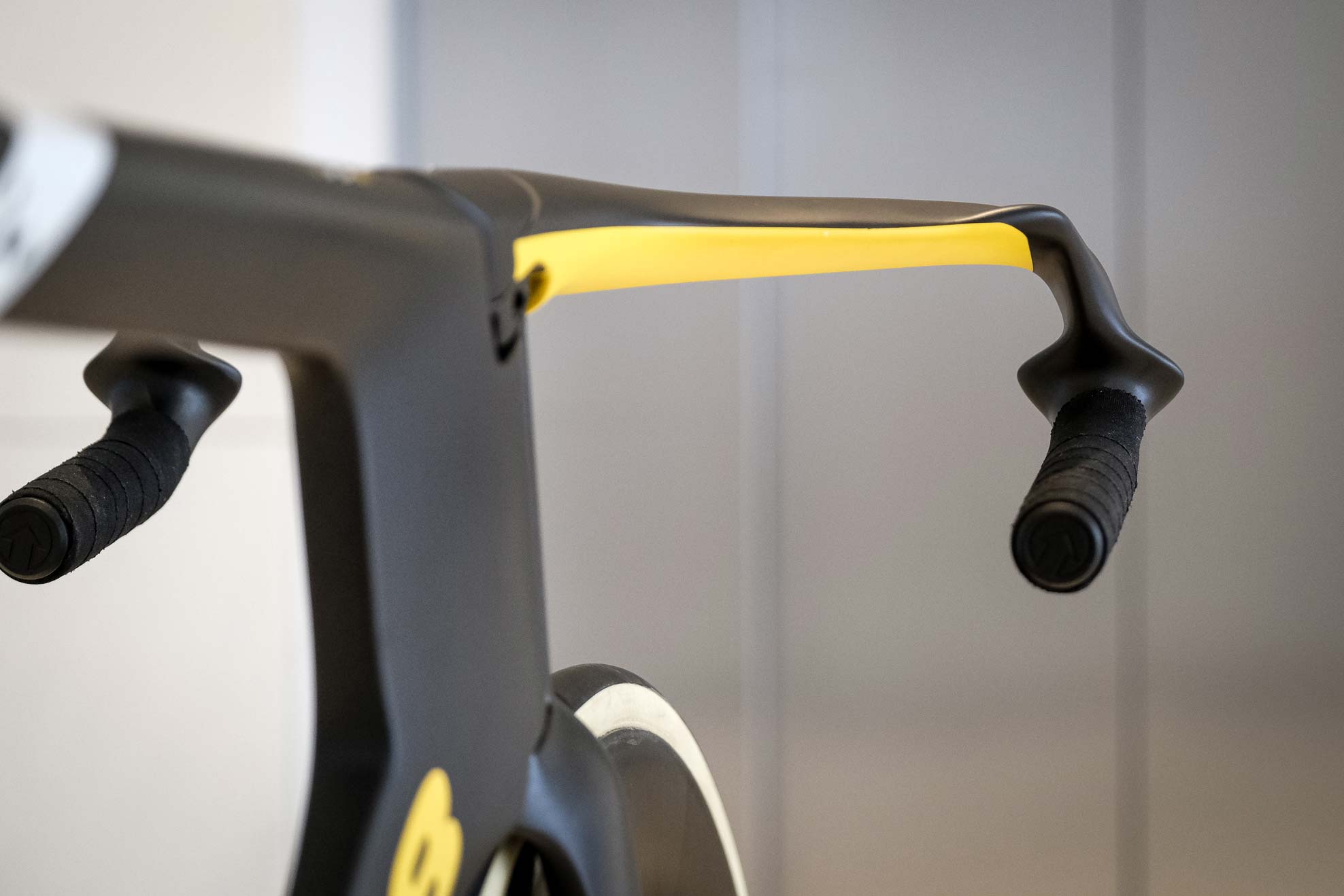 Below the photos, you can see the verbatim explanation presented in the official releases. In time, we’ll find out from the riders what effects they can feel and why the bikes are better than what they have ridden before. In the meantime, here is a gallery of images taken by Peter Svendsen Ebro, and supplied by Cycling Australia, to showcase the Electron Pro. 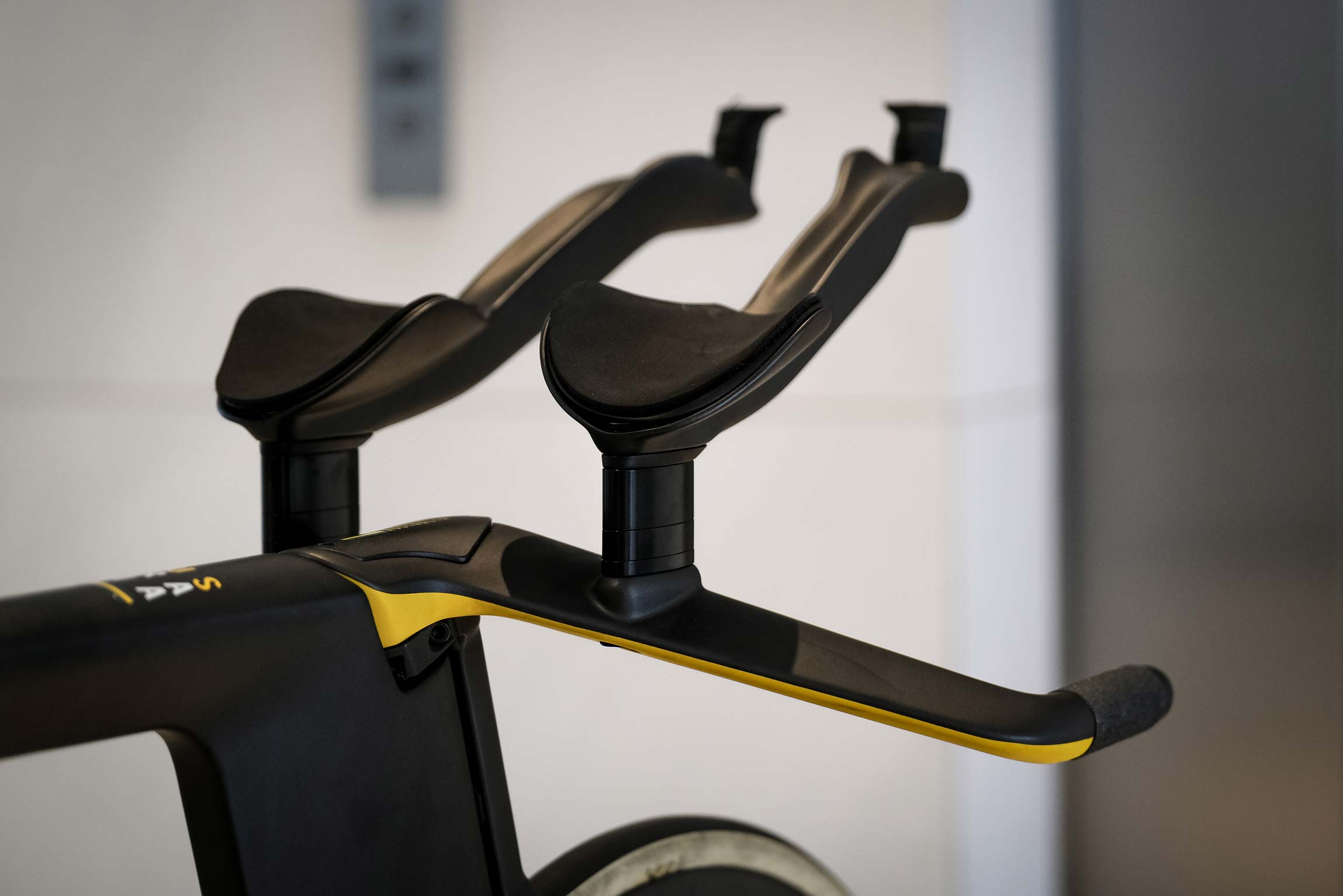 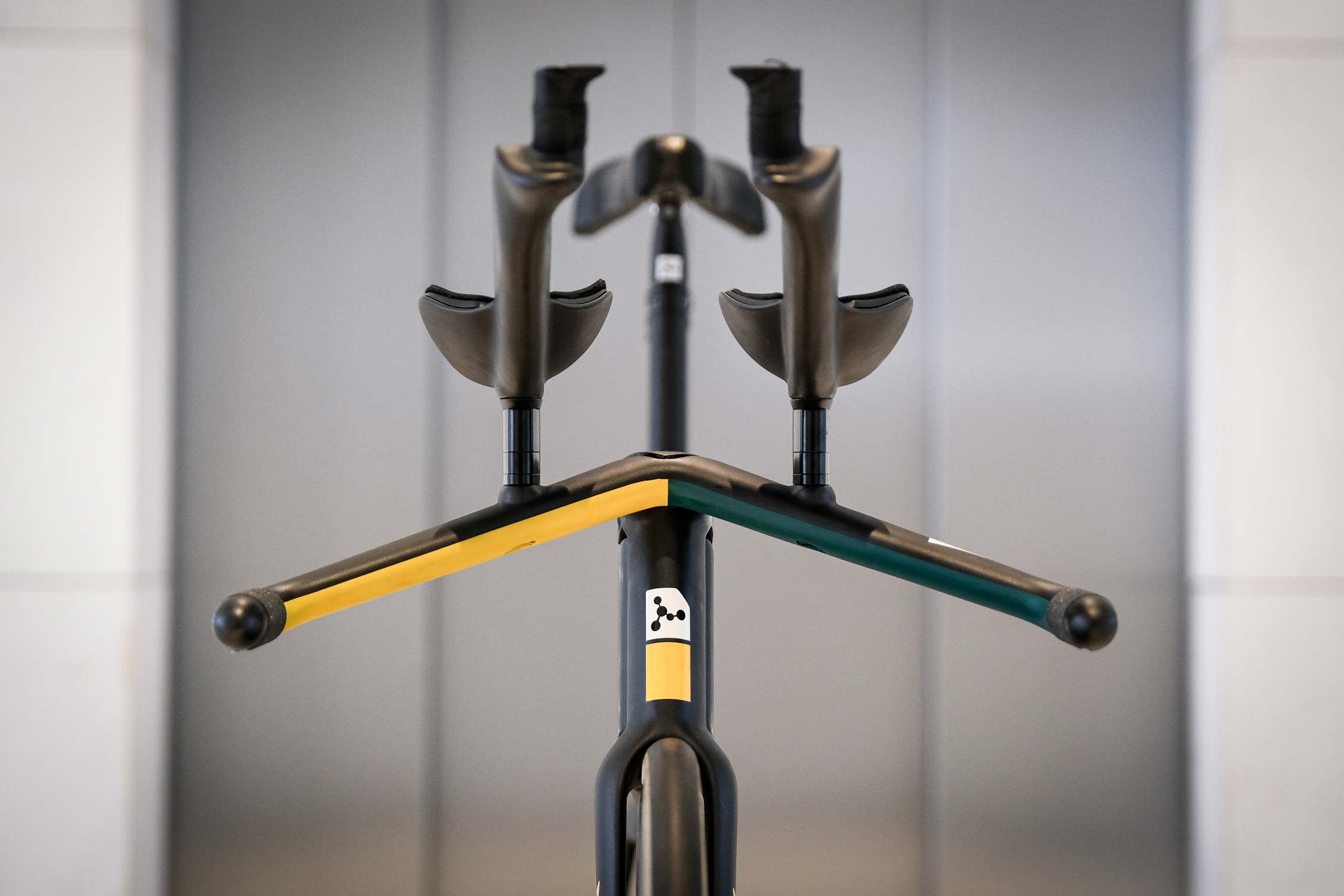 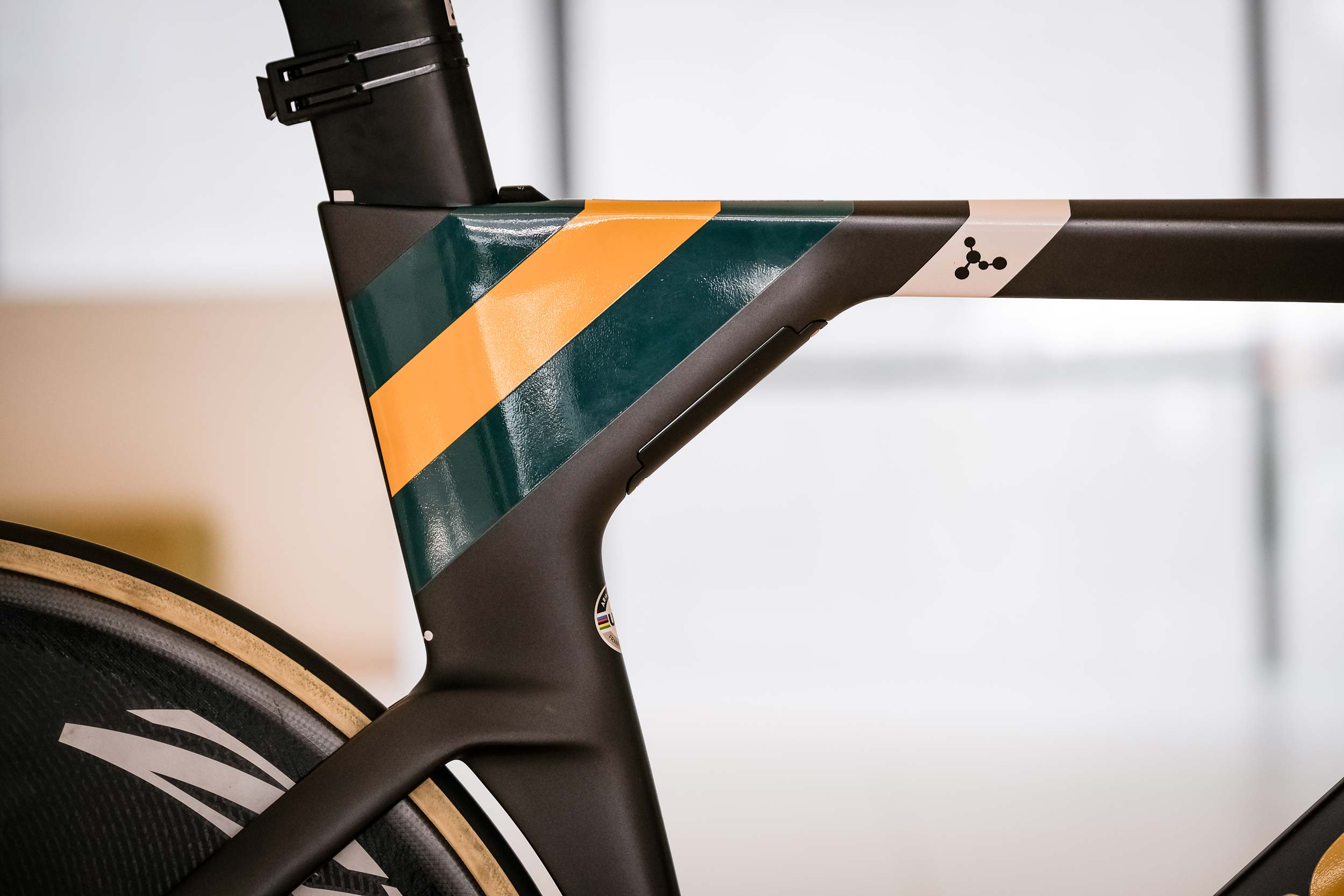 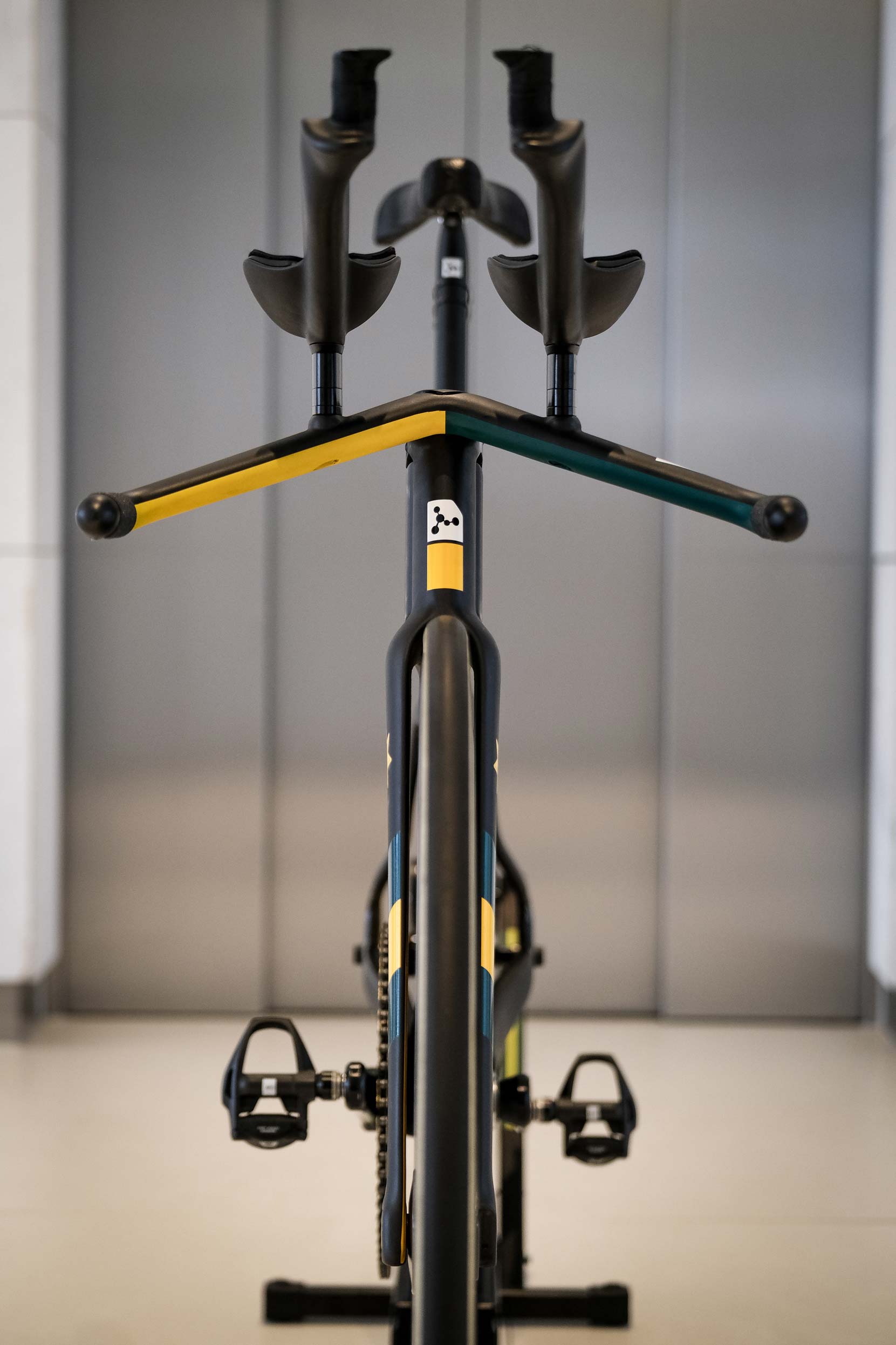 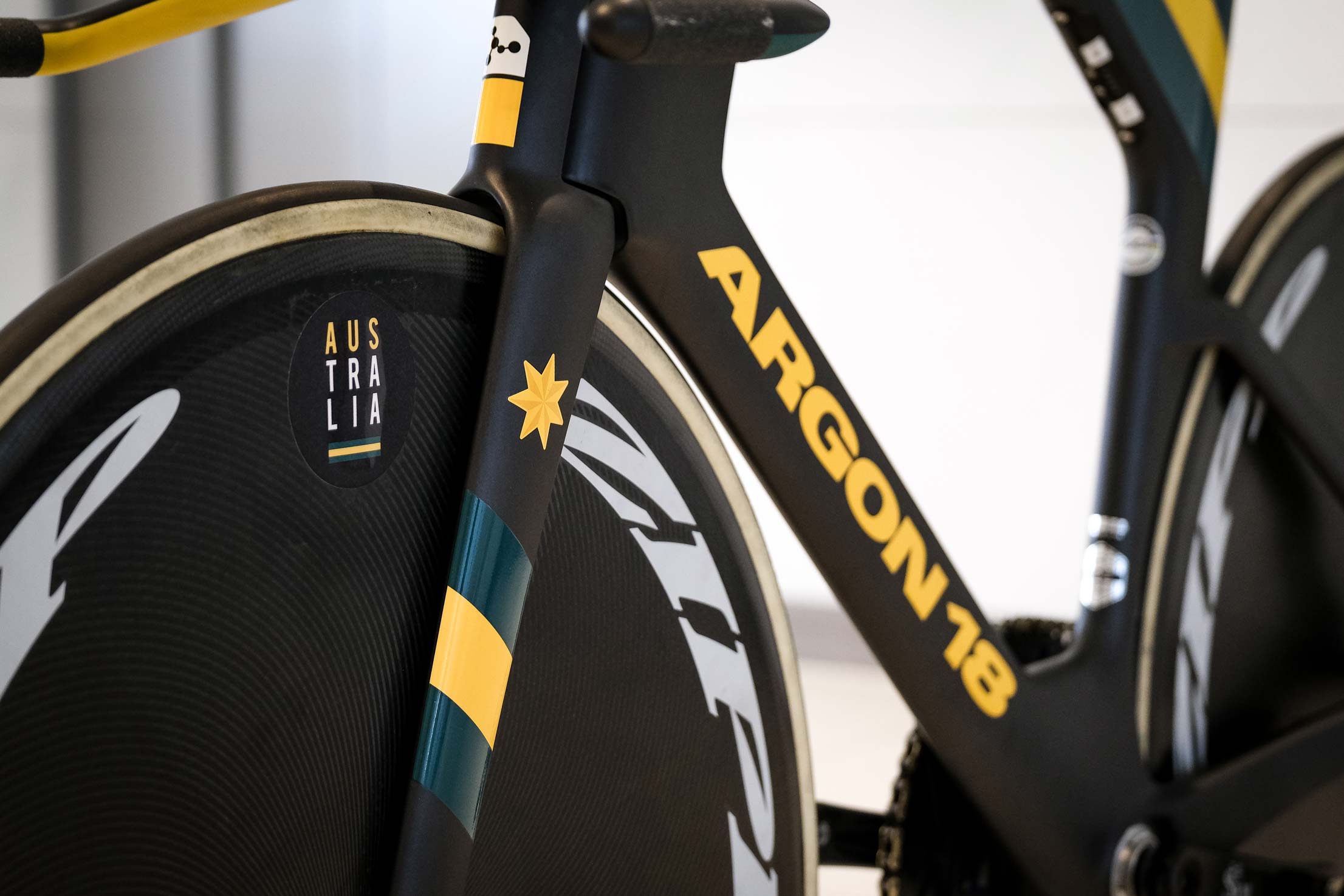 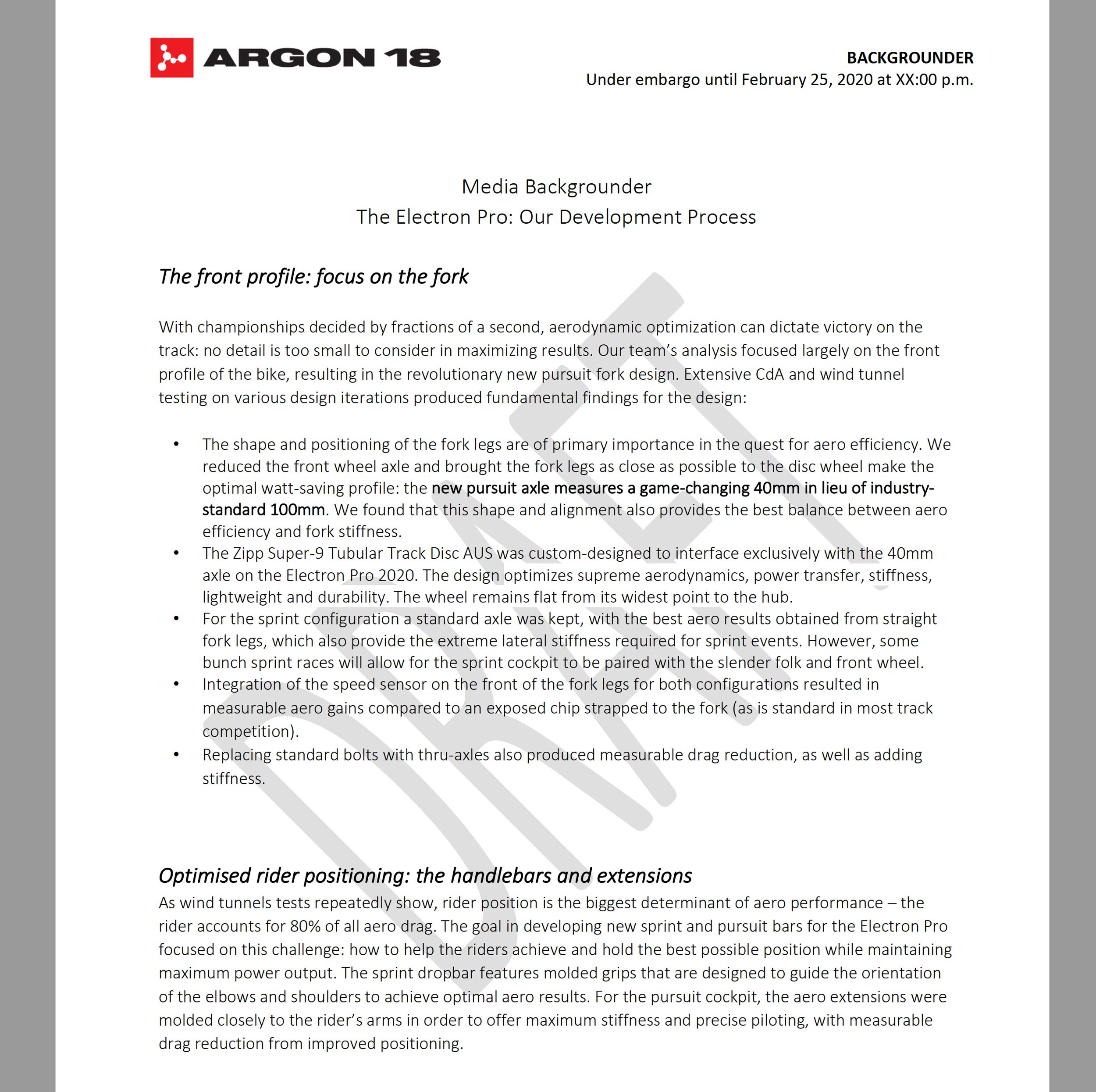 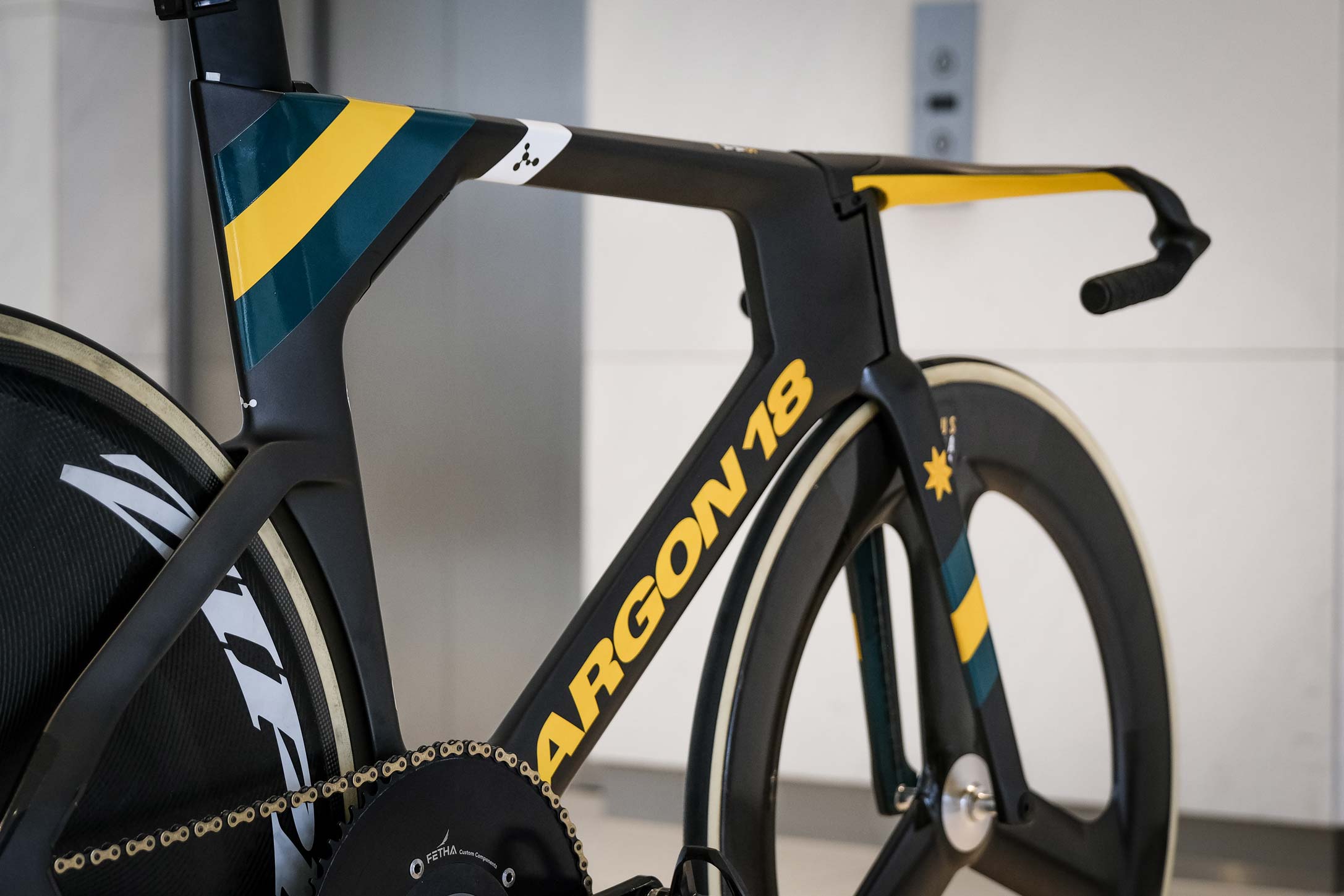 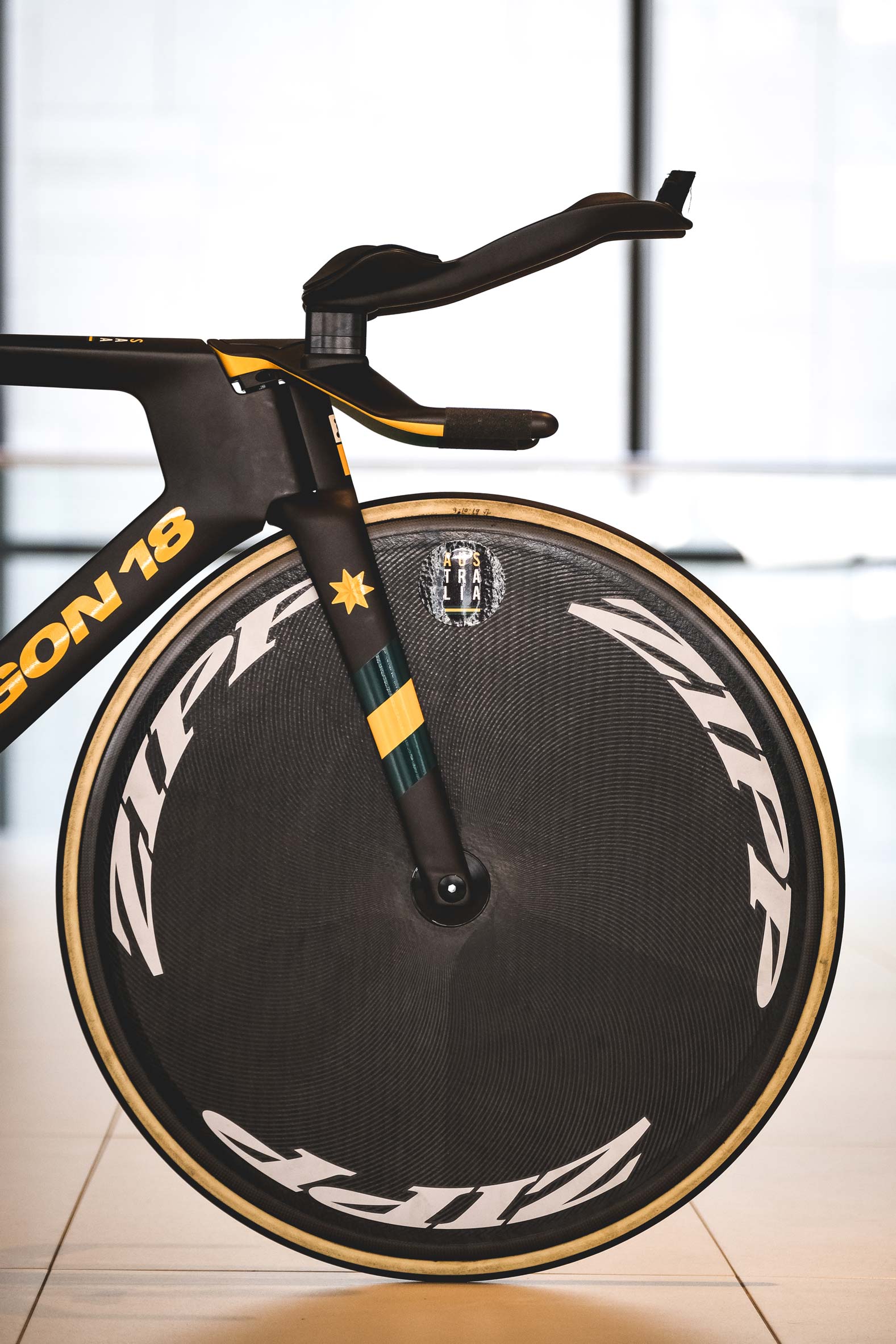 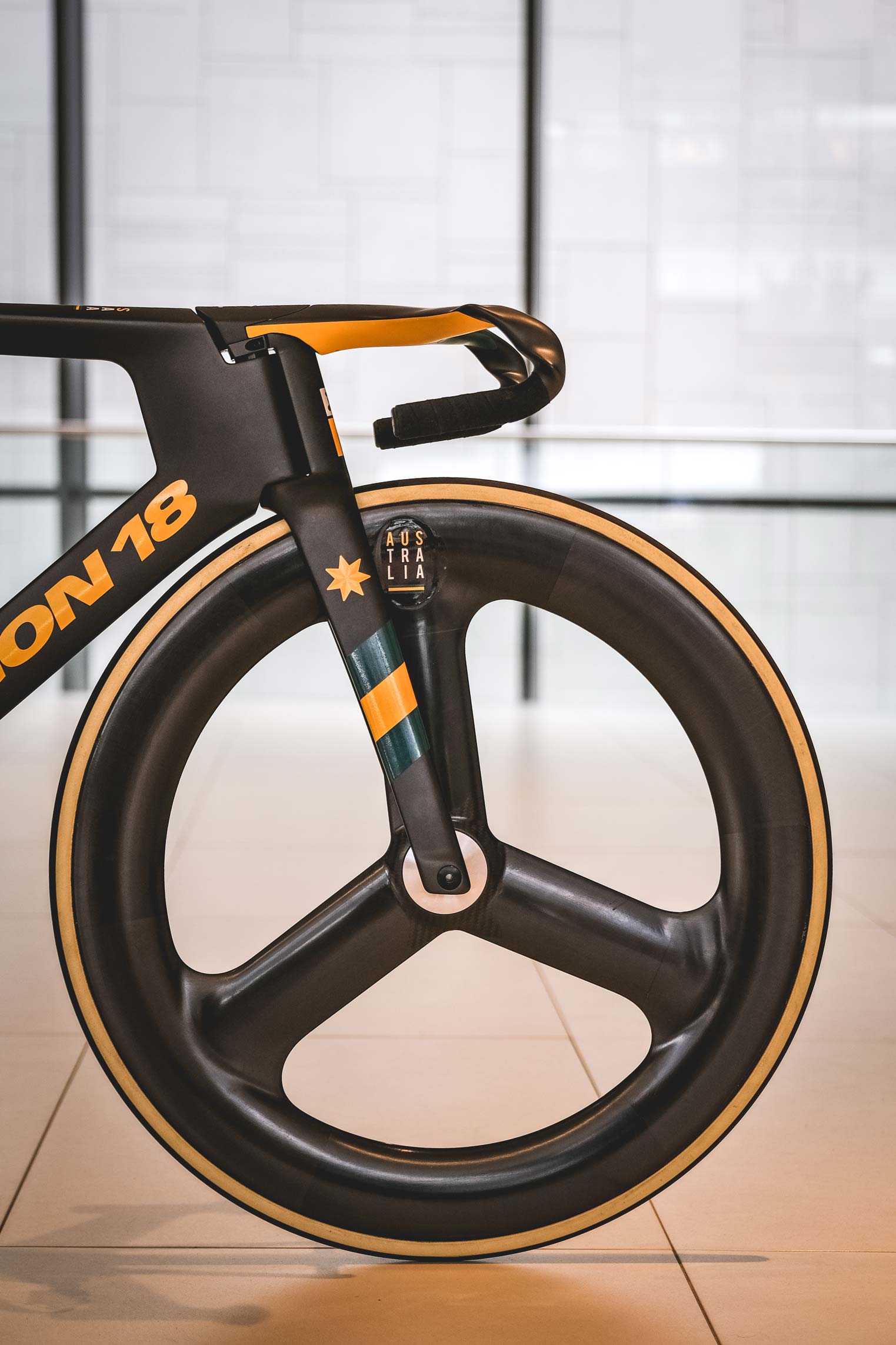 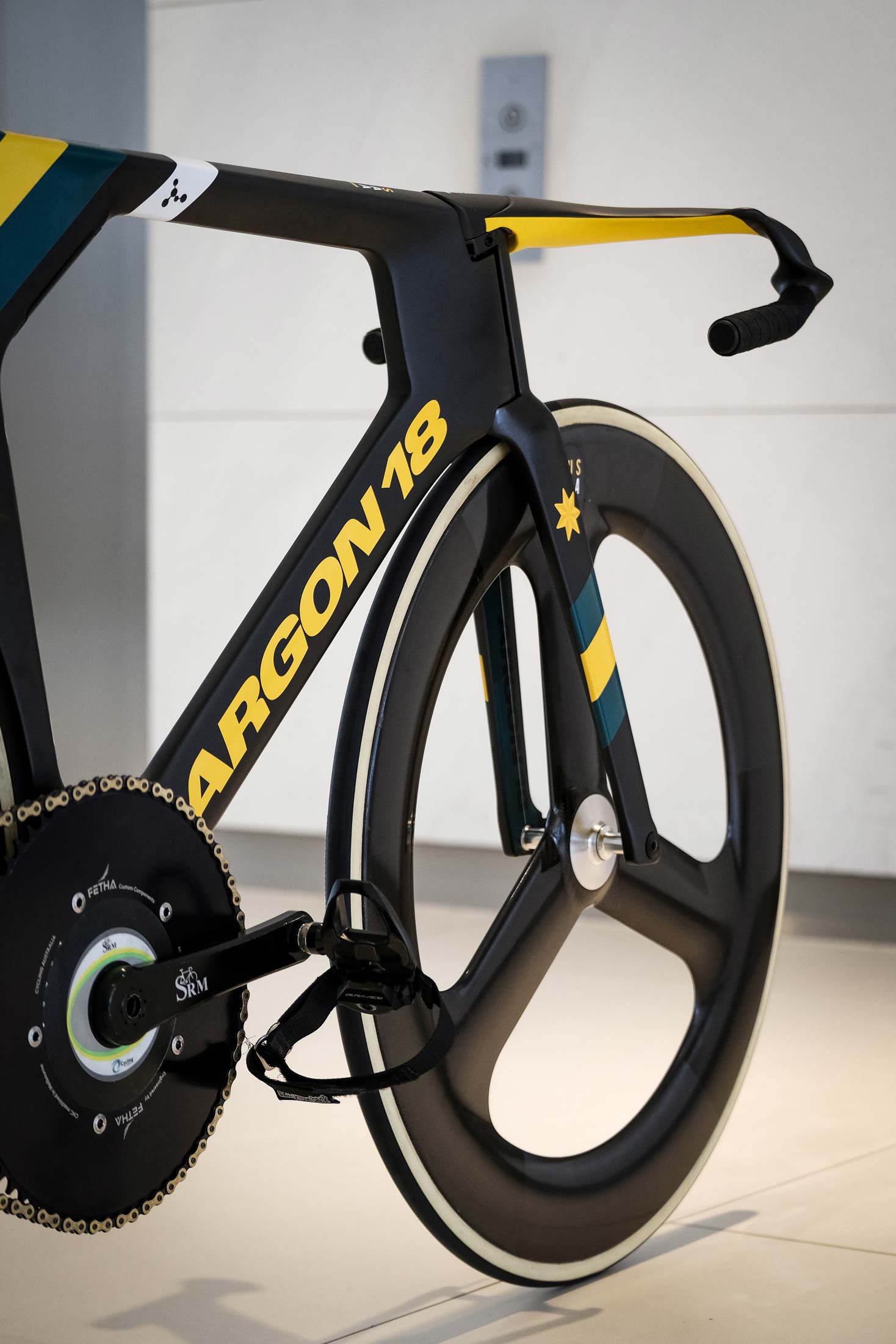 After nearly two years of collaborative research and development, Argon 18, in partnership with Cycling Australia, Zipp, Monash University and the University of Adelaide, is thrilled to unveil the result of the new 2020 Electron Pro.

With cutting-edge aero optimisation and stiffness to match the massive outputs of the world’s most powerful riders, the new Electron Pro is ready to make its mark on the world stage in 2020.

Top athletes know that it takes a team to reach the podium of the world’s most prestigious sporting events – and it took a team to create the machine to get them there.

“This project brought together a team committed to innovation, optimisation, and performance,” says Martin Faubert, VP Product, Argon 18. “By combining resources to develop the best possible equipment, we now have a bike that pushes the boundaries in every way, giving riders every possible advantage in the quest for gold.”

“We are really proud of this bike, and it’s through real teamwork and collaboration that Argon 18 and Zipp have developed this bike for us,” says Simon Jones, Performance Director at Cycling Australia. “To have the bike on time is excellent, as it gives all the riders time to get used to the feeling, which they all have done very quickly. I want to thank everyone at Argon 18, Zipp and CA who worked together – across many time zones – to deliver our new bike.”

The most immediately noticeable features on the new Electron Pro are the radically slender pursuit fork coupled with the custom-designed Zipp Super-9 Tubular Track Disc AUS wheelset, as well as the custom-moulded sprint handlebars and pursuit extensions. The bike also features an integrated timing chip, for a fully loaded velodrome winner.

The biggest aero gains were made by working closely with athletes, coaches and Cycling Australia’s aerodynamicist to achieve precise rider position, optimising both the lowest drag and highest power output. To achieve that we have developed an integrated drop bar for bunch races, and sprint and custom extension bars for the team pursuit.

The strongest athletes need the strongest equipment. We, therefore, raised the maximum resistance up to 350kgf – more than 3x the load recommended for the BB by ISO test standards. We did the same thing for the cockpit, where we doubled the load compared to ISO standards for fatigue and ultimate strength testing. 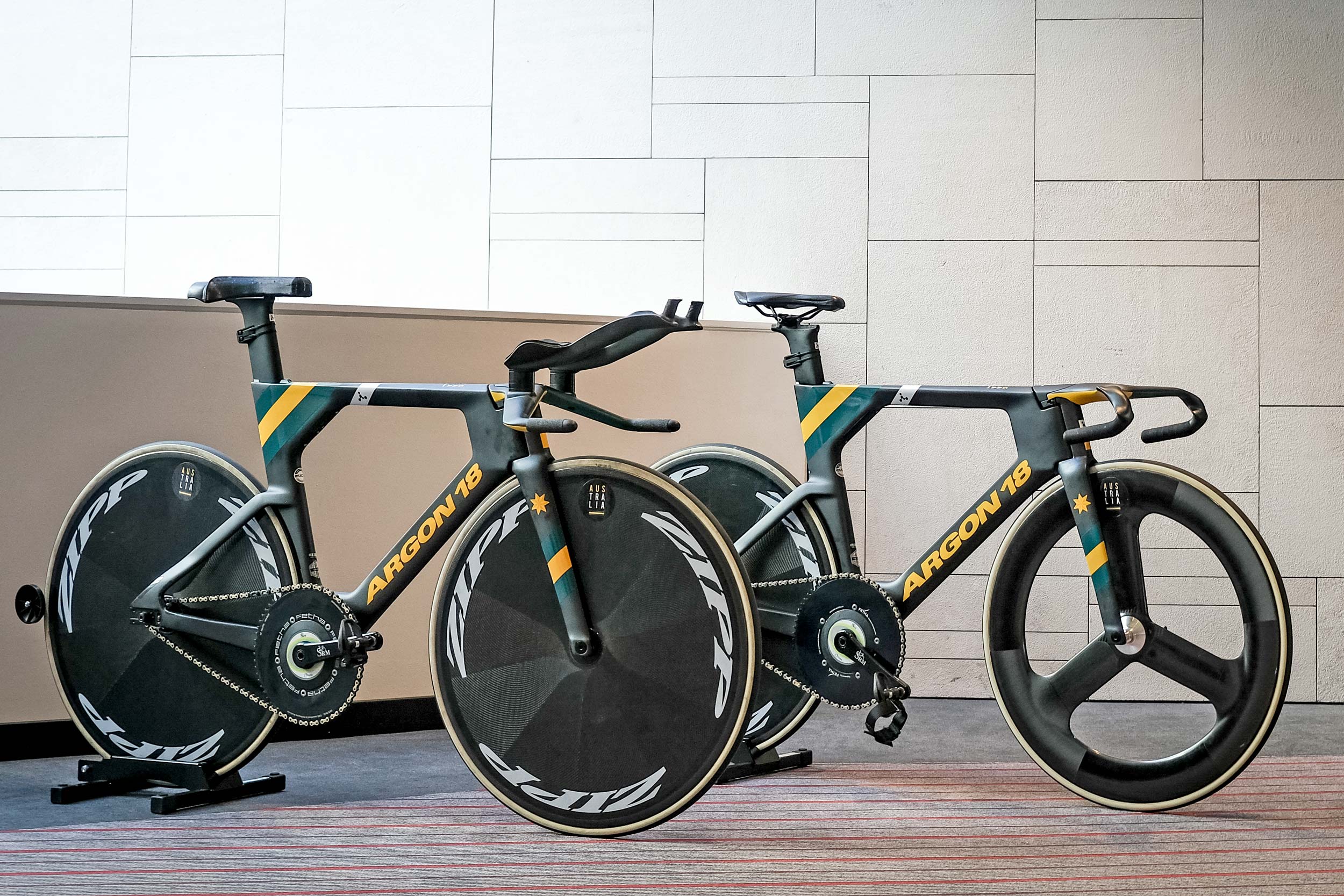