Adam Hansen’s experimentation with equipment has been the subject of many features in the past. He is quirky, pedantic, clever, and willing to think outside the box. He has raced on Ridley bikes for 10 years. 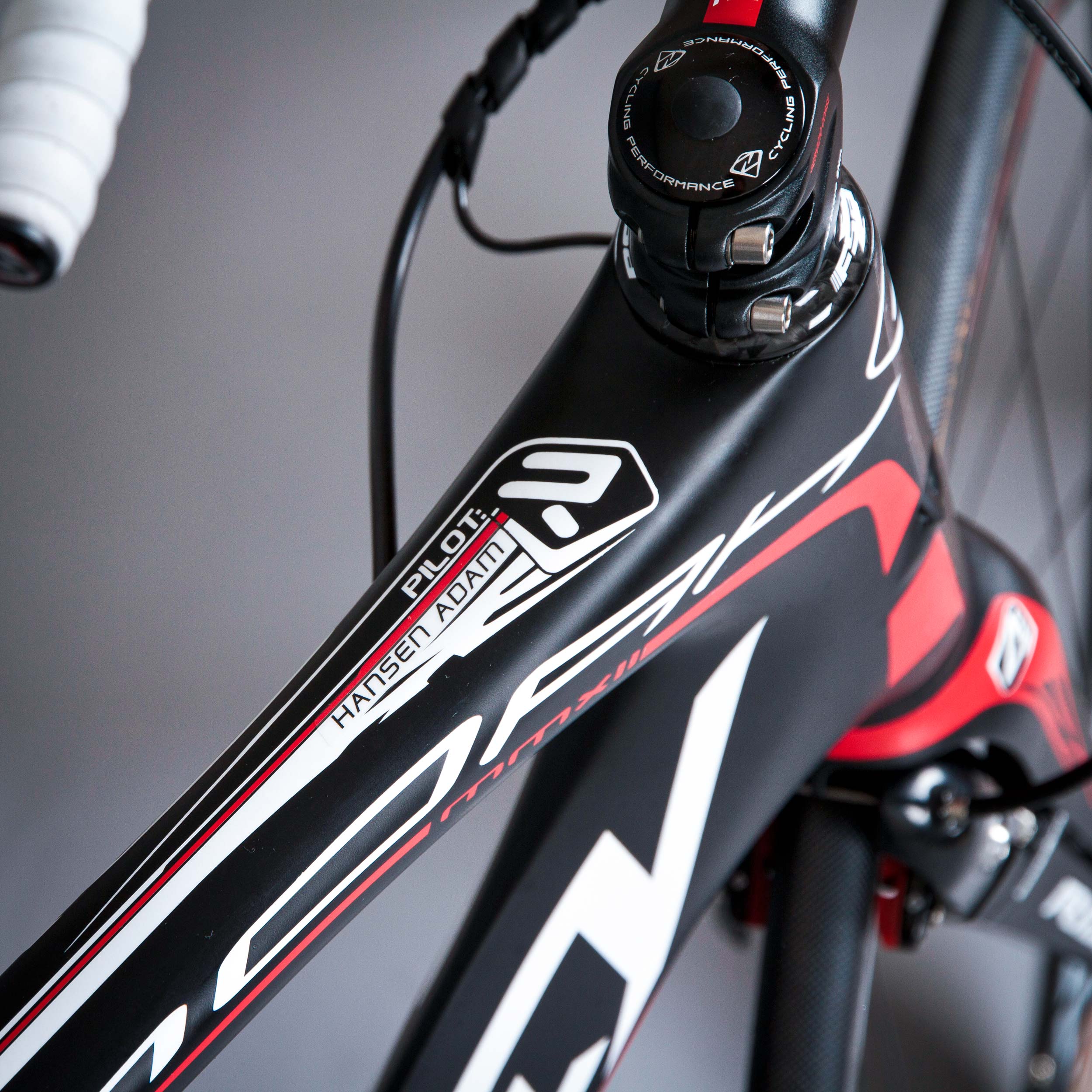 This is Adam Hansen’s Ridley Noah bike from 2012, his second season as part of his Belgian team (then known as Lotto-Belisol, now known as Lotto-Soudal). At 38 he remains keenly interested in product development.

RIDE Media has published numerous articles over the years in which Hansen explains his line of thinking about cycling equipment. He doesn’t mind breaking away from tradition and experimenting to ensure he gets the most out of his riding time.

From developing his own altitude tent in the early days of his pro career, to writing the code for a program to help teams manage logistics, he has been a pioneer in cycling. 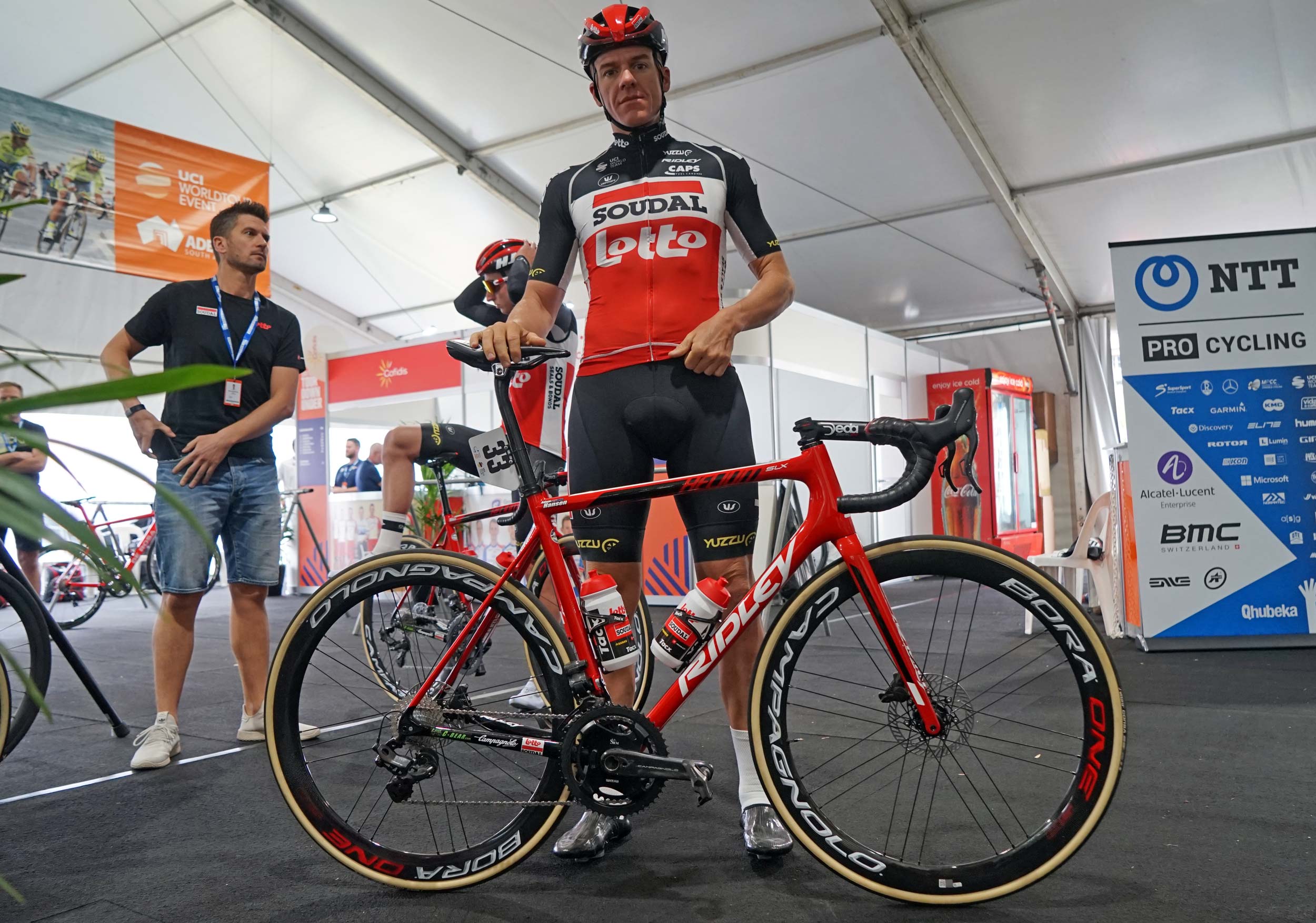 Adam Hansen and his Ridley Helium in January 2020. (Click here to read more about this bike and his planned equipment innovations after 10 years racing the same brand of bike.)

We began our most recent interview listing some of the innovations he has toyed with: “We know about your shoes and your quirky cleats and low stem and forward reaching seatpost and long cranks and narrow handlebars,” I said to him, while sitting on an Esky near the Lotto-Soudal team van at the 2020 Tour Down Under. “What am I missing?”

He went on to explain how he’s working on trying to create a lighter two-way radio for use while racing.

Use the ‘search’ option on RIDE Media and you’ll discover a range of articles about Adam Hansen and cycling equipment innovation spanning over 10 years.

Hansen first joined his current Belgian-registered pro team in 2011. He’s been riding Ridley bikes ever since.

In 2020, he usually races a Ridley Helium but he also has access to the Noah Fast, as used by another Australian star on the roster, Caleb Ewan. 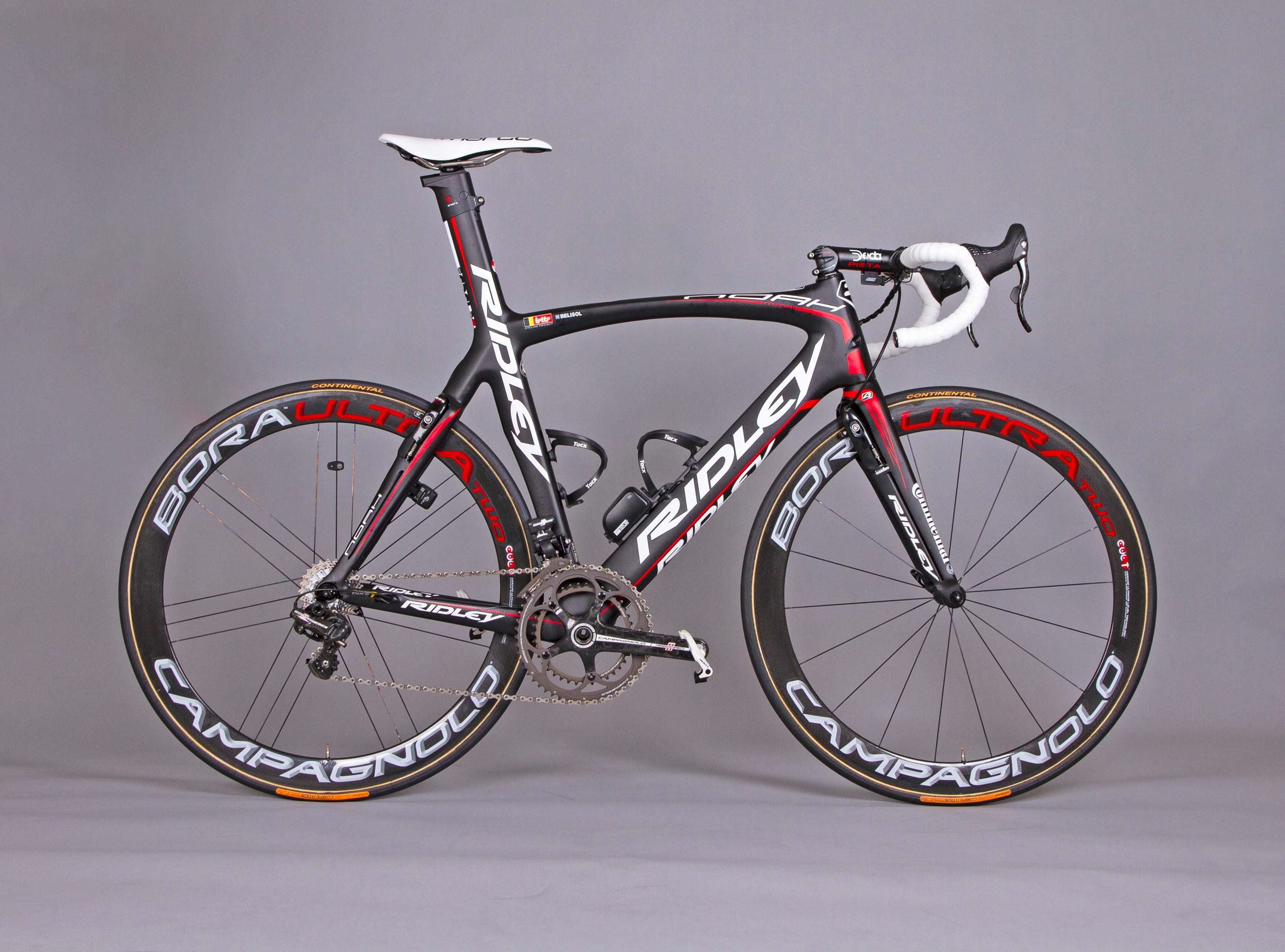 Hansen’s Ridley Noah from 2012: featuring integrated seatpost, integrated brakes, a slammed stem, and oversized, aero frame. (Scroll down the page to see more of this bike from Hansen’s second season with the Belgian team.)

Early in 2020, RIDE Media began publishing regular #RandomBikeGallery posts on our Instagram account. Over 60 bikes have been featured so far, and it was labelled ‘random’ because we jumped around through the years, displaying a range of brands, from a variety of settings: at races, in a studio… even from rider’s homes.

If riders and/or mechanics who have experience with the bikes featured will add some feedback about their experience, please don’t hesitate to share a comment via RIDE Media’s various social media channels. Or, of course, anyone who may want to know more can ask a question and get an answer from a broader community.

Don’t be shy, let us know what you’re thinking, or what you’d like to know about the bikes (or riders) and we’ll get some conversations going. 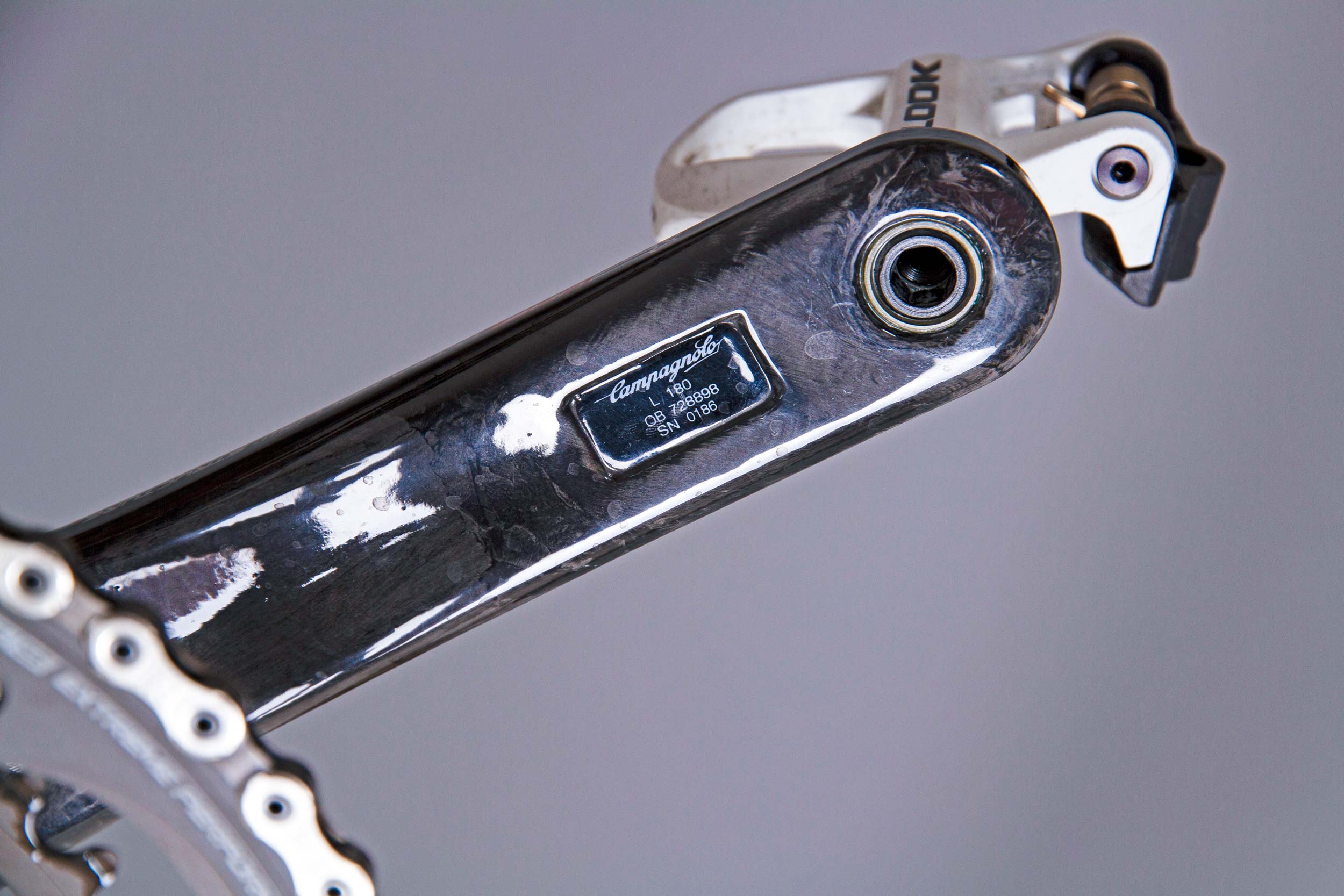 “I use 180mm cranks which is the biggest you can readily buy; there are some companies that make longer ones but with Shimano, Campagnolo, Rotor and all these brands, the limit is 180mm.

“What I’ve never understood with crank length is: why should everyone use the same? It doesn’t make sense.

“If you take the nut off the wheel of a car, it can be hard work if you use a short spanner. When the leverage is longer, it’s easier. This is endurance sport so obviously you want to push with the lowest amount of effort and power is torque-by-RPM, right?

“There was a Czech rider who had the hour record, Ondrej Sosenka. He used 220mm! They were custom-made. Okay, he was very tall (200cm) but he used long cranks very effectively.” 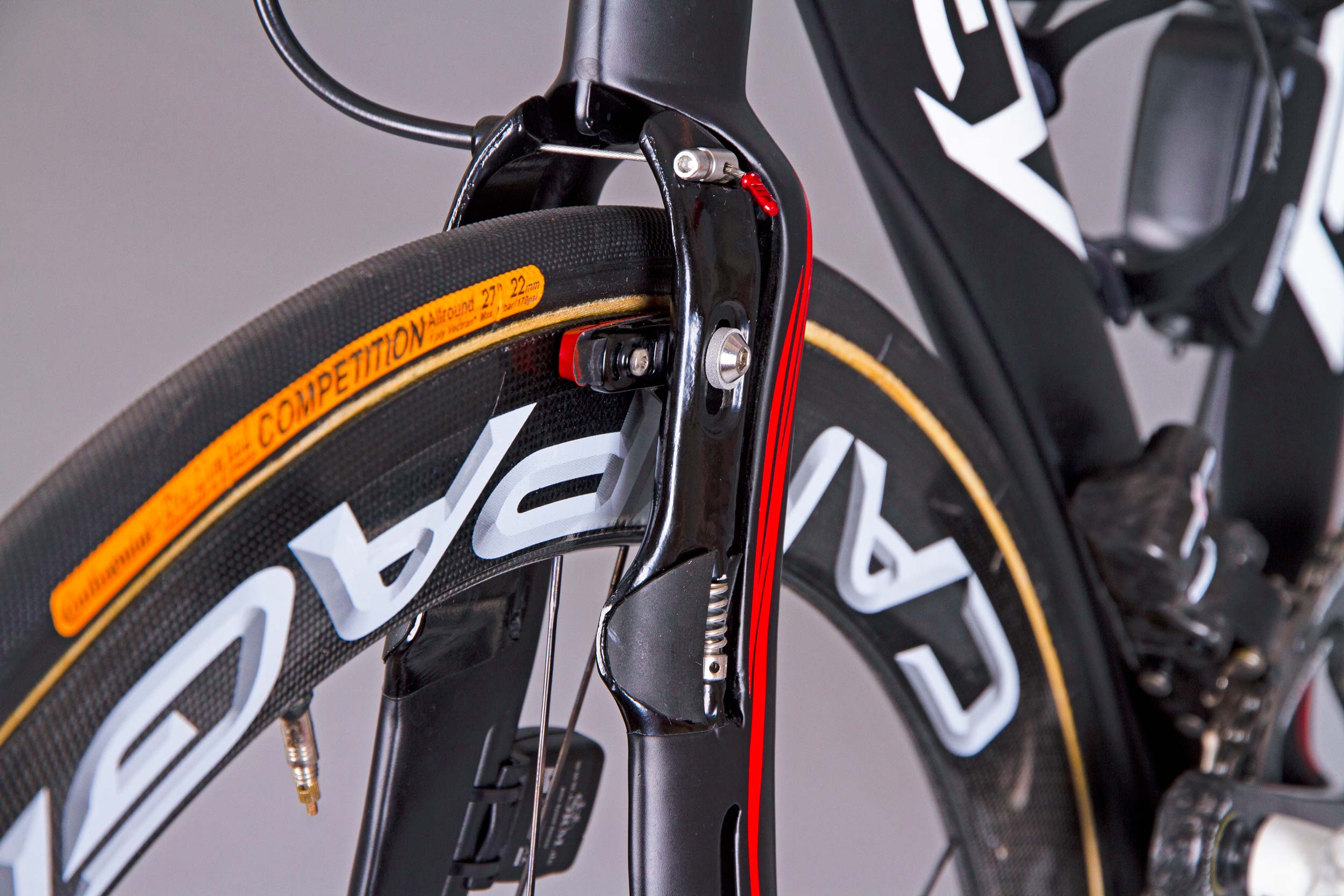 Ridley was one company that experimented with brakes to make bikes more aerodynamic around 10 years ago. The ‘V-brake’ style calliper was built into the Noah’s frame (above) and fork (below). 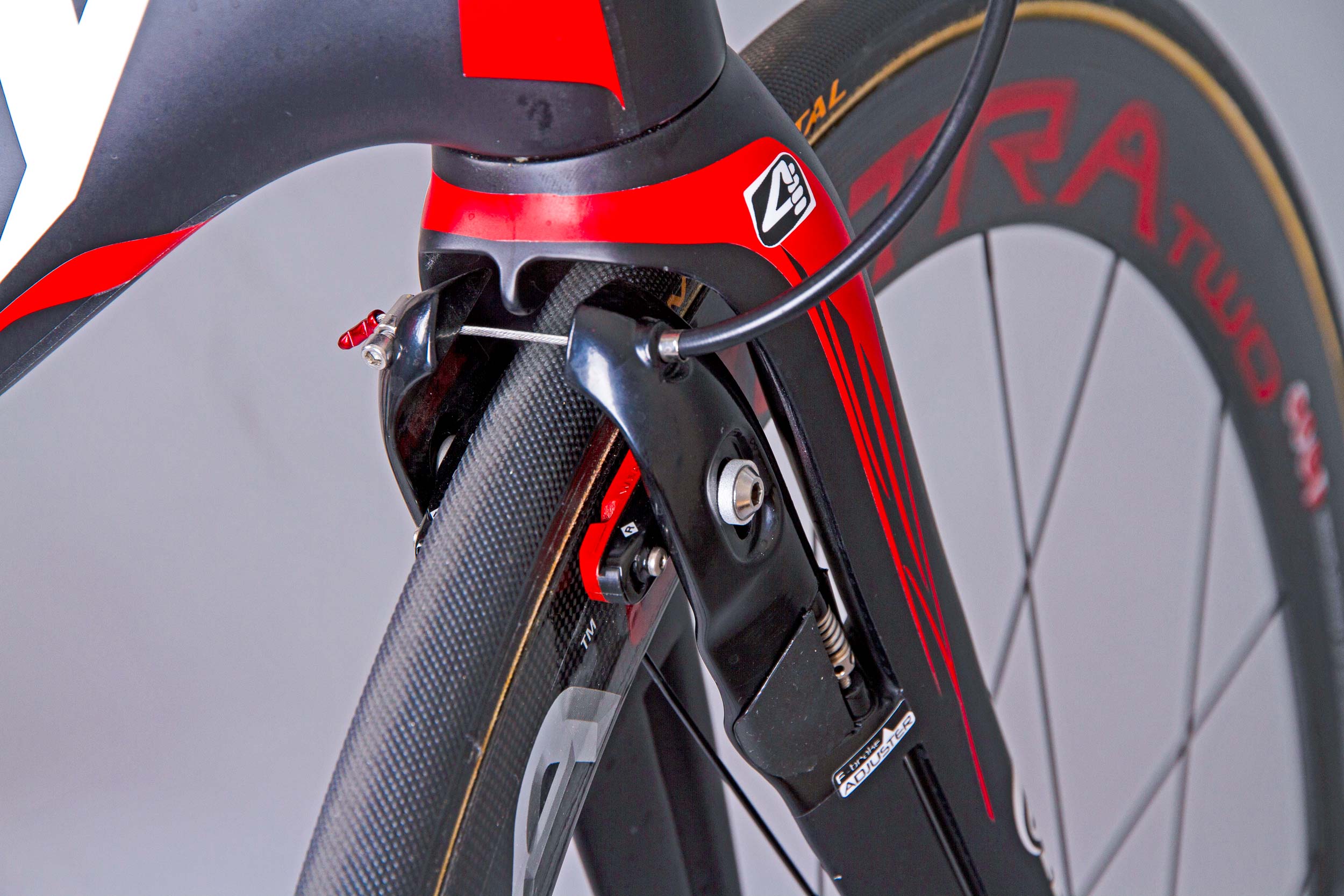 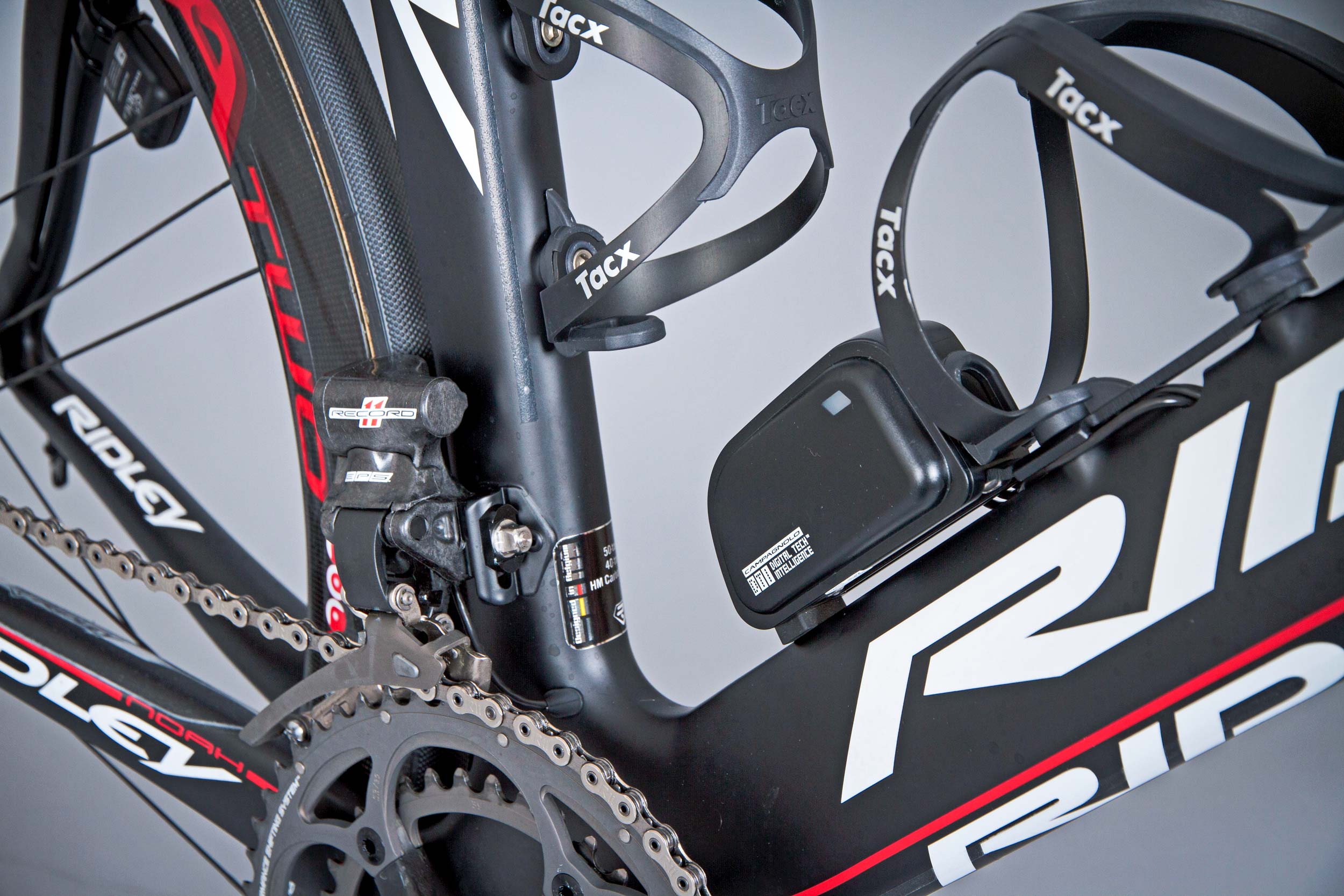 Campagnolo’s EPS electronic shifting system was introduced around the same time that Adam Hansen first started racing bikes with the Italian company’s components. It featured a giant battery attached with a bracket fastened to down tube of the frame (above) and a junction box fastened underneath the stem (below). 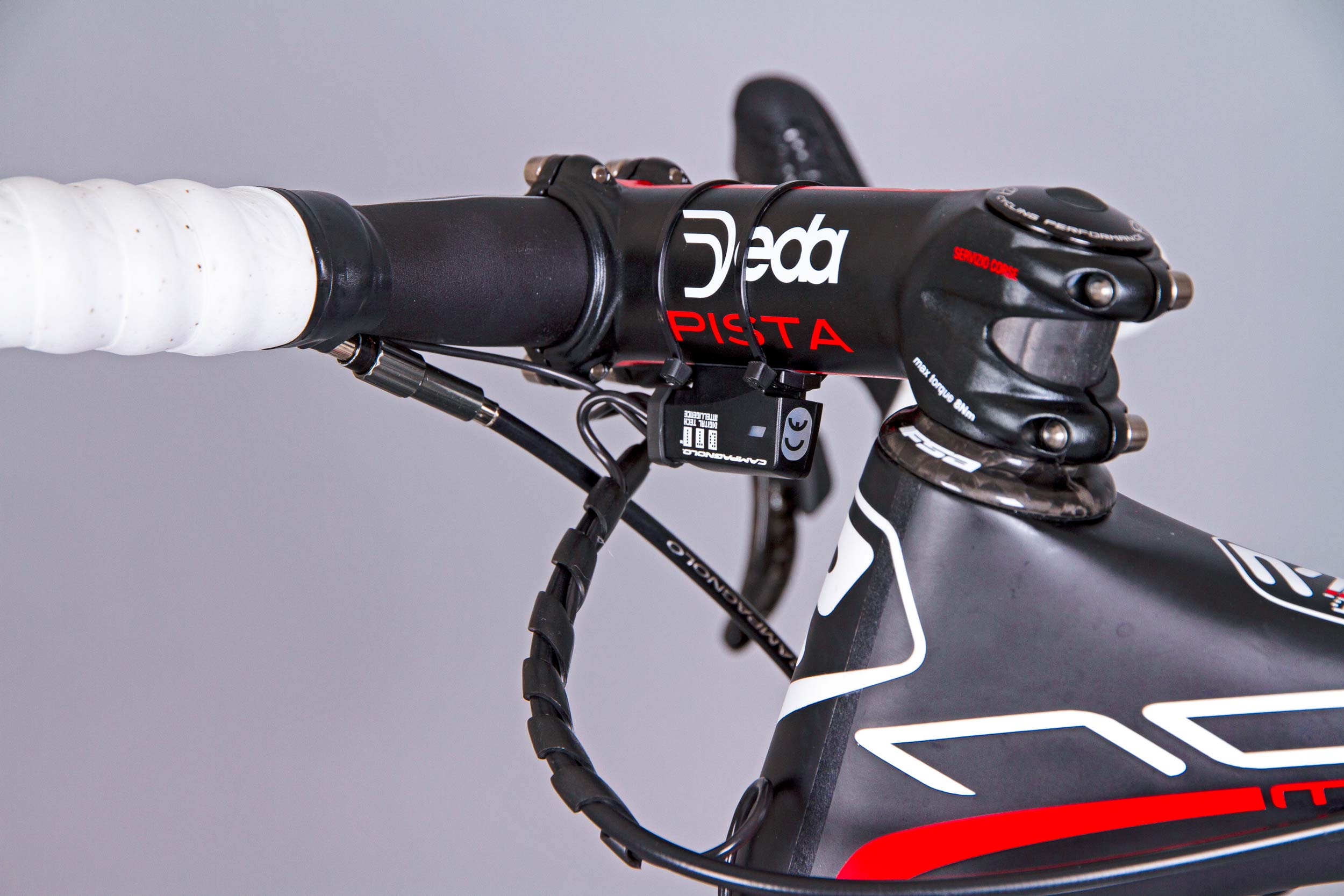 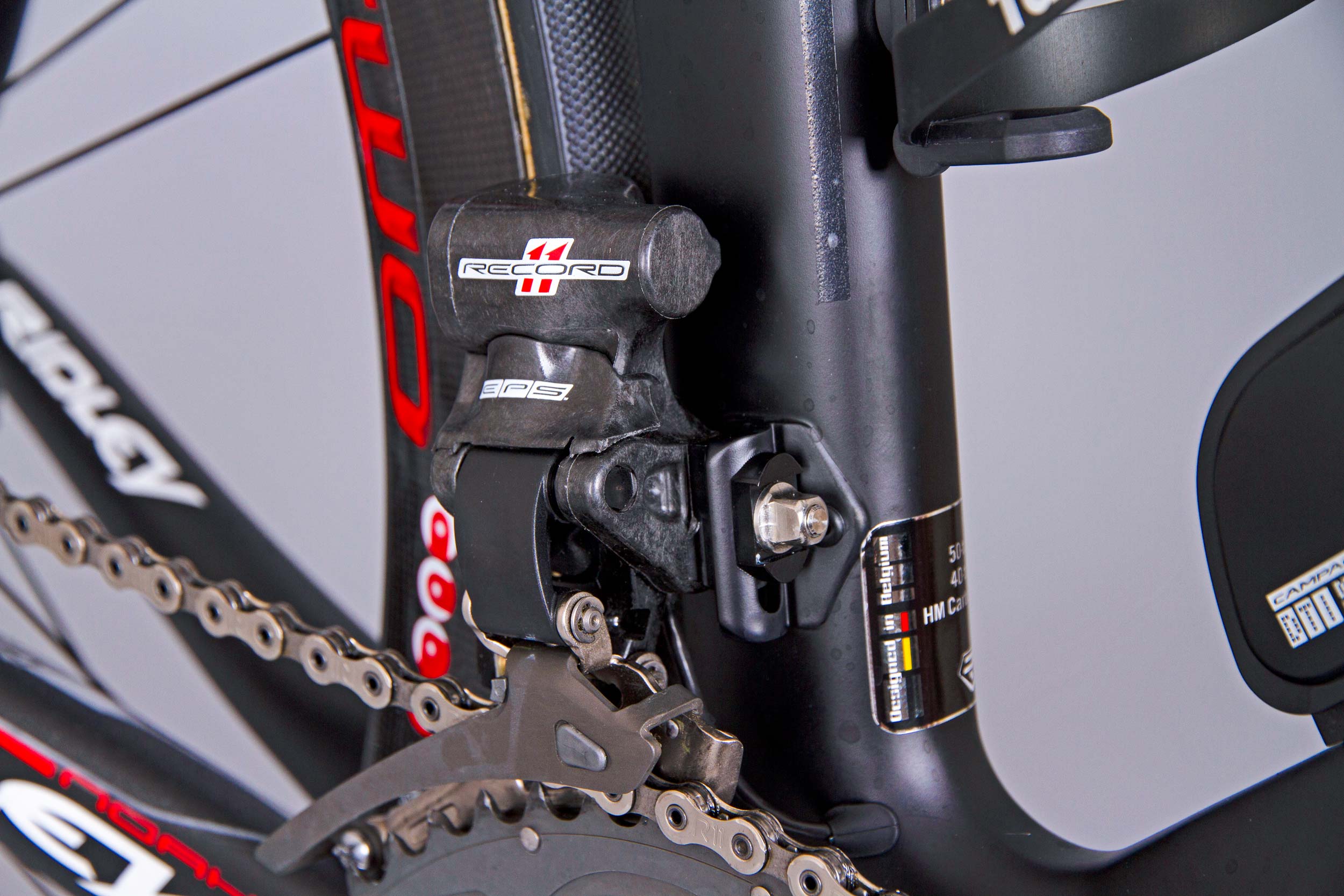 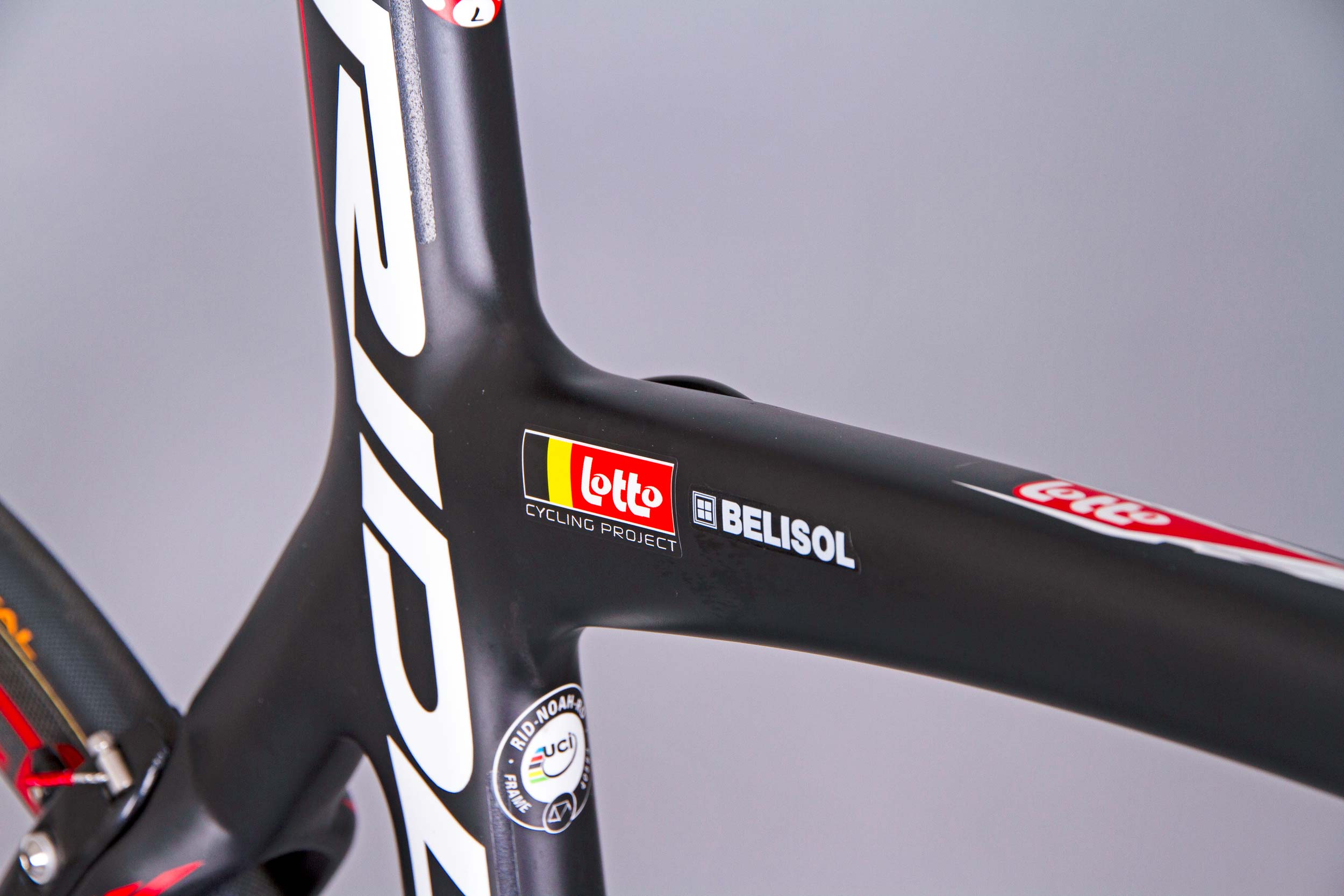 If you have ridden a Ridley Noah, or worked on the bike as a mechanic, or would like to know something about Adam Hansen, let us know by leaving a question or comment on our various social media channels. 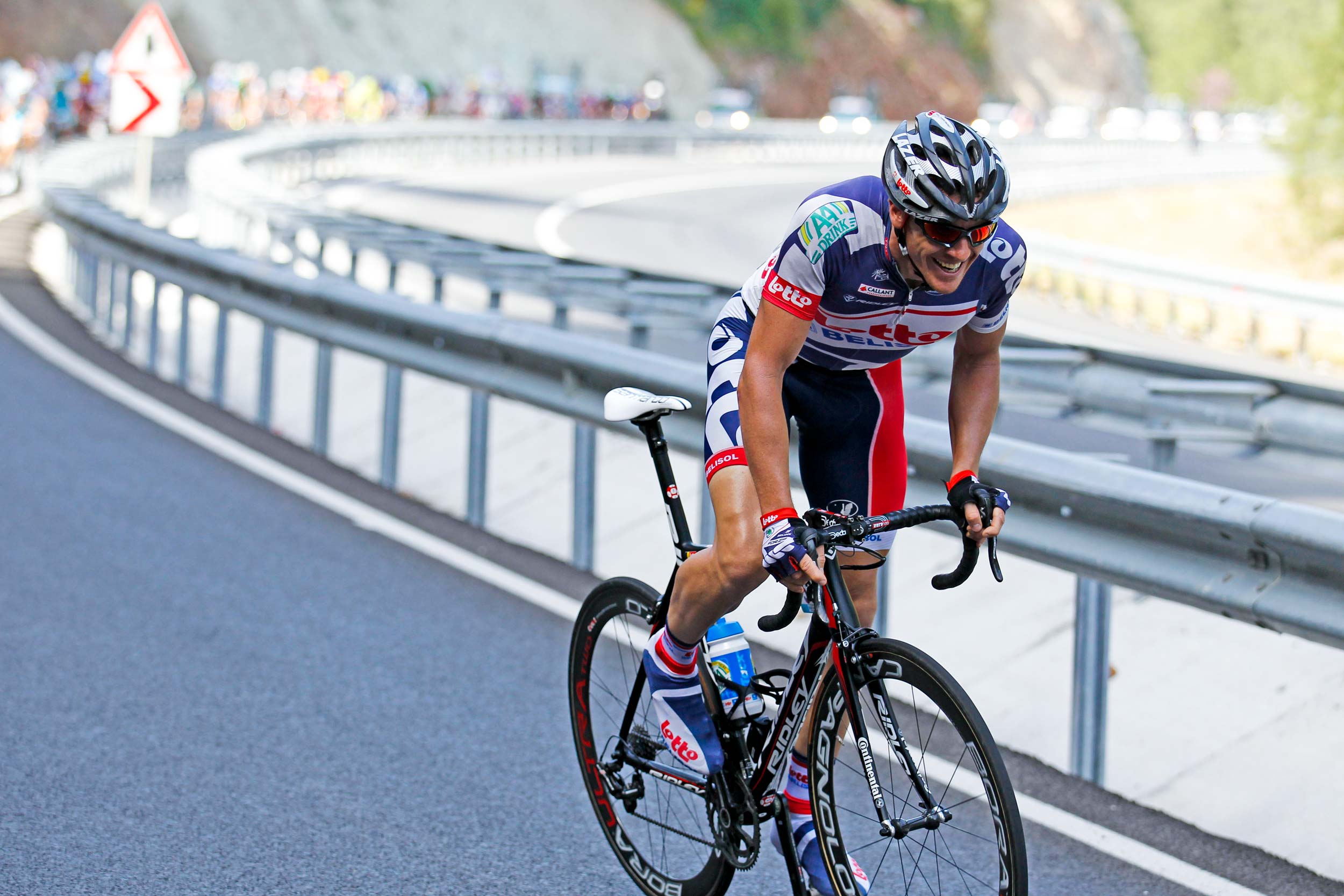