When the BMC brand first came to Australia in 2004, the Team Machine SLT01 begged for attention. Here is the review about a particularly memorable bike… 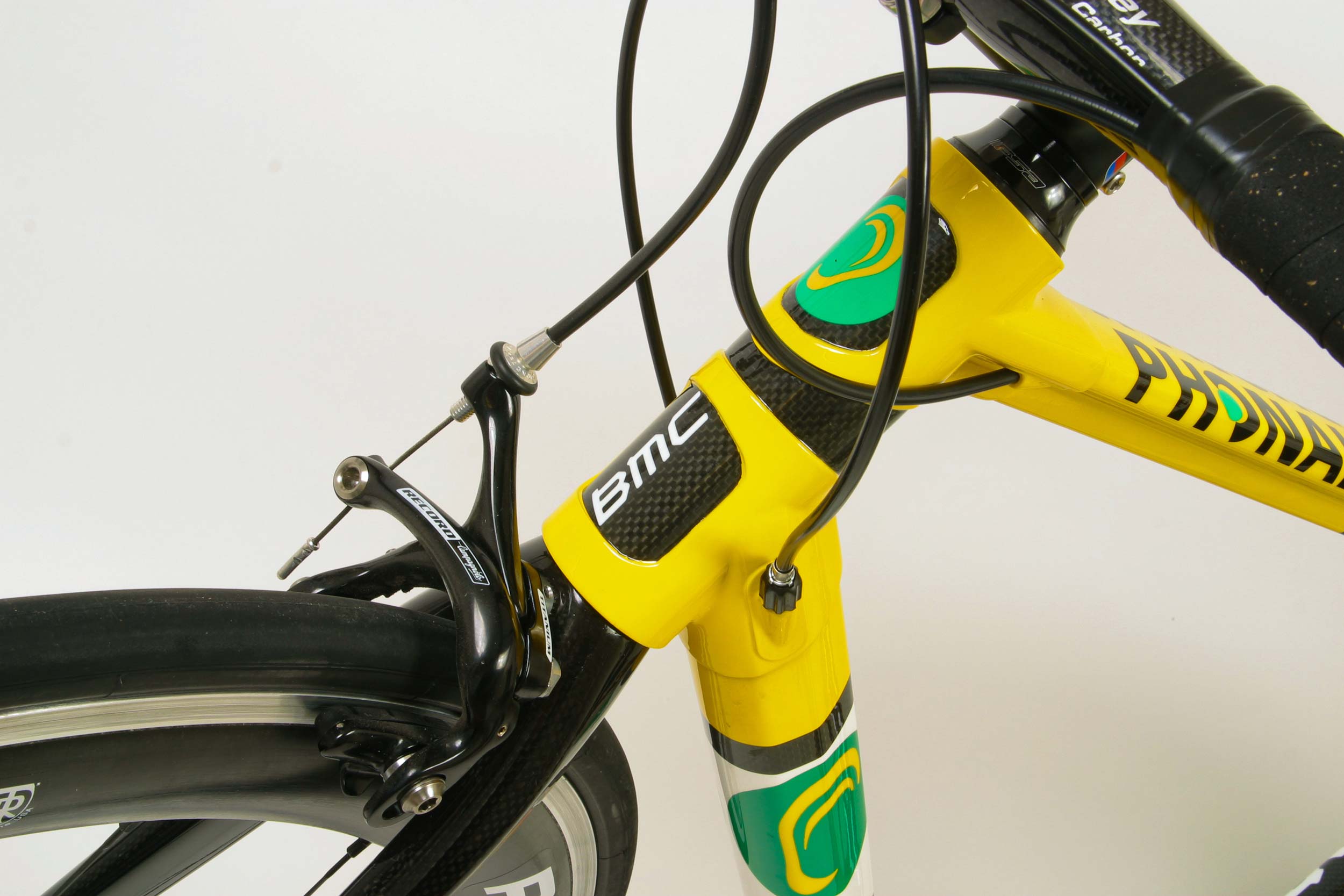 Rarely has there been such anticipation surrounding the prospect of receiving a bike for review as there was for the BMC Team Machine. When the offer came to ride one, I jumped at the chance.

New to Australia in 2004, the Swiss brand has been around for 10 years and its road range has recently been displayed around the world by the Phonak team. 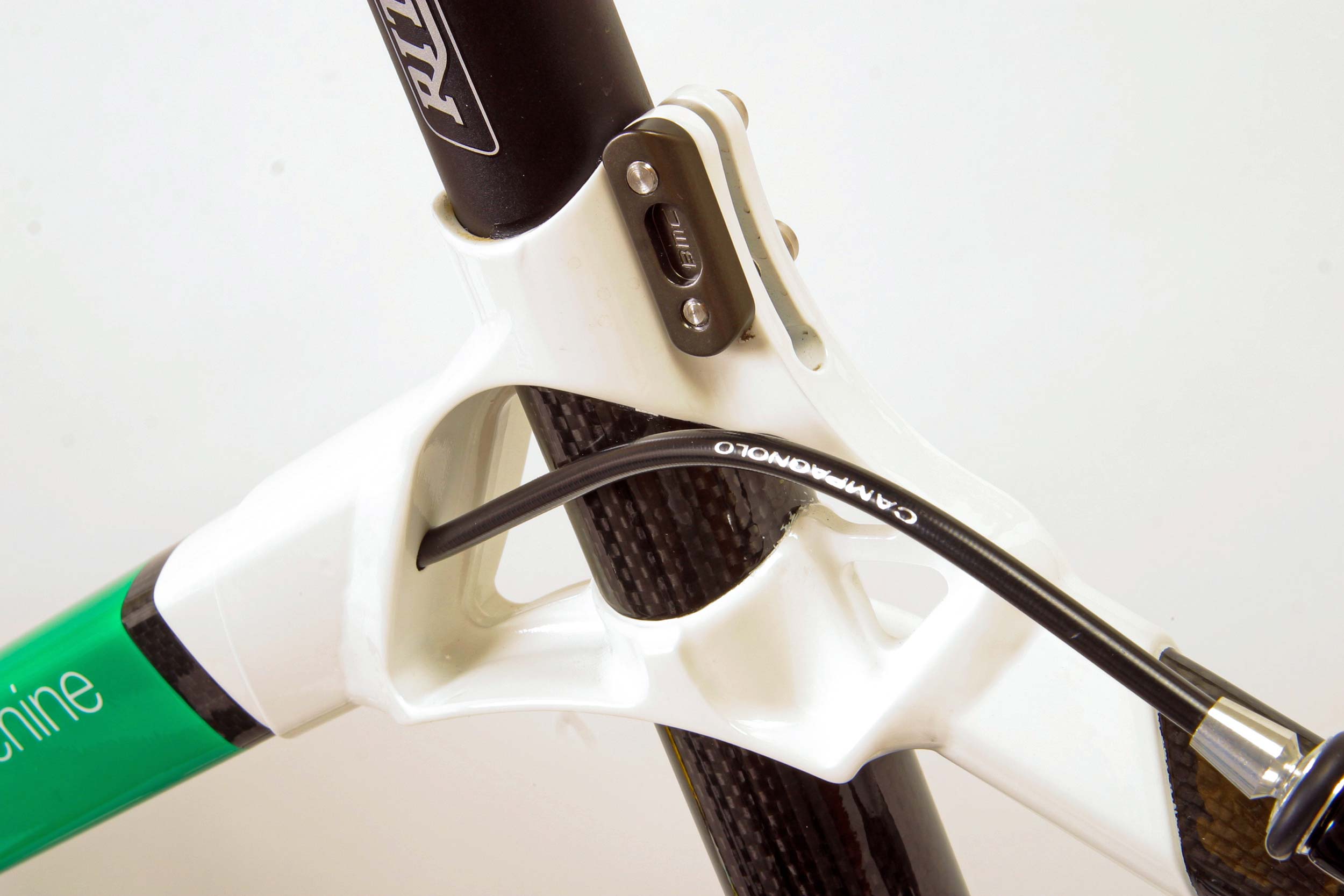 One of the major points of interest is the junction at the top of the seat tube. BMC’s patented Cross-Lock Skeleton is made of aluminium and it allows the Swiss manufacturer to offer the Phonak team bikes which have an integrated seatpost (ie. the saddle fastens directly onto an attachment at the top of the carbon tubing). It also means the exit of the rear brake cable is as neat as can be.

A few adventures on the bike supplied by the distributors at the time, Dirtworks, was all it took to know I wasn’t the only person keenly awaiting an opportunity to try what Tyler Hamilton and the boys had been racing…No matter where I went on the BMC, it prompted a similar reaction.

“What a great lookin’ bike!” Thanks, alas it’s not mine.

Then came the questions… 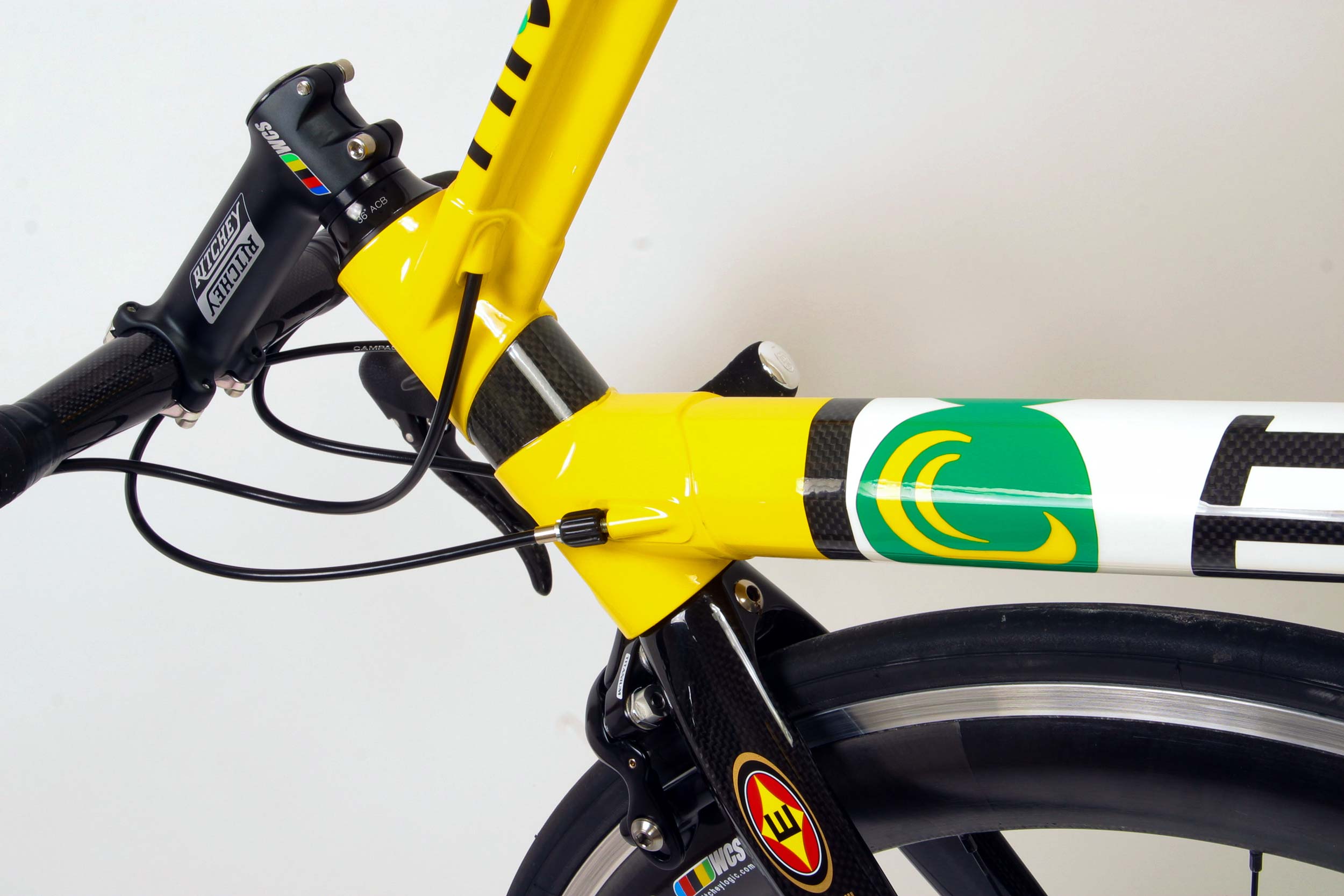 This illustrates the unique shape of the carbon top tube. With a flat top section and ‘pinched’ ridge underneath it is yet another aspect that attracted attention. All cables are internally routed. It’s not only tidy, it eliminates the chance of cable rub spoiling the finish.

Initially I responded with long answers which were full of the enthusiasm I had for a bike which impressed me from the moment I first saw it. But it wasn’t long before I opted for brevity instead. 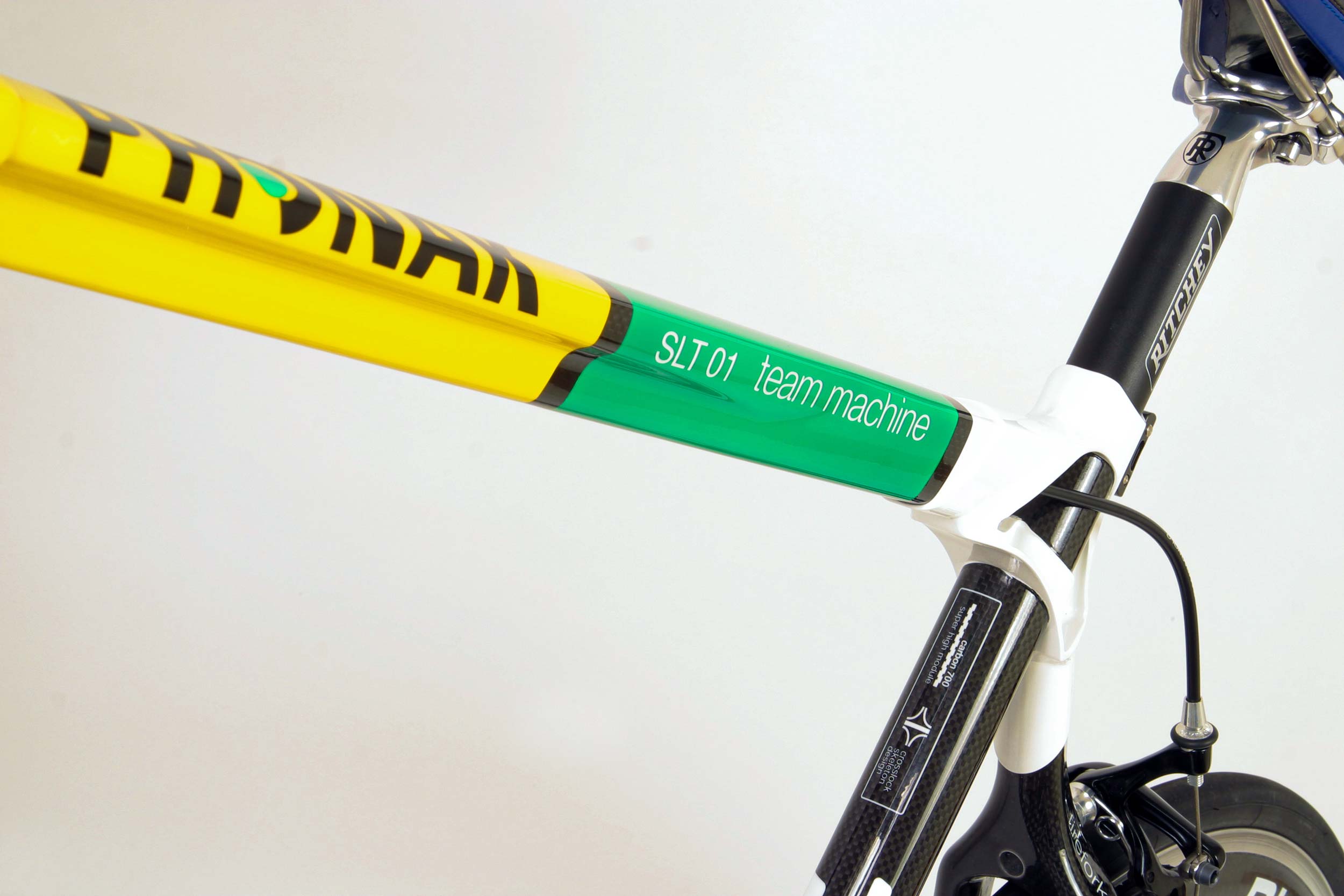 Another angle of the Cross-Lock Skeleton and the interesting shape of the top tube. It’s easy to see how natural the progression of the seat tube would be for the lightweight bikes that BMC have made some members of the Phonak team. 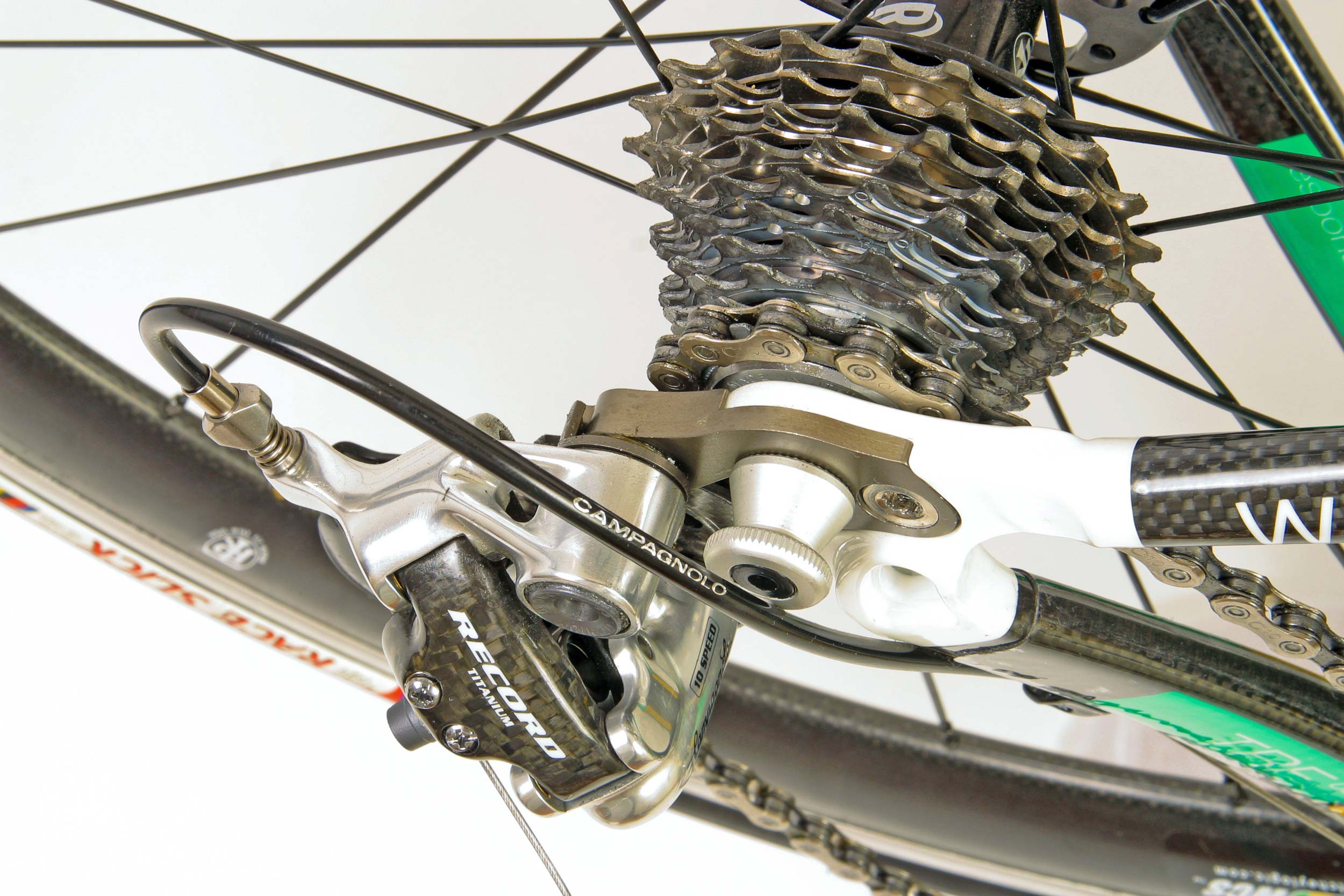 The replaceable derailleur hanger is made of aluminium (even if it appears to be titanium). It was bend slightly in transit from Switzerland to Australia but was easily fixed at the local shop. The seams between the carbon stays and dropouts are immaculate. 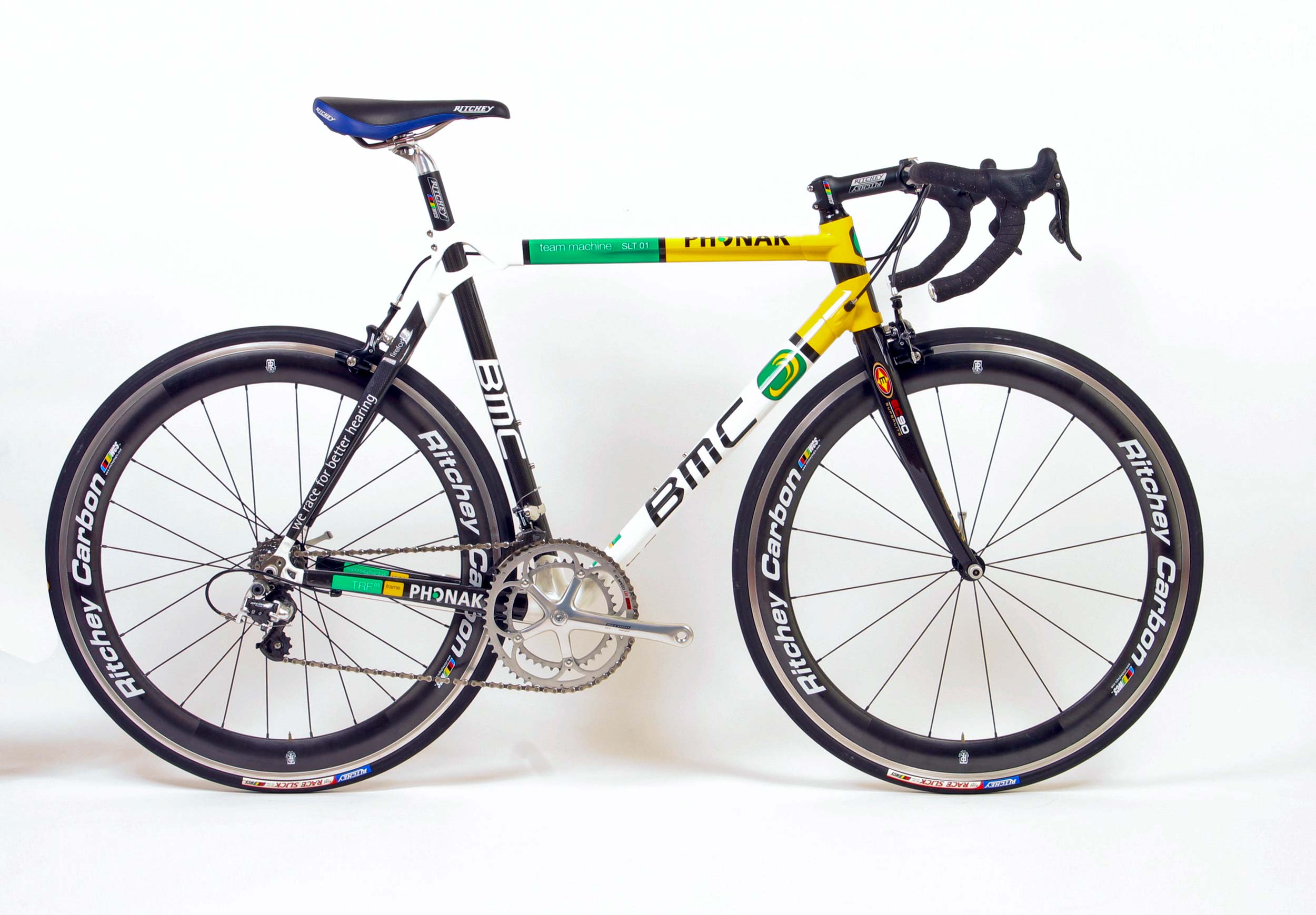 It seems everyone had at least 10 questions about the bike which has caused quite a stir because of its revolutionary design.

Here is an edited version of my reactions to the 10 most common queries:

It’s wonderful to ride. The position is ideal for my height (179cm) and it has a real feeling of stability that gives me confidence on even the fastest descents.

I felt comfortable immediately and simply looking at it made me want to ride more often and further. When I did, I soon realised that carbon-fibre can in fact be silent. I love that because it’s a great shame when a great ride is ruined by a creaking sound emanating from the bottom bracket, headset or anywhere else.

2. How does that seat tube work…

No, this model doesn’t have an integrated seat tube but some team bikes do. Production models, however, will not have this set-up at least until the end of 2005.

This bike has a 31.6mm Ritchey alloy post which Dirtworks wish was a carbon one, but they ran out of stock.

Their preference was more for aesthetic purposes than anything else and I can understand why. But when it comes to comfort there’s no need for a carbon post.

The frame soaks up road shock before it reaches the saddle. The unique top tube, seat tube and rearstay junction, can make it seem as though the post is the same size as the carbon it slots into. It’s not.

With the seat post removed you can see the seam of the carbon seat tube and BMC’s patented aluminium Cross-Lock Skeleton junction configuration. It sounds like a mouthful but this is one element of the frame’s design which makes the Team Machine so distinctive.

When questioned about this part, Campbell Whiting from Dirtworks responded: “It might not be too pretty but it’s effective.” That’s his opinion. I like the appearance. As Kath or Kim might say, it’s different, uhnuusuahl!

3. Is that the same as the team uses?

There’s a reason for the Phonak decals – complete with the (ugly) yellow ear in a green circle logo – and the title Team Machine. This is what the team uses.

The bike Santiago Perez rode to second place in the 2004 Vuelta is almost identical.

The differences were size (Perez’s is a 51cm), the colour of his Campagnolo Record brake callipers (black on the test bike), the seat post (a carbon Easton option for Perez), and the cranks and wheels.

At $9,750 the bike isn’t cheap but nothing has been spared in the spec. The full Campagnolo Record ensemble was to include the Italian company’s carbon cranks as well, but there were none in stock when Dirtworks built this beauty. And the Ritchey wheels (remarkably similar to Zipp 440s because they’re actually made by that company) alone are selling for $3,299.

5. How are those wheels?

The wheels are outstanding. I normally ride Campag’s low-profile Neutrons (on a Cannondale CAAD7 Black Lightning I regularly rode at the time) and I like them for their comfort and strength but the Ritchey wheels rolled so nicely that I’ve begun to reconsider my current choice.

These wheels cut the air to make it seem like you are second in a paceline even on solo rides. Yeah, you can feel a crosswind but it’s not dramatic and they certainly didn’t affect the comfort of the ride. Love ’em!

Most of the frame is indeed made from carbon-fibre. The exceptions are the aluminium dropouts, the Cross-Lock junction and the CNC-machined aluminium bottom bracket shell.

The frame alone is 1,350g and the complete bike (including Speedplay pedals, as per Phonak’s spec) is just 7.73kg. Yeah, it’s light.

8. Are there other colours?

Green and gold is going to be the main colour scheme offered but it will also be sold in black. Limited-edition versions have been made in Swiss colours (red and white) and the Slovenian champion Tajec Valjavec rode a beautiful blue and red version during the 2004 season.

Alas, these prettier options won’t be part of the Dirtworks catalogue.

This bike made a big impression. I don’t just like it, I love it. It helps that it fit so well, but it’s the quality of the ride that’s hard to beat.

Once the rear derailleur tip was tweaked back into correct alignment (a simple procedure which was required because of a rough air-express delivery) everything worked flawlessly.

With the accurate shifting of Record’s gears, the stunning aerodynamic influence of the wheels and a modification to utilise my personal saddle (a Fi’zi:k Arione), I couldn’t have been happier.

That frame is what makes this bike so special. Even if you ignore all its unique attributes, the Team Machine is a bike that does all the right things when you’re out on the road.

It feels bomb-proof; there’s no rattle nor anything delicate about the BMC. I could feel no flex in the frame and climbing was a breeze… in fact, every ride was done with ease. It’s a bike that makes you feel stronger than you are and begs to be ridden longer than you’ve got time for.

Alas, I can also report that it is bus-proof. An altercation occurred while riding along Sydney’s Anzac Parade. The bike and I went down and the bus driver didn’t flinch (I think he even grinned). Result? Some skin off my knee, a bruised ego and no damage to the BMC.

I’ve ridden a lot of bikes and this is definitely one I’d like to hold on to but I won’t be keeping it. Dirtworks need it to show their dealers just what a funky new brand they are introducing to the Aussie market. But I am considering how I can afford one. If I find a solution to that problem I won’t, however, be buying a BMC in this colour scheme. I like what green and gold represents but just don’t want it to be the colour of my bike. 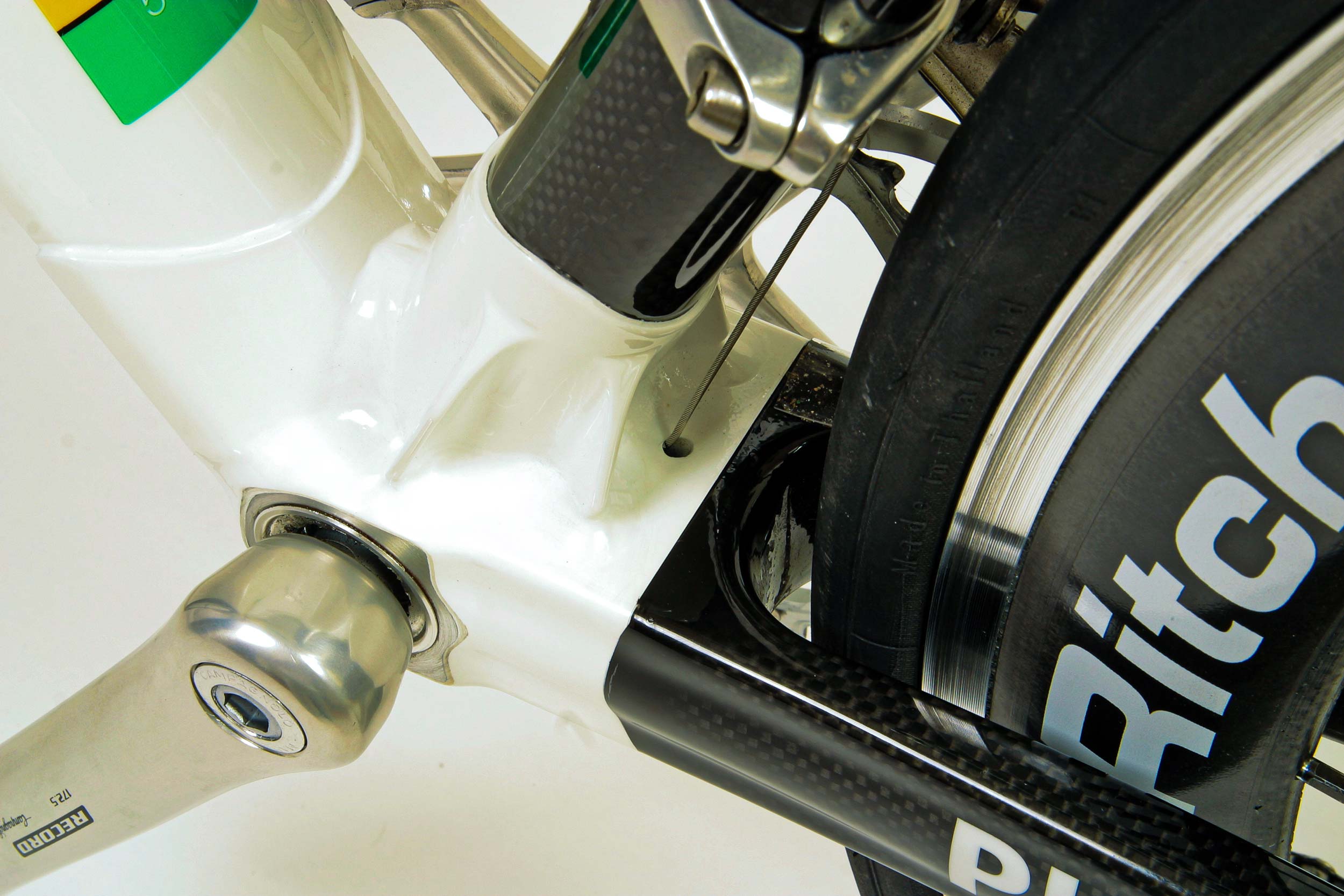 The top section of the CNC-machined aluminium bottom bracket features four reinforcing plates. The bulk around this region helps minimise flex. The join of the aluminium shell and the carbon downtube is so large that it nears to the inner chainwheel but not too close. 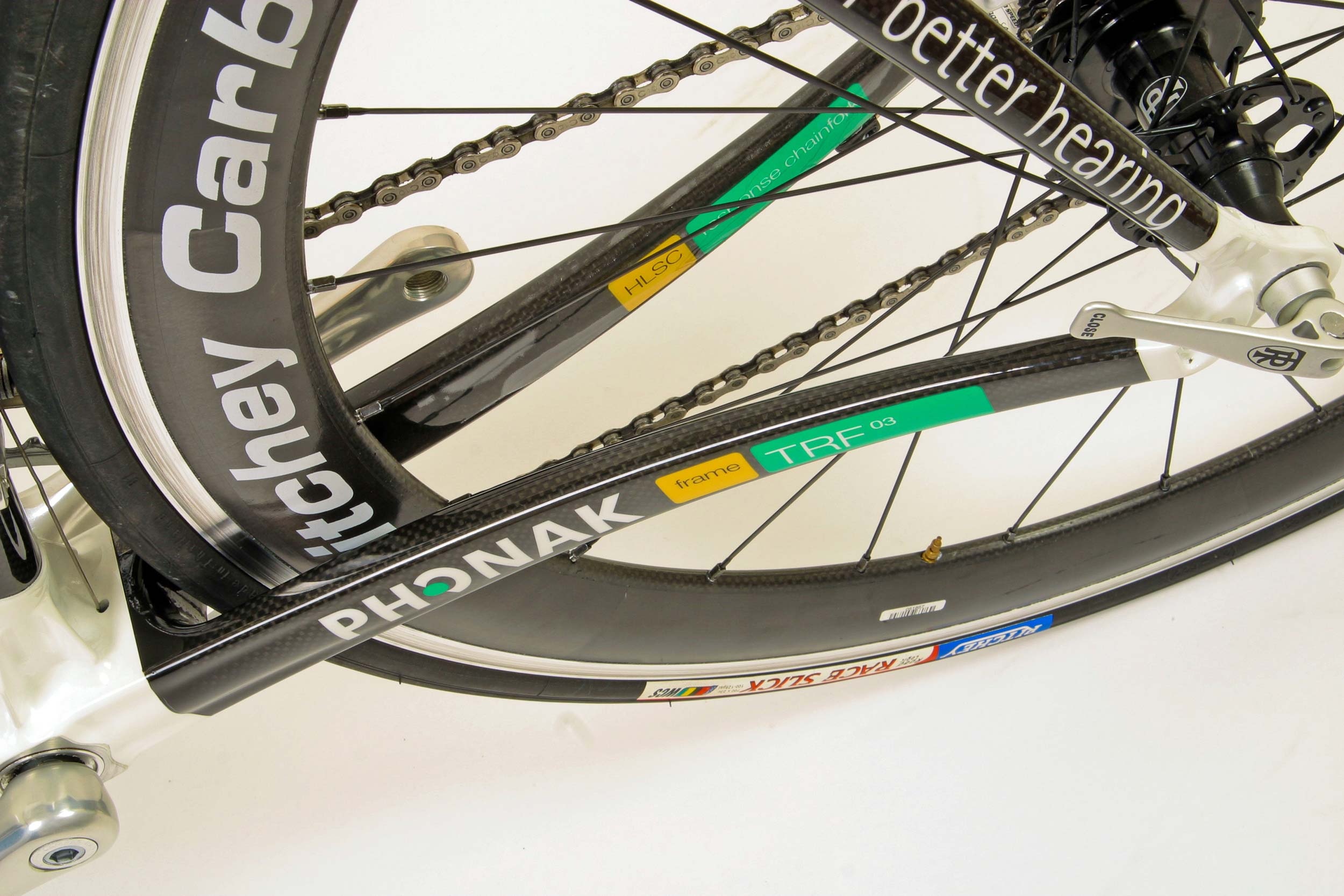 With a flowing curve to the deep, flat carbon chainstays, the back end looks beautiful. 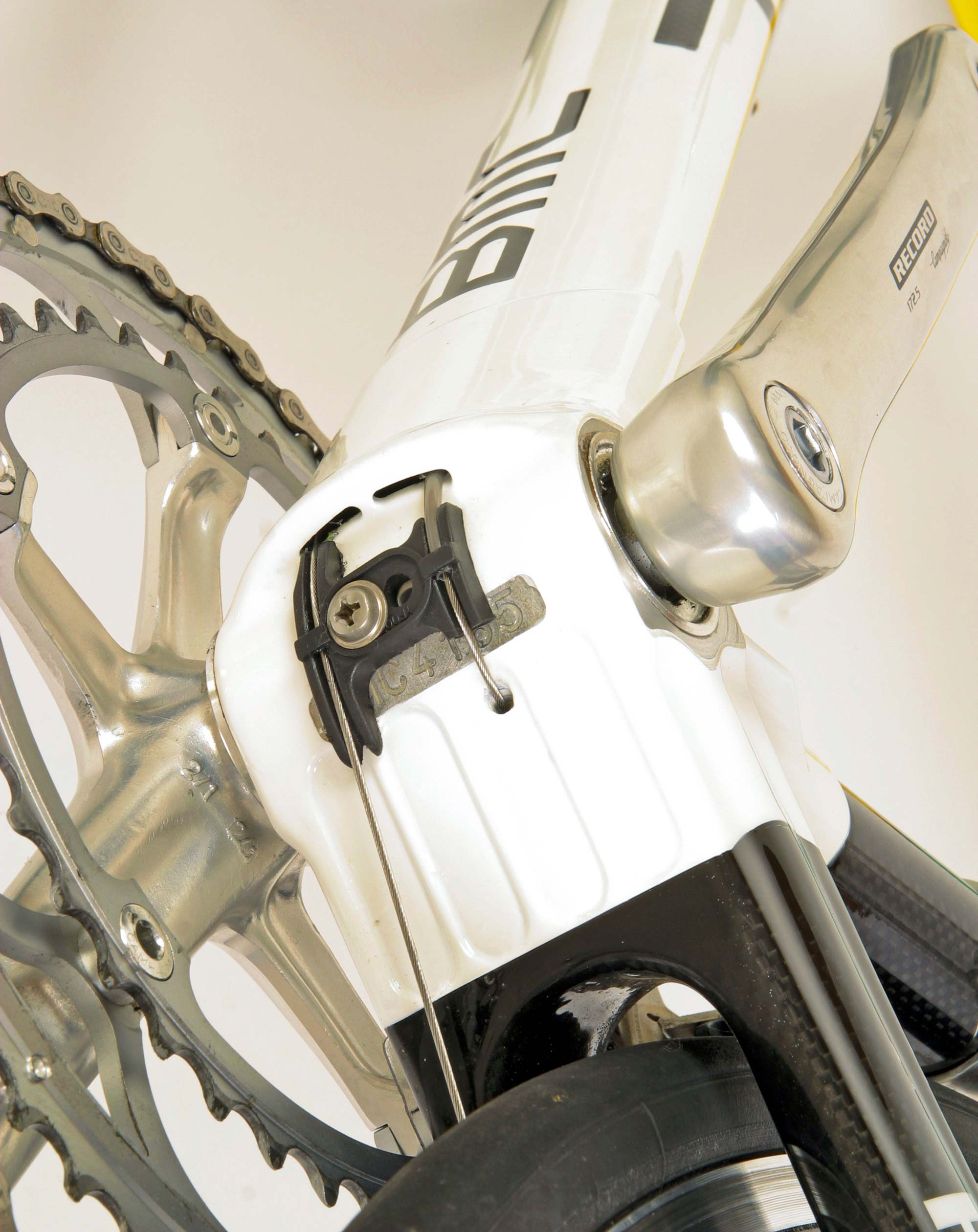 Everything about this bike is tidy. The exit of the derailleur cables from the enormous down tube is certainly slick. The bottom bracket shell is a surprise when you first see the frame but it doesn’t take long before you start thinking how logical it all is.