We continue to explore our archives and find items from the past that are still of interest today. While we take a look at the evolution of time trial bikes, we revisit a review of the revolutionary Giant Trinity from 2010… 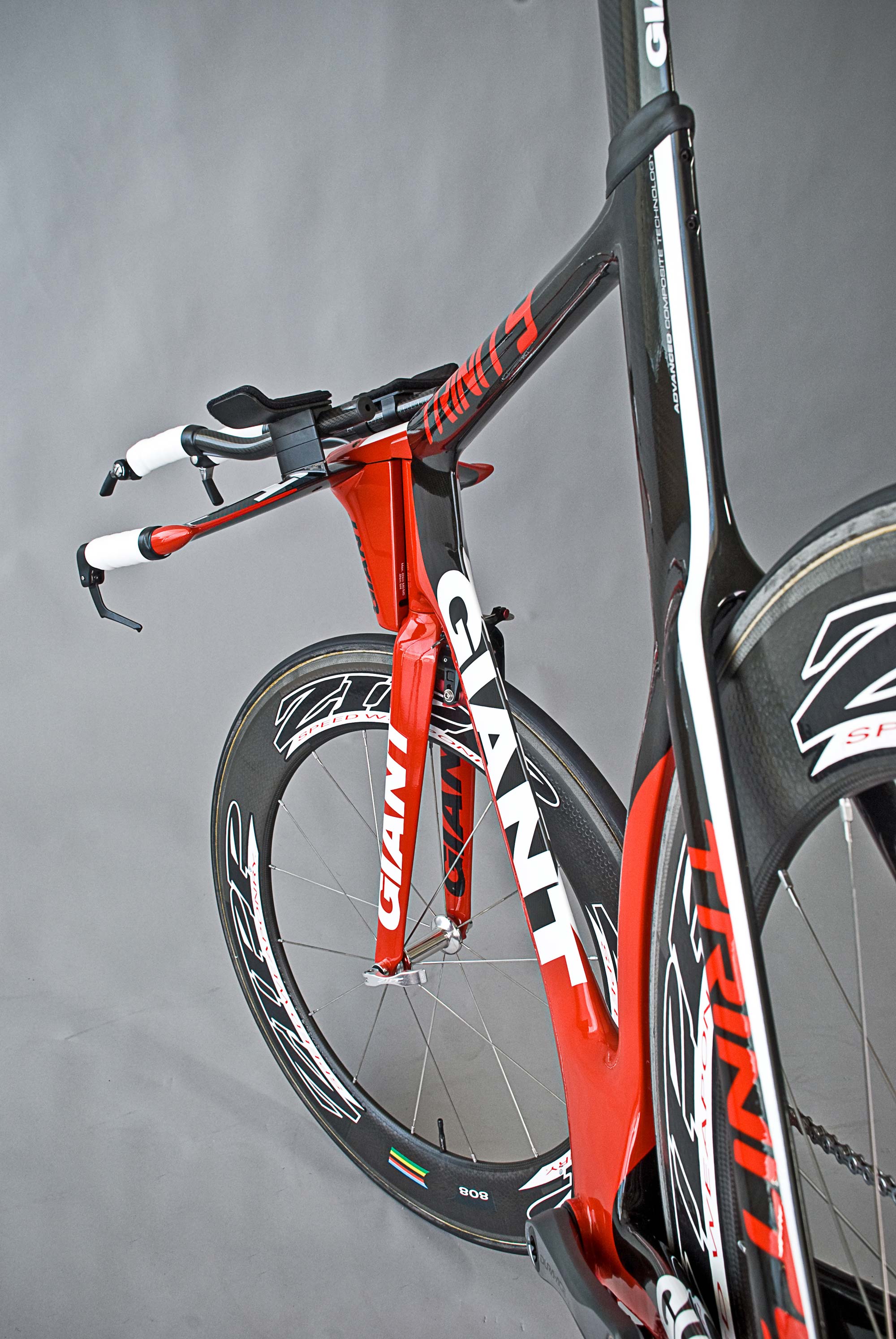 Manufacturers of TT bikes are faced with difficult decisions. Consumers want the fastest and most advanced products and pricing is very competitive, yet there are elements guiding these designs that are beyond the control of builders and customers. This review is not intended to be a political rant but the principles of regulation need to be understood. Rulings, interpretation and enforcement is the job of cycling’s governing body – and, alas, manufacturers are at the mercy of the UCI and its decisions. 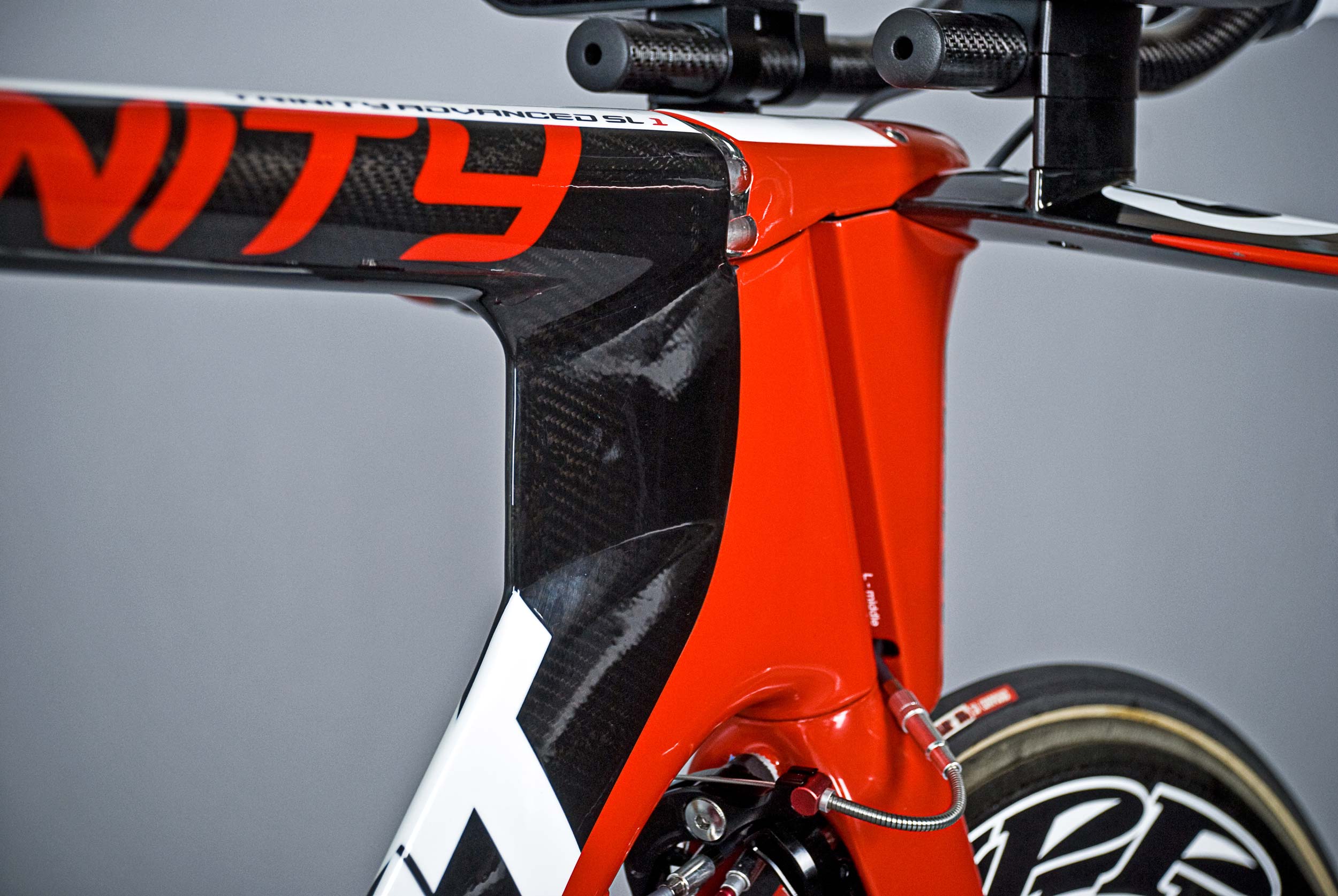 Upper stem length changes with each size. The middle height was chosen and had an effective length of 100mm. Gear outer runs through the bar into the cone.

In 2010, the Giant Trinity Advanced SL 1.0 was the latest bike deemed “illegal” for UCI sanctioned events. The frame complied with the rules upon its inception in 2009 but the decision was revoked after a re-evaluation of the frame overturned a year-old agreement.

Similarly, the Specialized Shiv (of 2010) was also banned – after having been used to win a UCI world title and many other races – because of an aerodynamic nose cone.

Giant’s fairing mounted to the front of the Trinity employs roughly the same concept.

Equipment used in competition is monitored under the UCI’s technical regulations with “primacy of man over machine”. 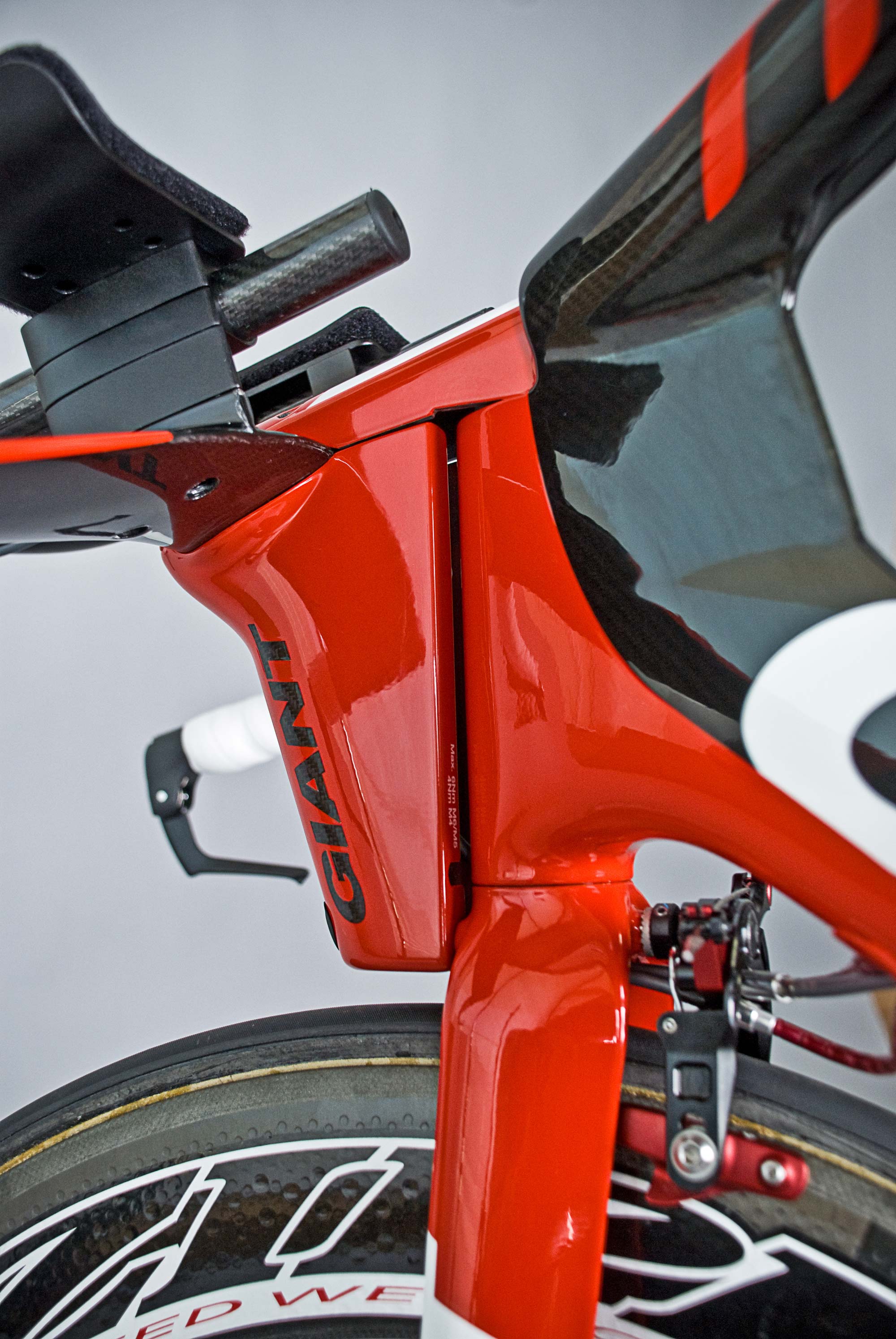 Integrating the front-end into a complete unit is key to the Trinity. All elements of aerobar adjustment must be analysed and offered in a simple to use system. A multitude of heights, angles and lengths can be obtained using the AeroDrive system.

A previous agreement stating the Trinity’s compliance with Article 1.3.0231 of frame, fork and AeroDrive handlebars and stem was changed. It was also affected by another regulation (Article 1.3.024) prohibiting the use of “aerodynamic assemblies and protuberances on the head tube”.

Giant’s lower stem – the piece bolted to the fork – was subject to noncompliance measures. Company engineers were managing the required actions and a revised model was released later in 2010. 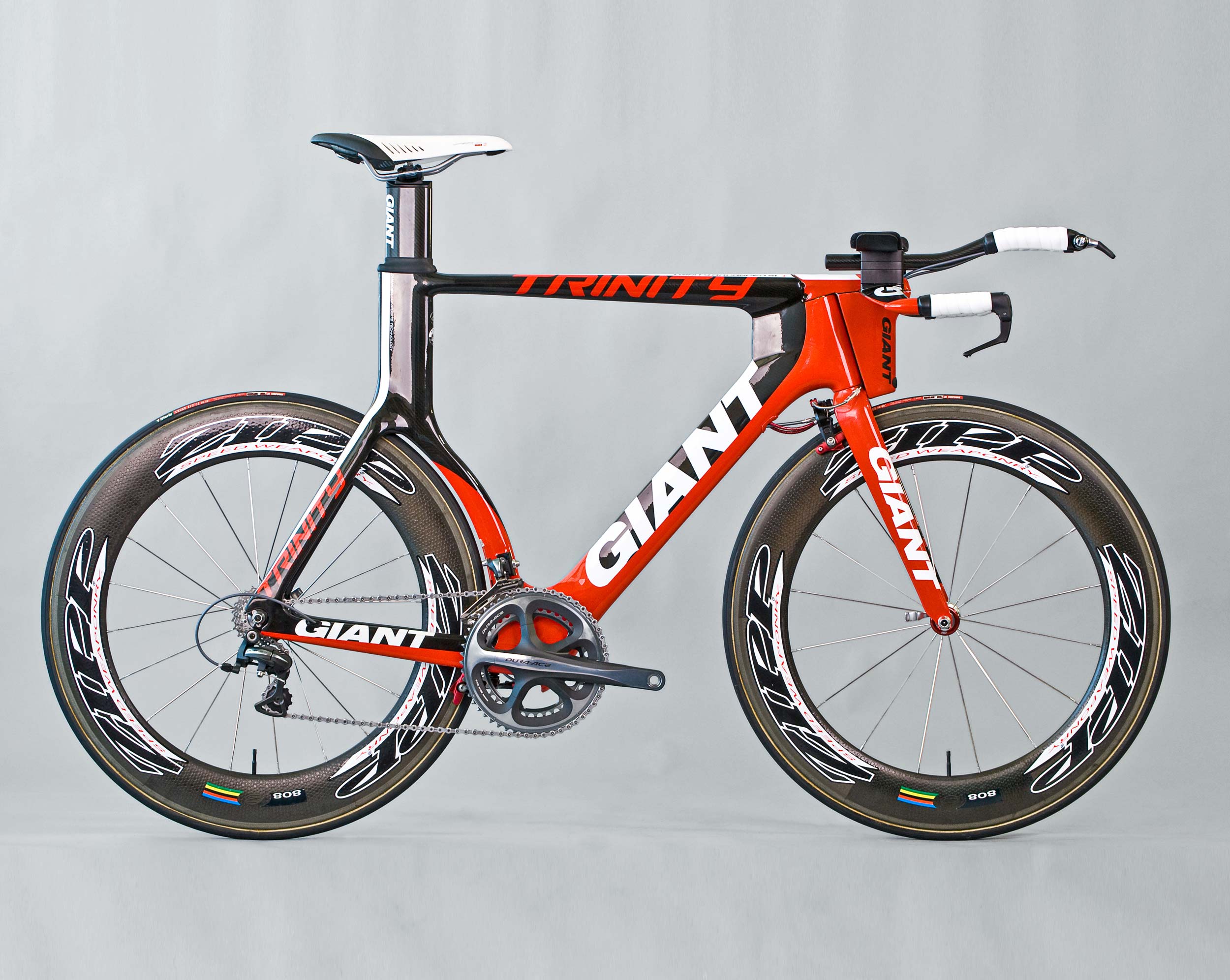 Overview of the Trinity

In 2010, the $9,999 Giant Trinity Advance SL 1.0 had three different heights of stem included with each bike as standard: low, middle and high. These affect the stack height of the handlebars because the length of the fork’s steerer tube is predetermined.

Stem size, Giant suggested, should be chosen by a professional bike fitter. The length of the upper stem changes to suit each size and is also dependent on frame size.

The AeroDrive controls have a wide range of adjustment. Base-bar height is fixed but everything else can be changed. (The photo of the bike above is fitted with 110mm.) 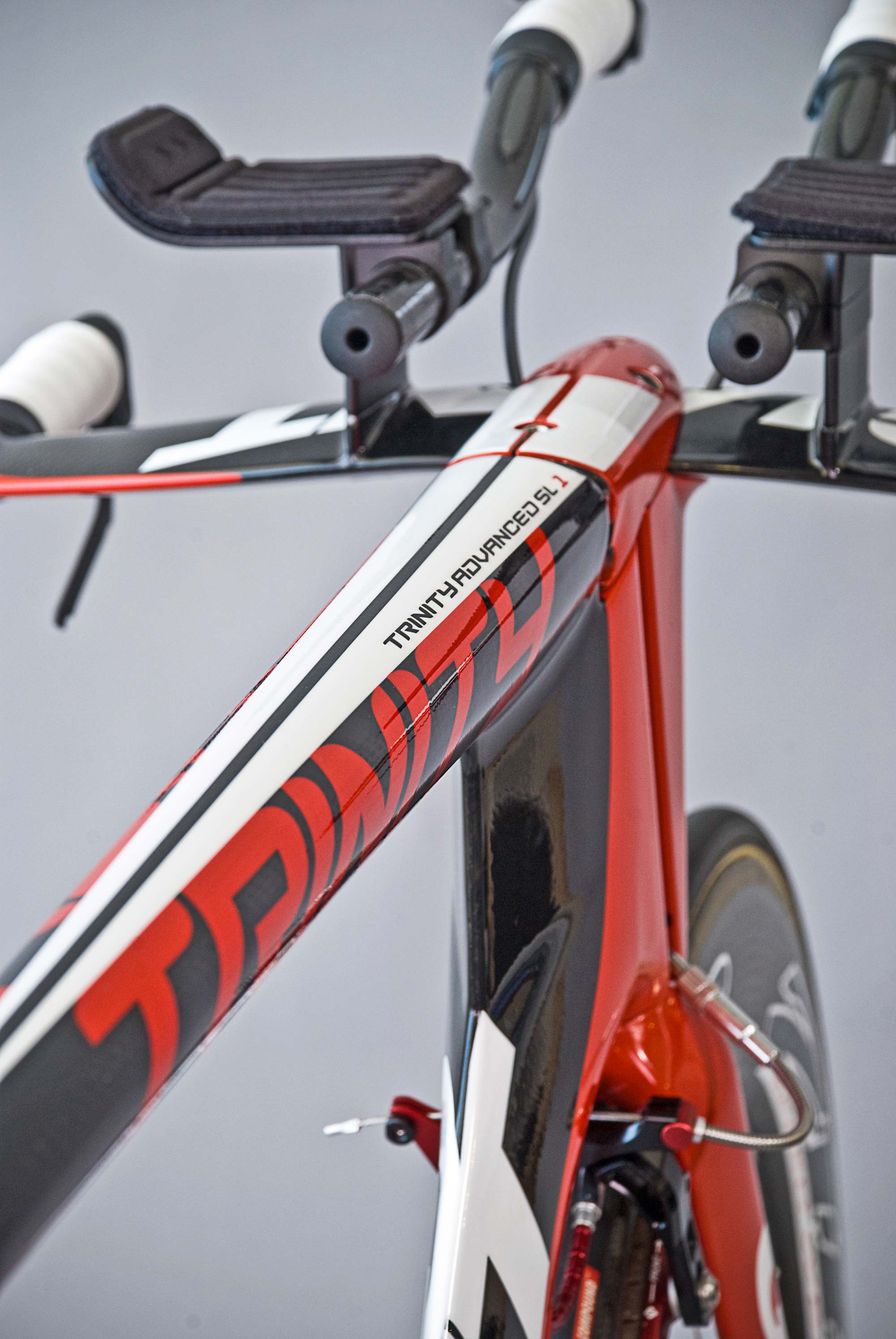 Aerobar extensions and pad height can be changed thanks to included spacing shims. They can be raised 40mm above the base bar. Forearm pads are then moved to a chosen location and rotated to suit. The distance between the aerobars is configured by exchanging the brackets between two options: 100 and 180mm. Incremental adjustment is made by rotating each arm inward or outwards. They slide easily in the clamp for correct forearm length.

Aerobar extensions are a standard 22.2mm diameter so the shape can be changed. Straight bars can help to get over the lever when shifting. SRAM was an instant hit. Shimano lacks a little in this regard. Some riders install the lever blade upside down to alleviate a reach issue. Shifting accuracy is perfect – even with the connectors and multitude of cables, the gear change is excellent. 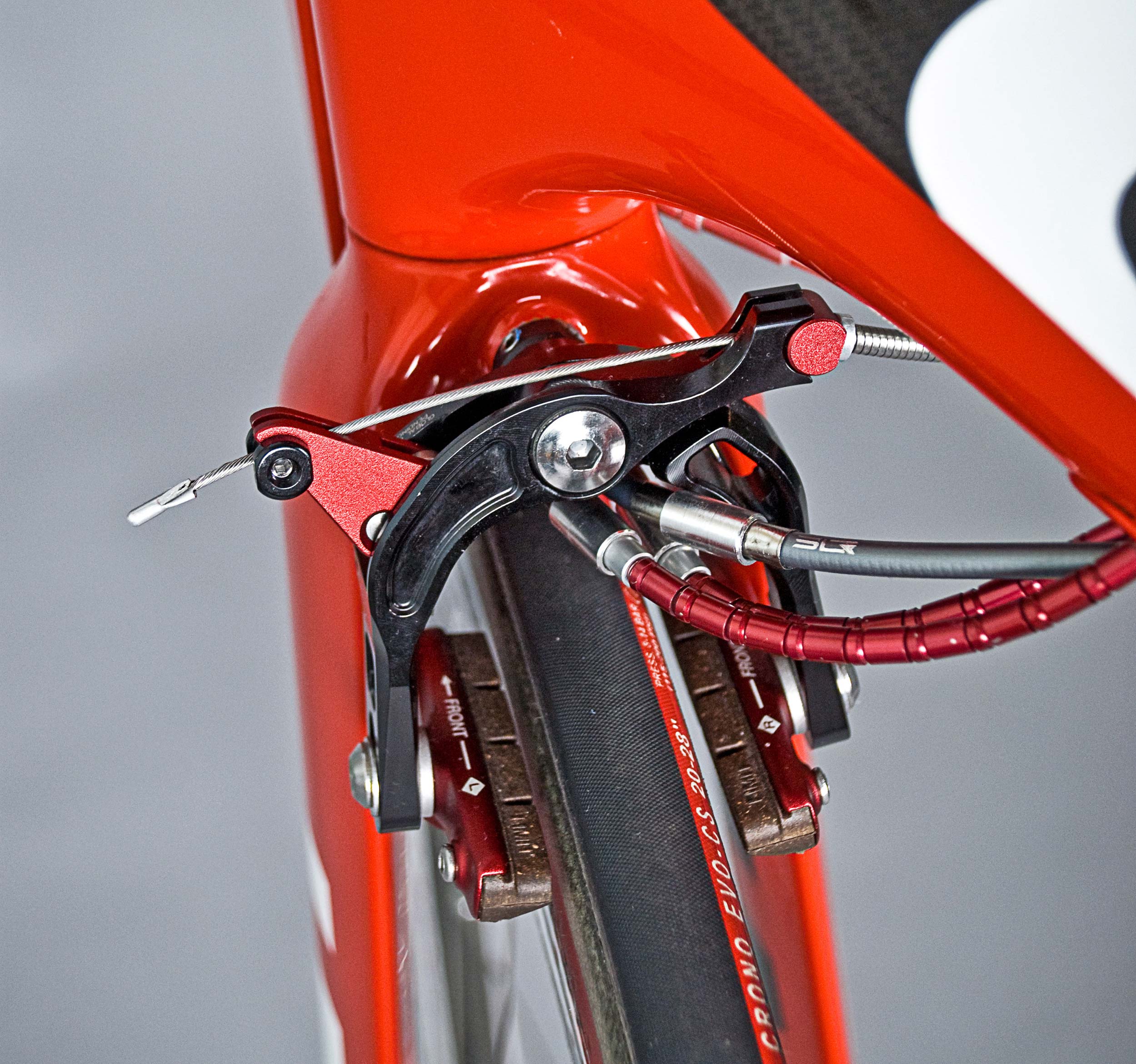 Giant’s response to the UCI

“When the Trinity Advanced SL was released it was considered ‘technically compliant’. During 2010 the UCI determined that it was no longer in compliance with its regulations. This was a reversal of their earlier decision.

“The technical rules breached had not changed; the UCI just changed their interpretation. The decision pertains to UCI time trial competition and does not apply to triathlon or Ironman events of any level.

“As a gesture of goodwill to consumers who purchased a 2010 bike with the intention of racing it under UCI rules, Giant offers a frame replacement at no cost to the customer. Qualifying consumers (original purchase owners) were offered the opportunity to swap the frame, fork and AeroDrive handlebars and stem, providing an application was presented by 11 June. Giant plans to supply these replacement framesets by October 2010 with the release of a revised UCI compliant frame and components.

“To compensate consumers for the inconvenience caused, we allowed them to keep their existing frame, fork and AeroDrive components.

“Giant will take a case-by-case approach to ensure customers who have purchased a 2010 model after 11 June and intend to race UCI-sanctioned events, will get a fair outcome. Information about 2011 products will be released in August and Giant will provide updates closer to the time of product arrival.”

The metal ‘ringed’ pieces are called EZ-Bends and run the length of the down tube. They are less affected by cable curves, made from steel for durability and can be joined to standard pieces of outer cable. Use sparingly and protect contacts with a rubber cover. 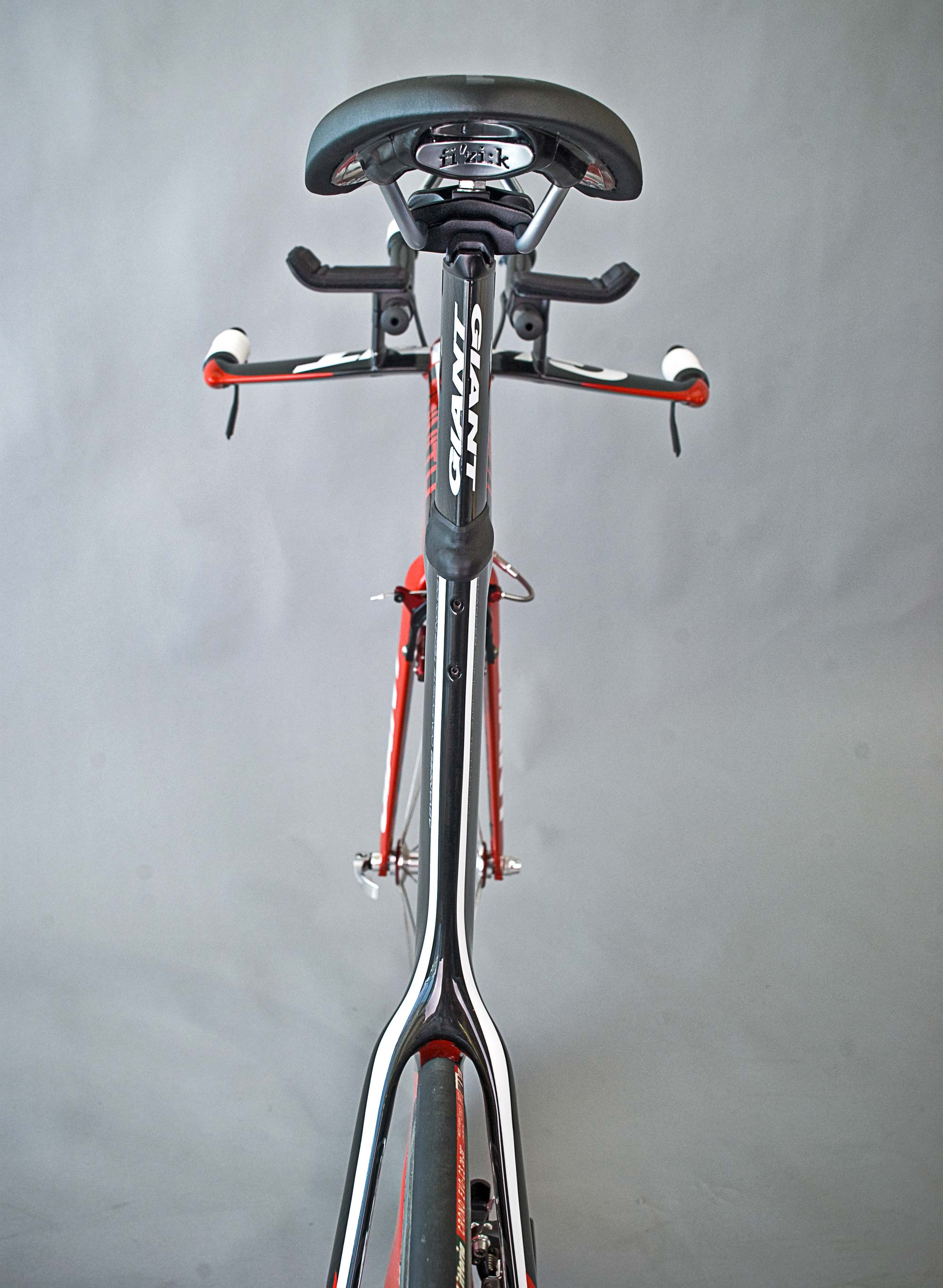 A bidon cage carrier is provided with the Trinity and mounts off the saddle rails. It can be fitted to most standard-railed saddles. This is the only place to carry water.

Giant Trinity’s are supplied with three sizing options with the “low” selected for suitable handlebar drop. The bar is held in place by four bolts: three act to secure the front cone and the final one is a failsafe in case the others come loose – the bar cannot fall out.

Owners should ensure they have a complete range of allen keys if they want to make their own adjustments. I had barely taken the front end of the bike apart and the tool wall was almost empty. Detail in using the appropriate bolts is appreciated even though a three, four, five and six millimetre key is required to remove and install the stem.

Steerer length is predetermined and gives reasoning behind the included stem heights.

Routing the cables requires more than just some lengths of standard outer.

Shifting and braking cables appear to float neatly from the handlebar extensions but it doesn’t hurt to use a specific type of outer cable that can handle multiple changes in direction.

The brakes were fitted with sections of outer cable from Nokon to better cope with the bends associated with running it through the nose cone and down tube. The gear cables had received a similar treatment to deal with the extended lengths of outer necessary for the internal system.

Extra hardware is supplied to adjust the stack height of the aerobar extensions. Shims and paired bolts are used to get the most suitable position. This is a valued area because the bike is available in three sizes. Modifications are made independent of handlebar position for isolation of each area during the fit process.

The bolts were the correct length and of considerable quality – including the addition of a stainless steel.

Giant engineered a replaceable clamp for the Vector SLR seatpost, making it near impossible to damage the frame or post by overtightening. Two vertical pieces slip inside the seat tube and press in a balanced manner and tightened with two set-screws. Its design prevents the post binding to the frame – a consideration for aero seatpost designs. 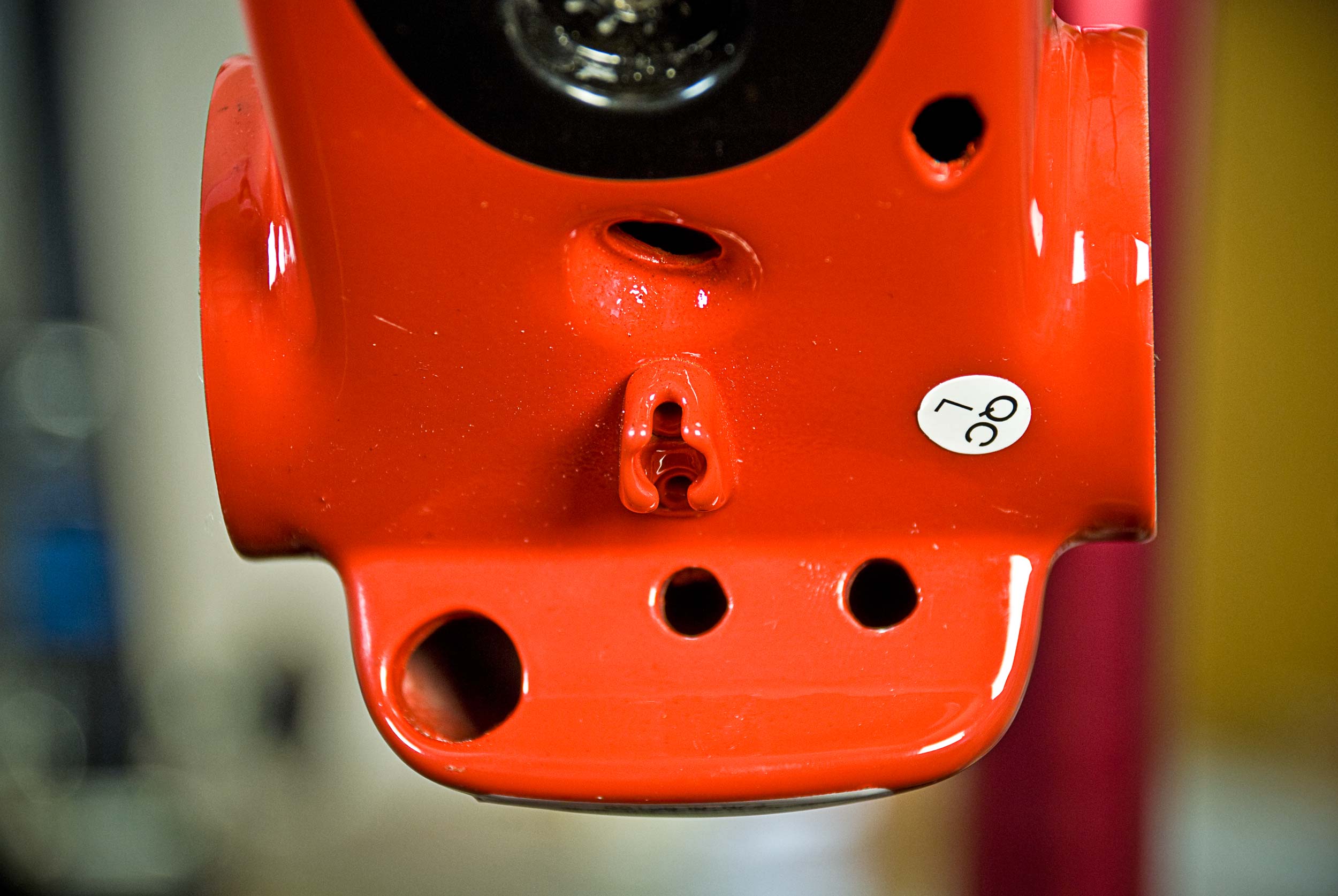 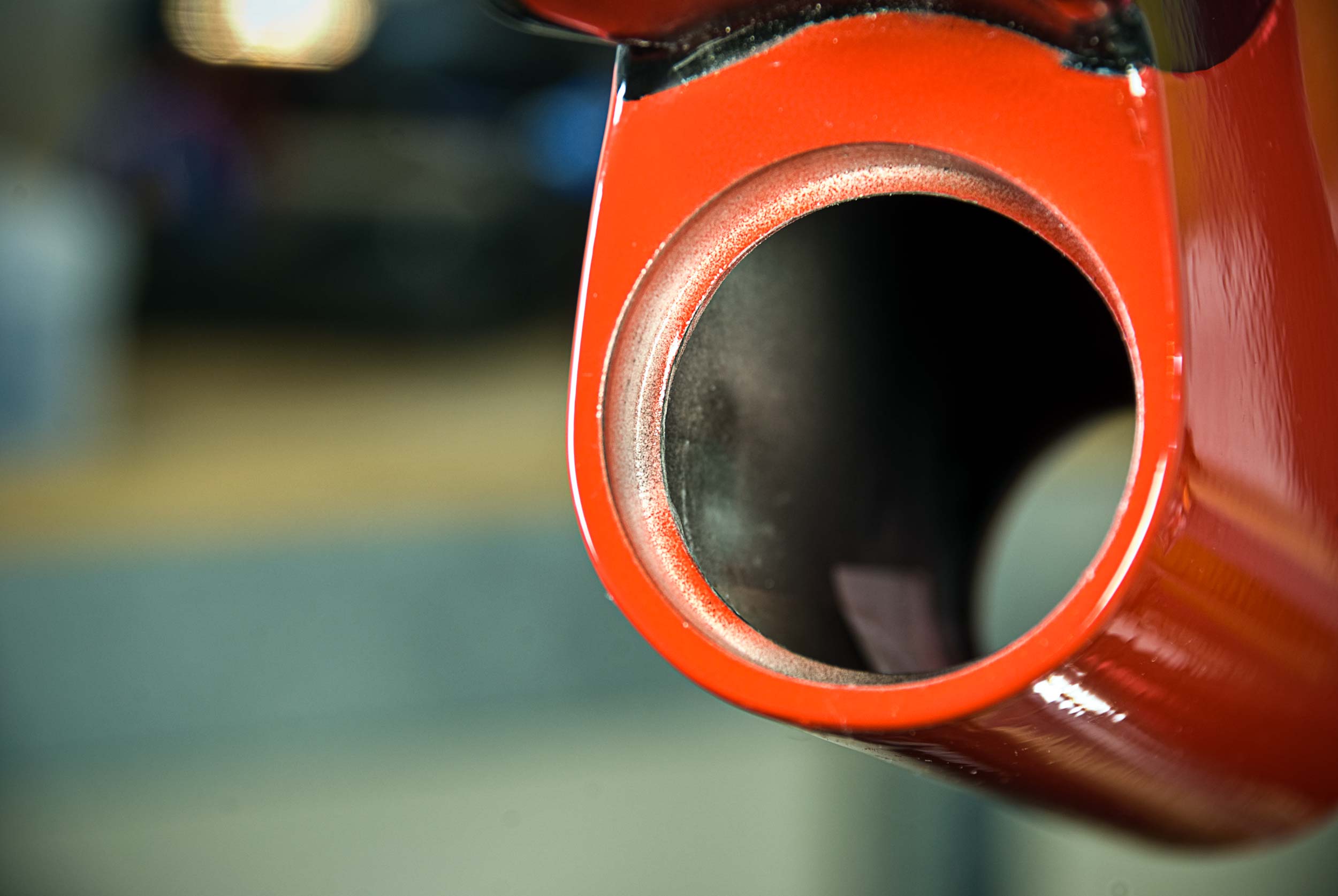 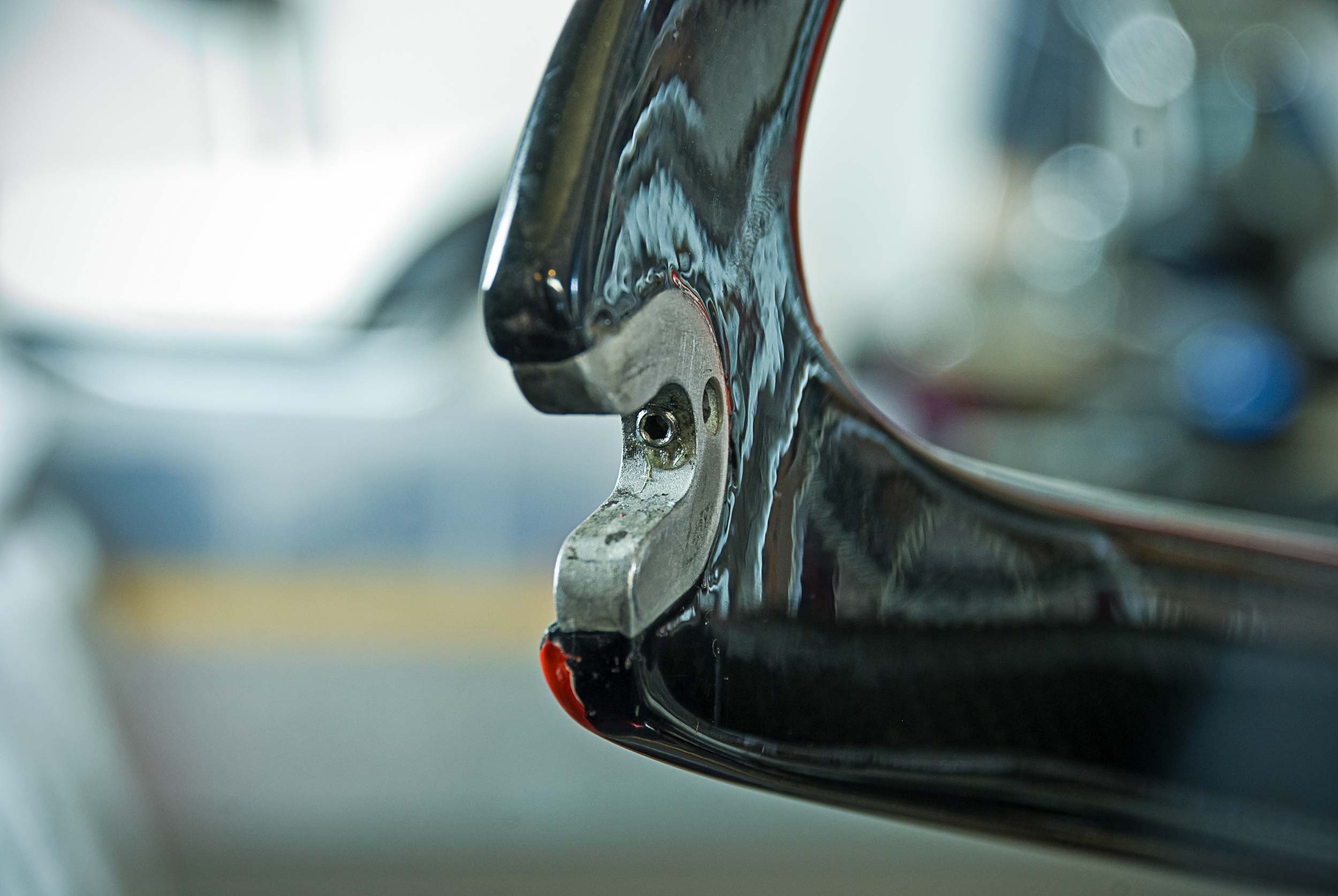