Bike Review: Cervélo Caledonia vs Focus Izalco Max – a comparison test, riding one after the other

While plenty of bikes share aesthetic traits, the handling characteristics can vary significantly. Take one bike after another for a ride on the same course on the same day and it may surprise you…

– Watch the video: Cervélo Caledonia vs Focus Izalco Max, click the link below. –

Red vs Black. At a glance you may think this experiment was about the age-old cliché. ‘Red goes faster,’ so they say. That may be the case, but does speed come courtesy of comfort or aerodynamics or component selection… or, quite simply, the placebo effect?

It can be difficult to define exactly what contributes to the ride qualities of one bike over another but if you get the chance to compare two bikes on the same course – riding one after the other with only a coffee break in between – it’s surprising how easy it is to notice difference in handling traits. I know, because this is what I did last week.

– For more on both bikes: be sure to explore RIDE Media’s YouTube channel. – 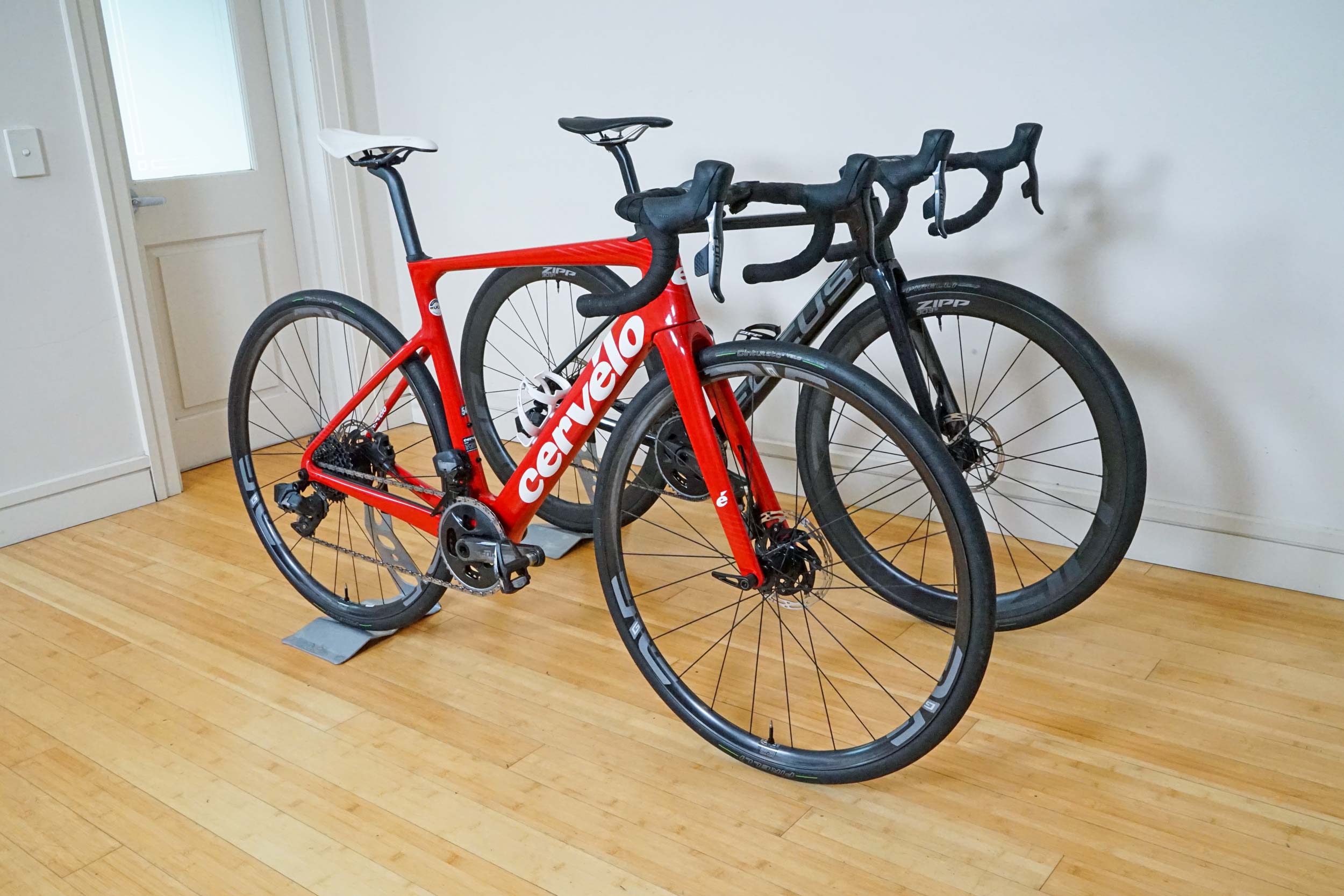 Once the basic prep is complete, put your kit on and try not to vary the outfit from one bike to the next: same helmet, shoes, knicks and jersey. Select a route that is challenging enough to get a workout but try not to go so hard that you’re tired at the halfway mark, as that could impact your post-ride judgements.

Remember, of course, that weather conditions change as the day gets older: cool becomes warm, dry can become wet, etc.

And, with all that in mind, clip into the pedals and ride. 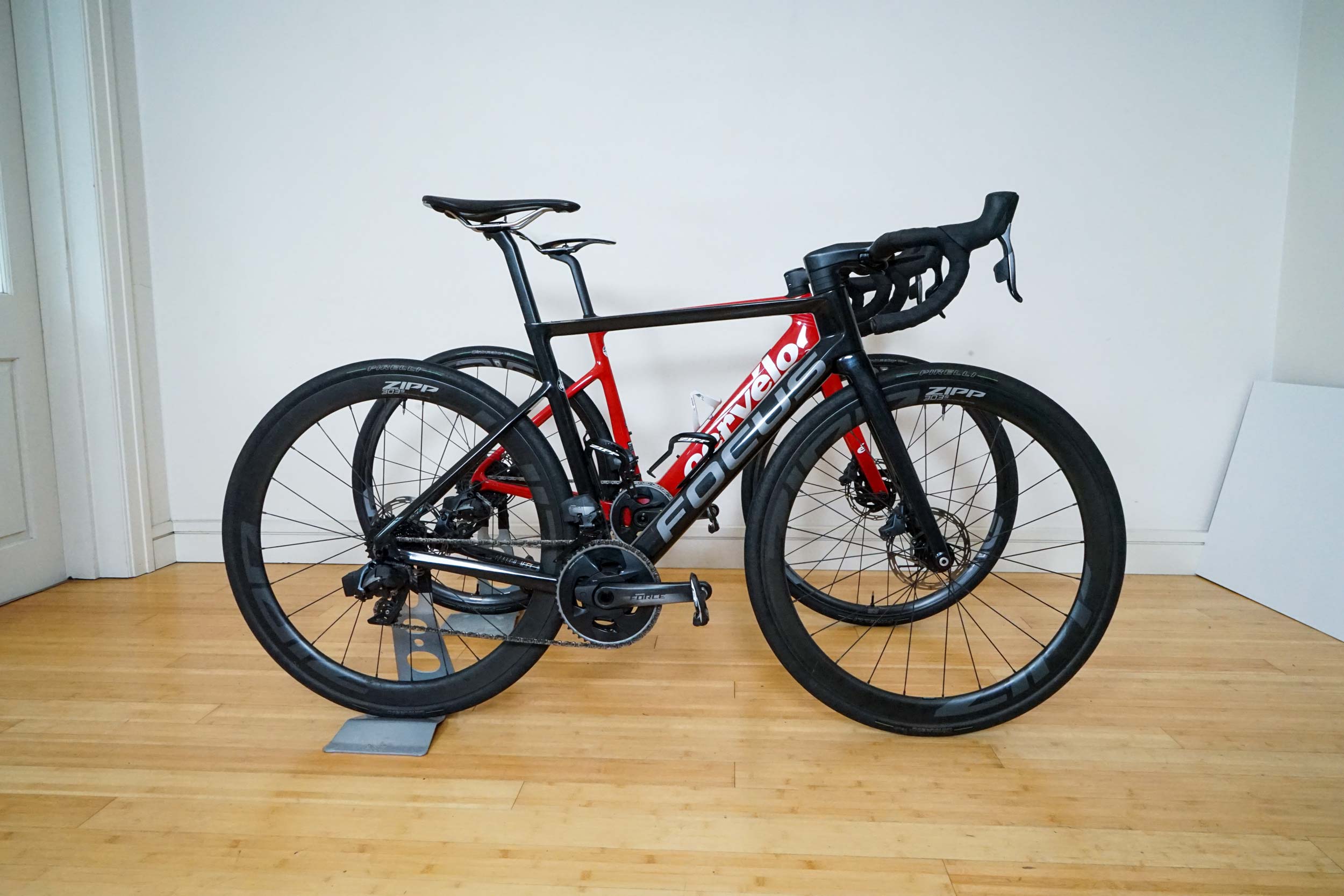 The description above is essentially what unfolded early one morning last week. With warm, humid, overcast and still conditions, it was an ideal day to test two bikes on one course. So, off I set. The Skoda was packed with two bikes and my mind free of marketing hype.

Once I was near the entry to the beautiful Ku-Ring-Gai National Park at Terrey Hills, I parked the car at Tempo Café and got my cycling kit on.

Ahead of me was the road to the gorgeous turnaround point at West Head.

I’d start with the bike I’ve become familiar with over the past five months, a Cervélo Caledonia. Once back at base, I’d make the switch and set off to repeat the out-and-back loop on My Bike, a Focus Izalco Max. 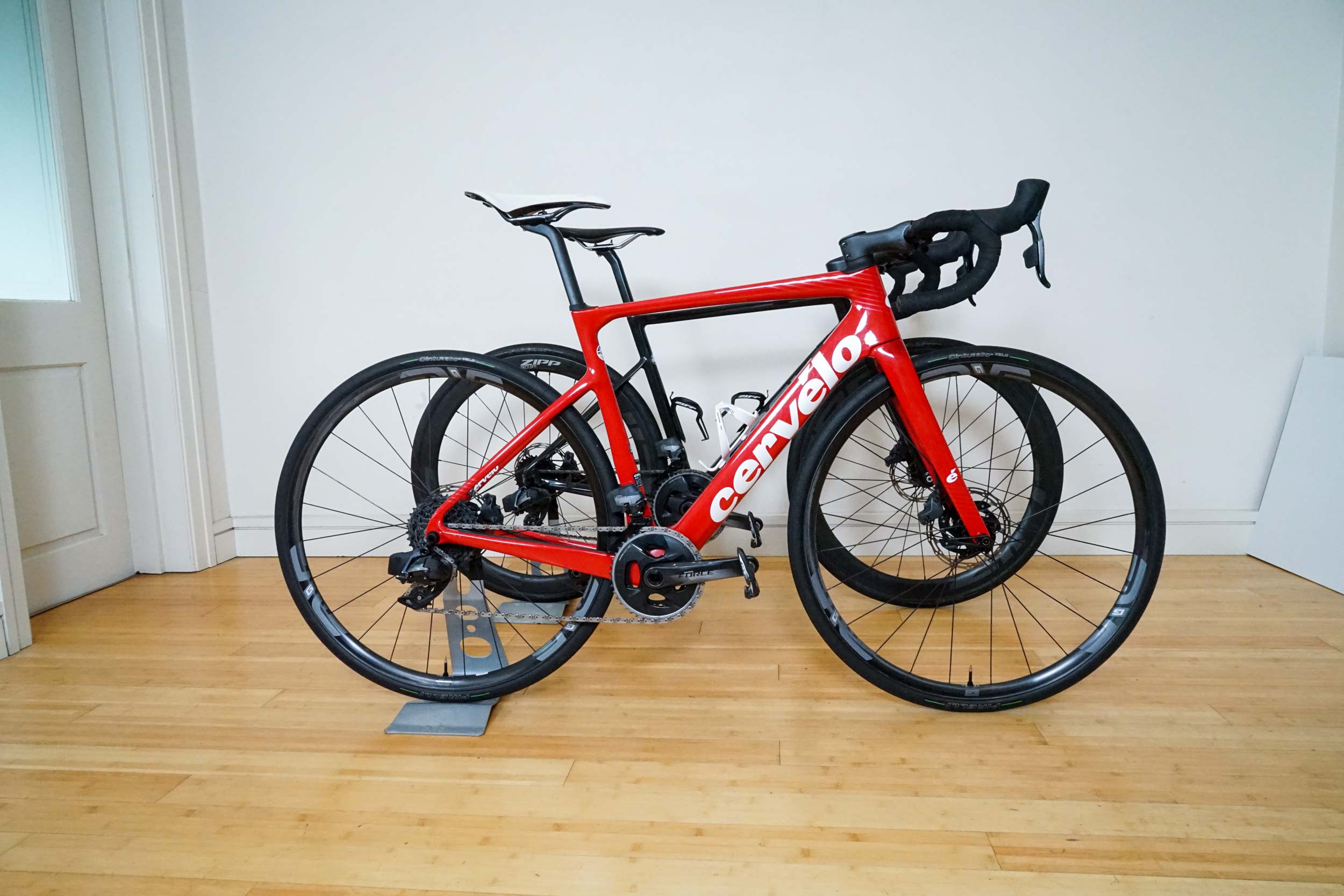 I knew roughly what to expect because I’ve spent quite a lot of time on both the Cervélo and the Focus. Both bikes have been in the office together all year. I’ve looked at them a lot and considered their similarities. I’ve also experimented with component selection on both bikes, and have come up with two bike packages that suit me and my riding requirements perfectly.

I know what the differences between the two are, but comparing them on the same roads on the same day with the same fitness level was both an interesting and enjoyable exercise.

At the end of the day, I didn’t have to decide: is one bike better than the other? And I’m pleased about that because “better” is relative.

Even if one bike is supremely faster than the other, that doesn’t necessarily make it better. Similarly, if one is more comfortable than the other… well, it just means that X is more comfy than Y (or vice-versa).

My conclusion after the ride is this: I like both bikes for different reasons… and although they look relatively similar, their ride characteristics are considerably different. 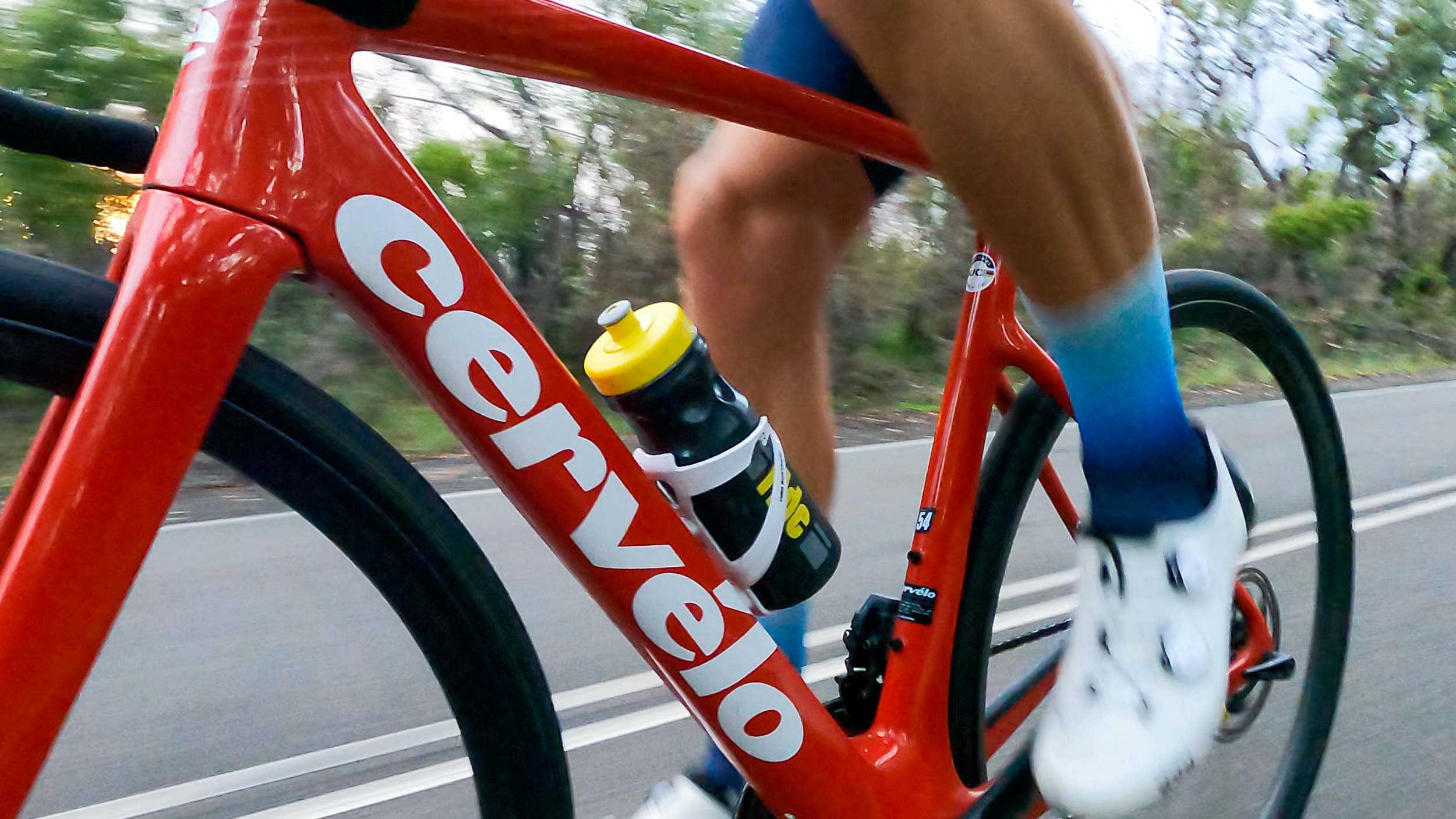 The Cervélo Caledonia offers a more predictable, controlled ride. It is smooth as silk and feels fast while also offering a more exaggerated level of comfort (ie. not transferring quite as much road shock through the saddle).

The Focus Izalco Max is quick, surprisingly quick. It also provides a higher riding position (ie. I felt taller, largely because of the slightly higher bottom bracket) and, although I’ve owned it for nearly two years, I’m still surprised at how predictable it is. 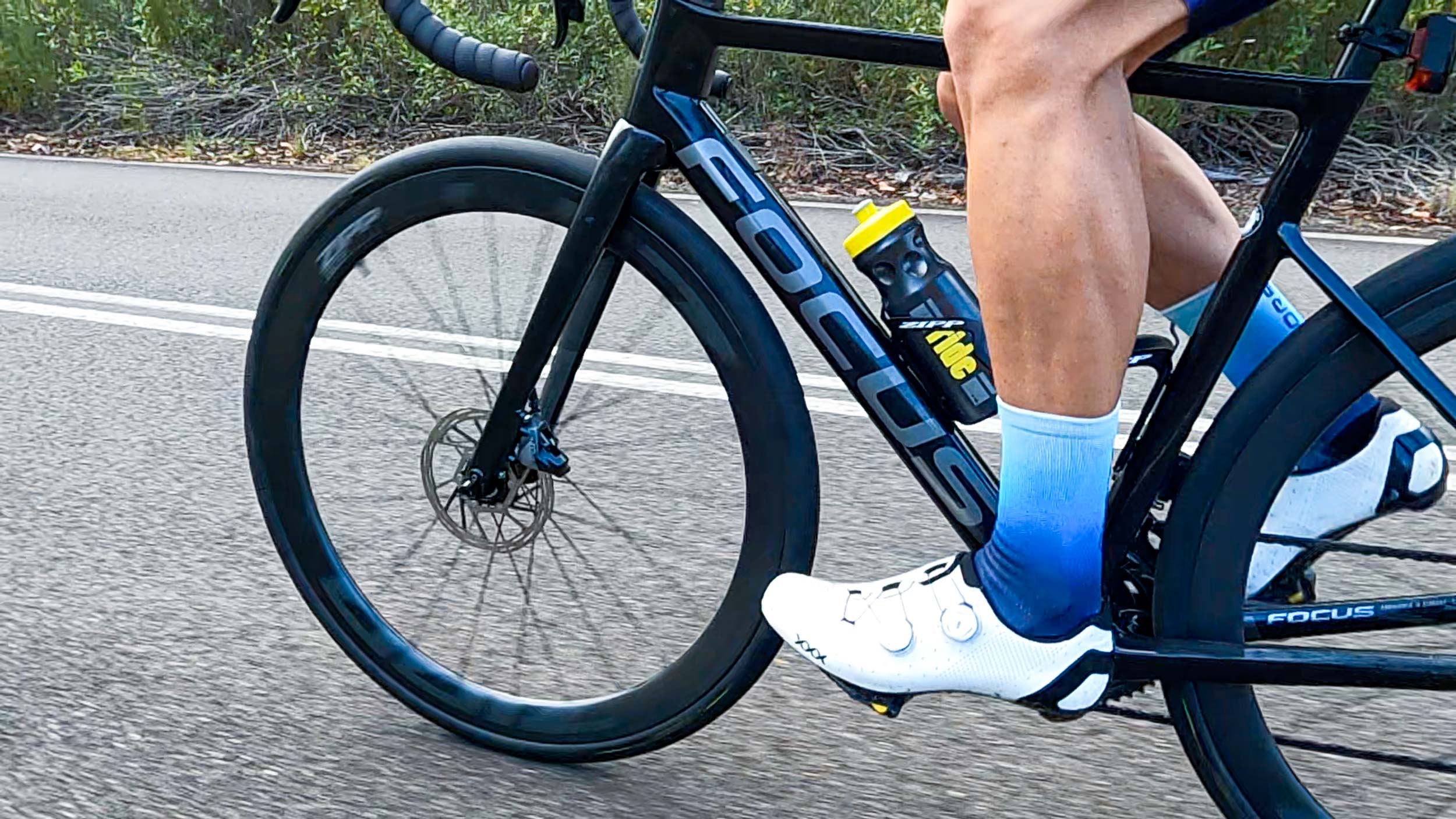 In my size (54cm for Cervélo, ‘Medium’ for Focus) the seat tube angles are both listed as 73.5° which surprises me a little because, after months of looking at the bikes side-by-side, I was convinced the Caledonia’s was steeper.

What is significantly different, however, is the length of the top tube of the Caledonia vs the Izalco Max: 543mm vs 551mm.

The considerable setback on the seatpost of the Cervélo means that I essentially found myself within a millimetre of the reach I usually ride with (on the Focus).

Meanwhile, the head tube angle is what more dramatically reflects the objectives of the designers from Cervélo and Focus: respectively, 70.5° versus 72.0°.

In other words, the Cervélo is considerably more relaxed up front than the Focus and this is particularly noticeable when going from one bike to the next. 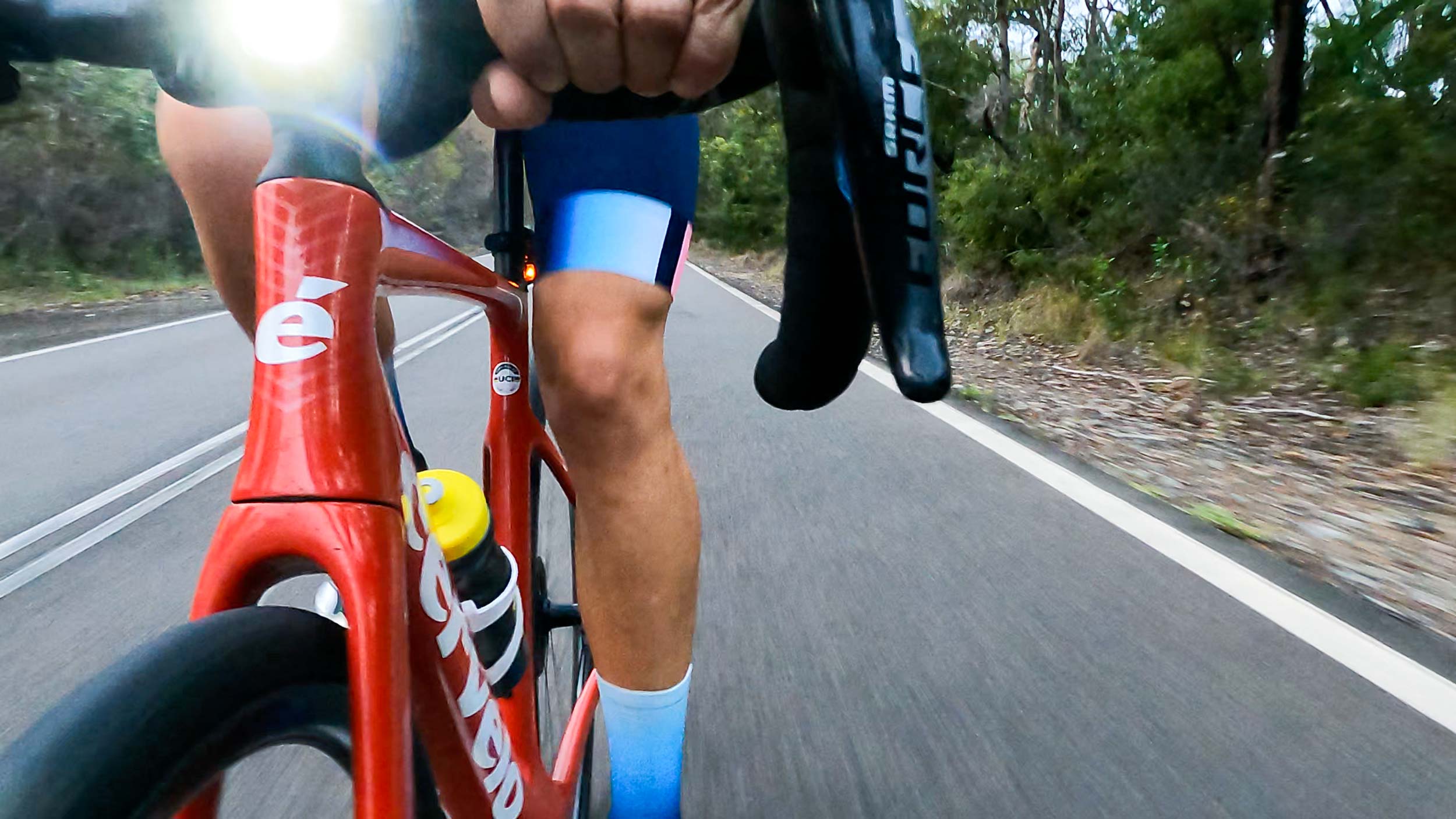 The obvious additional setback of the Cervélo’s seatpost contributes to a more compliant ride quality: quite simply, there’s more leverage and it’s noticeable when riding.

Both bikes have a similar shape seatpost profile which I’ve described in the video as being “D-shaped” (ie. the cross-section, with a capital ‘D’, of couse). And the additional leverage means that the rider tends to elicit more movement from the post to absorb road shock.

In the past, RIDE Media has used accelerometers to measure movement on test bikes but this testing protocol didn’t last long because we found there to be too many variables (mainly, the way that the rider behaved while on the bike). Still, it was a valid idea that might have worked if riding could be done in a more controlled environment. 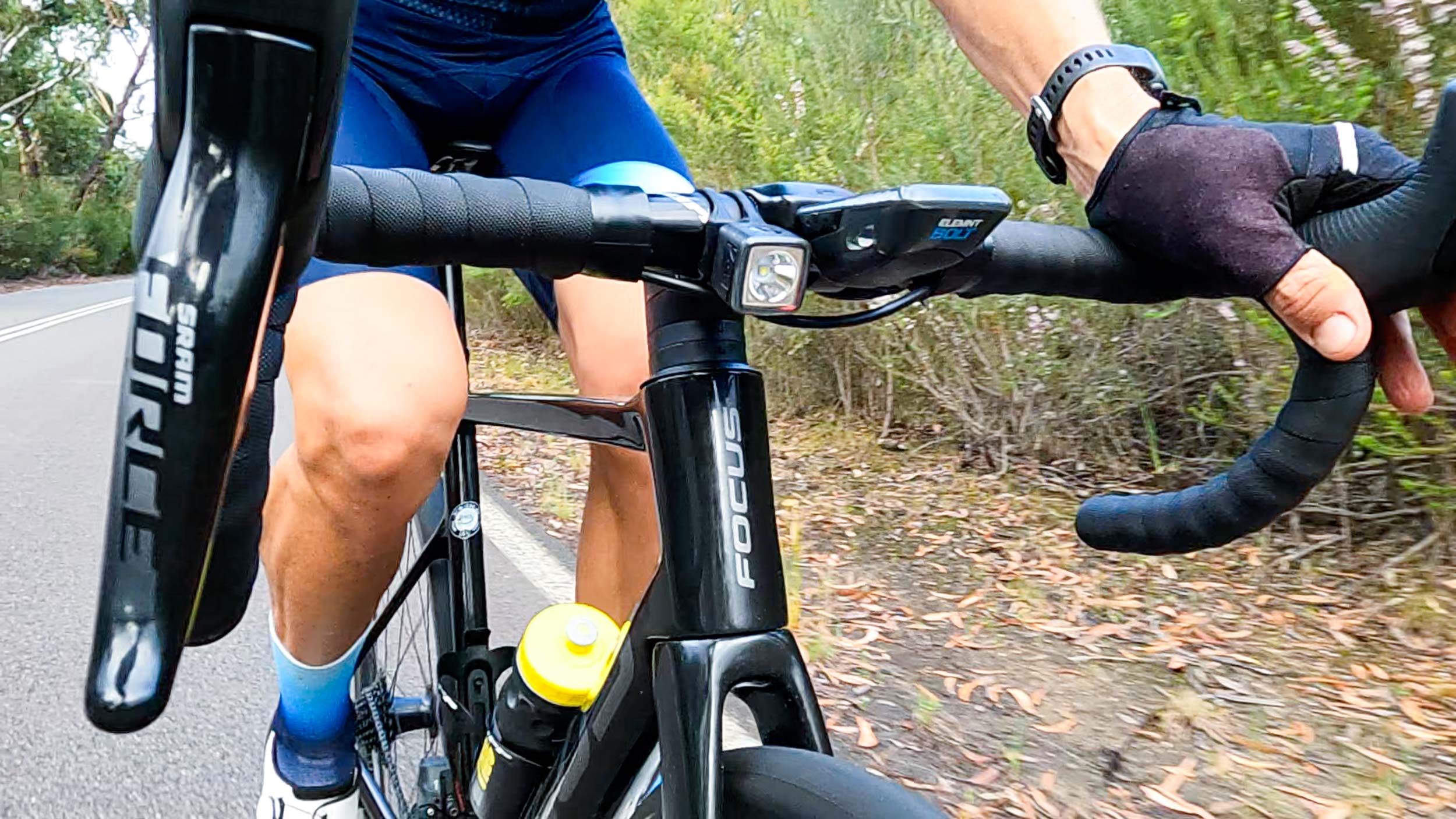 If we had measured feedback on the saddle of the Caledonia vs the Izalco Max, I’m confident to say that there would be a discernible difference because it is evident when riding. The Cervélo soaks up more vibrations and the Focus feels more direct. When riding in the saddle, it’s really quite obvious.

There are, of course, many other things at play to create this sensation. In the context of this shoot-out, the tyres (or, rather, the tyre pressure) and the wheels also contribute to the more compliant ride quality.

Both bikes have 32mm Pirelli Cinturato tyres fitted, but the wheels are different (ENVE G23 vs Zipp 303s) and so too the tyre pressure.

The Cervélo was fitted with the low-profile, wide rimmed G23 wheels with tyres inflated to 42psi; the Focus had the 303s with 52psi.

Yes, both have low pressure in the tyres, in keeping with the recommendations from the respective wheel manufacturers in relation to the tubeless arrangement that I’ve been riding all year.

And yes, the ENVE wheels have a lower profile than the Zipp wheels… which influences acceleration and maintenance of speed, as well as comfort and/or road feel.

The theory is that one wheelset is faster than the other and you can guess which is likely to be quicker but, on the road, it was difficult to tell if there was a big difference. Both wheels are fabulous (and both are expensive) and if push came to shove, I don’t know which I’d select if I had to make a choice.

There’s a lot to consider, even when comparing two bikes that I am particularly familiar with. And although much has been said about both bikes, I could keep writing about the myriad variations that I noticed during the one ride / two bikes day. Still, let’s keep this as a basic overview (while I encourage you – ever-so-subtly – to watch the associated video).

Of course, if you have any questions, don’t hesitate to send an email or leave a comment on any of RIDE’s social media pages. I’ll do my best to provide an answer.