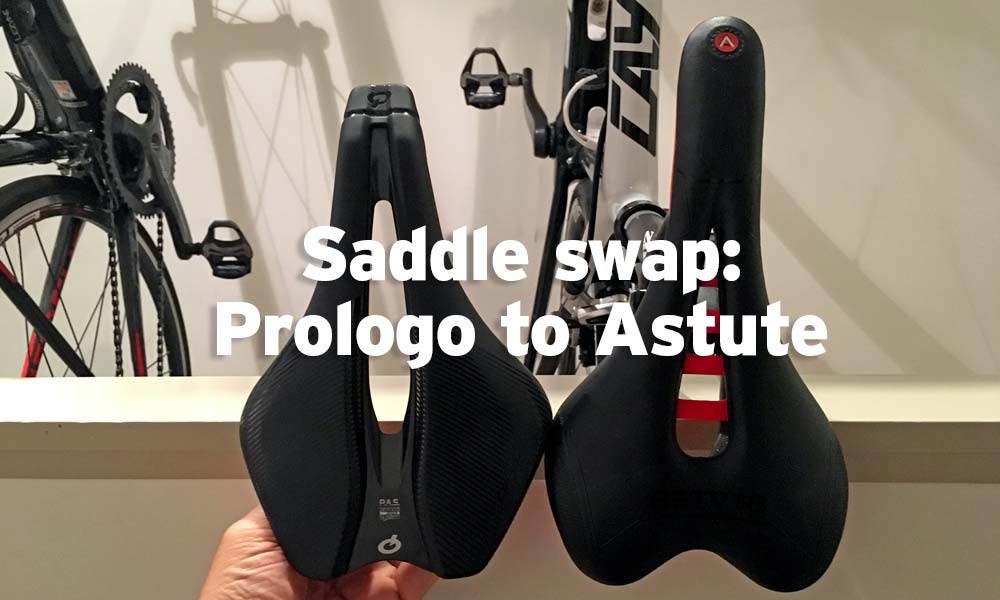 Little differences can add up to a lot. A slight change in saddle shape prompted a little compromise on pedalling action… so it was back to the usual for our test rider.

A good saddle, some say, gets better with age. There is more to the touch points of a bike than personal preference of shape alone, particularly when it comes to where you put your bum.

There is a significant change in the market and short saddles – initially devised to overcome regulations imposed by the UCI on bike set-up – have arrived en masse. The original, Specialized’s so-called ‘Power Saddle’ made its debut in 2015 but in 2018 many manufacturers have followed that example.

Prologo has a collection of ‘Dimension’ saddles that are shorter than others in the company’s catalogue and one has been selected by Cervélo to grace the top-end S5 bike packages that went on sale earlier this year.

The Prologo on our test bike is a fine product. It suits the bike, looks fantastic, is very comfortable, and is likely to wear in to provide the exact ride quality a customer desires… but that takes a little time.

When you only have a bike for a few weeks, you don’t want that time compromised; and so I made the decision to make a switch back to my well-used Astute saddle that has been on my personal bike for over a year.

– Watch the clip below for an overview of the saddle swap. –

The change has nothing to do with weight savings or even comfort as both products are on par with one another. The difference is that the padding for my personal saddle has settled after over a year of use and hours of me smoothing out the surface.

There is considerable grip on the Prologo, a special compound on the rear section ensures that you remain planted exactly where you like to be and this is something many riders appreciate – including me.

A problem is, however, that the nose of the saddle was just a tad wide for me and I found that my inner-thigh was occasionally catching on the grip of the Prologo’s nose. It didn’t necessarily “hinder” my pedalling action but it did catch the Lycra of my knicks a little and there were times when I simply had to adjust my leg, lifting it slightly wayward to avoid the tiny snag that caught my thigh.

From test bike to personal bike: the Prologo that came with the Cervélo (above) has been put to use on the ‘spare’ bike during the time of the test…

Similarly, it took a few months of use before the word ‘love’ started to be used in my appraisal of the Astute.

Yes, it was presented to me by the manufacturer a few summers ago, a special-edition – complete with RIDE Cycling Review spelled out in my company logo underneath – and it means a lot to me. It looks great, is hand-made in Italy, uses quality materials, and adds a bit of colour to an all-too-black aesthetic that is prevalent in the cycling market.

But it took a while until the Astute Sky Lite VT truly felt as thought it was mine. The leather needed to wear in, the padding had to settle, and my bum had to adjust to the shape after many years of loyalty to Fizik saddles. (The Alianté was my go-to shape for years.) 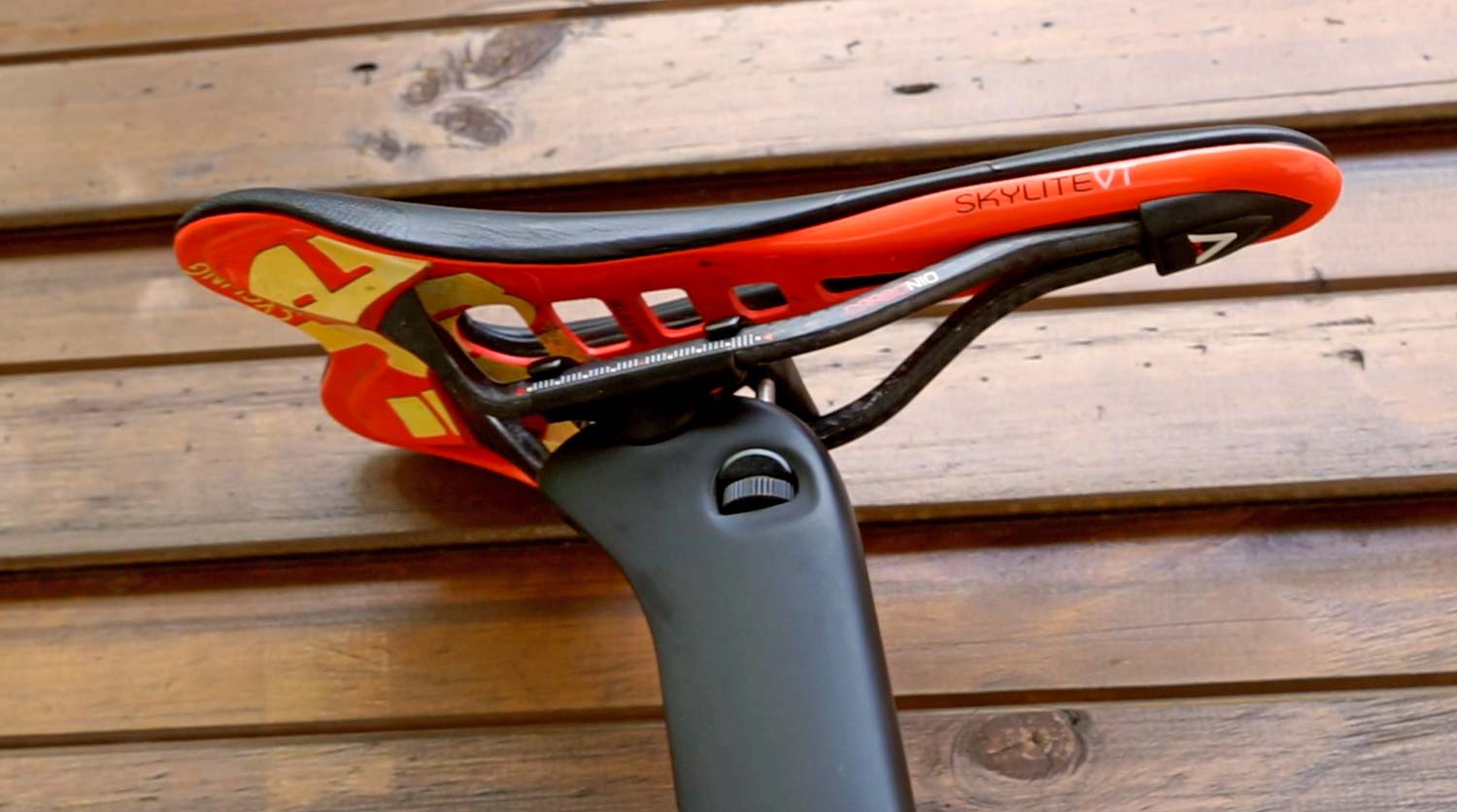 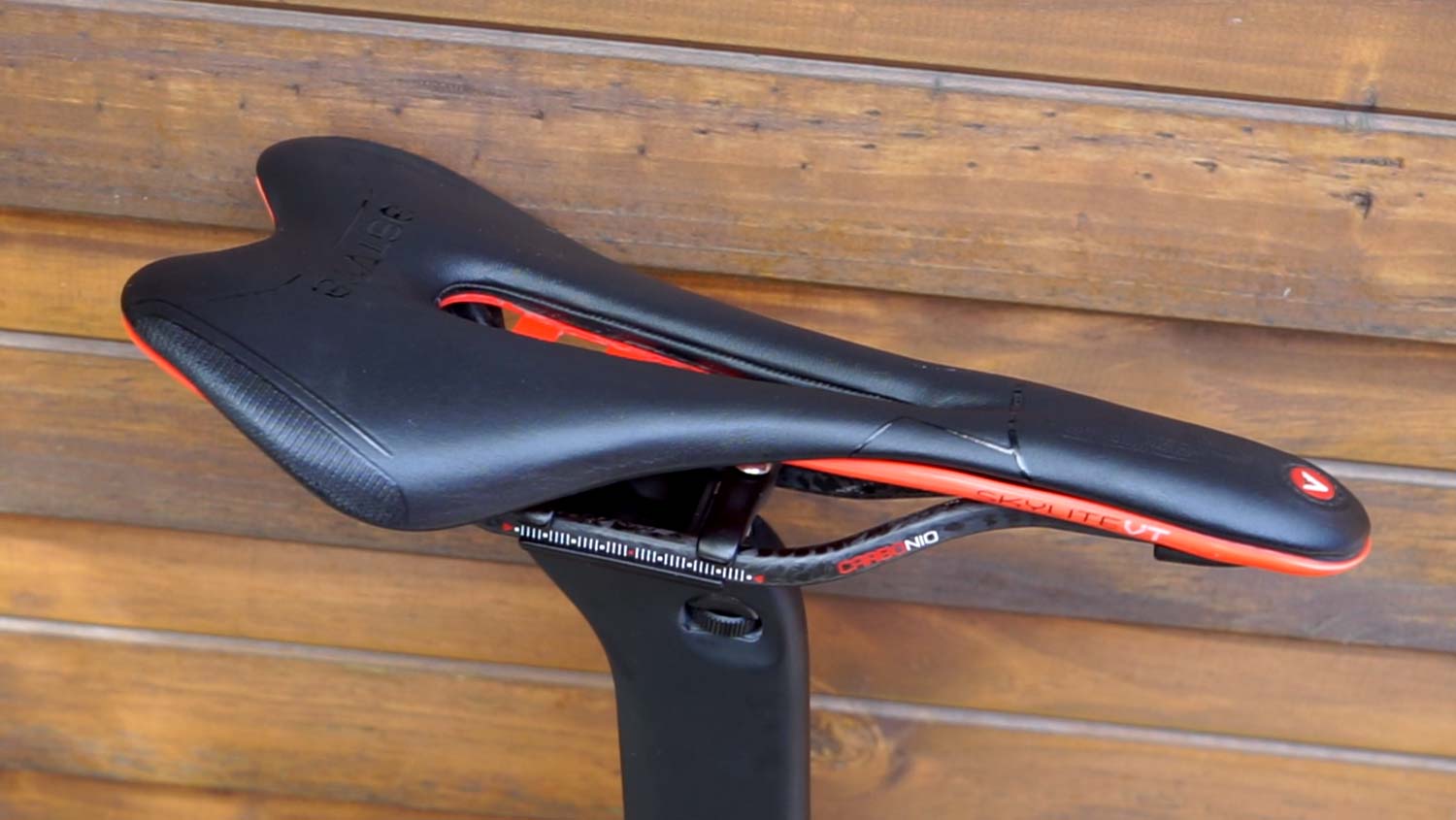 The Astute that follows me from one bike to the next… (above).

In the coming months, we are going to be asking riders what their preferred product is and saddles is high on the priority list because, frankly, it is such a personal object. Once you find the right shape, you want to stay with it.

And just because you find a good one, it doesn’t necessarily mean you’ll be a customer for life. The Alianté was good for me for a long time but then along came the orange-based Astute and the right bike to put it on… the rest, as they say, is history.

To be sure to be sure, there is absolutely nothing wrong with the Prologo that came on the Cervélo S5 test bike; but time is required to refine the surface and the padding – and time is one thing that I don’t have a lot of when it comes to this bike. When I do ride it, I want as few distractions as possible. That’s why I made the swap.