The first new bike in a year has prompted a different approach to reviews: as well as focussing on the complete package, it’s interesting to note particular elements that contribute to a great ride quality.

The Project One SLR9 which RIDE Media has to test is a stunning bike. It is light and offers great riding characteristics. At AUD$15,799, it is also very expensive.

With the new H1.5 fit, it sits in between the two previous standards from Trek (H1 and H2); and, even without cutting the forks and having 40mm of spacers (for the early review period), it put me in a good position.

The slightly higher handlebars was the most apparent difference between the review bike and my bike on my first ride. The other stand-out feature of my early riding sessions were the wheels, Bontrager Aeolus RSL 37, to be precise.

Matched with Bontrager R4 320 tyres (25mm), it’s a great combination and at around 80psi, they sing along the road and give confidence at high speed or through corners. They are clinchers and although the wheels are tubeless ready, the test bike came fitted with inner tubes and standard valves.

In my opening comments about the bike, the wheels earned a lot of attention, largely because of the contrast of handling at high speed, when compared with my personal bike (Focus Izalco Max) which is fitted with 50mm deep rims by Scope. There have been times when I have eased off, particularly on high-speed descents, because of the way the wind catches my wheels.

It’s not the dreaded ‘death wobbles’ but even a light crosswind can push them around, certainly more than what I experienced on early rides on Trek test bike. 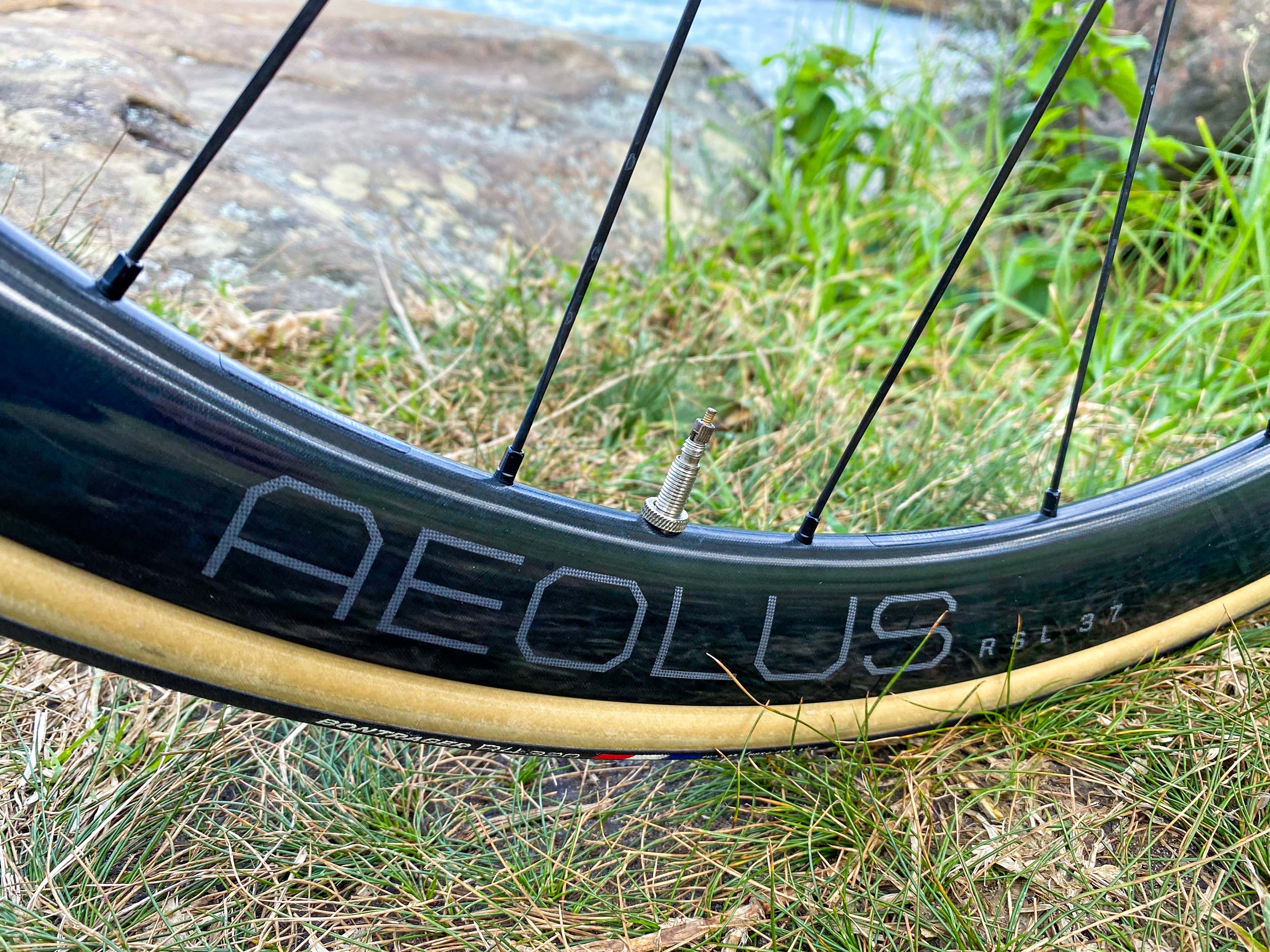 Last weekend, the review bike was loaned to someone else (at the request of Trek) and so I rode my Focus again. When the Emonda was returned on Monday, the compulsion was to switch the wheels and see what kind of difference the shallower, lighter, more expensive Aeolus RSL 37s would make.

As expected, it offers a huge improvement in ride quality, and not just on high speed descents. The weight difference is apparent within a few pedal strokes; acceleration comes easier, confirming the importance of having a lighter rotating mass.

There are benefits to the deeper, heavier wheels too, so I’m not going to simply move the Scope R5d along; with Pirelli Cinturato (26mm) tubeless tyres, they offer a sturdy road feel and there’s not quite the road feedback that I got from the Bontrager/Bontrager wheel/tyre combo. 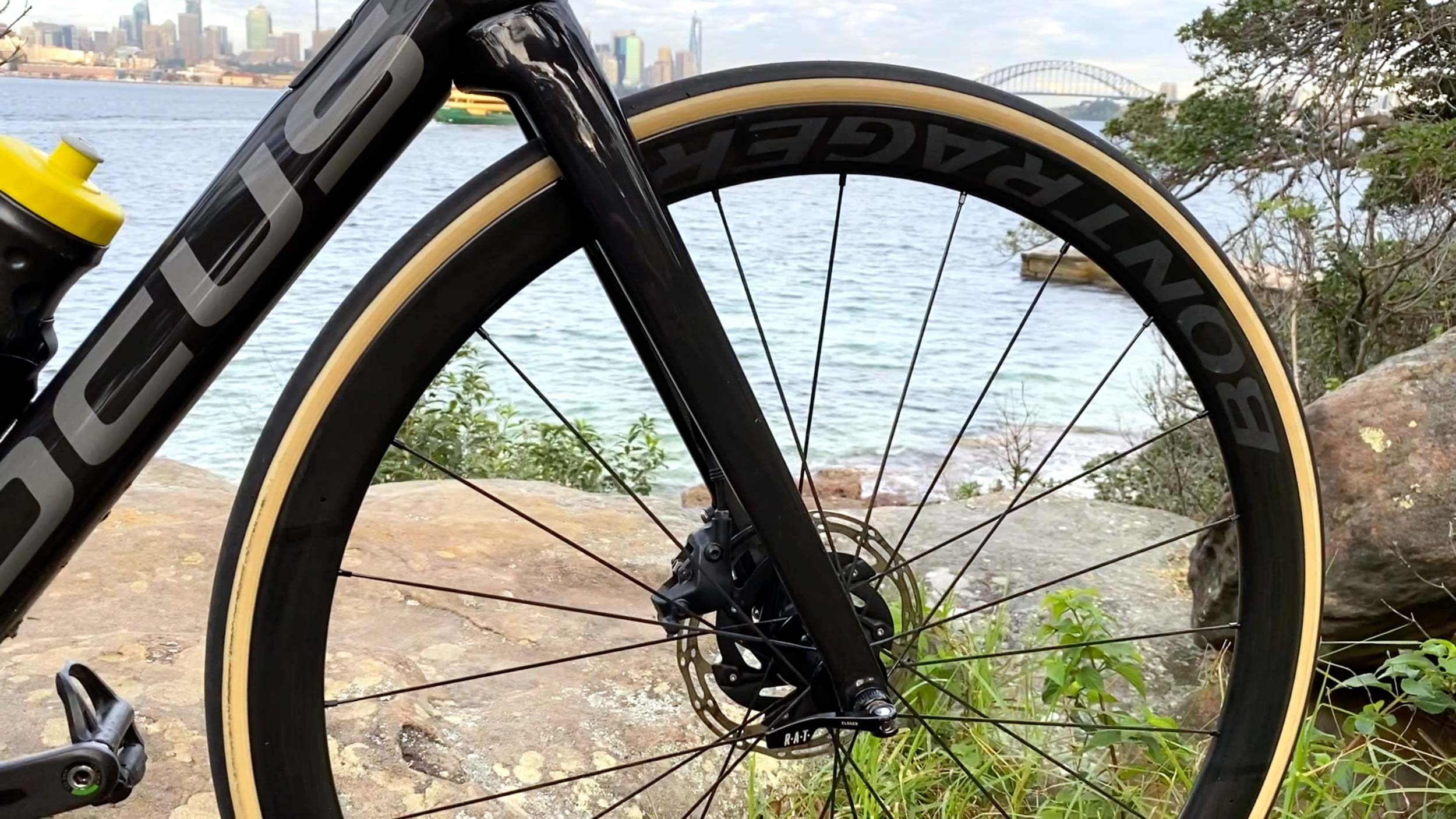 In 2020, when there are so many options for wheels and tyres (including tubular, clincher, tubes or tubeless), we are more spoiled for choice than ever before. Furthermore, the trend of bigger bag tyres adds greater diversity. (Or is that specificity?)

There are also different thru-axle arrangements, variations in rotors, and even rotor fastening systems.

In the past, RIDE Media has stripped all the parts of a bike and weighed each item individually as part of the ‘Build Report’. But for this wheel comparison, I’ve put front and rear on the scales as they are when ready to ride.

Here’s the breakdown of the various bits and pieces. 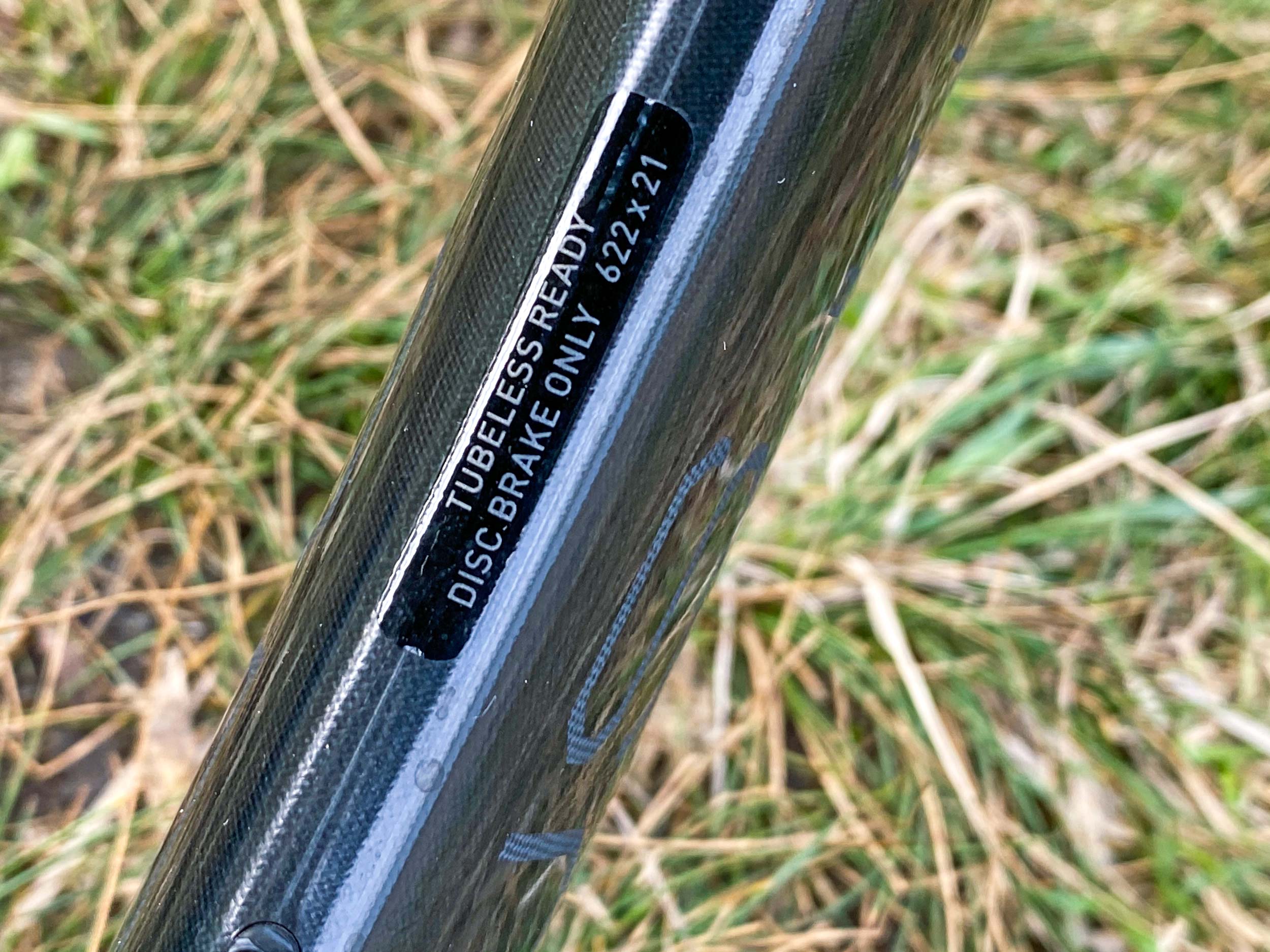 Frankly, I didn’t need to weigh the wheels to know that the Bontrager combo was lighter. It’s obvious when you ride. The difference is 341g, roughly half a water bottle… not much but it’s noticeable on the bike. Climbing is easier because there’s less weight but so too acceleration.

There are times when I appreciated the sensation of the Scope wheels more than the Bontragers – like when I was hopping over speedbumps and there’s a more surety on landing – but the lighter, more expensive wheels are, in my appraisal, better.

They change the riding characteristics, give more control at speed, and the easier acceleration is obvious. 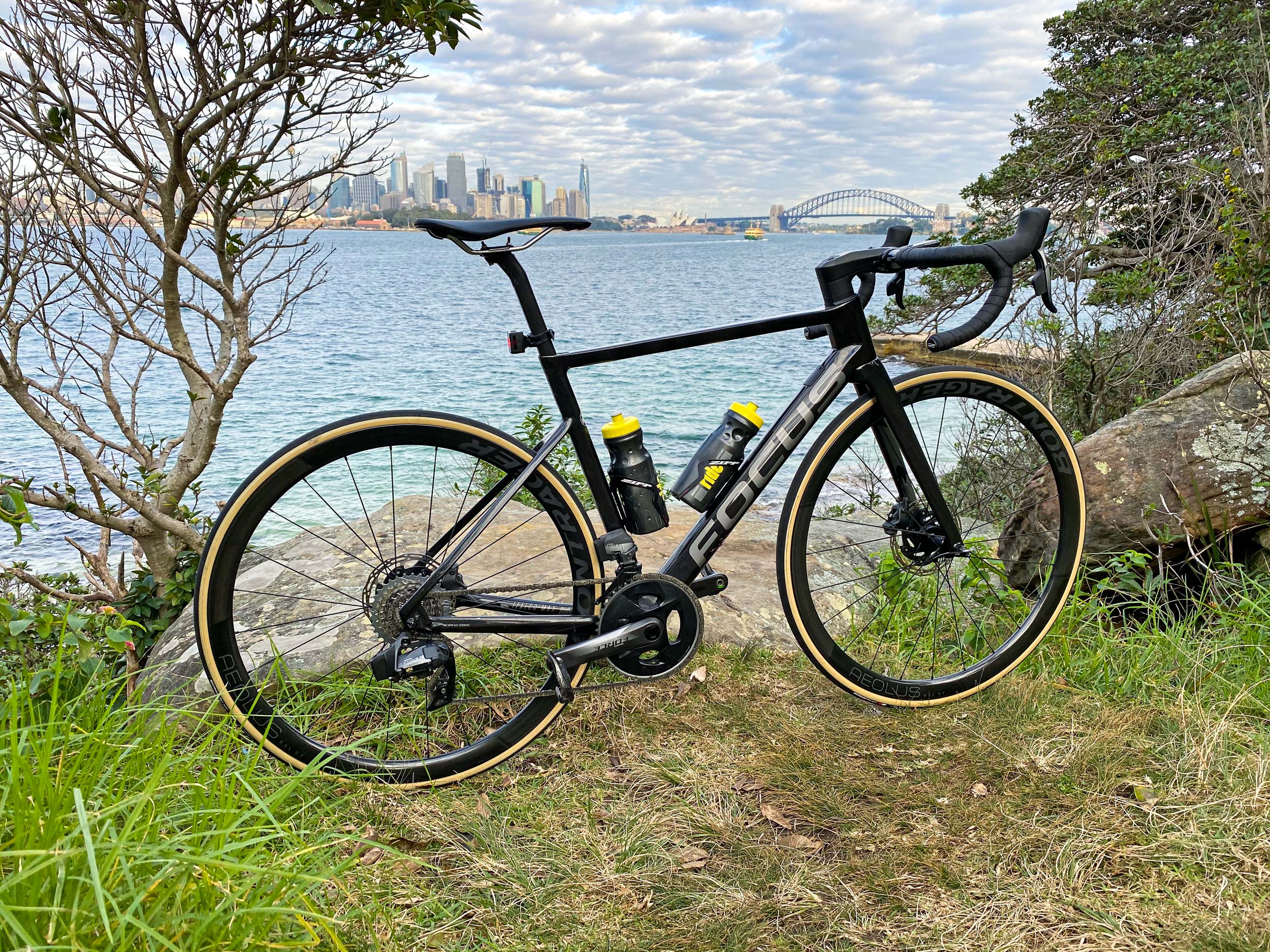 Although there’s a significant price difference (±AUD$526, depending on the exchange rate with Euros) I know which ones I’d choose if I was building a bike from scratch.

Of course, all this is subjective. Different wheels suit different people and, at 64kg, the lighter, shallower Bontrager option suits me better. Heavier riders won’t get blown around quite as much as I do, and they’re likely to appreciate the aero benefits of the deeper Scope rims.

Still, I found it an interesting exercise because the immediate impression of the Trek was that it handled better at high speed than my bike. This is true, but only to an extent as the effect of the wheels is significant.

When I returned with my Focus (fitted with the Bontrager wheels and tyres) to the site of my first test ride on the Emonda, it was difficult to make a judgement call on which was faster or more stable.

The tyres also impact the sensations (and your possible frustrations). To date, I’ve ridden the Pirelli Cinturato tubeless set-up for six months without a puncture, but the tread is now fading fast. It’ll soon be time to replace them.

I love the feel of the Bontrager R4 320 tyres. I’ve been riding them for two weeks and covered around 600km without a flat. Of course, flat tyres are often a case of dumb luck rather than a sign of the fragility of the product but I’m guessing that the Bontragers would wear much faster than the Pirelli tyres.

The price variation isn’t as significant as I’d expected: AUD$110 for each Bontrager tyre, versus AUD$100 for each Pirelli. But again, weight is a factor. One R4 320 weighs 230g (and requires an inner tube); while one Cinturato weighs 290 and needs the tubeless-ready valve and about 60ml of goop inside the tyre.

In the review video, you see my reactions to the first ride on my bike with the Bontrager wheels and tyres. It’s obvious what I think is better. The lighter, more expensive wheels impress me enormously, as I expected they would.

But I’m not done yet with the experimentation. Now it’s time to start meddling with tyres sizes and see how this impacts the ride traits of the Trek Emonda. I’ve got the test bike for a few more weeks and I’m curious to note how a few little changes can make big differences.