Caleb Ewan, 1st in Poitiers: a close sprint for the win in stage 11

The photo finish for stage 11 explains a lot: four fast men reached the finish almost as one… but it was the desperate throw right on the line by Caleb Ewan that earned him another victory in the Tour de France. 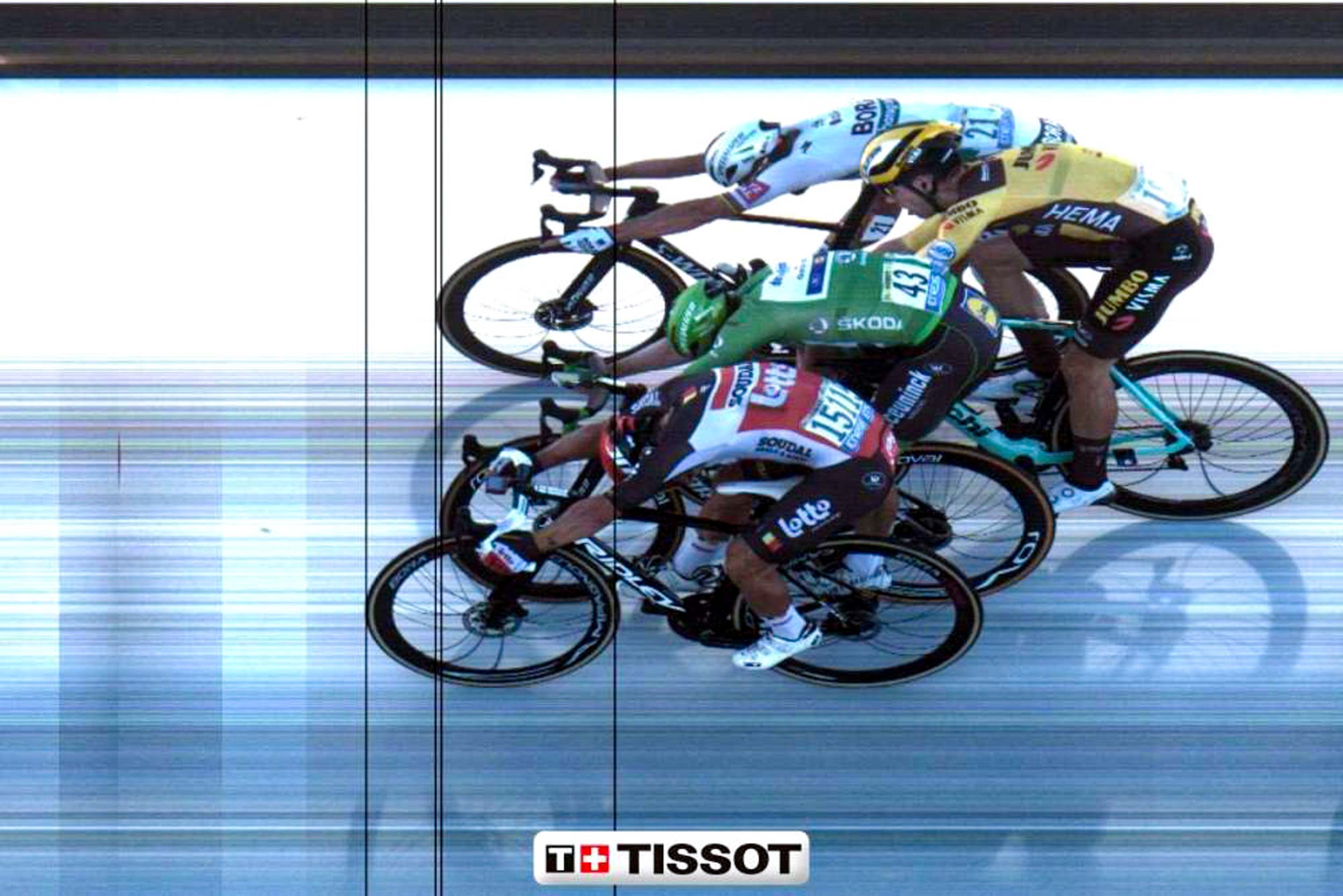 Four of the best: Ewan ahead of Sagan, Bennett and van Aert. That was the order across the line but the results are different after the relegation of Sagan to 85th for dangerous riding.

A handful of centimetres can be the difference between elation and frustration. Speed isn’t the only thing a sprinter needs to take a win in a race like the Tour de France. There are plenty of quick men in the peloton but four of them arrived at the line in Poitiers, all with a whiff of victory.

Ultimately, it was Caleb Ewan ahead of Peter Sagan, Sam Bennett and Wout van Aert who were separated by less than the length of a bike. Still, the official result shows a different story. The Australian was indeed first in stage 11, but the Slovakian who crossed the finish line second appears down in 85th on the results list.

Before we consider Sagan’s relegation for dangerous riding, let’s consider the stunning win by Ewan. It was artful sprinting by a rider who has won five of the 32 Tour de France stages he’s contested. 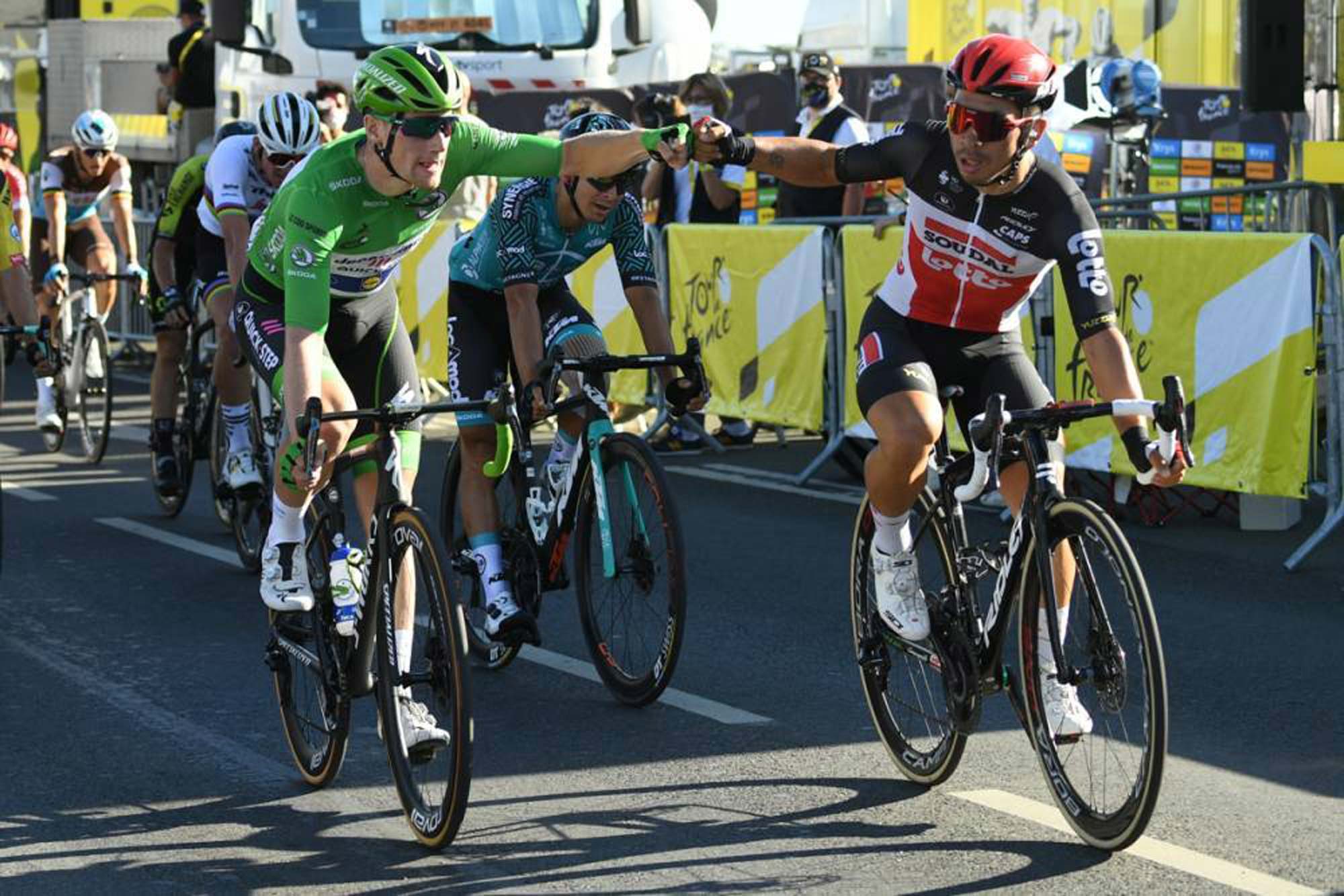 “My closest opponent, Sam Bennett, is one of my best friends,” said Ewan in Poitiers about the Irishman in the green jersey who is officially recognised as the runner-up in stage 11.

“It is always business when it comes down to sprinting. But we are happy for each other when we win. I was very happy for him yesterday getting his first win. You saw how much it meant for him and I know how hard he worked for it.”

Bennett beat Ewan in the sprint on Île de Ré to win stage 10 and the order was reversed a day later in Poitiers. Both times there were only centimetres between first and second.

“I did a big throw on the line and didn’t know if I won,” Ewan said after his victory was confirmed in the photo finish. “I had a real desire to win today. After yesterday I was disappointed, and I am so happy to repay my team-mates with the win.” 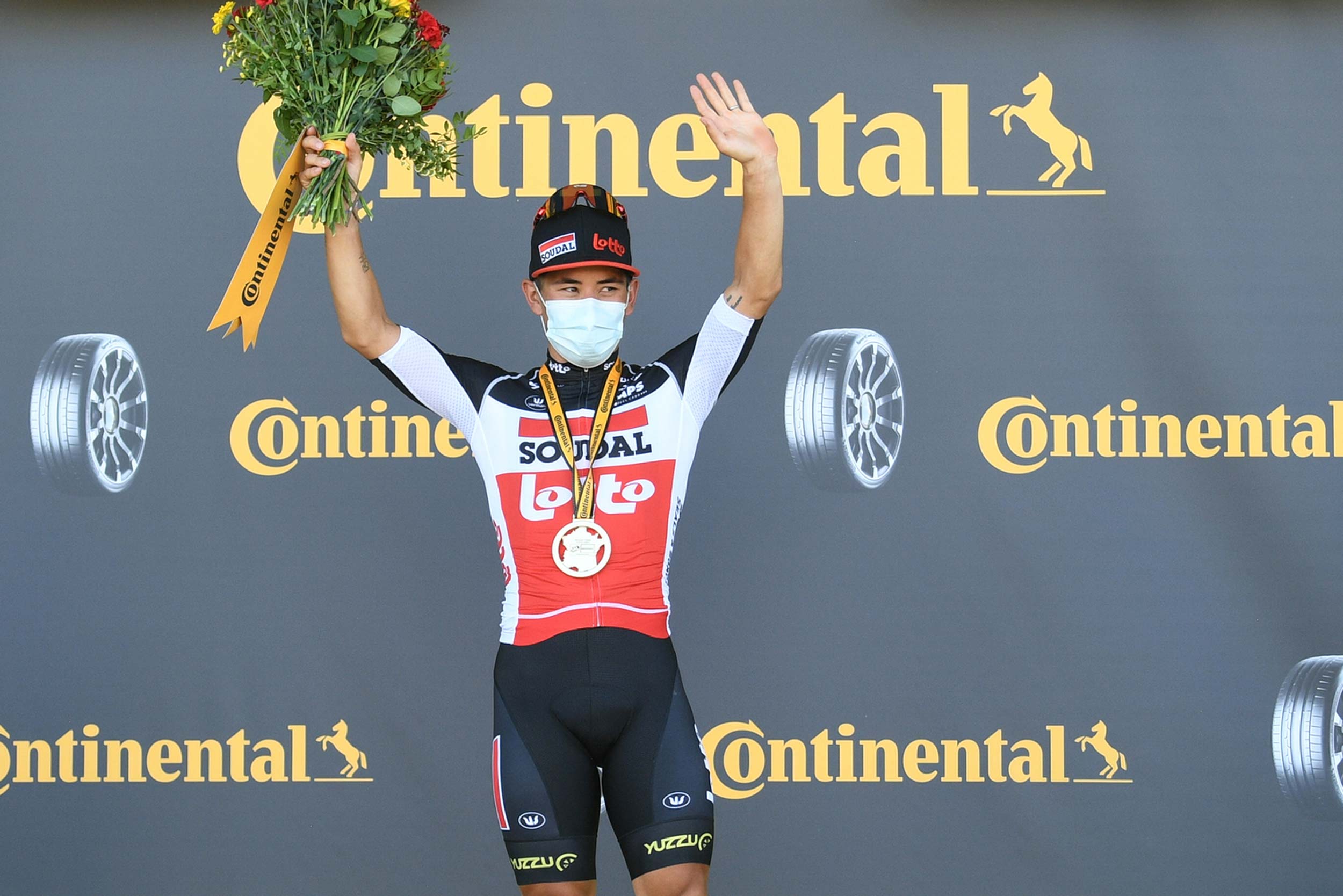 Sagan, meanwhile, remains winless in 2020 and his quest for a record eighth green jersey took a big blow in Poitiers when he was shunted down the rankings because of a dangerous sprint. Instead of being the runner-up, he was dropped to last place in the bunch of 85 that arrived at the finish together.

The upshot is that the two good friends, Ewan and Bennett, earned the sprinters’ spoils in stage 11: a second victory for the Aussie in his second Tour, and a healthy acquisition of points for the Irishman who wears the green jersey with a tally of 243 points – well clear of the next-best, Sagan (with 175).

“It was such a crazy finish,” Ewan explained. “I was in the front with 1.5km to go and dropped back because of the headwind. After my first stage win, I knew I had to keep calm and wait for the right time and the gap to open. That happened quite late…”

Indeed, with 500m to go, it seemed that Ewan was out of contention. Boxed in, well back, and with a cluster of first-class sprinters ahead, winning seemed impossible. But Ewan is a sprinting magician, a rider with speed and determination who seems capable of opening holes that don’t exist and weaving his way into the lead when it matters most.

While Sagan battled with van Aert on the right-hand side of the road, Ewan looked for solutions – for spaces, for opportunities to pass… and not only did he find the openings he needed, he also had the power to slot his way through to the front of the bunch at exactly the right moment.

Ewan doesn’t have the lead-out support that Bennett enjoys. Lotto-Soudal is down to just five riders but they know they have a reliable sprinter who can still earn big results so Roger Kluge and Jasper De Buyst battled hard to deliver Ewan to the final kilometre in the best possible position.

“I am super happy with my two stage wins,” said Ewan. “One just takes the pressure off. Then, after the first one, you always want a second.”

After the second…? Yes, he wants a third. That’s how it was in 2019 and this year, even on a route without many options for sprinters, he is on course for a triple.

On debut last year, he was there or thereabouts for the opening stanza, earning 3rd place in stage one followed by three more top-3 positions in the first 10 stages. Then came the maiden triumph at Le Tour for the Lotto-Soudal sprinter; in Toulouse he achieved his goal… but there was more to come.

Even though he had never finished any of the four Grand Tours he’d done before, Ewan was determined to make a difference in his first Tour. In 2019, he won stages 11 and 16 and then noted that it was indeed his longest stint in a three-week race but he wasn’t finished with last July – he wanted another win and that’s exactly what he got at the finish of his first Tour de France.

Victory in Paris is how Ewan signed off on the race last year, and he’s already talking about a repeat in 2020.

“Now I for sure want a third victory, especially in Paris with the Champs-Élysées. So, I hope to get through the mountains and get another chance in Paris.”