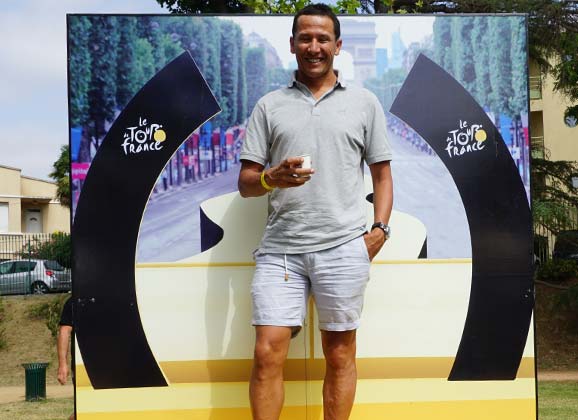 Chris McCormack at the Tour

We step away from our usual programming and, instead of talking to a cyclist we catch up with an athlete from another sport. Chris McCormack rides a bike, sure, but for years his job also included swimming and running. The two-time Kona Ironman champion is at the Tour de France and getting a taste of his other sporting love.

RIDE caught up with the 42-year-old to find out why he’s in France, what he’s doing at the Tour and what he had to say when he had a chance meeting with Lance Armstrong in the rental car queue upon arrival in Toulouse…

It was only a few years ago that the Texan had plans to contest the triathlon in Hawaii. He talked himself up and, in the process of doing so, he raised the ire of the boy from ‘The Shire’.

“I said, ‘I’ll race ya mate’,” McCormack explained to Triathlete in December 2013 about a challenge to compete against the Texan in a one-on-one  race on the island of Kona. Never mind the fact that Armstrong was banned from competition, McCormack wanted to prove a point.

“I don’t even care if there are no accolades… I just want to race you,” he said about the challenge, “just two old blokes. No excuses… Lance has done some horrible things and some amazing things athletically, but he’s still a competitor and I’ve always been inspired by racing competitors. He’s a prickly personality and I’d love to go around and have a crack at him.”

That’s some background to a competition that never eventuated but the pair met again only a couple of days ago; both are brash, outspoken and confident in their abilities but, during their chance encounter, they just exchanged pleasantries, collected their respective cars and drove off in different directions.

Below is a transcript of the discussion with McCormack from this morning in Muret. 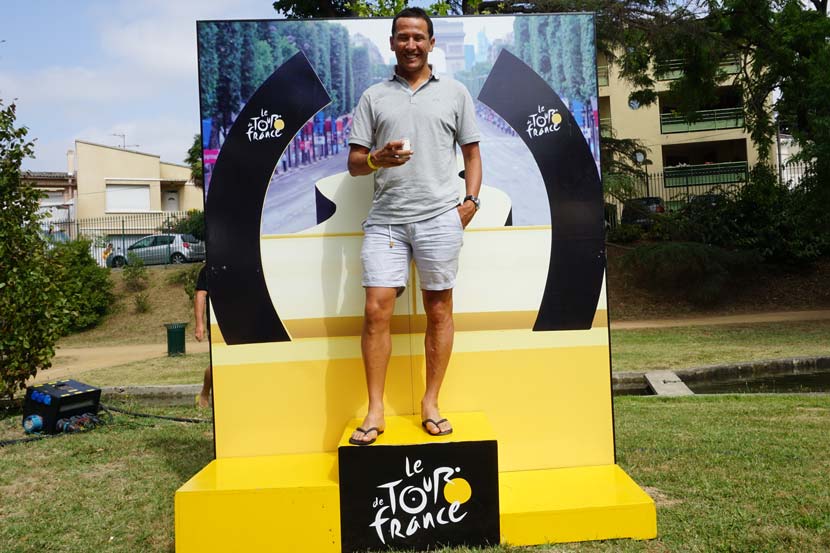 A triathlete on the podium of the Tour… McCormack at the ‘Ville Départ’ for stage 13 in Muret.
Photo: Rob Arnold

RIDE: I’ve just bumped into Chris McCormack of all people. He’s just wandering around having a look at the Tour because he’s always been a cycling fan. What are your impressions…?

Chris McCormack: “I was here yesterday as an invitee of the BMC team so I got to sit in the car for the first time in my life. They’re having a great Tour de France so to see the logistics behind the scenes of a massive team was awesome.

“Today is my last day with the guys from BMC and it’s been fantastic. If you haven’t been to the Tour de France, it’s well worth it – it’s definitely a ‘Bucket List’ thing and it amazes me. There’s a spectacular ambiance here in France.”

We caught up many years ago – before you’d won any Hawaii Ironman titles – and even back then you were referencing Max Testa and some of the things that he was doing with testing cyclists. And here you are, hanging out with the team he now works for…

“Totally. Max is on the BMC team and we were just talking about him this morning and catching up with him.

“The one thing you can’t hide is that you’re always going to get old but it’s great what sport brings you; some great friendships and you see guys navigating their way through different sports and endurance racing in any capacity is really, really cool. Catching up with Max and the team from BMC, and looking at these amazing young talents has been interesting.

“The Aussies are all over this team with Rohan Dennis and Cadel enjoying success and it’s really cool to see where Australian cycling has come and to have so many friends who are still hanging around.”

Does that mean that there’s a commercial accord coming together with BMC and Chris McCormack?

“Uhm, I’ve just got many friends in the company and I think what they’re doing is incredible. I still ride a Specialized bike – when I am riding…

“I haven’t been home to Australia for many years but I’m still a proud Aussie and I think when you look at BMC and their association with Australia, it’s clear that there’s a strong link. I see many of my friends racing with this team so I’ve come across to support what they’re doing.

“I had the opportunity to catch up with Rohan Dennis yesterday; I’m a big fan of this kid. I don’t know him but I’m a huge fan; I watched him at the Tour Down Under and followed him with the world hour record and, like everyone, watched the first stage of this year’s Tour… and he’s an enormous talent.

“It’s also great to hear an Aussie accent when you’re in Europe.

“I’m just hanging out and having a good time.” 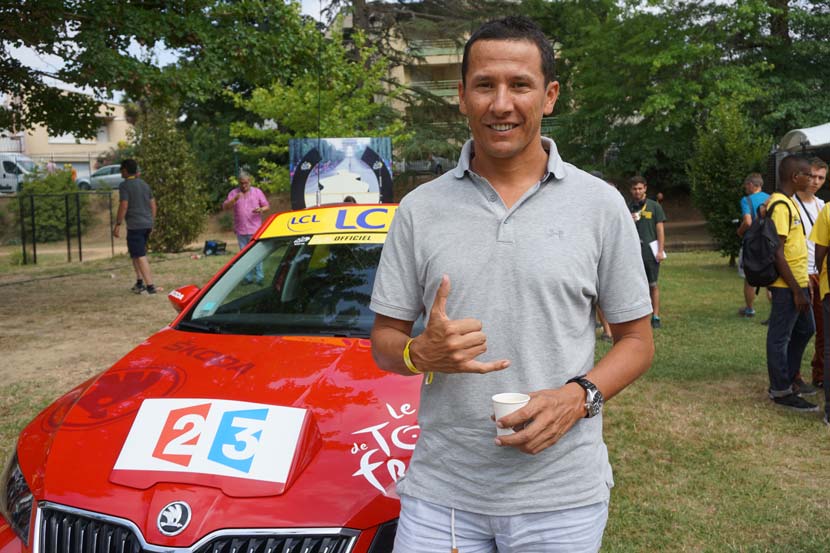 Chris McCormack now lives in Thailand, and “I’m often in Bahrain”… but he still has the traits of a quintessential Aussie.
Photo: Rob Arnold

A couple of years ago there were some – what will we call them? – ‘verbal stouches’ with a certain Texan. He was planning on doing an Ironman. What do you say you were going to with him?

“I actually bumped into Lance at the airport, believe it or not, when I flew into Toulouse. I said hello. He’s in for the Tour this year and I said, ‘Oh, hey – how you goin’ mate?’

“We’ve always had our differences, Lance and I.

“He came across to my sport and then everything went sour for him.

“Triathlon has always been a great feeder.

“Professional cycling, within endurance racing, is the top of the tree of professionalism and I think anyone with any endurance talent would love to be riding the Tour de France, so we’re always drawn to this event – even as a triathlete I’ve always been fascinated with this race.

“My issues with Lance came from the fact that, when he looked back at my sport, he didn’t look at it fondly – as a launching pad for a further sporting career.

“He dissed a lot of the champions so when I threw out a challenge to him and said, ‘I’ll kick your arse’, he never took it up which is typical Lance – he picks his fights – and that’s where it ended.”

What did you have to say to him in Toulouse?

“I just said, ‘Hello, how are you?’ He was standing next to me in the rental car line. He was just another tourist, I guess, and I was quite shocked.

“I knew what he was here for and it was just a bit of small chit-chat and off he went.

“We’ve always had our words when we’ve seen each other.”

You can take the boy out of The Shire but you can’t really take The Shire out of the boy. There are still a lot of Australian traits in your manner.

“Absolutely. I always contact my mates at home going, ‘You wouldn’t believe where I am…!’ I’m still a geek for all of it.

“Sometimes I pinch myself about some of the places that this sport has taken me.

“When I go home to The Shire, it’ll always be ‘home’ but I think the curse of any professional sports person – or the curse of being in cycling or triathlon – is the travel. But it’s also good: the places you get to see and the people you meet, and you realise when you get home that you want to get out again. You get itchy feet.

“But Aussies are very well received all around the world; we’re easy-going, we’re straight to the point and that’s hard to find in this day and age.”

We see you with, ah… with hairy legs and…

…But I wonder, are you the kind of guy who is going to get such itchy feet that you’re going to step back on and go into the age-group category?

“The funny thing in my sport is that the amateurs have such a powerful voice and the sport is growing so quickly; last year three million people did a triathlon in some capacity – an Ironman brand of triathlon – so the problem is, as a former pro when you step into the age-group category everyone gets all upset. So I’ve got to have this hiatus time when people accept that I’m no longer a pro and that I’m fat enough to come back!

“That’s where I am at the moment.

“Technically I’ve got a couple of years of racing that I’m doing on contract and I still plug away at some Olympic distance and a few half-Ironman races but my life has switched.

“My wife said after 2012, ‘Priorities need to change. It needs to be family first and then sport.’ And that’s where it is for me.

“I’ll prepare for an event for six or seven weeks and then we’ll go as a family and do it – that’s the cool thing about triathlon, I must admit.”

Finally, when we did our interview for a ‘Why Ride?’ column many years ago, you talked about how if you were to do another sport, cycling was the obvious pick…

Having a look at the Tour now, do you wish you went off on that tangent back in your younger days?

“I think anyone who watches this does. It’s just a beautiful sport and you look at it from different eyes when you get a little older. I look more at the logistics of running a massive operation, a massive team… and when you’re a pro – and the bike riders are the same – you’re in your own world. The cyclists have their team but they’re not really aware of what’s happening around them. They just take it for granted and it’s an amazing life that they’ve got…!

“If there are any young kids who have dreams of coming to the Tour – and I think any kid who gets on a bike to race has those dreams – it’s well worth it.