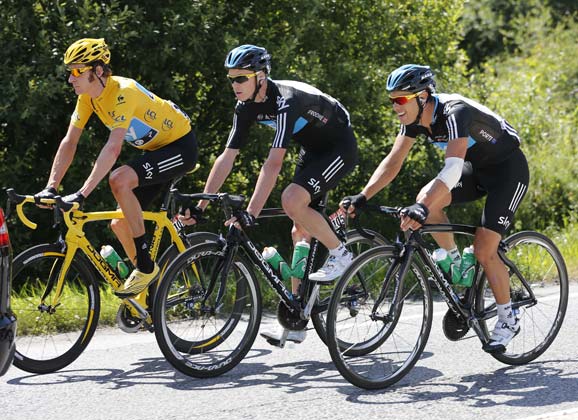 Comments from Porte about Wiggins and Froome

In part two of a little series comparing the two most recent Tour de France winners, we speak to the Tasmanian who has ridden on the same teams as four Tour champions. Richie Porte made his debut at the elite level in 2010 with the Saxo Bank team; he didn’t race the Tour that year but he struck up a good relationship with the rider credited with the victory, Andy Schleck.

Porte made his Tour debut in 2011 with Saxo Bank, racing alongside Alberto Contador. And in 2012 and 2013 he was part of the Sky team of Bradley Wiggins and Chris Froome, respectively.

Before the Tour de France last year, RIDE interviewed with Porte in Porto Vecchio and we asked who he’d be sharing a room with during the race. “Froomey. We’ll be everywhere together these next three weeks.”

Porte would finish second to Froome on the day the eventual winner first took the yellow jersey (stage eight, at Ax-3-Domaines). The pair are close and currently racing together at the Criterium du Dauphiné. 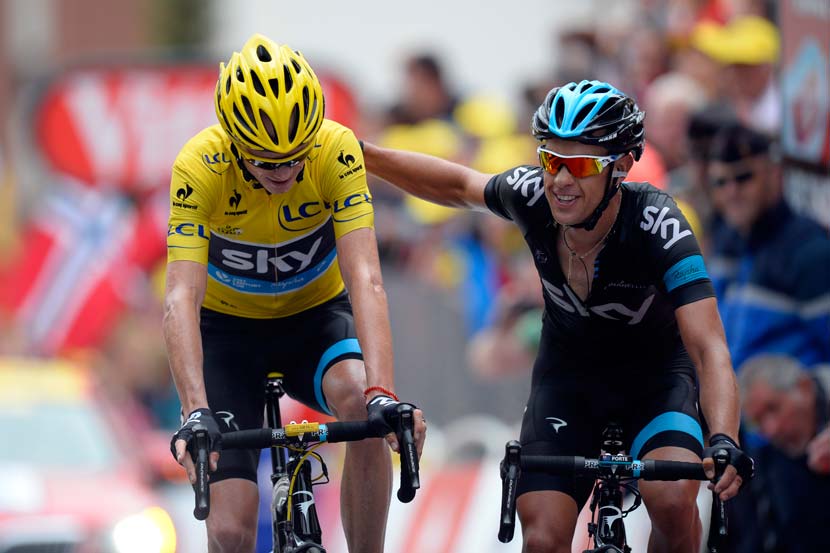 Finishing at Alpe d’Huez in 2013: Froome and Porte side by side.
Photo: Yuzuru Sunada

“We always get along well,” said Porte about his relationship with Froome. “I came to the team last year [2012] and we’ve been room-mates at every race we do together. We do get along well and I don’t want to make a big thing about just because he’s the race favourite at this Tour – that’s not the reason I’m good mates with him.

“I’m good mates with him because he’s a good guy.

“We’re on the same wavelength even if we are totally different people. I tend to get a bit irate if we’re trying to do team time trial training and there are motorbikes sitting in front of us or beside us with photographers trying to get shots… but he just doesn’t care. We’re chalk-and-cheese in some ways but we do get along very well.”

So, we pondered, how does Froome compare with the other GC specialists Porte has raced with? “The year I rode with Alberto – in the Giro that he won before having the title taken off him – there wasn’t much I had to do for him. The only thing I could do in that race was choose who was going to police the breakaway, that’s essentially all we had to do… and then control it. On the climbs, [Alberto] didn’t need any help… we couldn’t help him.

“There were times when Alberto punctured and I stopped to help him but then I got blown away by him straight away. That was just him; he’d catch up with me and then race straight past. And I’d be like, ‘Okay, that was pointless even stopping…’

“Andy [Schleck]… well, I really only rode Clasica San Sebastian with him in my first year at Saxo Bank and he told me he wasn’t ‘racing’ that day because Alberto wasn’t there to race against. This was just after the ‘Chain Gate’ Tour. Andy actually helped me that day. So I don’t really know what it’s like to race with Andy that much.”

And that leaves us with the two Tour winners from Sky. How does Porte rate them? “Both Brad and Froomey are guys I’ve raced with a lot.

“Brad and I raced together at pretty much every race we did last year [2012]. And Froomey was there a lot too.

“Brad is Brad. He knows what he wants. But the orders don’t always come from him. The orders would often come from Sean Yates who was a big mentor for Brad; he was the most brilliant sports director I think I’ve ever had, other than these guys like ‘Nico’ Portal who models himself a lot on Sean.

“The other rider on the list is Chris Froome and I have to give full credit to Froomey: in the last year he’s really stepped up on every level. The way he works with his guys is impressive. He’s really become a leader!

“Two years ago nobody knew who he was, did they? I remember talking to Bobby Julich who was studying the TrainingPeaks [power files] and he could see that Chris had a massive engine and huge capability. Now he’s just connecting the dots. That’s just how it is.

“People who don’t actually have any affiliation with professional cycling – the ‘Twitter Heroes’ – go on about him. They think, ‘How has this guy come out from nowhere?’ Well, cycling is an apprenticeship sort of thing: you don’t just become a superstar… unless you’re Peter Sagan or someone like that. With time, Froomey has developed into possibly the next big GC rider of his generation.”

In the Tour of 2012, Porte also shared rooms with Froome. Although it was early in the relationship between the two, they had already become friends because they both live in Monaco during the season, spent a lot of time training together, and they shared teams… there was plenty of opportunity for the Tasmanian to get to know the second British Tour champion.

“He’s exactly what you see when he’s interviewed,” said Porte about Froome after the Tour of 2012. “He’s a very humble, down to earth guy. I guess no one really knew much about him until the Vuelta [of 2011], where he really came out. We’re good mates and we train together quite a lot. We spend a lot of time together. To be honest, it’s not a surprise to me to see him doing so well. We train super hard together. In the media, they beat up the whole team – between him and Brad – but there was no animosity on the bus or in the peloton between the two.”

It was, after all, at the 2012 Tour that the relationship between Wiggins and Froome started to fester. So how was it riding in the service of both that year?

According to Porte, having such quality on the same team roster prompts better performances from all concerned. When talking about the training on Tenerife ahead of the 2012 Tour, he offered this appraisal of Wiggins: “It’s not really a competition, but there’s a guy on front, and you see them give a bit of a glance over, looking back at some point. There’s no racing, but I guess it’s always going to be a little bit competitive… That’s when you realise how good Brad was, because when we did an hour effort and he basically smashed us in training and it was like 38 degrees and a really hard day. That’s when you realise that guy is potentially going to win the Tour de France.”

Porte doesn’t hide the fact that Wiggins was the stand-out while the team was riding up and down the volcano for training. “I guess it’s the time trials that he’s put out have shown that He’s just so good. And that’s why we backed him so much in the Tour. He had the runs on the board, in training and racing.”

• Part one of the ‘Comments from colleagues’ – Geraint Thomas • 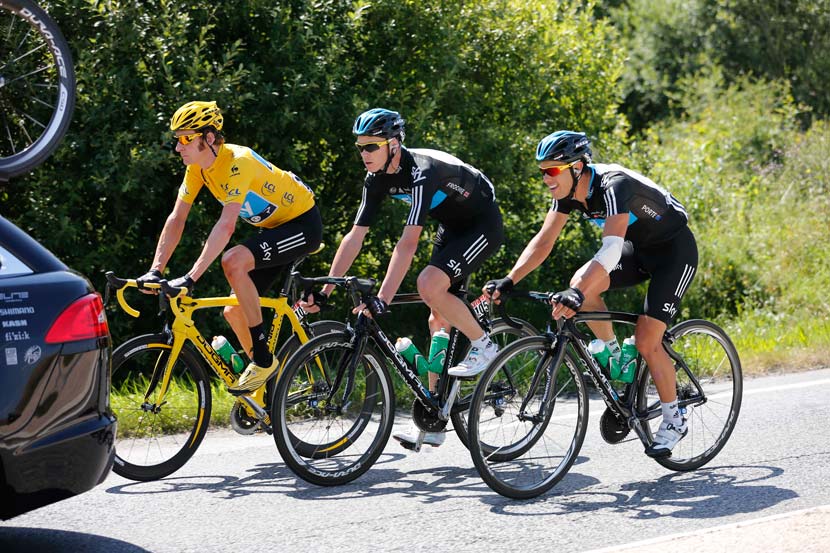 Paris on the horizon… Wiggins, Froome and Porte during the final stage of the 2012 Tour de France.
Photo: Yuzuru Sunada