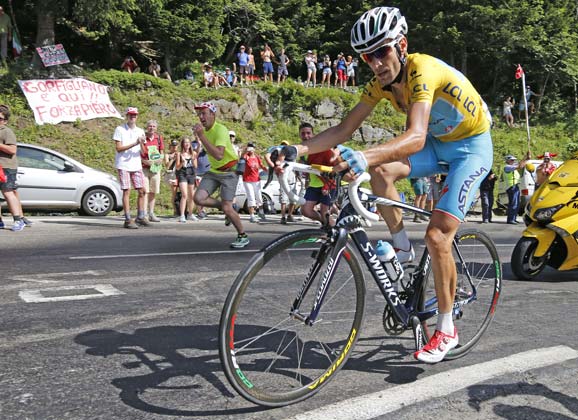 Damn you 13. Or should that be: bravo Vincenzo!

It’s likely we’ve seen the winner of the 2014 Tour de France claim another stage victory. Clearly Vincenzo Nibali is the best rider in the race. After the 13th the Sicilian has a lead of three minutes and 37 seconds over the new second place, Alejandro Valverde. And the Tasmanian who had been the closest challenger in the general classification, Richie Porte, has slipped down the rankings to 16th, 11:11 behind. 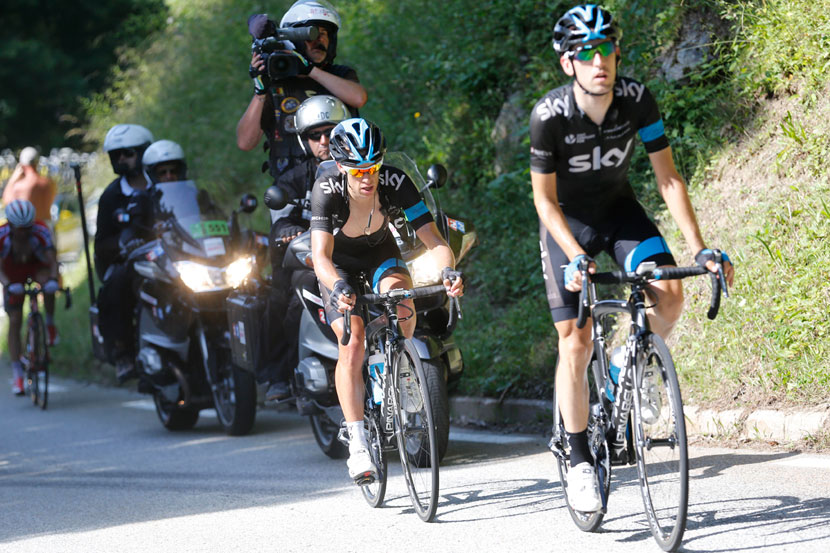 Mikel Nieve paces Richie Porte up to the finish of stage 13 at Chamrousse…
Photo: Yuzuru Sunada

Sky’s “Plan B” has fallen by the wayside. Baring some kind of miracle, the quest for a third successive title is over. Porte and his support crew had been optimistic. “It’d be an absolute dream to finish on the podium in Paris,” said the rider who began stage 13with a deficit of 2:23. He had survived when others had faltered. He was the second option for a leader at the 101st Tour. And he is still a rider with the charisma to compel Australians to tune into the race late at night. But the yellow jersey is now out of reach.

“I can’t get too greedy,” he said on the eve of the race’s arrival in the Alps. But his follow-up comment reminds us that this is cycling in the modern era: “Anything can happen, we’ve seen that this year on the Tour.”

Sky’s management had to amend their original plans. Chris Froome crashed out early but high performance manager Rod Ellingworth remained upbeat. “So far I think it’s quite entertaining,” he said after it had been decided that Porte would take over the role of team leader.

Before that, however, he’d uttered the fateful words: “You don’t know what’s around the corner.”

Before the 197km race from St-Etienne to Chamrousse, the mood at Sky was positive. Although the replacement leader had had health problems earlier in 2014, he’d recovered and changed his original plans. Leadership responsibilities for the Giro d’Italia were shelved. Porte skipped that race and rode up and down a volcano with those who would be his team-mates for the Tour de France.

They prepared meticulously as did other riders who had their eye on the yellow jersey this July. Chris Froome and Alberto Contador didn’t get the chance to see how they’d cope in the heat. Before the sun came up on the 101st, they were each denoted a “DNF”. They ended their campaigns in stages five and 10, respectively.

Onward to stage 13 marched Team Sky, confident that there was a solution to losing its original leader. But it wasn’t to be.

Porte was poised to strike, confident that he had the form to at least challenge for a place on the podium. At the finish in Chamrousse that seems highly unlikely. And the obvious question was posed: what went wrong? “Oh, I don’t know,” he sighed on a day when the temperature reached the mid-30s.

“I don’t think I dealt with the heat real well but it’s one of those things. It’s a massive shame but we’ll just see what happens tomorrow.”

And then a more sympathetic question from Matt Rendell in the media scrum at the Sky team’s bus: just under nine minutes, it’s not the worst kind of time loss that can happen on these days… “It’s not the best either,” came the reply.

“It’s a shame. I feel more for my team-mates who have been brilliant for me every day but if it happens to me, it can happen to other guys too. So I’ll just keep on pushing.”

Nibali returned to the podium. High in the Alps he accepted the accolades for his third stage win in this year’s race and then he reappeared two more times: once to put on another yellow jersey – his 11th in what is expected to be a growing collection – and then again to retrieve a polka-dot top.

‘The Shark’ is now also recognised as the King of the Mountains. He had 20 points after 12 stages and collected 50 more as the winner at the top of the first hors categorie climb of this year’s race. Double points, cool. But he doesn’t really care. That’s a consolation after an impeccable demonstration.

While Nibali was doing his rounds with the media, Porte was considering his options and his team’s principal, Sir Dave Brailsford, was reminding people of the reality of the situation. It’s upsetting to fall from a potential podium position but “that’s sport, isn’t it?”

“You know, we’ve won a lot in this race and you have your good days and your bad days,” said Brailsford. “You enjoy the good days and you’ve got to stay focused and keep on going on the bad days – and that’s what it’s all about.”

Australians are going to have to wait a little longer before they see another compatriot win the Tour de France.

It’s a shame, but it’s not the end of the world.

We are still likely to see quite a fight from the leader of “Plan B”. There is another stage tomorrow and more to follow before the races arrives in Paris. Winning is one thing – and it’s something wonderful when it happens – but it doesn’t mean there’s a need to be morose when some hope is lost. It’s just sport. It’s a bike race. It’s fun to watch and it’s good to cheer a guy who never seems to lose his smile. Even when Richie Porte is suffering, there’s a Cheshire grin that is infectious.

He had been keen to pick up from where Bradley Wiggins and Chris Froome left off. He had his chance. He stumbled in the closing 12 kilometres of stage 13 but he’s still in the race.

Only a day earlier he was singing the praise of the race leader. “For Vincenzo to attack like he did the other day,” he said, in reference to the second of the Sicilian’s three stage wins (thus far), “I think that takes balls.

“He’s taken the race on and we’ll just see what happens.”

Another day done, another fine display… tomorrow’s another day.

Vincenzo is the leader, Porte is now 16th overall, there are other challengers for the yellow jersey – the Spanish veteran Valverde, the best young rider Romain Bardet, the revelation of 2012 Thibaut Pinot, and the former winner of the Tour’s white jersey Tejay van Garderen.

“I’m happy with where I’m at,” said Porte on the eve of stage 13. “I’m happy that my health is good, my form is right where it has to be.

“It’s an uphill battle…” He was ready to have a go. And he did just that. But it didn’t work out this time, that’s all. 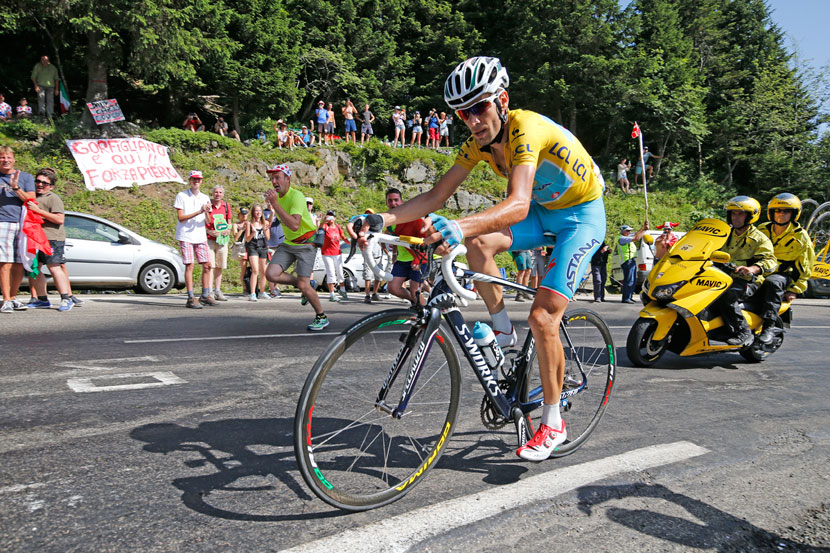 Vincenzo Nibali attacked the other title contenders with over six kilometres to go in stage 13. He’d ride the final three kilometres on his own before taking the victory 10 second ahead of Rafal Majka.
Photo: Yuzuru Sunada