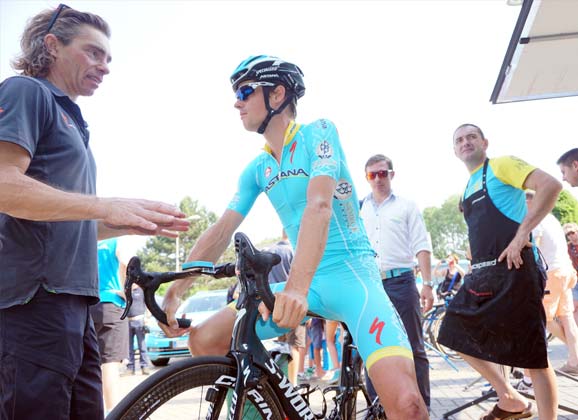 Feedback from Fuglsang on Specialized’s Venge

After a consultation with Jakob Fuglsang one of Specialized’s rider liaison staff, Chris d’Aluisio, explained some of the things that the Danish rider had spoken about after his brief test period on the new Venge ViAS.

RIDE spoke to d’Aluisio to get a summary of the feedback from the only Astana rider who will use the new aerodynamic frame at the 2015 Tour. 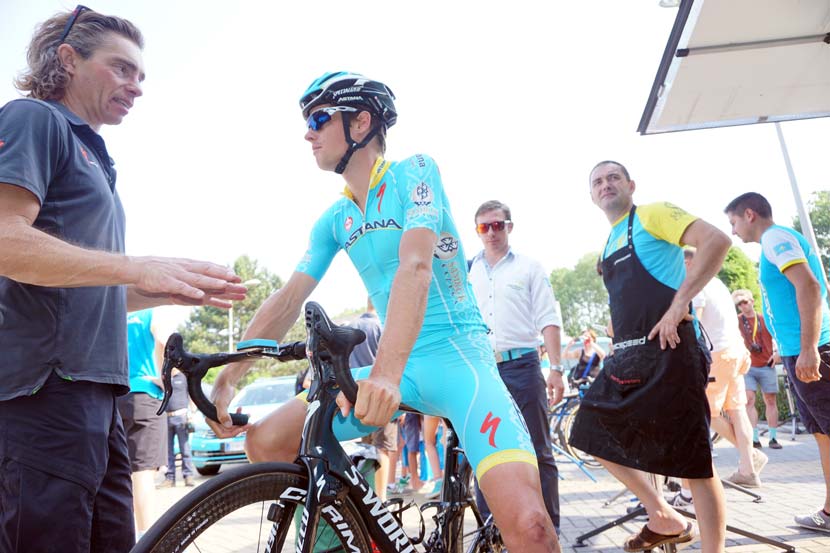 RIDE: There seemed to be a bit of discussion about the saddle. Can you tell me the name of this really short seat?

Chris d’Aluisio: “That’s the Power Saddle. It’s an evolution from our time trial saddle, it’s the road version of that. [Jakob] found that he wasn’t quite comfortable on the other saddle that he was one but the first time out on the Power Saddle, he felt right at home and he was able to train multiple days in a row and now have to take days off because of saddle problems…

“He was saying that it’s taken a little bit to fine-tune the position; that saddle is very specific but once you do find that spot, you’re very happy on it. 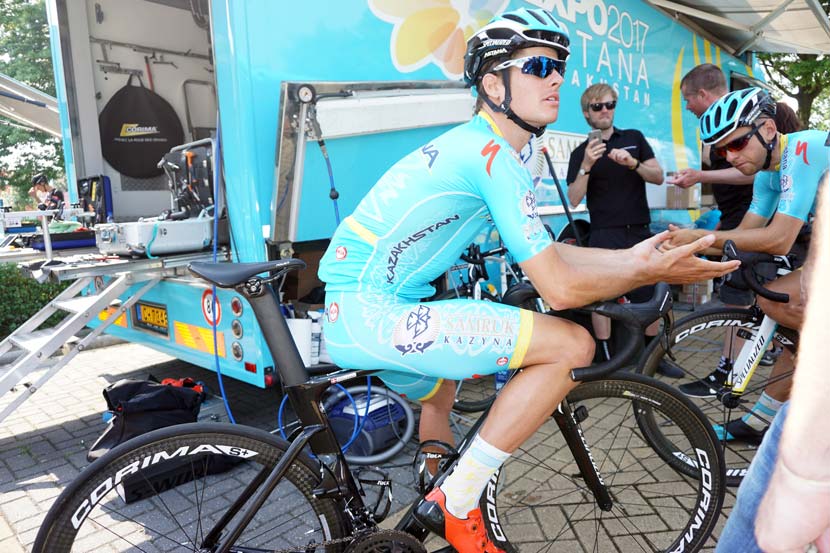 Does it alter the fit of the bike? You know how there’s all the regulations [see article 1.3.013] that you need to adhere to; is there anything that the saddle changes?

“Saddles are such a personal thing [but] as far as regulations, I think it allows you to get into positions that you normally can’t on other saddles based on where the tip of the saddle is.

“So you can really lean forward on that saddle and still be really comfortable.”

Was that behind the thinking of making it so stubby?

That’s the whole logic about it…? 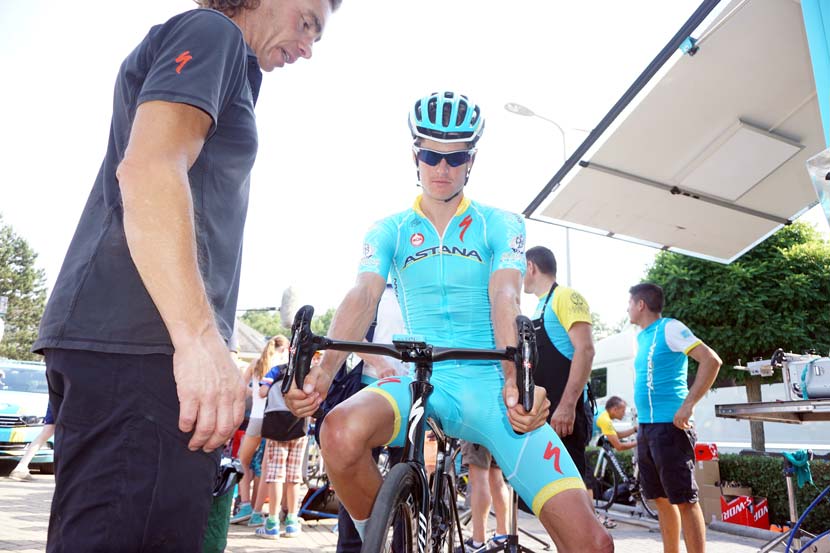 Then we saw Jakob toying with the handlebars and giving a little bit of feedback about the handling of the bike. I couldn’t hear what he was saying so can you give me some feedback that he offered you?

“He was talking about how, out of the saddle the bike feels really good. You saw him pointing at the bottom bracket and how the rear end stiffness is.

“When he was talking about the front, the way he was moving his hands was about how the bike handles on the road and how responsive it is on the road.

“He’s got his baseline which is the Tarmac [frame]. When we talk to the riders about their feedback it’s: ‘What’s your baseline…?’ And his is the Tarmac so we always start with that – about what the difference is and what he likes or doesn’t like about it.”

My understanding is that he’s the first from Astana to ride the new Venge… or any Venge. Is that right?

“I don’t know if he was on the other Venge. I don’t think so. He’s such a mountain climber and those guys gravitate towards the Tarmac but maybe you saw him saying how the felt the bike was ‘free’ under him when he’s really putting the gas down and that’s something, on this bike, you can really feel. It’s not holding under you.

“If you put on a box-section set of rims now, you yourself would feel it ‘pull’ under you. And this bike doesn’t have any of that. It’s just really ‘free’. This bike – and he’s saying it – really makes you go that extra bit harder.”

“He’s fine with them… there’s a lot of housing and cables and stuff like that and his bike doesn’t have the latest spec – it’s got all the early stuff – and I was telling him that I’ll be rebuilding his bike to the latest spec. And we’ll get more of his feedback after that’s done.

“He’s got two bikes here. I’m going to work on one bike while he rides this one and then he’ll swap.” 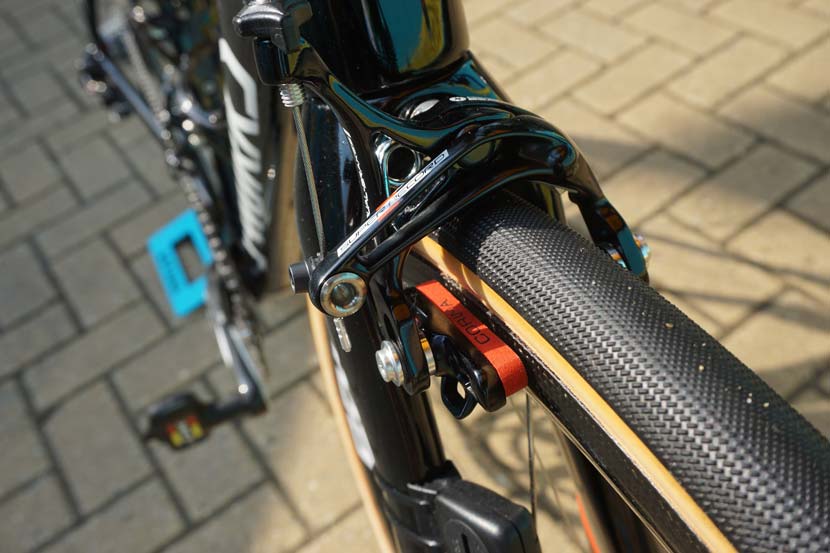 Campagnolo calipers and Corima pads… but that’s the Roubaix bike (for stage four) not the Venge ViAS for Fuglsang.
Photo: Rob Arnold

The other big difference with Astana versus the other [Specialized teams], is that they are with Campag. Does the new bike adapt perfectly easily to Campag? Are there any amendments required?

“My personal bike [a Venge ViAS] was built with Campy electronic [EPS] so I have a lot of experience with that and really there’s no difference… well, the only difference is that [Specialized] brake pad holders are for Shimano as standard – how they hold the pad – and the Campy is for Campy.

“But Astana has Corima pads on their rims so we’re okay.”

You’ve had [EPS] on the new Venge…

“I’ve had electronic Campy, I’ve had [Shimano] Ultegra mechanical, and now I have Dura-Ace electronic so my bike has seen a lot of different builds.”

The Campag battery is more cumbersome; where do you put it on the new bike?

“That goes in the down tube screws we have a special system for that.”

“Ah, did you notice [Jakob] was asking about the TT course? He’s considering racing the Venge in the TT.”

“It’s a fast bike and with a disc wheel [at the back] and a deep front [rim]… it could be really cool.

“It would be quite amazing wouldn’t it?

Yeah, well you raised it so I can see that you’re relishing this marketing opportunity…

“Not only that, it’s the rider benefit – that’s what we’re all about. We’re trying to make the fastest bikes for the riders and if we show that a road bike is as fast as a TT bike by winning a TT, or doing really well for the GC guy that’s powerful. So yeah, I’m really excited.”

Oh well, you can look forward to Saturday with a bit of relish… otherwise, while we’re doing a quick overview of the team – and we’ve been talking largely about Jakob because he’s got the new bike – is there anyone else with the new bike [at Astana]?

“On this team, no. We’re sticking to one rider per team so we can focus not only on the engineering but to allow the team to focus on the race. So, to keep it super exclusive and not having so much going on at the Tour de France with new bikes, it’s good to keep it focussed.”