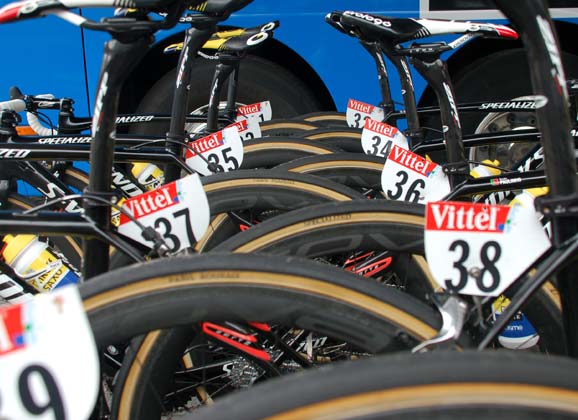 Gallery from the start of stage five

The stories from stage five of the 2014 Tour de France are going to be told for many years to come. The race from Ypres to Arenberg eliminated one rider from the field, but it happened to be the defending champion, Chris Froome. Others would crash. Many would falter. But 193 of the 194 starters reached the finish in a dramatic day in the race. Before the racing got underway, Rob Arnold took a few snaps from the site of the start on a day when cobbled roads demanded special equipment. With the rain pouring down, it was a day for the brave and the bold… and it was Lars Boom of the Belkin team who claimed the victory ahead of the Astana pairing of Jakob Fuglsang and overall leader Vincenzo Nibali.

Here is a collection of 25 photos from before the action got underway (click the photo below to begin the slideshow).