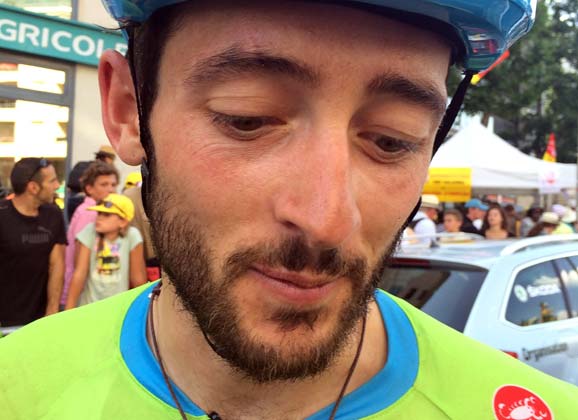 The Tour de France is big and beautiful and the race represents the pinnacle of competitive cycling. But, it’s still just a sporting event. It’s dressed up and presented to the world in a way that makes it seem larger than life but at the heart of it all is still something simple – sport. And one rider in the peloton believes that fun should be part of the game… 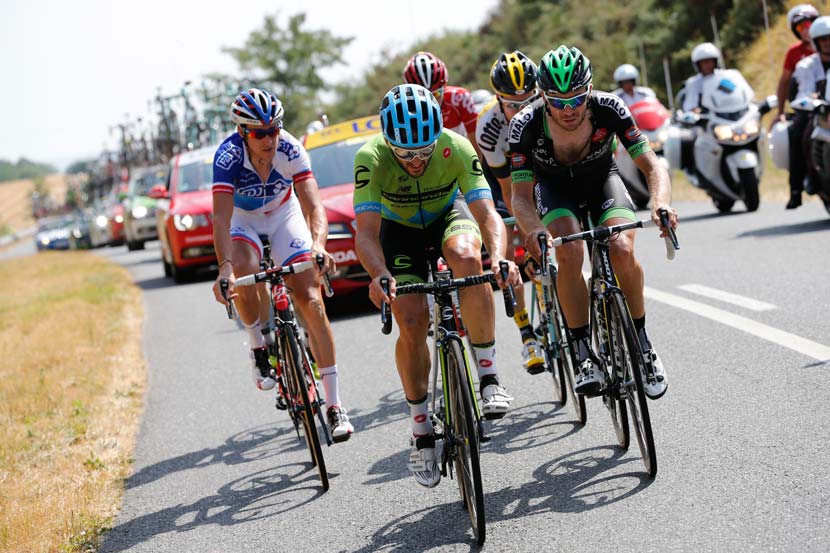 Nathan Haas, on the attack in stage 13.
Photo: Yuzuru Sunada

It’s yours, take it! That’s a motto of one rider in the Tour de France peloton this year. Nathan Haas is making his debut in the race and his attitude is to seize the chance to have a bit of fun. It is just sport after all. He’s been presented with an opportunity to ride his bike and be part of this enormous sporting fête and the 26-year-old from Cannondale-Garmin is cautious not to take it all too seriously.

“Have fun.” These two words were scribbled on his wrist with a permanent marker before the start of the stage to Rodez.

Haas enjoys riding his bike. He came to road racing via mountain biking. He liked downhilling and he kept on riding… never mind what sort of bike he was on, the beauty is that it allows him to get exercise, see the world and, yes: have fun. 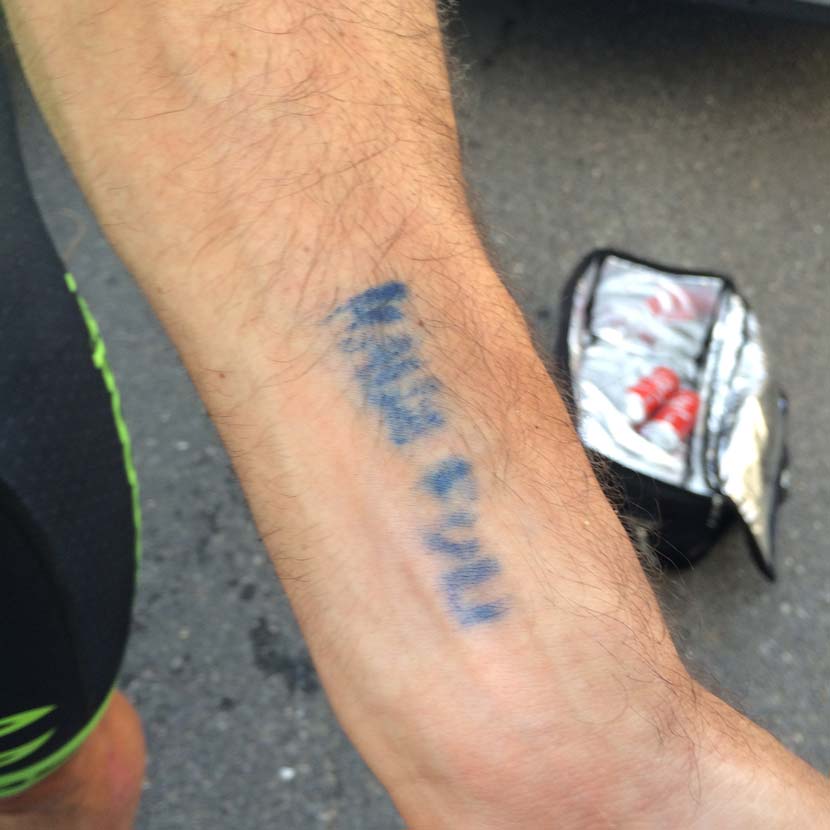 The message may have faded but the attitude remains… “Have Fun”.
Photo: Rob Arnold

It’s sport, it’s professional, and it is very serious business but no matter how good any pro athlete is at their job, they will never solve the greater problems of the world by winning a race.

On the road to Rodez, Haas was part of what was initially a 22-man breakaway group. He tried a few attacks towards the end but ultimately he would be reeled in by the peloton and finish amidst the mass of sweat and lycra at the end of a brutally hot 13th stage. Only a few days earlier, he couldn’t even ride at a gentle training pace without vomiting. “I think some shit sprayed up off the road on one of the wet days,” Haas said about what he thought made his stomach sensitive.

“Every time I put in any effort, the instinct was to spew.” 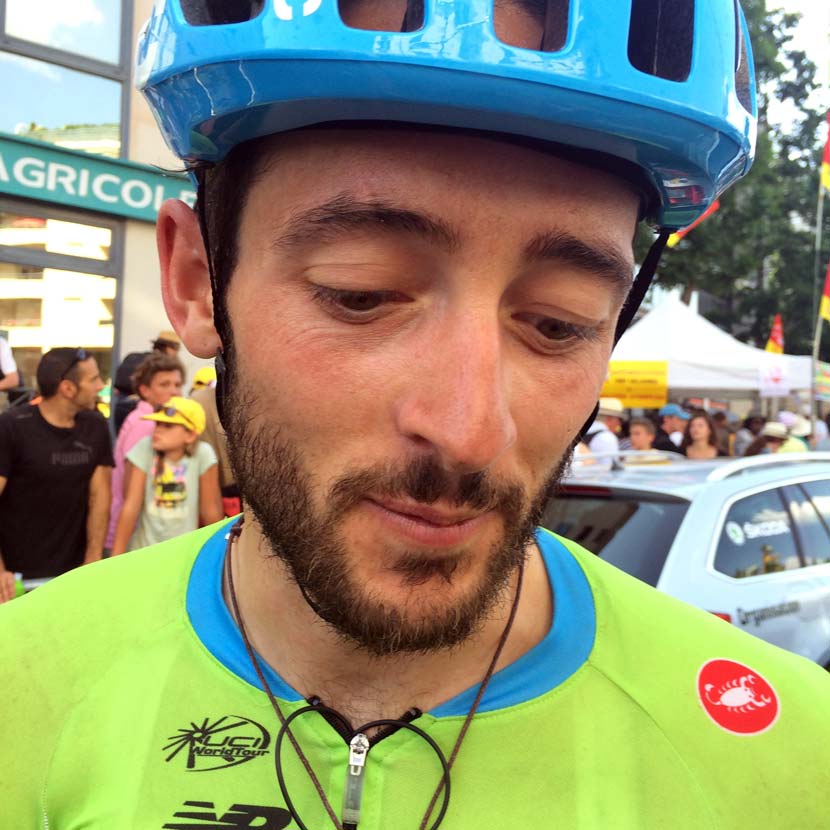 Oh well… no success in stage 13 but it’s not the end of the world.
Photo: Rob Arnold

His team is one of 14 yet to have won a stage. The second rest day looms and Haas has recovered. This is one reason why he insisted on being in the escape group in stage 13 – he wanted to be at the Tour do race, to challenge himself, to help his team-mates earn results, or to have a go himself. When his body allowed it, he took the chance.

It’s yours, take it! On y va, you might not get this chance again.

The chance of victory ended outside Rodez but once he crossed the line in 97th place – his jersey coated in salt, his legs empty because of the effort – he offered a grin. He tried. It didn’t work. There’ll be another day.

You can only do what you can do, that’s what I told him when we spoke minutes after the stage. He laughed. You were up there, having fun, showing yourself…

“On my wrist it says, ‘Have Fun!’ That was my mission for the day.”

So Nathan, did you have fun?

“Yep. You’ve got to be the hammer and not the nail sometimes.”

It was hot, the temperature at road level was said to be over 50 degrees Celsius. It’s a Tour de Canicule in 2015. 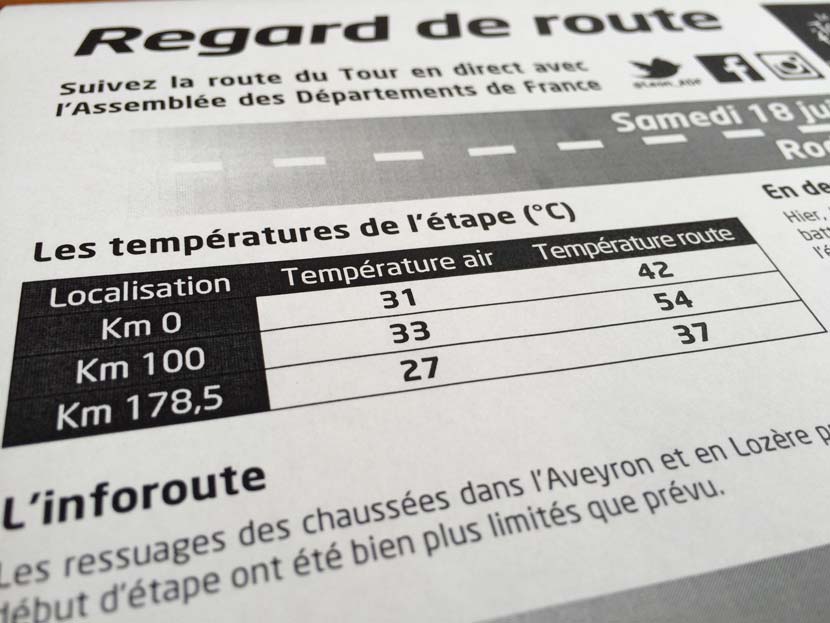 Haas admits that the heat made it difficult but he was not alone and he was not complaining. Still smiling, he was being pushed by his team’s PR person and told to return to the bus but Nathan wanted to talk. The conditions weren’t conducive to racing “but,” Haas admitted, “I actually thought that was what was going to give us the edge on the peloton.

“Once everyone is hot, everyone is damn hot. And I’ve seen it have an effect on the racing before, like at the Tour Down Under when a break can go and you try to bring it back but the peloton can’t do anything.

“Sometimes once you’ve got that two minute buffer it stays that way.

“I was kinda hoping it was going to be like that but in the end it didn’t happen.”

Three from the breakaway would stay ahead until the final kilometre but the peloton was intent on catching the escapees and that’s what prompted Haas to attack a couple of times towards the end of stage 13.

“I probably messed up the party a little bit but I felt we were going just a bit too slow on the second last climb. My race instinct just said, ‘Go!’ So I hit them and I was away by myself for four or five kilometres… it put the fire under everyone’s bums to go faster. On the next climb, [Wilco] Kelderman went and he’s a GC guy who can go top 10 so staying on his wheel at the end of a hot day is a bit of a mission.

“I’m a bit upset that I couldn’t stay on the wheel because it’s nice to have the fight all the way to the line but I’m pretty proud of the turnaround I had from being so crook early on. It’s character-building and, at the end of the day, a lot of my inspiration comes from how I want to remember myself at the end of my career – and I want to be a fighter.

“I woke up and knew I wanted to be in the break. It was a choice.”

It’s yours, take it! And don’t forget to have fun. Write it on your arm if you must, but try not to forget the reasons why we ride.