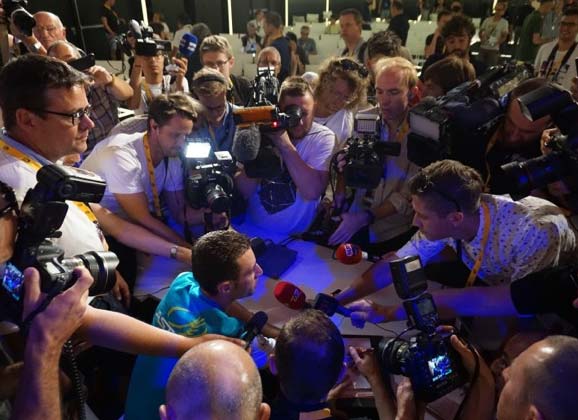 On the eve of the 2015 Tour de France, many of the teams assembled to complete their final obligations of the pre-race ritual – the press conferences. Popular opinion amongst the riders is that it is a four-rider race for the general classification but there are plenty on the outskirts waiting for an opportunity. Below is a wrap of eight teams’ intentions before heading into the biggest three weeks on the cycling calendar.

– Story and photos by Jack Lynch 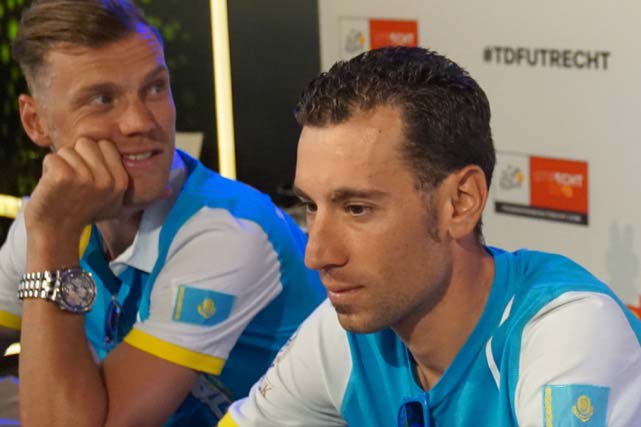 The defending champion Vincenzo Nibali with Dutch team-mate Lars Boom in the background… before the news of Boom’s possible exclusion was made public.
Photo: Jack Lynch

2014 was something of a breakout year for this French staple. It won the teams classification, Romain Bardet was sixth in just his second Tour, and 37-year-old Jean-Christophe Péraud finished in second place. This year has been built around Bardet but the prodigious Frenchman suffered a crash during the Critérium du Dauphiné and it proved quite a set-back. He only, “dreams of a top five,” finish rather than it being a realistic goal. His concerns are physical rather than mental and he feels prepared to improve over the next three weeks.

Péraud said that he learned how to be at the front of a team last year but is unlikely to find himself at the race’s pointy end when the main riders start turning the screws.

IAM’s directeur sportif Rik Verbrugghe believes that his team has a chance to win almost any stage in the Tour. Mathias Frank (SUI) is its GC rider and should be aiming at a top 20 finish. After a reasonably strong showing, he withdrew on the penultimate stage of the Dauphiné after passing out due to illness. Frank returned to racing two weeks ago at the Swiss national road champs and showed good legs, finishing third.

Former hour record holder Mathias Brändle is a genuine chance for the opening TT and will be a strong player in the team time trial where Verbrugghe hopes the team will place between fifth and tenth.

Sylvain Chavenel remains IAM’s best chance for, as Vergrugghe puts it, “freelance,” wins this tour. Always the opportunist, the Frenchman will no doubt be seen off the front of several occasions in July.

Despite having two Australians on the IAM roster, neither David Tanner nor Heinrich Haussler are in the nine-rider ensemble. Tanner was first off the bench but could not quite make the cut and Haussler made a decision at the early stage of the season to focus on the early-season Classics. 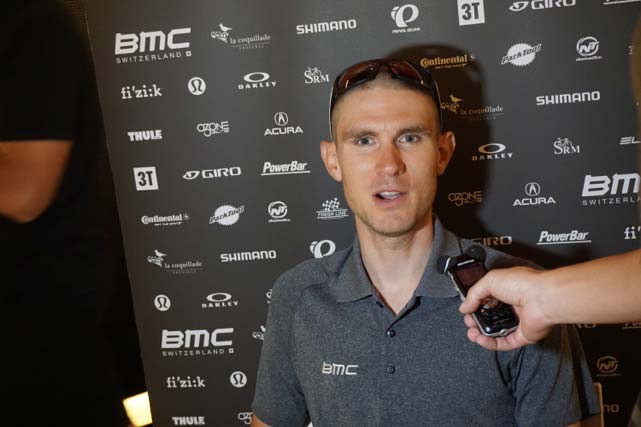 Thanks to a good showing (and near miss) at the Critérium du Dauphiné, BMC Racing Team can put its faith in an in-form rider, who is a genuine chance at stepping onto the podium at the Champs Elysées. Tejay van Garderen says that he is feeling the best he ever has at this stage of the year. Despite having his yellow jersey usurped by Chris Froome on the final day at the Dauphiné, van Garderen feels that, “the Dauphiné raised my confidence because I was able to play on that level.”

Helping him to stay at that level is a team which blends experience and youthful talent across a range of parcours. Damiano Caruso will be van Garderen’s right-hand man in the mountains, after finishing eighth at this year’s Giro d’Italia. It is the Italian’s first Tour but he will have a strong role to play. Sammy Sanchez, Manuel Quinziato, and Daniel Oss all bring strength and experience to guide Tejay through the bunch and into a winning position.

If there is one rider whose focus is not squarely fixed on van Garderen it is Greg Van Avermaet. His year has been one of the most consistent in the peloton, peppered with podiums and top tens. Van Avermaet toed the team line saying that he was riding for the American leader but revealed that he wanted a stage win in the first week of the race saying, “hopefully I get a good result this week.” He’s entitled to ask team manager Jim Ochowicz for a chance considering that several stages resemble the one-day Classics which the Belgian relishes.

Van Garderen admits that he is not suited to, “acceleration and explosiveness,” saying that it is, “not really my style,” but he has the belief that he can match it with the best. When asked about the four favourties he replied, “those four guys have deserved their status, but I’m going to race this like I’ve raced the Dauphiné. I don’t care what someone’s name is or who they are when I race.” He sounds like a confident American who is ready to race hard and earn respect from his peers and the public.

Orica-GreenEdge is a team with different goals to those of 2014. It does not expect to lead the race, but is hoping to take line honours on several days. Simon Gerrans has had a fairly luckless season thus far and does not expect to wear yellow early as he has in the past. Always looking for success, the Victorian wants to do, “what I do best and chase stage wins.”

This is a continual theme from the squad with Michael Matthews choosing not to target, “flat sprints,” and focus on those more difficult. Daryl Impey is the same, as is Michael Albasini. But four does not make one and each stage’s team leader will be selected in advance by directeur sportif Matt White. White suggests that for Orica-GreenEdge, “a stage win would be very pleasing… multiple even more so.”

Stage wins are important but so is the development of young riders so Adam and Simon Yates are getting their chance to mix it with the best in the mountains. Adam is probably the greater stage win prospect at this year’s Tour but has no expectations of featuring anywhere near the top end of the GC. Laughing when asked why he was not honing in on his overall prospects, Yates said, “it’s going to be too easy to lose some time in the early stages!”

Later on in the Tour, when the work for Albasini, Gerrans, Impey, and Matthews (in alphabetical order) has been done, Svein Tuft, Peter Weening, and Luke Durbridge will get their chance at surviving in a break.

Orica-GreenEdge riders are always in the mix at Grand Tours and expect this in France in July. 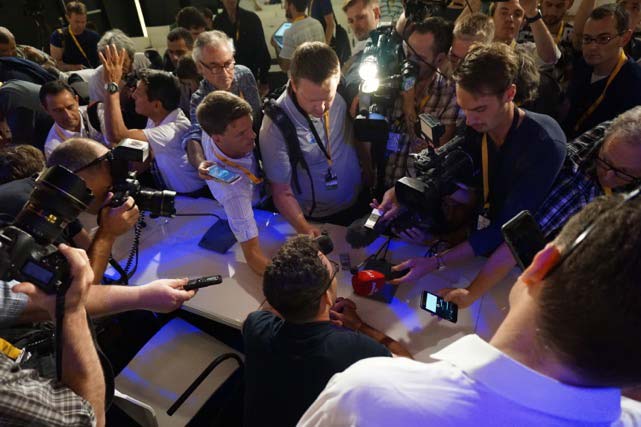 All teams say they have an opportunity for victory on every stage, but when EQS says it, it is widely regarded as the truth. Stage one’s 13.8 kilometre time trial through the streets of Utrecht will not – barring incident or inclement weather –be raced without Tony Martin featuring in the top ten. The three time world time trial champion is in scintillating form against the clock having already won three time trials this season including the German national championships last week. A rider like this will always be at the top of a leader board when it comes to solo efforts but Martin’s influence will also greatly aid the EQS team during stage nine’s 28 kilmometre team time trial.

In the mountains Rigoberto Uran is the squad’s best chance. He completed a relatively disappointing Giro d’Italia in 14th place and will not be closely marked by the favourites. He is not his team’s primary objective and will therefore not get the required support in the Alps or Pyrenees, but this could work in the Colombian’s favour as he will be able to suck wheels without guilt or expectation to take even turns. Uran says he is happy to support the team when necessary but is looking forward to a chance to show himself later in the race.

Zdenek Stybar and Michal Kwiatkowski will before be near the front on the more ‘difficult’ stages. Kwiatkowski has had a reasonable season in the rainbow jersey and Stybar knows how to judge his effort over a day’s hard racing.

And then there’s Mark Cavendish. He’s won 25 stages and says that he, “missed the race a lot,” last year after tangling with Simon Gerrans in stage one’s closing metres and subsequently withdrawing. Whilst he won’t admit it, the Manxman must be relieved to know that his greatest challenger, Marcel Kittel, is not lining up at this year’s Tour. With this news, he is expected to win plenty of stages for his Belgian team. 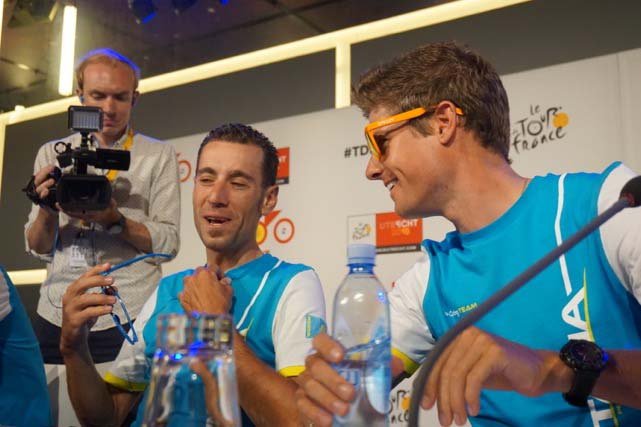 Defending champion Vicenzo Nibali looked relaxed as he stated (with the help of a translator), “I am in the same state of form as last year. Contador, Quintana, and Froome have all won more than me, but I’ll take it day by day… I have had the ideal preparation.”

It is hard to consider his lead-up ‘ideal’ but Nibali has not suffered any major set-backs in his title defence. To further improve his chances, Astana recruited Dutch strongman Lars Boom. The former Belkin rider juxtaposed his cyclocross prowess and as his huge engine during last year’s infamous fifth stage, taking stage honours over the cobbles of Northern France. Nibali placed a brilliant third, right behind team-mate Jakob Fuglsang. If this result is mimicked in the treacherous Stage Four in 2015, then it will be Astana filling the podium which will certainly rattle Nibali’s adversaries. 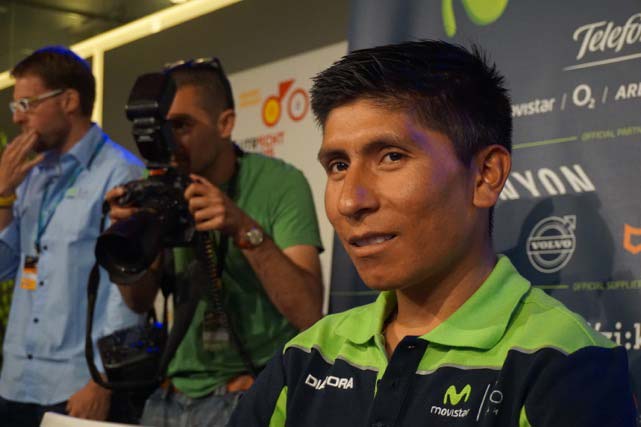 Only two riders from the Spanish team fronted the press on the eve of the Tour de France – perennial favourite Nairo Quintana and the ever-victorious Alejandro Valverde. Movistar knows it has one of the favourites and is putting all its eggs in the Quintana basket. The Colombian believes Nibali and Contador are his two fiercest rivals but Valverde says that, whilst it will be difficult, the Tour’s route is primed for his team-mate. 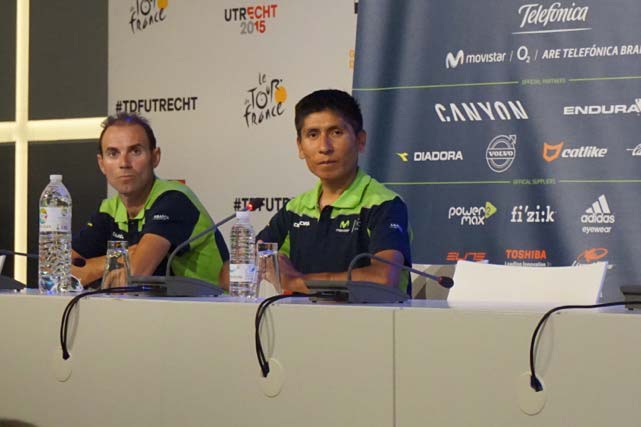 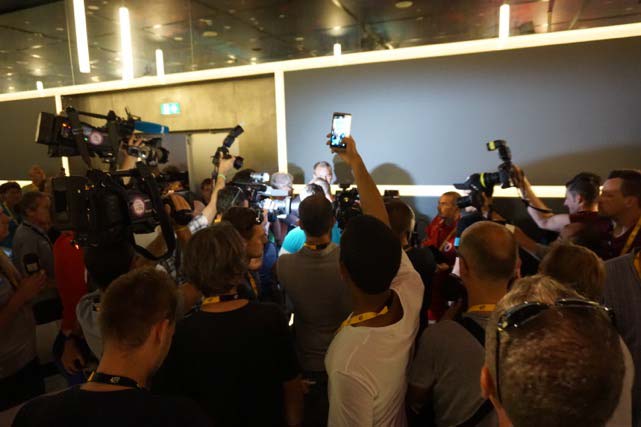 Team Sky has won this race twice in the past three editions and, with Chris Froome back to his devastating best in the Dauphiné, there’s no reason why he can not repeat his victory of 2013. The team has been built around Froome with a plethora of, “mountain goats,” to put him in the front group as the race moves through the vertical stages. Australia’s Richie Porte is happy to be one of Froome’s goats and is looking to put a disappointing Giro campaign behind him and vehemently pursue team success.

Froome has been said to have been a little bit fragile in the past but he sat confidently in the press room and proclaimed that, “the journey for me started a year ago when I crashed out of the race.” Acknowledging failure is the first step to redemption and when asked whether or not the cobbles of stage four are playing on his mind he joked, “I need to set the record straight, I didn’t even see a cobble last year.” Froome, clearly more relaxed than in 2014 cites the news of his wife’s pregnancy and entering the race as the defending champion as keys to his reduced stress. It will be known over the next three weeks whether or not the Brit will be able to keep his cool.