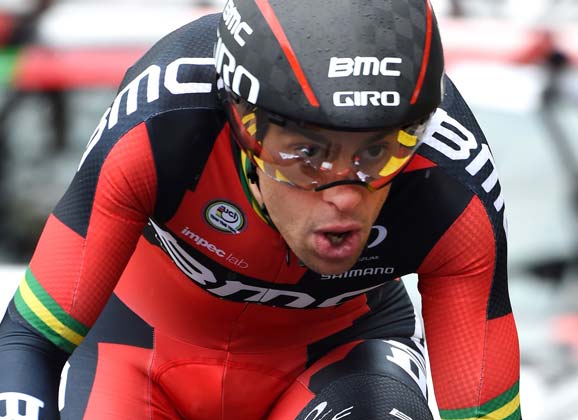 For part two of our interview with Richie Porte prior to the Tour de France we take a point-by-point approach on a few topics – from favourite foods, his approach to eating, his performance in the Criterium du Dauphiné and what he likes doing when he’s not racing his bike… 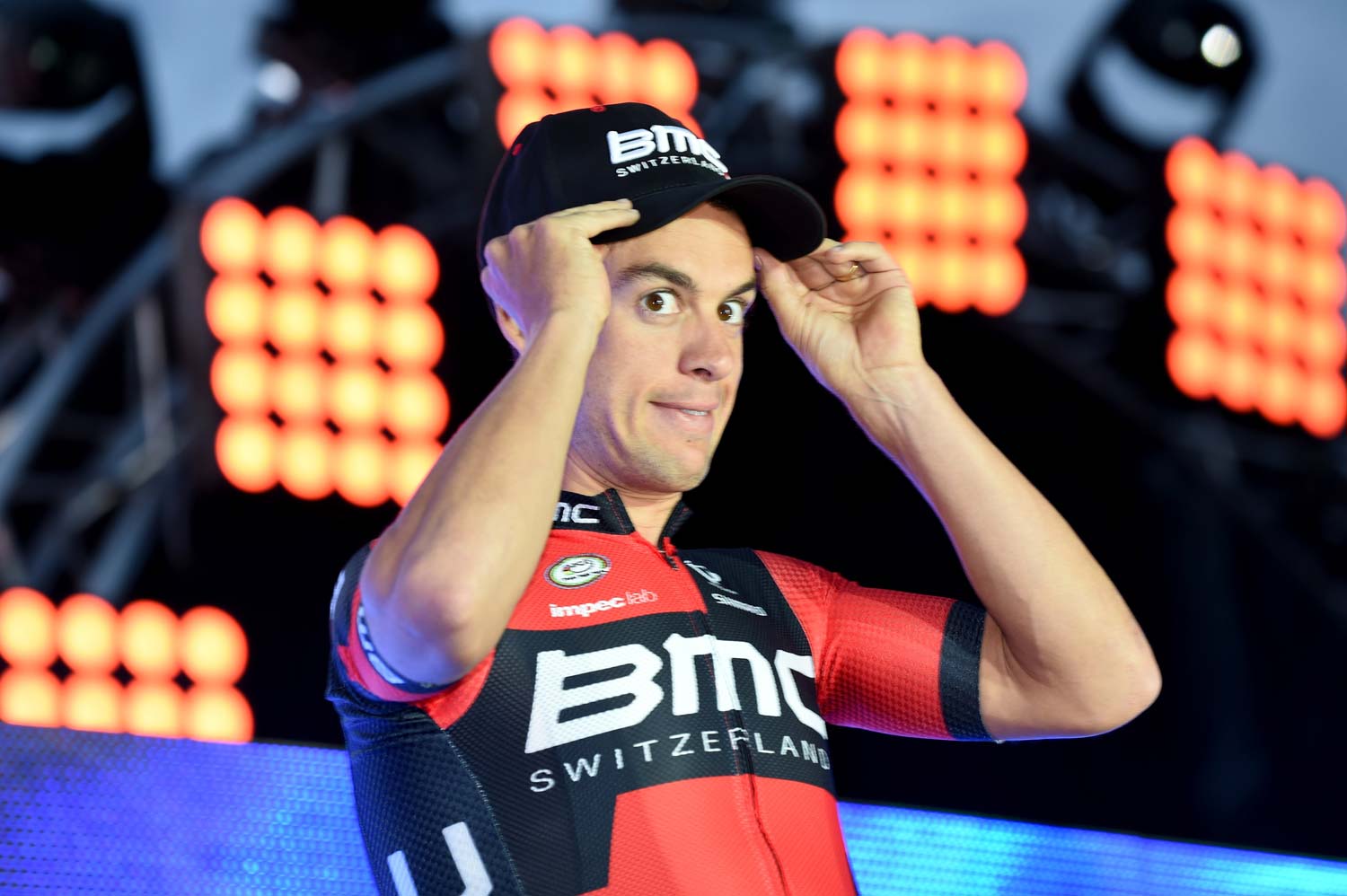 Okay, let’s consider the coming days for a guy like Richie Porte. Many in the cycling world are buzzing at the prospect of the 103rd Tour de France: it’s due to start in just nine days. The Official Tour de France Guide is on sale, for many readers the poster is already pinned on the wall, and a significant stint of lounge time is being considered.

For the fan, there’s a lot to look forward to in the weeks ahead.

For the rider, it’s a time to get the job done. Fitness is honed, final preparations are completed, interviews are conducted, packing is about to get underway, a deep breath is taken… and a big focus is on finding the most relaxing way possible to arrive at the Tour de France ready for action.

“Stress doesn’t do anything for you,” said Porte in part one of our interview with him 12 days out from his sixth start in the Tour, “it doesn’t get you anywhere.”

There’s pressure on him to perform and BMC Racing announced it’s nine-man roster for the race from 2-24 July overnight. He’s a co-leader of a team that’s won the yellow jersey before.

“Richie and Tejay [van Garderen] will both receive equal support from the staff and riders within the team structure during the race itself,” said the team’s general manager, Jim Ochowicz. “Throughout the race Richie will act as BMC Racing Team’s road captain.”

This time next week, Porte will be near Saint-Lô. He expects to be ready for the challenge that awaits. But what about The Other Stuff, the ordinary elements of life in the days that lead up to an intense period of competition? What does a guy like Richie do in that time?

Diet is a big deal…What does Richie eat in the fortnight leading up to the Tour de France?

“I’m a big fan of breakfast smoothies. I’ll have a lot of things like avocado and bananas and maybe a bit of porridge stuffed in there.”

What about lunch and dinner when he’s at home… without a team chef?

“I’ve got a friend who works for Huon Salmon in Tassie, he’s Scottish originally and he got me a few kilos of good Scottish salmon. I’ve been eating that: hot smoked salmon for lunch and then a bit of race and salmon or something like that for dinner.”

So… where is diet managed better: at a team training camp or at home?

“When I’m at home it’s just so easy to hit my routine and stick to it, whereas if I’m on training camps and the team’s chef is there, the food is always super healthy – but I always find myself eating a bit more than what I really need to.

“It’s like a buffet presented by the team chef so I’ll eat whatever is there – and I end up finding myself eating sometimes double what I would at home.

“I just find that if the temptation is not there to eat more than I need to then I don’t. But it’s hard on those training camps where everybody is watching each other and what they eat.

“At home it’s just so much easier.

“It’s different when you’re at a race: you do need to actually fuel up.

“It just nice to try and keep it simple, like rice and fish and things like that. But obviously omelettes in the morning at races…” 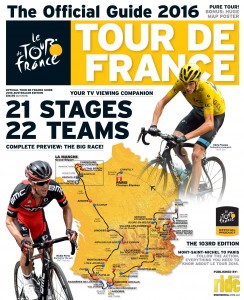 Get your Official Tour Guide (2016 Australian edition) – on sale now!

Does Richie have a food fantasy that occupies his mind when he’s actually dieting and watching his weight?

“I do have to have a little bit of a blow-out after races like the Dauphiné but it’s amazing how good I am with my regime. There are times when I’m thinking of an extra banana in my breakfast smoothie. But when my head falls off and I’m eating everything and anything, that’s when I realise how good I am at managing temptations.”

And so, what’s the food indulgence that he eventually caves in to?

“What else do I crave, Gemma? What’s my other vice? Oh yeah… Strawberry pencils – those lollies.

“I mean I don’t really eat pizza or anything like that and I don’t really miss it but my vice lately has just been sushi. Michael Matthews found this secret sushi joint in Monaco so we’ve been hitting that up a little bit. It’s actually proper Japanese, a Japanese family running it. And it’s quite reasonably priced for Monaco as well.”

What will Richie do in the final few days at home before setting off for the Grand Départ?

“There’ll be a lot of watching TV. Just relaxing when I’m off the bike. And then there’s massage and osteo and all those sorts of things to just get the body in tip-top shape and keep the mind as refreshed as I can.

“I’ll try and keep the mind off the stress of the next three weeks.” 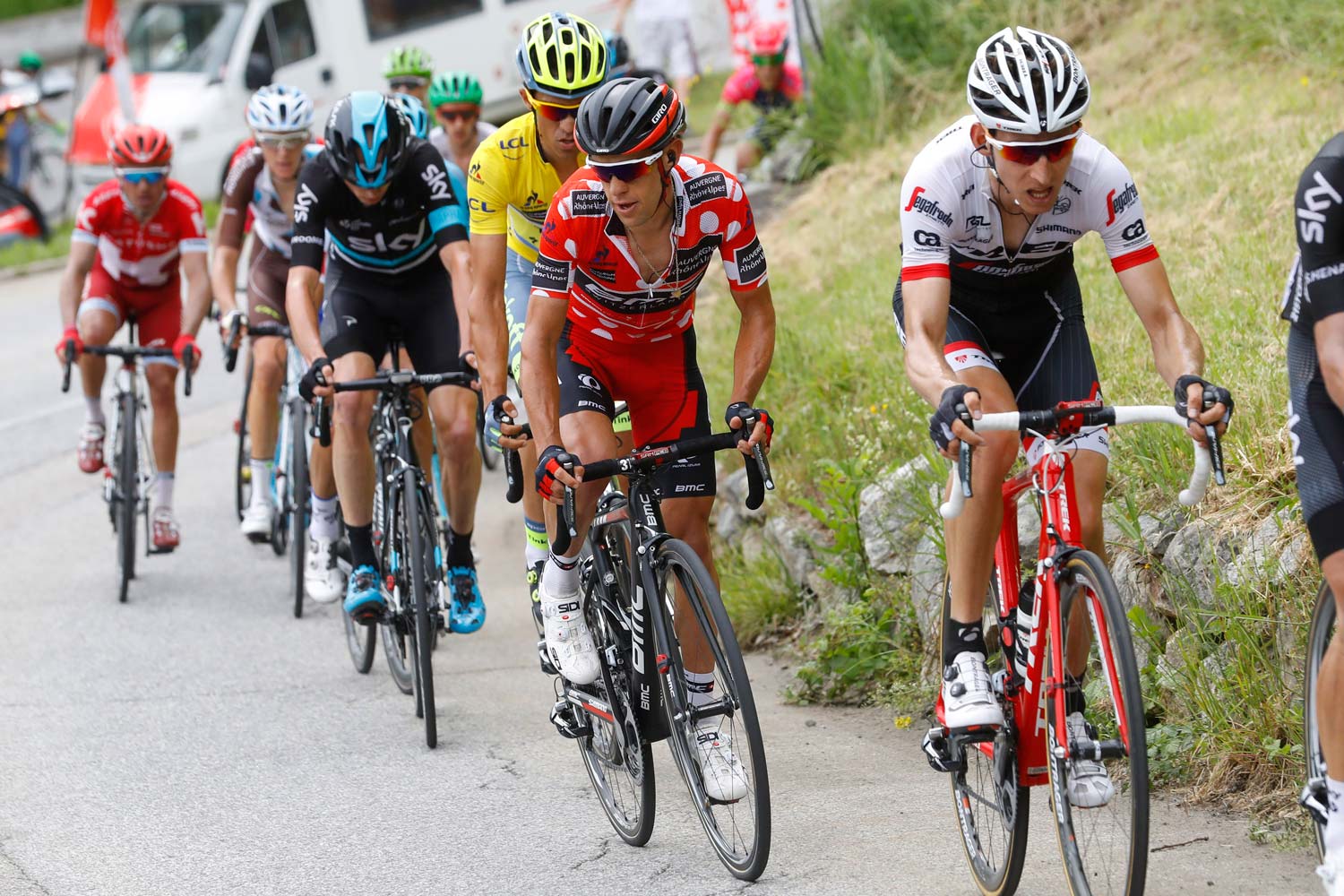 Are there any special tips that you have for others who are going to spend a considerable amount of time watching TV in the coming weeks?

“Obviously it’s good to have a nice, long couch so that you can stretch out on it. But, for me, the biggest thing that I’ve been doing this year is stretching while watching tellie… That’s not on the couch but I’ve been doing a lot more than I used to.

“I’ve been injured and for me the avenue I’ve taken is just stretching. I’m even at the point now where I really enjoy it. When you’re getting on a little bit, you need to really take care of your body.”

And the specifics of Richie’s viewing…? What shows does he like?

“When I do get on the couch I’m watching Game of Thrones or my new favourite show at the moment, Peaky Blinders – just shows like that. And that other show, the one about houses… Grand Designs – I’m addicted to that a little bit too.”

Okay, back to racing… Richie was fourth on GC in his final pre-Tour stage race. What did he get out of his experience at the Criterium du Dauphiné?

“I can take positives out of finishing second in the prologue… When I looked at the course the day before, I knew it was quite good for me but I didn’t really pace it properly. I kind of blew up at the top of the steep stuff.

“I think Alberto and I were quite even until the last 300 or 400 metres and I really found that that was where I just didn’t have anything.

“I tried to get in the big chainring and then I had problems trying to get that – which was my fault – but then I just couldn’t get on top of my gear. Whereas with hindsight, being a wonderful thing, I should have just ridden my small chainring to the finish.

“I think it was nice to start the race like that, it’s a totally different style of prologue and the fans loved it, the people out there really loved it.

“It’s just nice to have a prologue that suits the GC guys a bit more.”

“Yeah it is. Obviously to go from second to fourth on GC in the last 500 metres is a bit of a bitter pill to swallow. That hurt, to be honest.

“In a sport now where the UCI points are just so important to miss out because of something so silly – just from getting boxed in – is a bit of a shame but the Dauphiné is a hard race.”

Short stages are cool. Yes or no?

“Yes. When the organisers put in those short hard stages, it makes for a hell of a race… you’re going to get the same result as if it was 80 kilometres longer.” 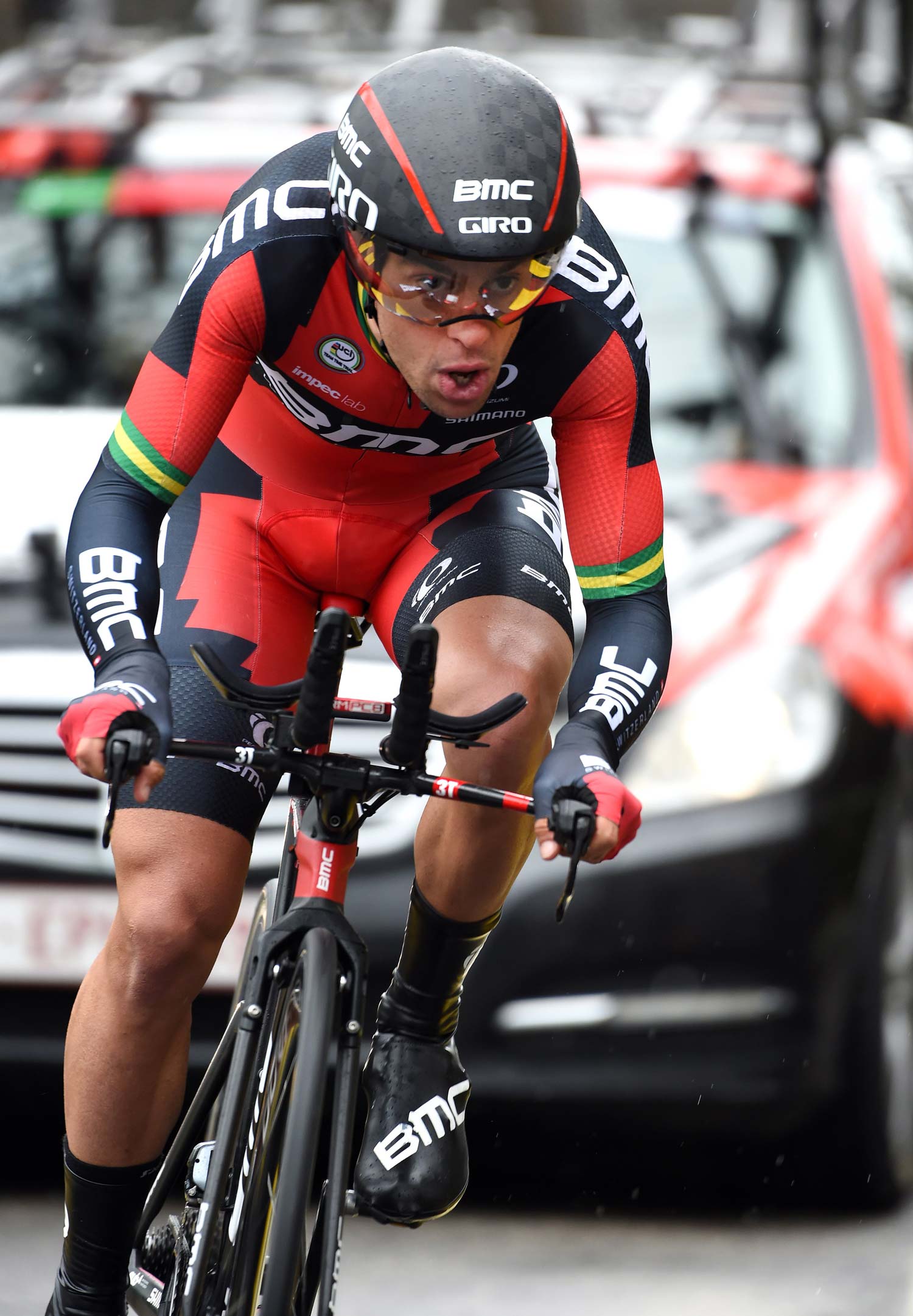 We know that one of the main animators at the Tour will be Contador. He danced ahead of you a few times at the Dauphiné but never really gained much ground. Is that some sort of show of strength and how do you see antics like that?

“I don’t know. It can be looked at as desperation.

“He does these attacks which are fantastic for television but I just like the fact that I’m not in Sky now, having to chase it. I can sit back and let them take control.

“People question me: why didn’t I attack? And the simple fact of it is: because no one is going to go anywhere. It’s hard to attack at that point in time anyway, because you’re just so much on the limit.

“You see Alberto attacking and he’s getting brought back to the peloton. I mean: is it really worth it? It’s not really.

When Contador was attacking there were times you were talking to Froome. What was being said?

“Yea, what were we chatting about? I think we were talking about something totally unrelated to the race. I don’t know.”

You’ll be racing against Froome for the first time at the Tour – what can we expect from friends who are now rivals?

“Chris and I are good friends off the bike and in certain cases it’s going to make sense to kind of work together as much as we can if we’ve both got a common interest, and that’s putting time into rivals, then why not do it?

“There’s always cooperation out on the road between guys. And then the next day they turn around the kick them in the teeth. It’s just professional sport, isn’t it? You’ve got to have allies as well.” 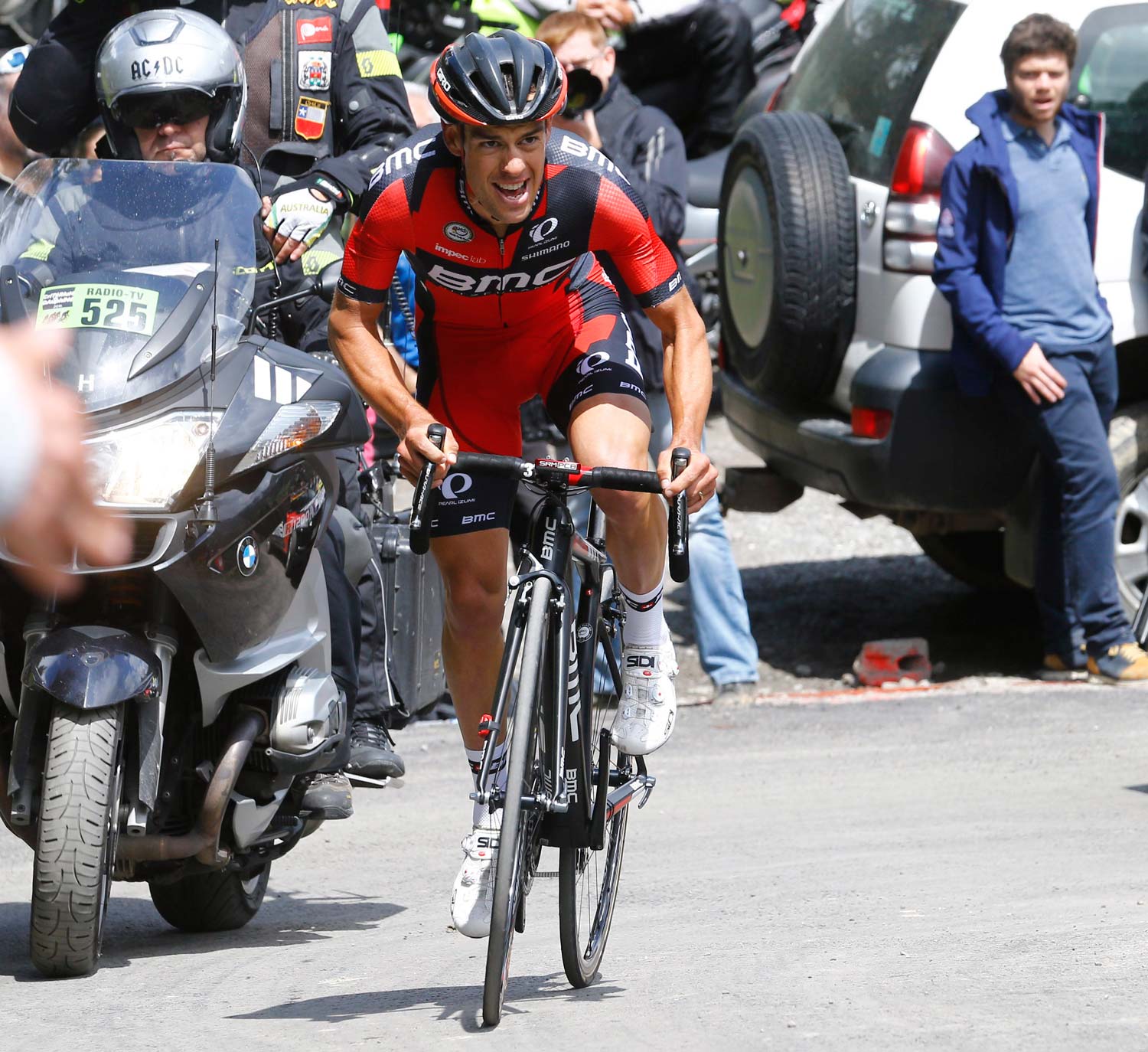