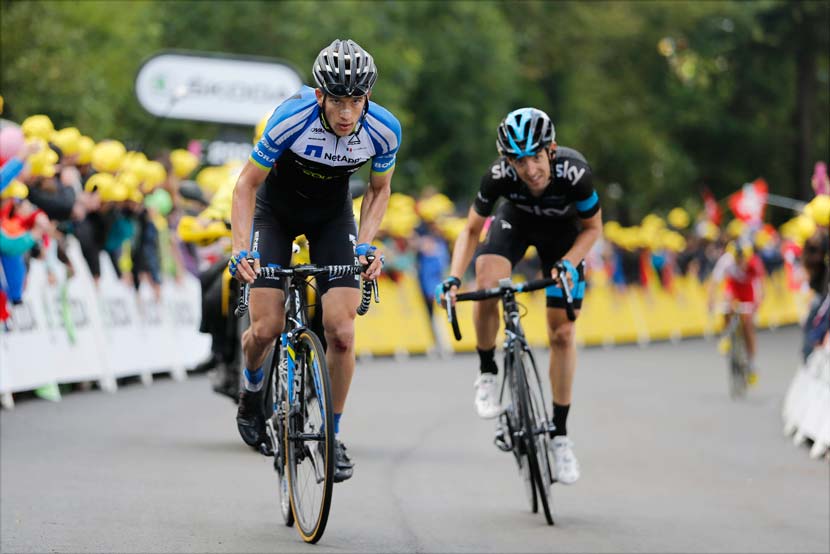 Leopold Konig: the future is bright…

In stage 13, we saw an impressive ride from NetApp-Endura’s GC man, Leopold Konig, the Czech who is riding his first Tour de France as part of the German wild-card team. The 26-year-old won a stage of the Vuelta a España in 2013 and finished ninth overall. Now the hope is for a top-10 in Le Tour.

He was third in the stage to Chamrousse, finishing just 11 seconds behind stage winner and race leader Vincenzo Nibali and with that Konig moved up the rankings from 19th to 10th. 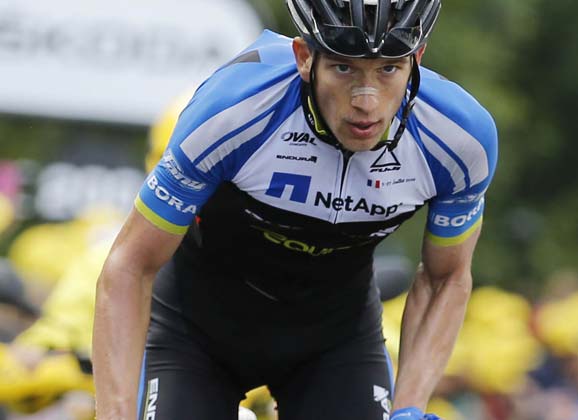 At the mid-way mark of stage 14, we saw his team-mates join Astana at the front of the bunch as it make its way up the early slopes of the Col d’Izouard and it’s clear that the climber is keen to try and back up his performance from the first day in the Alps.

When NetApp-Endura began its chase, the deficit of the peloton to the escapees was around four minutes. By the team they moved aside to let Astana continue with the pacesetting, the advantage had dwindled to 2:30.

Before the start of the stage from Grenoble to Risoul, I spoke to team manager Enrico Poitschke about Konig. “He’s had problems with his back and knee,” said the German manager about Konig, “and he has to rest himself. He has a special body but it’s also a little fragile. He’s not a rider we can just push and push and push. That’s why it’s not easy to say that he’s on par with the other GC riders.”

Still, there’s enough talent in the legs of Konig for him to find himself ahead of other team leaders with a little over a week to go in the Tour of 2014.

“In this Tour, I think a place in the first six [of GC] is possible if, of course, everything works perfectly – if he stays healthy and doesn’t crash. For the future, much more is possible.”

The team announced a new sponsor for 2015 on the first rest day of the Tour. Bora signed a five-year deal with the team but it’s not yet certain if Konig will be part of the line-up in the future. “His contract finishes this year,” said Poitschke.

After what Konig showed in stage 13, it’s likely that some other teams will be sniffing around and considering if there’s a place in their line-up for a relatively young rider who seems to have a bright future, but the hope is that the soon-to-be Bora will continue to nurture his obvious talents.

“We are still talking to Leo and we would like to have in our team for the future but nothing has been decided as yet.”

The dark blue jerseys from NetApp-Endura continued to hold good position in the peloton when AG2R La Mondiale moved to the front in the final kilometres of the Izoard and, at the time of writing, we wait to see what Konig is capable of in the finale of the anticipated race to Risoul.

So, in the appraisal of Poitschke, what is possible for the stage? “I think that the climbs should serve him well. We go up to 2,360 metres – that’s a special sort of terrain. Some riders react differently [to altitude] but Leo feels good up high and we made sure that we had done some altitude training in Sierra Nevada before the Tour. I think it’s a very good climb for him in the final and… we will try. The goal for the team is to win a stage.”

We wait to see what unfolds… in the stage and for the rest of Konig’s career.