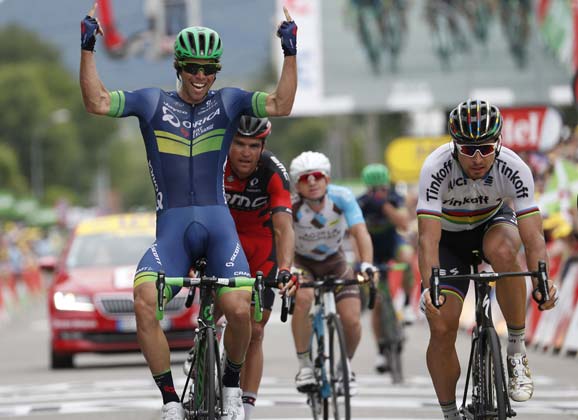 Matthews finishes off the job: stage winner in Revel

It would be wrong to say that winning a stage of the Tour de France is inevitable but if you’ve followed the progression of Michael Matthews’ career, it should come as no surprise that he’s done what he did today in Revel. He became the 11th Australian to win a stage… 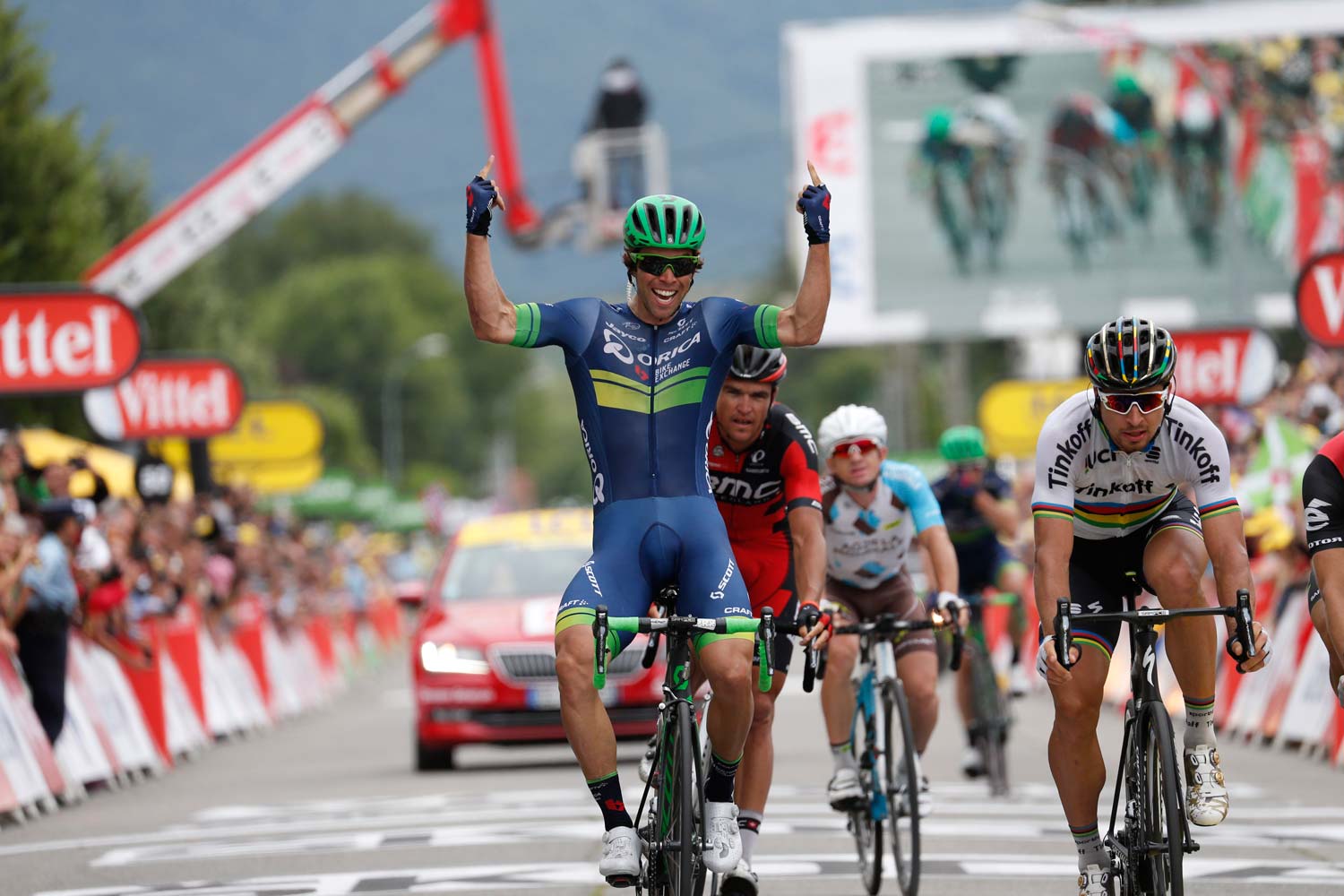 Beating Peter Sagan in a sprint is no easy task but Orica-BikeExchange’s versatile sprinter managed to do just that in Revel after a tactically brilliant finale by him and his team-mates. Michael Matthews has quite some history of success but against Sagan there’s one memorable loss: the world championships in Richmond last September.

In the USA late in 2015, the Slovakian got the jump on the Australian but in Revel the positions were reversed.

“Obviously me and Sagan, we go head-to-head in most races,” Matthews told RIDE in Revel. “In the Tour de Suisse, he got the better of me a few times so I knew in the final [today] he was the man to beat – for sure he was the strongest rider in the breakaway.

“He was pulling all day and never sat on. He gave it everything for the breakaway to stay away and that’s when I knew he had good legs.”

Sagan has won the green jersey each time he’s started the Tour. Four times in succession he has accumulated more points than any other rider. On the road from Andorra to Revel, he added another 55pts to his tally in 2016 and, thanks to his effort in stage 10, he’s back in green (again).

In the battle of Sagan vs Cavendish, it’s now 242 points to 204 in favour of the Slovakian.

In the ongoing contest between Sagan and Matthews, the Slovakian holds the upper hand but the Australian has edged a little closer. 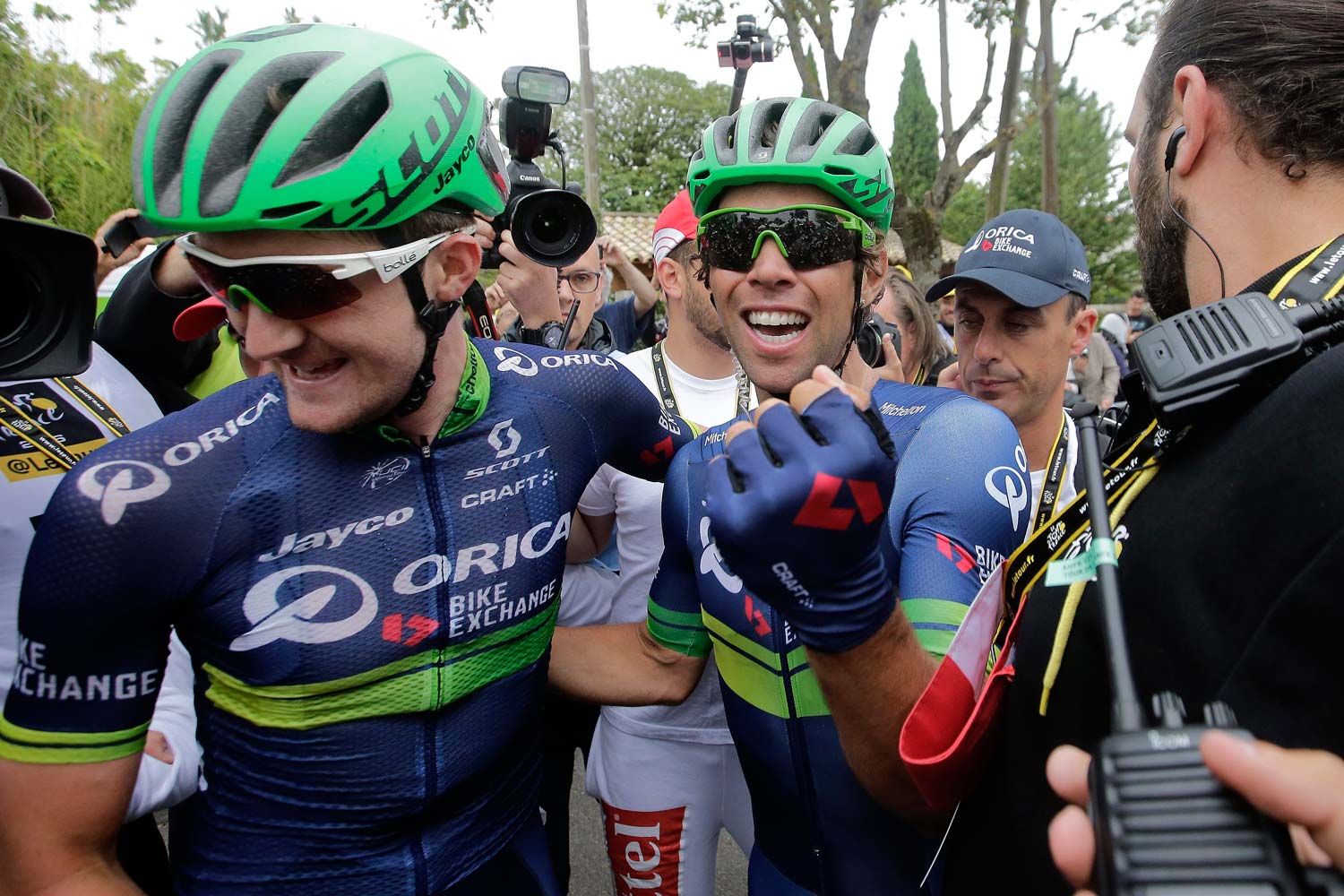 Luke Durbridge played a key role in earning the Orica-BikeExchange its first stage win in the Tour since 2013.
Photo: Graham Watson

With a trio from the Orica-BikeExchange team part of what became the winning break, Matthews had the advantage of numbers. He also knew which wheel to follow: as if glued to Sagan he shadowed the world champion throughout the final kilometres and never had to spend a moment in the wind.

“I was just hoping I had the legs to follow him,” continued Matthews about his rivalry with Sagan and how he managed to overcome the Slovakian in stage 10.

“Today it all came together and I had the legs to follow but it wouldn’t have been possible without my team-mates. They rode the perfect race and it’s really nice to get one over him.

“He’s got a lot over me now, especially with the world champ’s jersey and it’s nice to get one back.” 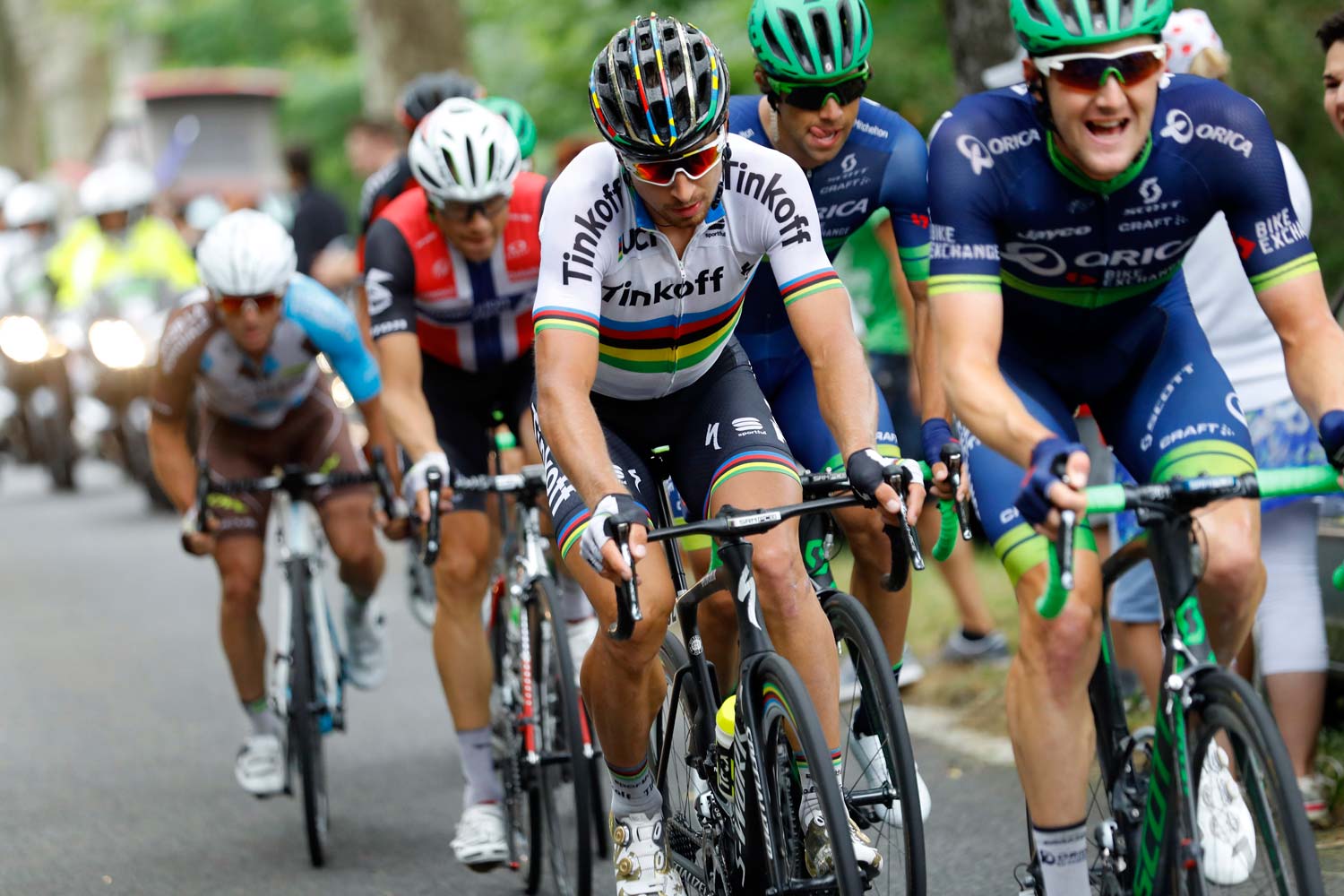 Durbridge on the front while Matthews keeps a close eye on Sagan…
Photo: Graham Watson

The showdown would end up being between five riders: four of them previous stage winners in the Tour de France – Sagan, Edvald Boasson Hagen, Greg Van Avermaet and Samuel Dumoulin. But Matthews has now joined that club.

When the sprint began, there was a moment when The Inevitable appeared to be under threat. Down the right side of the road went Greg Van Avermaet and the surge of the six contesting the stage began. The sixth was Daryl Impey: the South African who wore the yellow jersey in 2013, a rider who has played a pivotal ride in the Australian team’s major accomplishments at Tours gone by.

But in Revel, Impey’s only consideration was doing all he could to ensure Matthews had the best possible chance of winning.

In the flurry of action inside the final 400 metres, Matthews got shunted back and found himself needing to work a way past the others, into the wind (at last) and onward to a fine salute.

It happened. He thought it would and, finally, without any injuries he did what he truly believed he could. Victory!

“This is my second Tour de France but it’s meant to be my third,” he said moments after crossing the line ahead of Sagan and Edvald Boasson Hagen. And then he reminded everyone of the work that has gone into the win that was always meant to be. It was a reminder of July 2014 when he was part of the team presentation in Leeds but eventually forfeited his place, succumbing to injuries sustained in his final training ride before the Tour. But he never gave up believing.

“This win was three years in the making.”

He becomes the 11th Australian to win a stage of the Tour de France.

Welcome to the club Michael. You share good company. And it was a victory achieved in fine style with great support from his cohort.

“I wouldn’t have this stage win without Luke Durbridge and Daryl Impey with me in the break,” said Matthews. 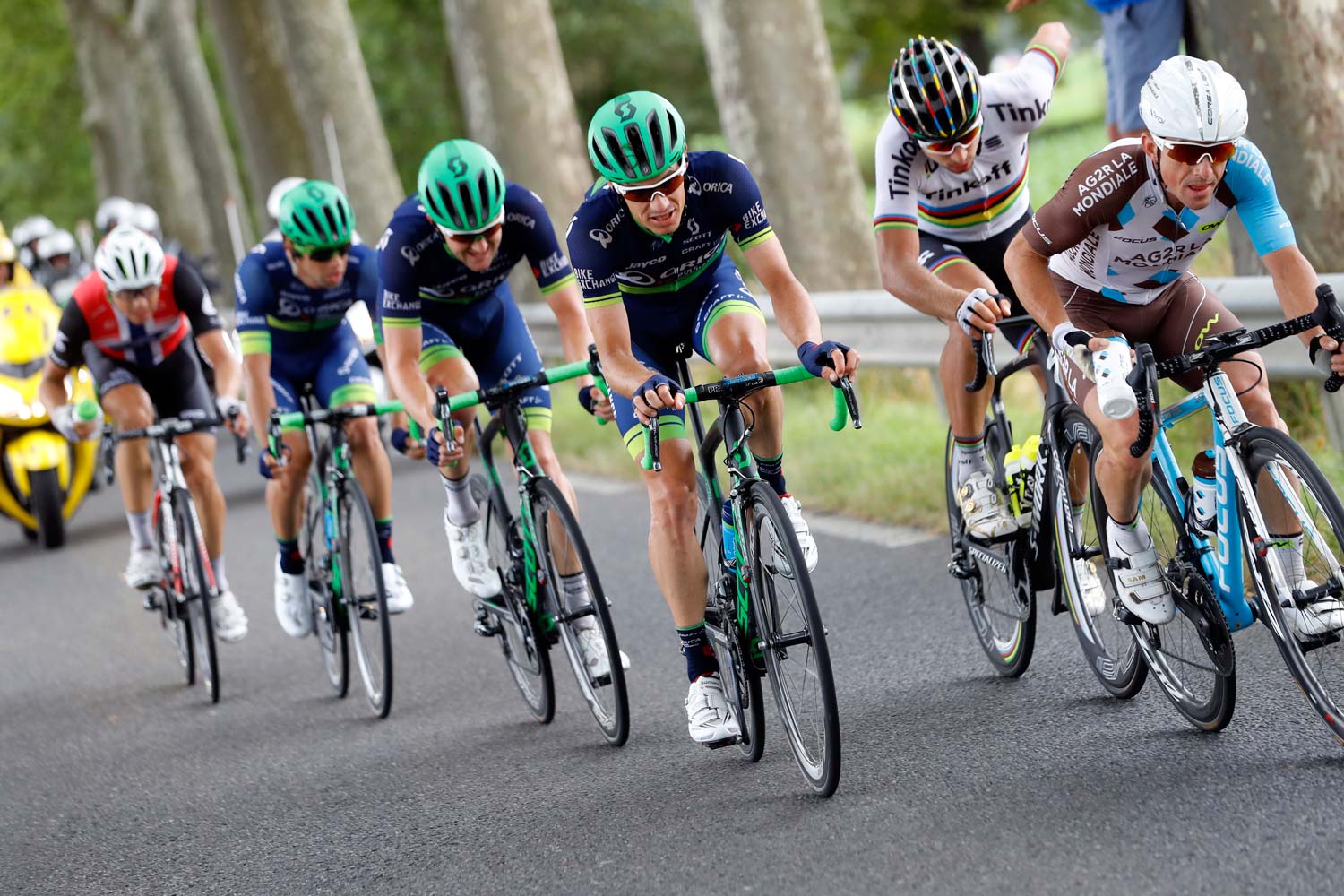 Daryl Impey ahead of Durbridge and Matthews… all for one. and one for all.
Photo: Graham Watson

The OBE trio were part of an impressive escape group that initially included the 2014 Tour champion, Vincenzo Nibali, but the Italian wouldn’t make the final selection after strong turns of pace on the road leading to Revel. It was Sagan who did the damage that time. With 25km to go, the world champion sifted the lead group from 15 down to seven.

Durbridge set a high tempo with Impey on his wheel and Matthews nearby – although, as he knew he had to do, always marking Sagan.

The final stanza began when Durbridge peeled off, job done – and then it was a battle of two against the rest: Impey doing all he could to exhaust the others and Matthews carefully controlling his emotions and energy.

Surge once, surge twice… Impey did what he had to do. And the others couldn’t afford to give him any leeway.

Daryl was working for Michael, but give him an inch and he can take a mile.

Sagan would chase him down. And he would attack again. And that’s how it went until the final kilometre. Then came the moment to prep began for the sprint.

Watch it again. Enjoy the ride. It was always going to happen and even when it seemed like it might be in doubt, Matthews found the answers and the energy to overcome his rivals.

The Tour has left the Pyrenees and Orica-BikeExchange retains second place on GC. And now, thanks to a quality team effort, it also has a stage win in the 103rd Tour. Take a bow. Breathe a sigh of relief. The job is done. Now, onward to whatever comes next.

Matthews knows there are many to thank for his victory but the most important is his wife, Katarina. Without her support and belief in his ability he may have succumbed to the belief that the Tour wasn’t a race for him.

“Last year, when I got to race, I crashed in stage three and broke four ribs,” he explained in Revel. “This year I’ve already crashed two times so I was almost giving up on this race.

“I was going to say, ‘Maybe the Tour de France just isn’t for me.’ I’ve just had so much bad luck in this race but yesterday on the rest day my wife and I had a really good talk. She really kept me motivated to keep pushing and I really dedicate this win to my wife… and my dog ‘Gigi’.”

The dog is new. The desire to win is not. And the love of his sport and his wife remains for Matthews on a day that the inevitable did happen.