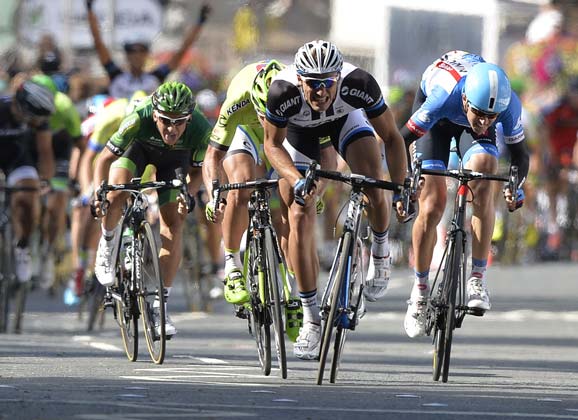 McEwen on the sprinters of Le Tour 101…

This is the second instalment of an interview with Robbie McEwen in which he discusses the strengths and weaknesses of a selection of sprinters in the 101st Tour de France. As is often the case with McEwen interviews, the dialogue is most verbatim and so we offer both the transcript of his exchange with Rob Arnold as well as a SoundCloud file… (this part of the conversation is from around the five-minute mark of the complete 30 minute interview).

(In part one, McEwen talks about commentary, cameras on bikes, and the use of power data…) 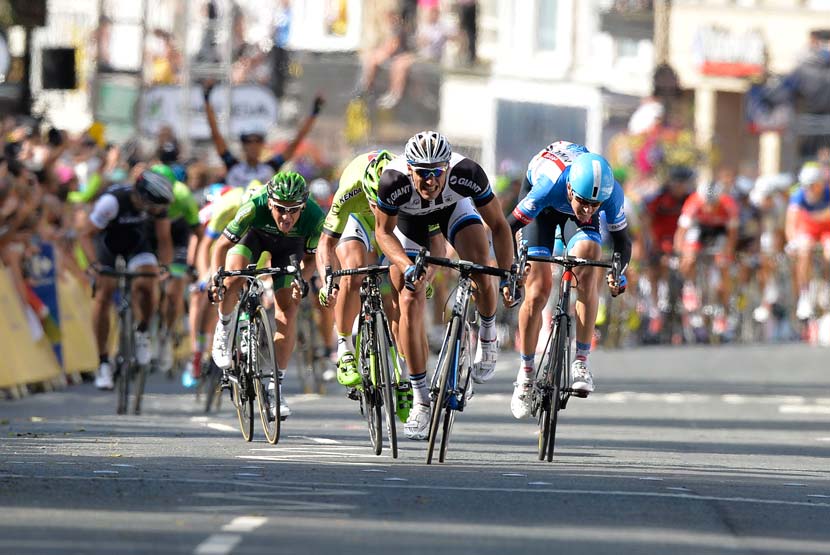 Marcel Kittel leads the charge to the line in stage one… what would be the first of his four victories in the 101st Tour.
Photo: Yuzuru Sunada

When we think about the Tour this year, there are a couple of guys who you really didn’t have much to do with: they sort of came through after your tenure in the peloton. Do you want to just go through a couple of the sprints that we saw this year and have a little comment about what you took home from [watching] them? And how you saw them?

“Well, I see Kittel as being the fastest man of the moment. Also, I think his team is highly under-rated. They do a great job and they’re so cool, calm and collected. And they wait until the absolute last possible minute to come through and take up the running at the front and do the lead-out. And I think that’s a great credit to the team and to the directors or their sprint coach.

“A guy who is a director there, Rudi Kemna, has played a big part in that over the years, in developing that sprint team.

“It doesn’t matter how long you ride on the front for leading up to the sprint, it’s about getting your sprinter in the best spot at the best time. And you’ve got to go late.

“Guys always overestimate themselves and one thing I learned from the Tour is that [Giant]-Shimano more often than not [is] getting it right.

“On that front, Lotto-[Belisol] really suffered without having [Greg] Henderson there. And Greipel really suffered whenever it got wet because he just seems to get the yips when it gets wet and just can’t find his way to the front. He really goes into panic mode.

“Of the sprinters, Kittel is the biggest, the strongest, the fastest – by far. As long as he’s still fresh, because after about half a dozen stages, he had the look of starting to get a bit tired and he missed, basically, his next two opportunities: stage six in to Reims, when Greipel won… finally – that was his big opportunity to win a stage and he grabbed it with both hands. But Kittel go out of position, got too far back, there were a number of roundabouts and he just couldn’t get himself back up there. And his team couldn’t get him there. That’s where he gets vulnerable, after a few days of racing – a couple of hard stages… it starts to affect him. He’s a big guy who needs a lot of power to propel himself and he just seemed to start getting tired.

“The next one was when Kristoff won in Nîmes: Kittel wasn’t there either.

“Where I’ve said Kittel starts to look a bit tired after a week, he came through again in the end – he won on the Champs-Elysées – but [after] that week of intense racing he seemed a bit flat. That’s when Kristoff comes into his own, when the course is a bit harder. If it’s rainy… he won that stage into St-Etienne, he won into Nîmes, and he went really close on that wet day into Lille – that was another tough, windy day… and when it’s wet and when it’s cold, that’s when those Norwegians guys [are good].

“Kristoff is a lot like Thor Hushovd – a lot like him. He comes into his own when it gets wet and cold and a little bit dangerous because he’s not afraid to take a risk. He’s getting better and better.” 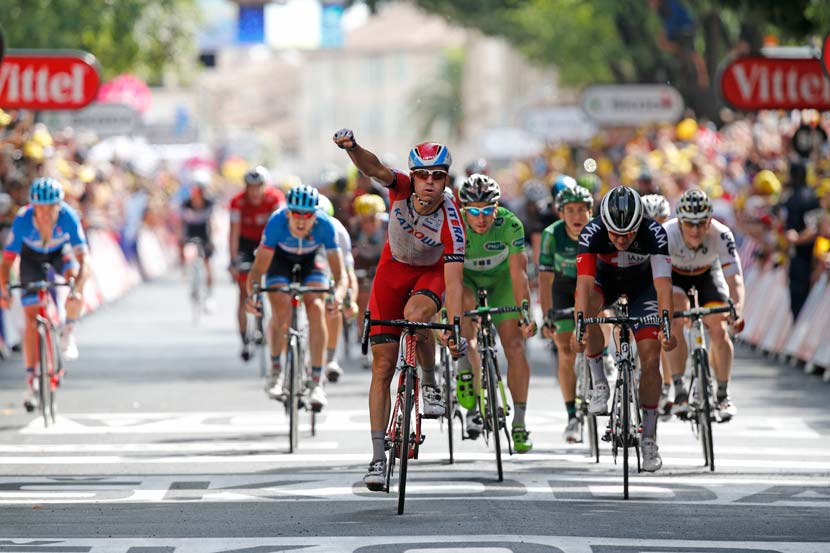 And Giant-Shimano has got options. When Kittel is down, [John] Degenkolb is there and you definitely know he’s coming because he’s got the most distinctive style with that head-bobbing Zabel-esque kinda look…

“Yep, you can’t miss his up-and-down style. I think that, if he could get that under control, he might be able to generate a little bit more power. If I was him, that’d be something I’d be looking at and trying to coach myself – or hone by technique – to take out some of that rodeo riding… but he’s strong all the same and I think he’s unlucky not to win a stage in the Tour as well. But he did some great work for Kittel.

“A sprinter who was there for a very short time was ‘Cav’ and he just made a huge mistake on that first day and put himself out of the race – and a couple of months of the season. That was, like he said, completely his own fault. But you can get really caught up in the moment and the massive adrenaline rush – and panic.

“I think that whole day got on top of him: finishing where it did and the ‘home’ town story and all this…”

And the Royals on hand… everything.

“He’d been preparing for it for a year and blah, blah, blah… and I think it all got on top of him and, all at once, he just made an absolute meal of it by riding – or bashing – into Gerro and taking them both out.”

…You’ve had instances when you’ve used your head and you’ve been very physical. When it’s happening, do you know that you’re doing the wrong thing and you’re just thinking, ‘Oh god…’ What’s going through your mind in an instance like that?

“The famous one was when Stuey and I were all over each other but that was also very calculated. If it’s not, you’re going to crash.

“If it’s just a simple, you know, smash into ’em, nine times out of 10, you’re going to come down. The other one time you might get very lucky.

“But if it’s more calculated – more like a balancing act than a violent act – you do you think to yourself, ‘I hope I can get away with it…’

“And you also hope that it gets looked upon and taken in the right context, I suppose… but almost 10 times out of 10, now especially, you do something like that [and] you’re going to get DQed anyway… I found that out. A couple of times.”

Cav didn’t get a warning but he was out of the race anyway. But the commissaires didn’t say anything about it. Do you find that odd?

And there was an instance when Kristoff won his first stage when someone got relegated… can you remind me who that was?

“…in St-Etienne, Matteo Trentin came off his line really hard to his left and baulked Degenkolb who was trying to come along the barriers. He said he didn’t know he was coming and it was a bit of a freaky move. Whether it was intentional or not…? I don’t even know if he saw him coming at that point but it was a big switch to the left and that will get you DQed because he really went hard off his line… that was Degenkolb’s big chance and the other one was when he finished behind someone when they stayed away… um, Navardauskas [stage 19] – he won solo.

“The big disappointment, of course, was [Peter] Sagan. A bunch of second places, he just… consistency killed him. And sometimes just being maybe too nervous, like attacking in finals when he really didn’t need to attack, he needed to defend and then sprint.

“He went away with Van Avermaet that day when Trentin ended up winning the stage and [Sagan] ran nowhere in the sprint. He should have wrapped them up easily.

“[At the Tour] Sagan was really good. He was incredibly strong he had so many consistently good performances on hard stages he was getting more and more tired.

“He had such a massive lead in green and he could have just wound it back slightly and just concentrated on at least a stage – and won it.

“Everyone sort of says, ‘Anti-climax… yeah, he won a green. No excitement there…’ He didn’t win a stage when he probably should have been able to win a couple.” 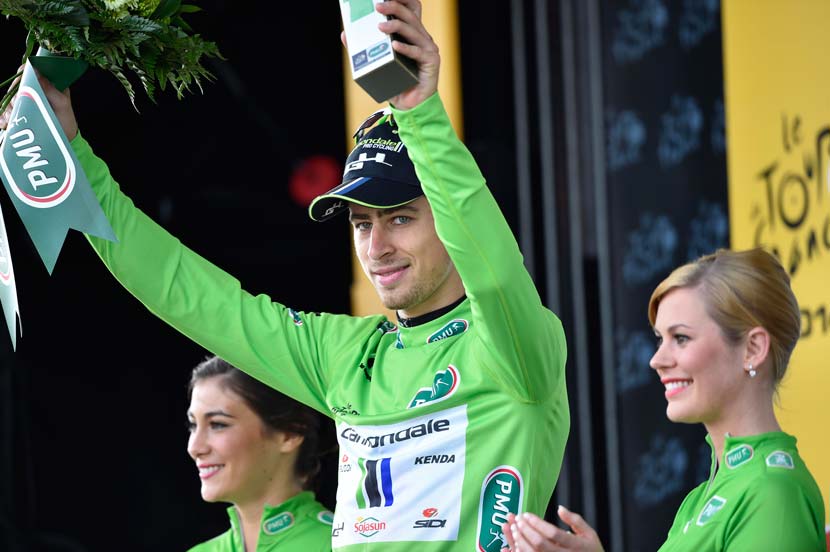 Peter Sagan would win the green jersey for the third successive year… but not a stage.
Photo: Yuzuru Sunada

It was almost like he was riding with an air of confidence. You know, the day into Sheffield for example, he was taking on everyone two or three or four kilometres out and he probably could have, like you said, waited and sprinted and he would have been able to cover that move by Nibali in the end…

“Yeah, when you’re defending you don’t attack. But [Sagan] was going off the front and pulling turns…

“If you’re defending, you’re defending: you follow, you shut stuff down… but he was opening things up! Of course then the other seized the opportunity to attack over the top: it’s obvious.

“And he said, ‘Oh, I feel like they’re riding against me…’ Yes, of course they are because you’re going to beat them in a sprint. And if he does get off the front, no one is going to ride with him because they know they’re beaten. It’s a very hard situation, you know you’ve got to ride defensively – give them nothing, take them nowhere and beat ’em in the sprint.”

– Note: The full interview can be heard but the rest of the transcription will be posted in the coming days…