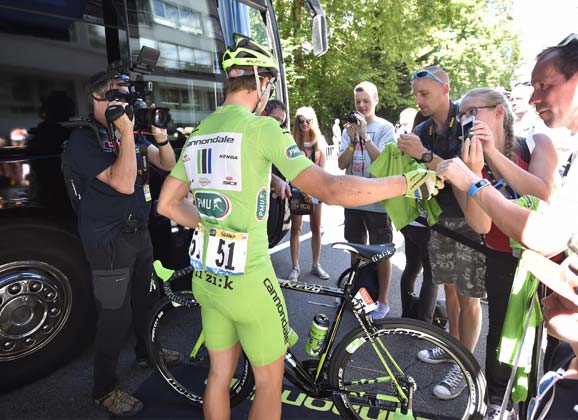 McEwen: “When you’ve been in it, you see the little things”

Last Friday we spoke to Robbie McEwen about a number of topics including cycling commentary, the sprinters at the 101st Tour de France, and his Gran Fondo this coming October. The SoundCloud file of the 30 minute discussion can be heard by clicking on the link (below) but here is another written instalment – ie. the transcript of McEwen’s thoughts on another triple green jersey winner, Peter Sagan… as well as a brief summary of his thoughts on some of the up-and-coming French sprinters.

This part of the transcript is from around the 17-minute mark. 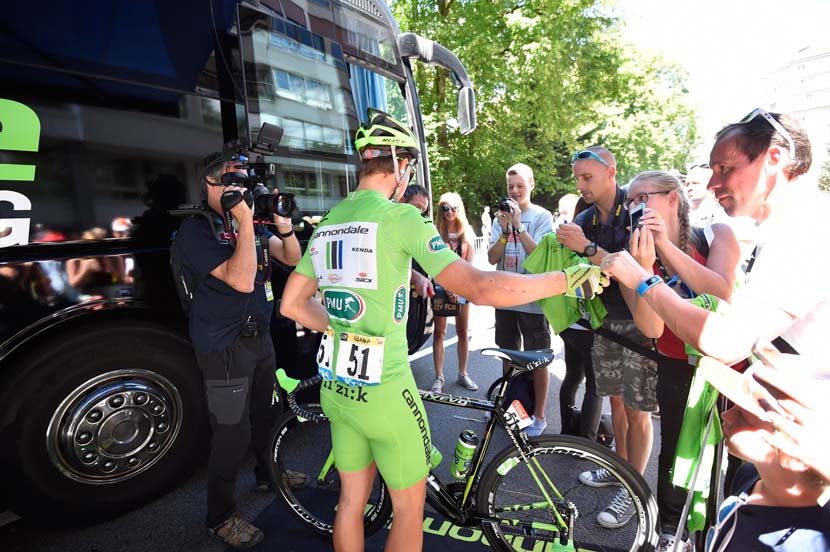 RIDE: Peter Sagan has become the talk of the transfer period. It looks like he’s going to end up and Tinkoff-Saxo (a rumour that was confirmed a few hours after this discussion took place). Is he a ‘sprinter’ or he going to turn into a GC rider? Where do you see his future…?

Robbie McEwen: “Classics rider. I think he’s had his fastest years as far as sprints go. He never was a pure sprinter, he was a guy who was so incredibly strong and talented – and he’s fresh at the end of a race – so he can sprint but he’s not a sprinter when you compare him to Cav, Kittel and some of the other really fast guys… but you put a couple of hills in there then he’s just untouchable. Those guys will be dropped and he’ll be there as the only quick guy.

“But he needs a really good team around him to make sure it stays together so he can beat the rest in a sprint.”

On that topic, [Sagan] has already matched your tally of green jersey [wins]. Is he just going to keep on picking them off…?

“Oh, he’ll probably triple my total in a few more years. If he keeps concentrating on green, he’ll win it year after year for as long as he rides the Tour.

“Although, when Cav was winning heaps of stages – and he got up to 25 Tour stages – we said, ‘Oh Cav’s never going to get beaten…’ and along comes Kittel. So the next superstar might be 18 at the moment and turn pro in two years and come and win his first green jersey in three and who knows… but at the moment there’s nobody currently in the bunch that looks like they can beat him for green.” 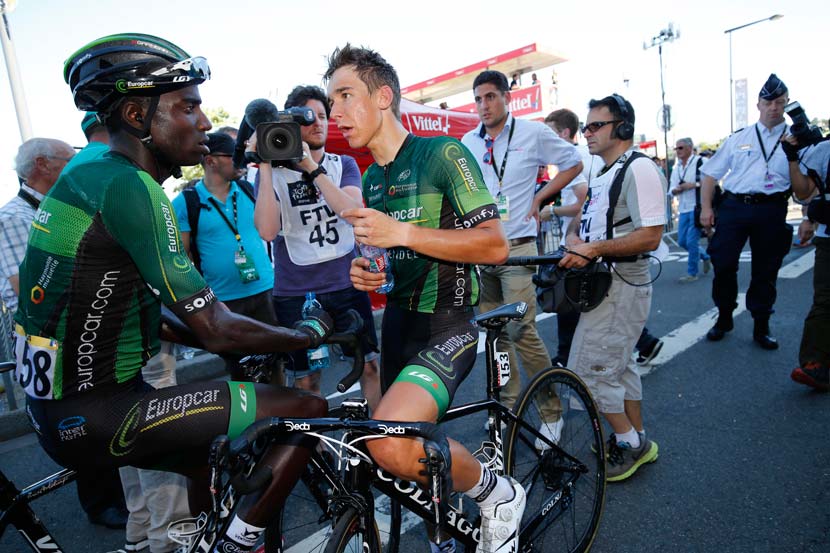 We’ve covered a lot of them, but can we just [talk briefly] about the two French sprinters Arnaud Démare and Bryan Coquard? I really enjoy the style of Coquard, do you have any comment on him?

“I think he’s fast. He’s naturally quick, coming from his track background. I think he just needs to get tougher and develop a bit more horsepower.”

But he’s definitely confident. He doesn’t mind taking them on…

“He is only a small guy. He should be able to excel in sprints that are slightly uphill because of his low weight. He’s there and thereabouts, but he’s got to get consistent. He just needs more HP.

“He’s got to really work on getting stronger which he will with seasons in the bunch.

“He’s got to maintain that speed which he’s got naturally but try and build up more grunt.”

“Démare? Disappointing. I thought FDJ should have taken [Nacer] Bouhanni to the Tour personally.

“Démare is more of a guy who, when it’s hard – it’s a bit lumpy… there were stages in the Tour that should have suited him but he just kept falling off. I think he lost a lot of confidence. When he was there, he was getting boxed in.

“From what I saw, I think he had one good finish where he came through fast in Lille, where Kittel won – where he just caught Kristoff on the line… and I think Démare came through and took third and Coquard was fourth, or something like that.

“He did a fast sprint and everyone was like, ‘Oh, did you see Démare? He rode the fastest sprint. His sprint was faster than Kittel’s…’ but people don’t see the detail: Kittel went and sort of tucked in behind Kristoff in the slipstream for a second, paused, and went again. And that make it look like Démare was making up massive ground on Kittel but only because Kittel said, ‘Right, I’ll just slipstream for a second, take a breath, and then go again…’ and he won comfortably.

“Démare was alright there [in Lille] but, for the rest: disappointing.”

Going back to the original topic [talking about talking about cycling], the way you’ve been able to reel off those facts, it’s clear that you take in a lot. You told me [before going on the record] that you didn’t watch a lot of the Tour but that you made sure you were [in front of the television] for the last five kilometres of most stages… your recall on it is amazing. Have you taped it and gone over it or have you just watched it on the day and remembered it…?

“Just watch it once. Well, I mean I watch the sprint itself and then they show the replay maybe eight times. I watch the replays, watch the helicopter shot and then I know enough. I can see who is doing what, and what happens.”

You’re still living it like you’re racing and you’re looking at your ‘rivals’ aren’t you?

“I think any professional sportsperson does that. When you’ve been in it, you see the details – you see the little things.

“It would be like me sitting and watching the PGA championship and an ex-professional golfer watching it; you see different things. I’d see them hit [the ball] and go, ‘Wow, he can hit it a long way and he can hit it where he wants…’ and the others are looking at little tiny things: the backswing and the club face… and stuff I can’t even notice.

“It’s the same thing with cycling: I see the details.”