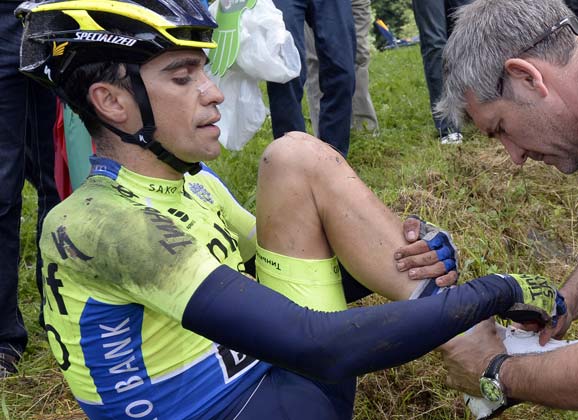 With about 94km to go in the 10th stage of the 101st Tour de France, the two-time champion, Alberto Contador landed with a thud on the ground. He would later discover that his tibia was broken in the incident but that didn’t mean he’d surrender and quit the race immediately. As one of the favourites for the overall title, he got himself bandaged up, switched shoes and got back on the bike.

Eighteen kilometres later, the Spaniard would put his arm around his Australian team-mate, Mick Rogers, and apologise. “‘Sorry,” he said, “I can’t keep going.” And with that, Contador unclipped from his pedals, stepped off his bike and quit the Tour de France. His race was over. 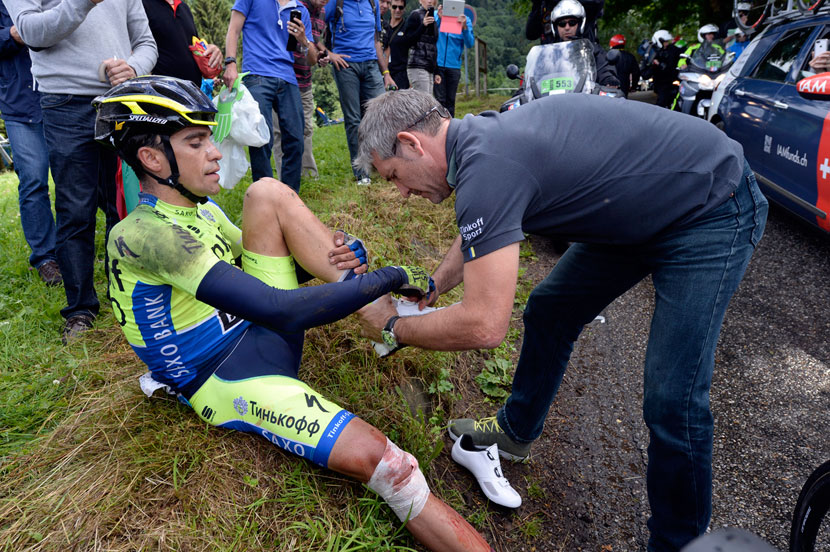 Alberto Contador gets a new set of shoes off his team’s mechanic, Faustino Munoz, after being patched up by the Tour’s medico… he would ride another four kilometres before quitting the race with a broken tibia.
Photo: Graham Watson

RIDE spoke to Rogers a few hours after he finished 105th in the stage to La Planche des Belles Filles and the veteran talked us through what he admits was a very emotional moment for him and his team.

“It certainly wasn’t supposed to end this way,” said Rogers about the incident that forced the rider who had been ranked ninth on GC out of the race. “We had so much planned for the stage today but unfortunately a split second can change everything.”

Rogers was following his leader on the rapid descent and he admits to witnessing the crash. “I was about five or six positions back and he just fell,” he explained. “I think he might have hit a small pothole or a rock. The road was wet and he just slipped and went straight down onto the ground.

“We stopped straight away and could see he was in agony. He was struggling to have an understanding of where he was.

“I don’t know if he hit his head but he seemed a bit far from… well, not it’s not that he was unconscious – he knew where he was – but he still wasn’t 100 per cent as it is when you hit the ground at 80 kilometres an hour.”

Contador has been known to take daring risks on descents so, in Rogers’ appraisal, was he doing anything extraordinary at the time of the accident? “No. It was just a straight section of road and that’s why it’s just so peculiar. He just hit something and lost his handlebars and, before we knew it, he was on the ground the poor guy.

“We were going fast but it was straight.”

It took around five minutes for the medicos to patch up Contador enough for him to get riding again. And in that time there was an obvious truce in the peloton that contained the rider in the yellow jersey and other favourites for the title, but the race was still being contested up front with Michal Kwiatowski becoming the virtual leader.

There was hesitation and confusion. Rogers explained how he and his team managed things before it was confirmed that Contador could not continue: “We took a decision that we’d leave a few guys with him – the majority of the team – and then prepare for later on. Rafa [Majka] and myself, we started to ride and at least put someone in between Alberto and the group so that the guys could get Alberto to us and then we could hopefully bridge back to the group.

“There was no point in us all staying there and waiting.

“But by the time he got to us, I could really see that he didn’t have his trademark dancing pedalling style.

“He was in pain. And we now know that he’s broken his tibia… that’s why he was in agony the poor guy. He was just a hero to get up and pedal with a broken tibia.”

There was a key moment when Contador put his arm around Rogers and it was clear that a decision had been made and that he’d have to abandon. What words were exchanged in that time? “He was apologetic,” said Rogers. “He was like, ‘Sorry, I can’t keep going.’

“I said, ‘Alberto, you’ve done nothing but make us proud.’

“It’s tough stuff. It was a pretty touching moment for the whole team… I’m choking up now just thinking about it,” said Rogers, clearly holding back tears as he spoke.

What happens next is anyone’s guess and, for the interim – with the first rest day awaiting the peloton – I asked how the team expects to manage the remainder of the race. What is the team policy going to be? “I don’t know. We haven’t even thought that far yet. We’re still dealing with what we have in our hands at the moment.

“I don’t think it’s good to make a decision right now. I think we should have a night to sleep on it and regather.

“Of course we’re going to regather. ‘Quitting’ and ‘giving up’ isn’t in our vocabulary so we’re not going to do that. We’re going to soldier on but in what fashion and what the plan is, it’s too early to speculate.”

The race resumes on Wednesday without any former champions in the peloton. Last year’s winner, Chris Froome, abandoned in stage five. The leader of the Tinkoff-Saxo team is gone. The race resumes but it’s a different contest now.