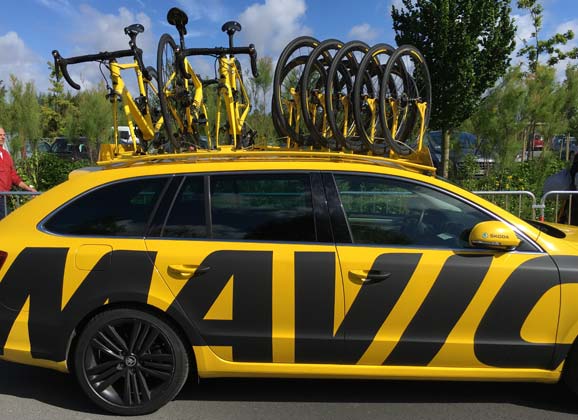 Rarely does the need arise for a rider in the Tour de France to call for a spare bike from the neutral service car but today, on the road to Chalet Reynard in stage 12, it happened. Chris Froome was left stranded after an accident in the closing kilometres. His bike was ruined by a crash into the back of a television motorcycle and he had to take action.

Quick thinking and desperation saw him toss his broken bike to the right side of the road and start running.

If it wasn’t so stupid, it would be great slapstick.

The leader of the world’s biggest bike race running up one of the most revered mountains in the sport without a bike is a scene that will be replayed for a long time yet to come. 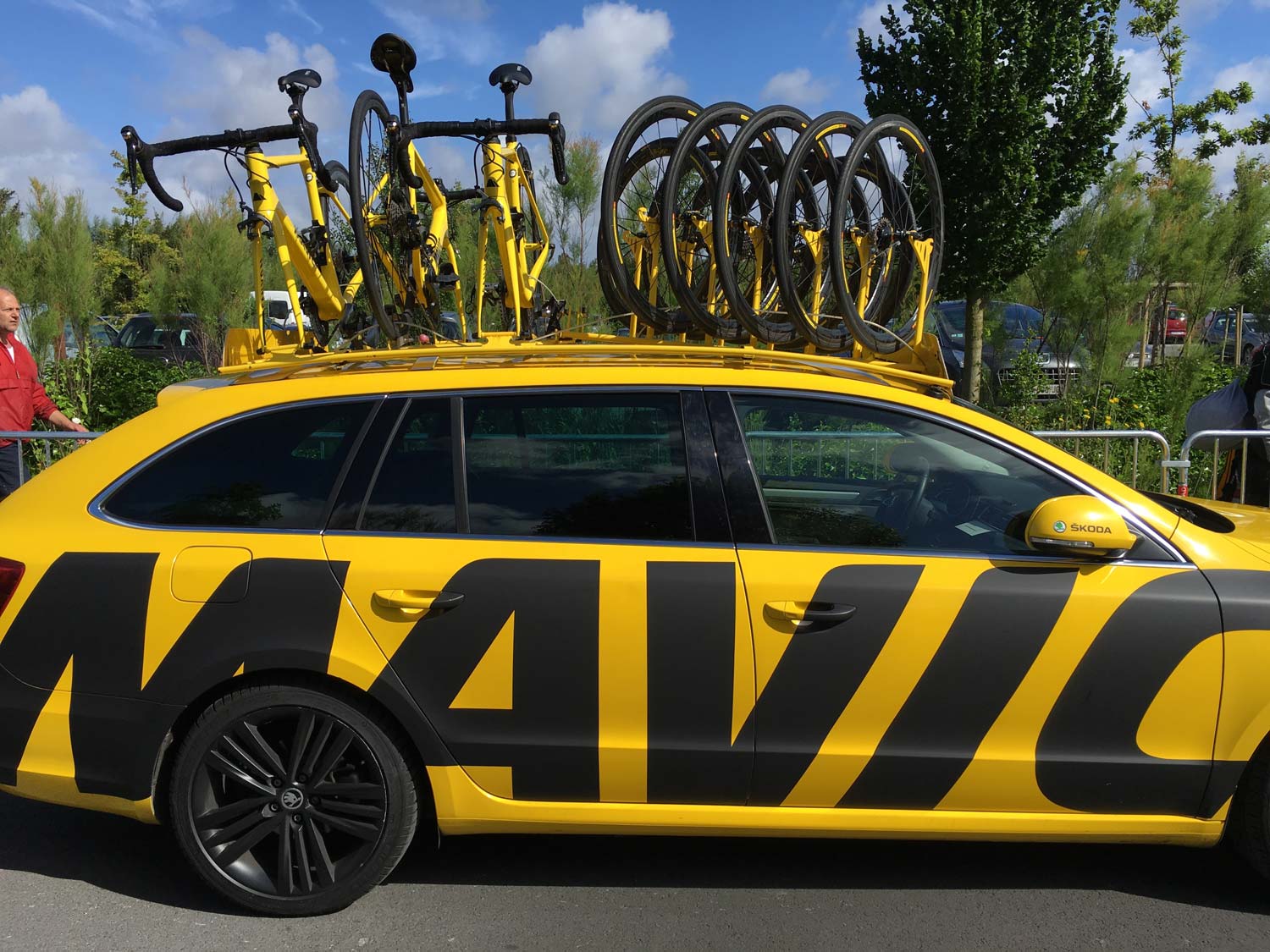 Chris Froome eventually succumbed to running in cleats and called on the Mavic support car. He wasn’t going to run to the finish. He needed a bike. And eventually he was handed one.

A yellow Canyon, one of the bikes that sit atop the neutral service cars for the duration of the Tour, was given to Chris Froome.

And that’s when the Tour became a farce: Froome appeared clumsy as he tried to clip his cleats into the pedals of a strange bike.

He races with Shimano pedals (and cleats) and so too do the majority of riders in the Tour.

Curiously, of the three pedal options on the neutral spares bikes, there is nothing from Shimano. 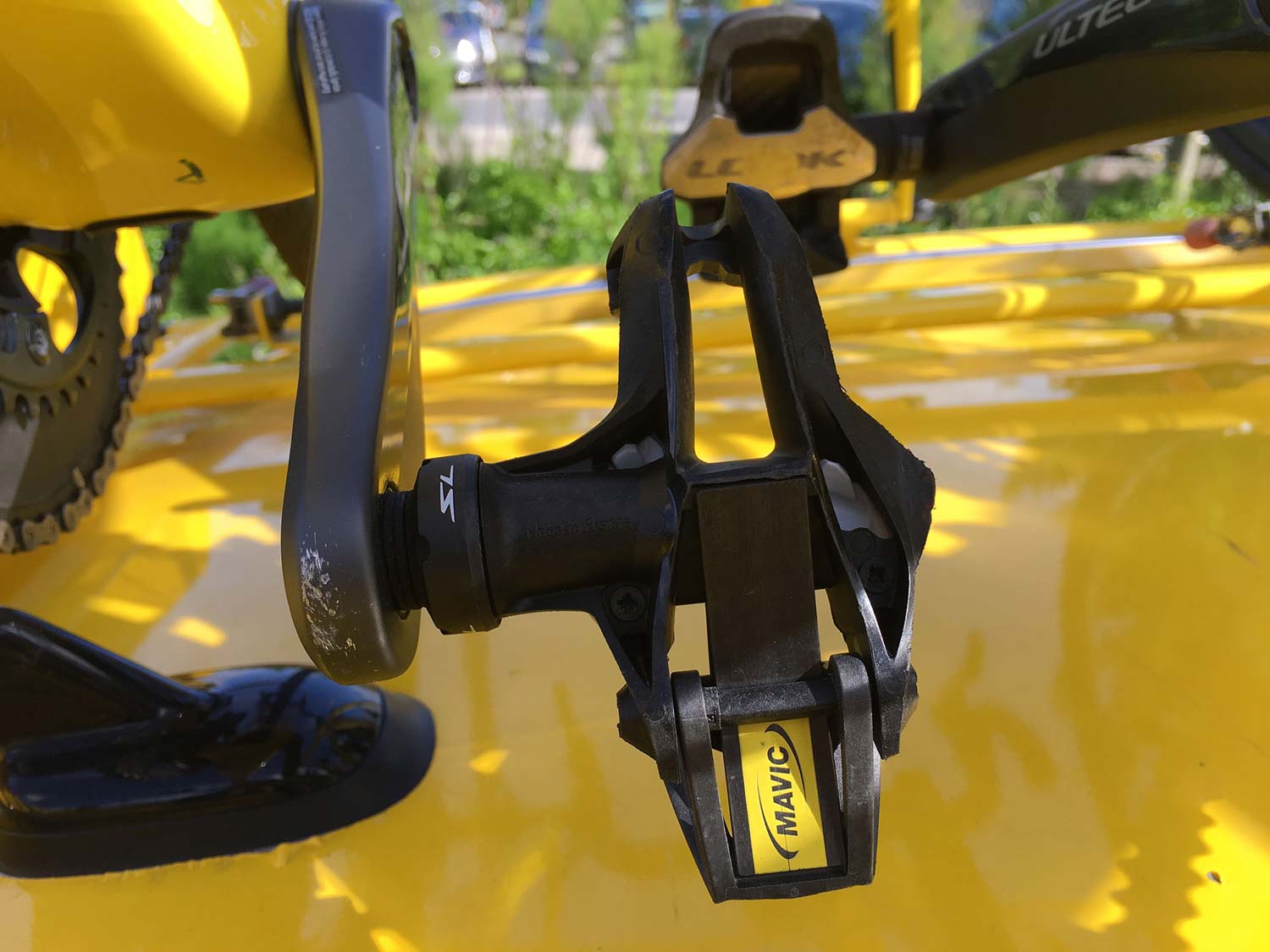 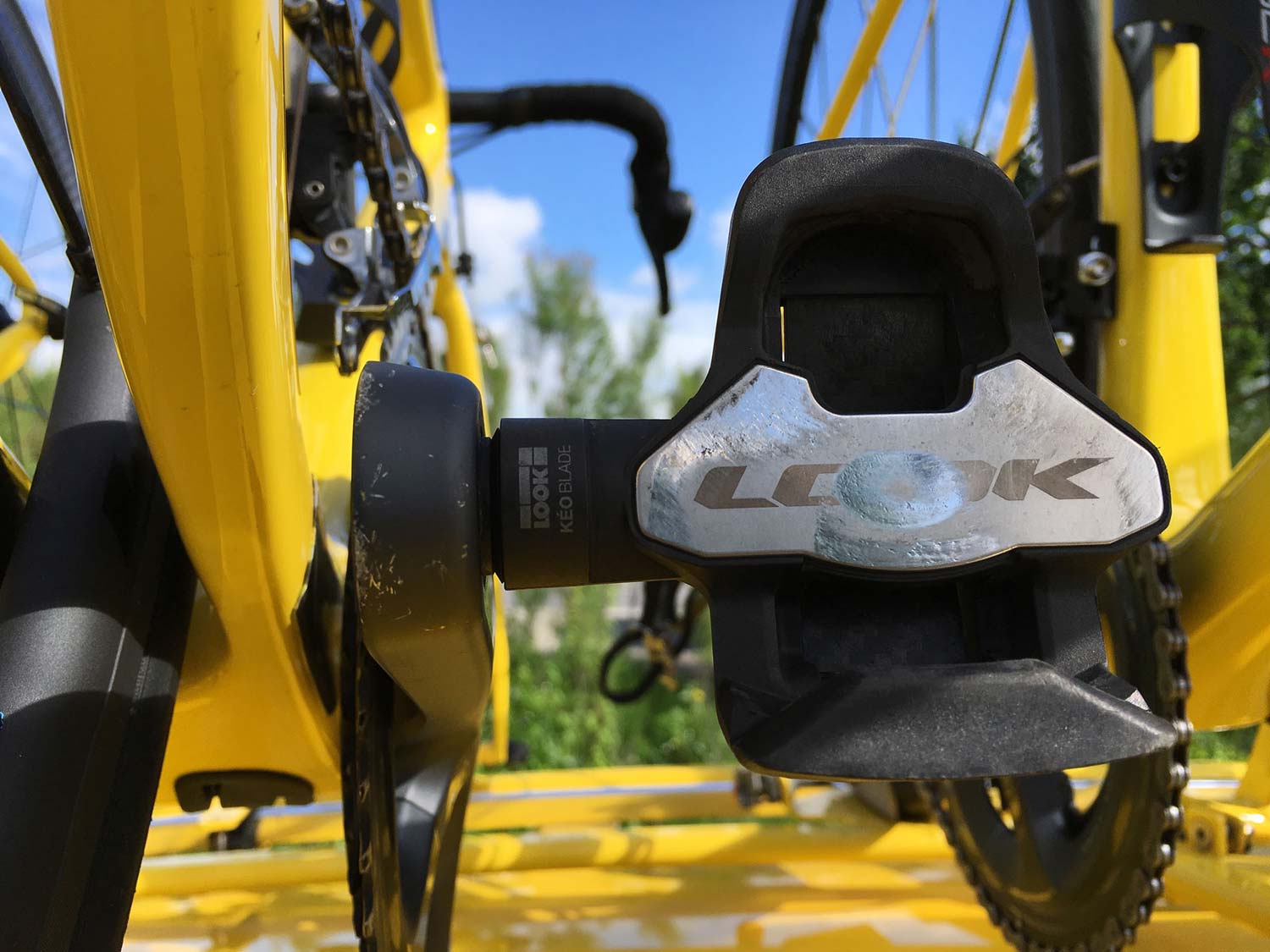 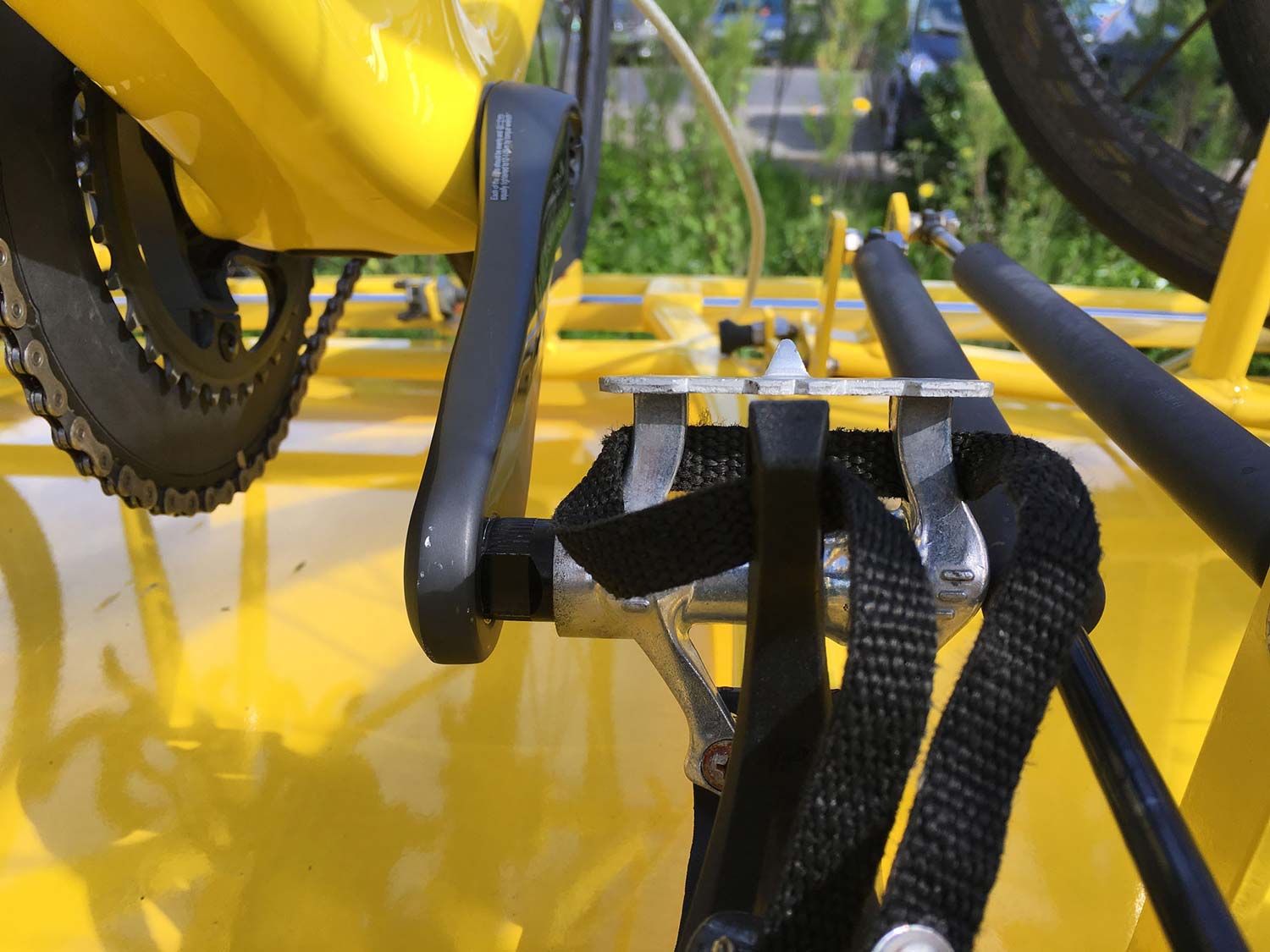 Before the start of the 2016 Tour, we photographed the pedal options and discovered Mavic branded pedals, an option from Look and, finally, toe-straps.

A spokesman for the neutral spares team confirmed shortly after the 12th stage, that the bike handed to Froome was fitted with platform pedals – ie. no cleat system, no straps… but, evidently, no way for the rider to pedal properly.

Despite the claims from the Mavic team, the images would suggest that the pedals on the yellow Canyon bike are the ones branded as ‘Mavic’ (which very much seems like a Time cleat configuration). So, to make matters worse, there are now claims and counter-claims being made about the nature of the neutral service.

It seems archaic. In an era when bikes are fitted with cameras and GPS devices and live footage can be captured and broadcast around the world from riders’ bikes, the neutral service vehicles aren’t able to… ah, service the riders.

Froome fumbled along for a few hundred metres, trying to come to terms with an incompatible product but eventually stepped off the redundant spare bike and set it aside (with surprising grace) and waited for his team’s mechanic, Gary Blem, to rush out of the Team Sky car and provide him with a functioning, compatible Pinarello bike.

Amidst the crowds and mayhem the bike swaps cost Froome significant time.

At the time of writing*, the defending Tour champion dropped from first overall to sixth. (Perhaps the commissaires will consider the situation and make a ruling that changes the result – but don’t hold your breath. It seems as though the time gains and losses will remain.)

Adam Yates of Orica-BikeExchange has claimed his first yellow jersey. He leads Bauke Mollema by nine seconds, Nairo Quintana by 14″, Romain Bardet by 28″, Alejandro Valverde by 52″… and Froome by 53″.

The Tour is not meant to be a comedy. It is not slapstick. It’s an event that attracts some of the best athletes in the world and millions of dollars worth of investment. But today, on what was meant to be a celebrated stage to Mont Ventoux, we saw a sequence of events that makes you shake your head in wonder. How did it come to this?

A good rider is leading the GC but the best rider in the race to date has been forced to hand over the yellow jersey after an incident that should have been avoided.

The administrators of cycling have a lot to consider but when this sort of thing unfolds in a race of this stature, questions have to be asked.

Can the riders be left to race without interruption?

*Note: after a review of the situation by the race commissaires, the standings were altered and Chris Froome retains the yellow jersey.

Froome will be the last rider to start the time trial of stage 13.

The top order of general classification, after the review, is as shown (below). 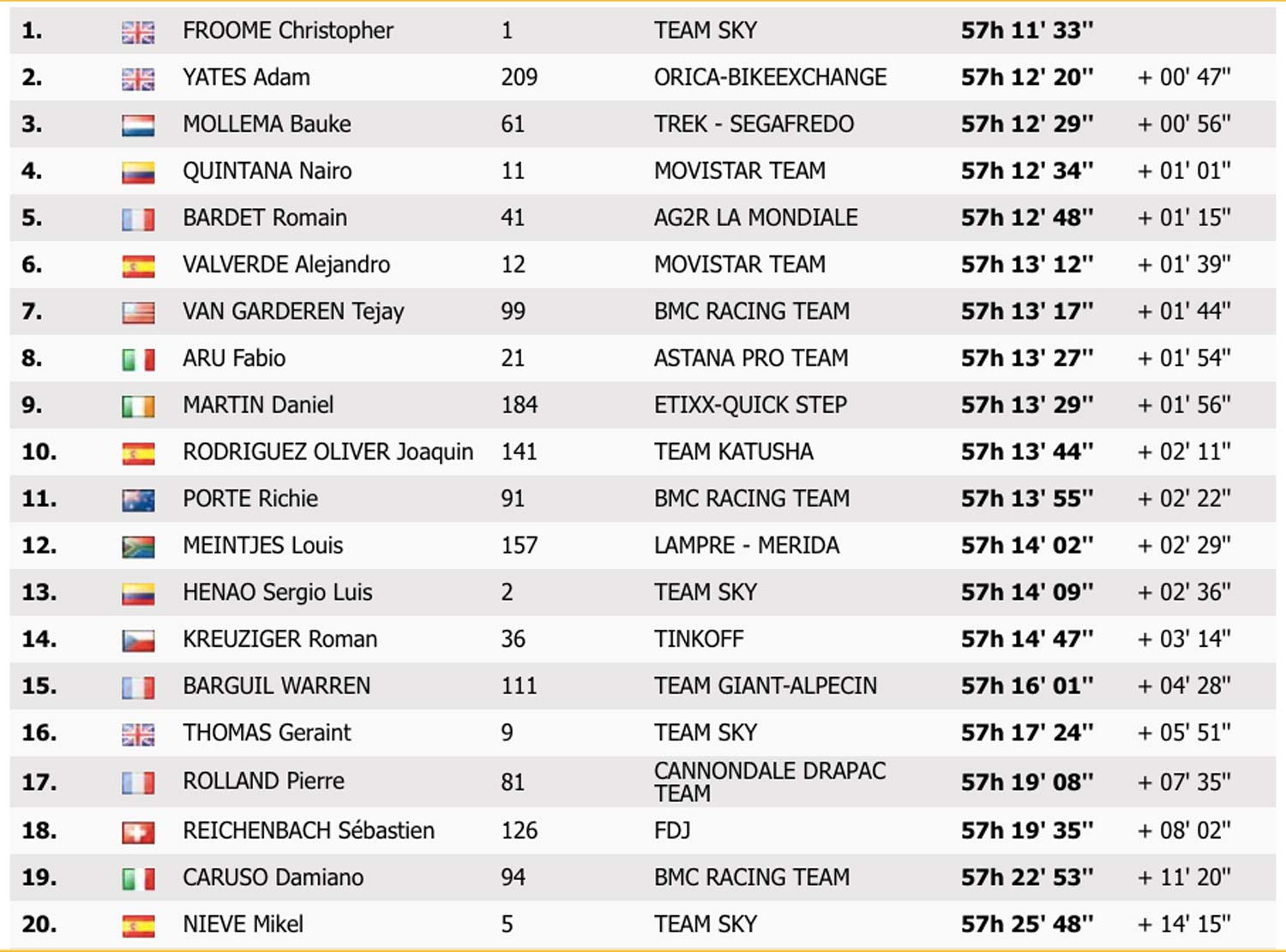