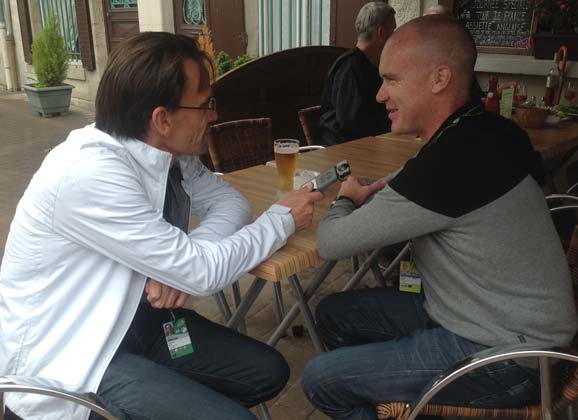 O’Grady and his 18th Tour… back as a spectator

It was a chance meeting: two Aussies in a café/bar that was on the route of the seventh stage of the 2014 Tour de France from Epernay to Nancy: two blokes who began their Tour careers in the same year. Stuart O’Grady and I found ourselves following the race yet again: a publisher and a former cyclist in the same place at the same time by pure coincidence. 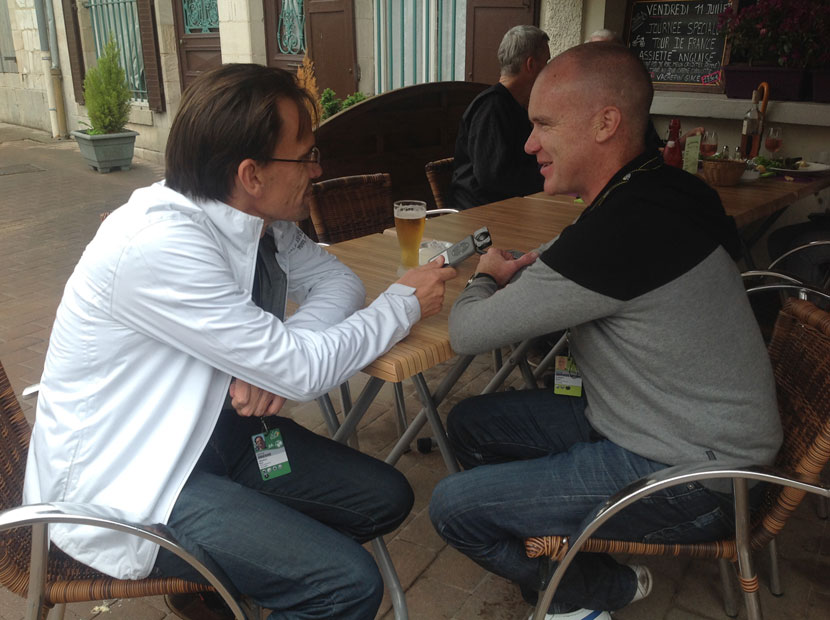 Rob Arnold and Stuart O’Grady in Tilloy-en-Bellay on the day of a chance reunion…
Photo: John Thompson-Mills

Many topics that could have been raised in a discussion that was long overdue but we had limited time. Our car was parked beside the road after telling an attendant gendarme we were “just going to grab a quick coffee…”. Little did we know that Mr O’Grady would be standing at the bar grabbing a beer for a few mates who he is travelling with (and one for himself) as he makes his way around France, seeing the Tour from a different perspective for the first time in 17 years.

Although we’ve known each other a long time, it was our first encounter since stage four of Le Tour in 2013 when O’Grady was part of the winning Orica-GreenEdge line-up for the TTT in Nice. That was a great day. There have been many interesting ones since.

Yes, there are topics that require much greater discussion than the time allowed but still – ever the professional(s) – we put our first chat in 2014 on the record and covered a few basics.

The time will come to cover other points that ought to be raised but, for the interim, here is a quick appraisal of what it’s like watching the Tour from an entirely different perspective as part of a rapid and impromptu Q&A in Tilloy-en-Bellay at the 45km mark of stage seven of Le Tour 101…

(You can find the audio file of the discussion on Soundcloud or by clicking the link below.)

Rob Arnold: Stuart O’Grady, I literally walked into a coffee shop to get a coffee and there you were standing right next time me. It must be quite a buzz just standing around and watching a race.

Stuart O’Grady: “Yeah, it has been. It’s really quite a surreal experience just to be on the other side of the barriers and see how the whole Tour de France runs from a completely [different] way to what I’ve ever seen.

“When you’re a rider, you’re just living in your little bubble… bus, race, bus, hotel, eat, sleep, eat – do it again. Groundhog Day. So it’s just been really interesting to be able to get amongst the people. Obviously it’s my first time driving the course and it’s just an incredible experience to be honest.”

Everyone says it’s dangerous riding the course but do you now have a bit of fear? Driving in front of the bunch can be a bit terrifying with tall the kids and the fans and so on.

“[When you’re] riding you’re always very vigilant of kids jumping out on the road and you’re always aware but when you’re driving it’s a whole new experience. Trying to overtake the breakaway, the other day – for the first time… god knows how many breakaways I’ve been in during the Tour and it’s quite easy but when you’ve got to overtake them… We came across the President of the Republic yesterday and we were beeping him out of the way. It’s a whole other ball game.

You made your debut at the Tour in 1997, the same year I first came over. I’ve seen it change a lot. It’s evolved enormously, hasn’t it? What strikes you as the biggest difference?

“I just think the magnitude of the race. The people are still here; there were this many people in France 20 years ago watching the stages but it’s when you go to places like Yorkshire… I mean, that was like the Olympics again. God knows the numbers that were there but there were millions and millions of people and that shows how the sport has become global.

“Obviously it has become big business now and there’s a lot more pressure on teams to perform and be in the breakaways… it really has gotten massive.”

I don’t want to talk about it right now because I’d rather explore it a bit further but I remember 1997 and we just talked about cycling and cycling only. And then what happened in 1998 changed all of that. People became accustomed to talking about doping. We can cover that topic another time [when we’re not waiting for the nod from police to continue the drive ahead of the peloton]. But it would be remiss of me if I publish a story about talking to you without raising that topic. People would say, ‘You are weak and you didn’t talk to Stu about the hard topics.’

It’s problematic for you now, isn’t it? It must influence the way that you appear in public.

“Yeah, kind of. Obviously. But that’s for me to deal with.

“I’m dealing with that in my own way.

“Everyone asks, ‘Oh, where have you been? You been hiding?’ No, I’ve been at home with my kids and wife absolutely loving being home…!

“I don’t want to be a directeur sportif on the road for 200 days a year. I’ve done this for 23 years and I’m loving being home, taking kids to school, taking my son to footy training, taking the girls to ballet… being a normal dad which is what I haven’t been for my entire parenthood. Now I really appreciate that and I’m really loving it.

“It’s hard to be here away from them.

“But I really think it was important to come back and see the Tour from another angle. I talk quite openly about what’s happened and I have done many lunches and many talks since… what happened, happened. I can’t change that.

“All I can try and do is make people understand the difference between back then and now.

“It’s difficult, but I’ve still got to try and walk around with my head held high.”

You’ve achieved a lot in sport and you’ve introduced a lot of people to cycling. I think that’s something that people are very familiar with and happy about. Even with the news that you launched last year which was a bombshell for a lot of people. Therefore it makes sense that you’d come here and talk about the Tour on 5AA.

What’s your feeling on the race after you’ve just come over the stage [that featured] the cobbles? You must feel a tinge of wish-I-was-there… or not?

“Absolutely not! Nah, seriously, I’ve been sitting at home in Adelaide watching the Giro, watching the Classics, doing my best with a glass of red on the couch trying to stay awake for Liège, you know?

“I love watching it, but I do no miss it for one nano-second.

“I see the pain those guys are going through and I watch the Giro and how hard that was. I see the guys here just absolutely getting smashed every day with stress. They did a stage in Yorkshire and it looked like they’d just ridden Liège-Bastogne-Liège and a couple of days later they’re in the mud of Paris-Roubaix… and I actually feel sorry for the guys. I really don’t miss it.

“I’ve had plenty of years to hurt myself and I think I got the best out of myself. Now I’m quite happy just to cruise around and be a spectator. It’s…

I said to you when I first saw you – because I’m used to seeing you in July when you’ve got sinew in your face – that you look like you’re getting younger. How has your body changed since you stepped off the bike?

“I haven’t whacked on any weight. Obviously I’m just lucky, I guess. But I don’t eat the same amount either. I’ve never been a big junk food sweet tooth, so I guess that’s one bonus. But I’m chasing around three kids and a dog and trying to keep my wife happy. That’s keeping me quite busy.

“I haven’t been on the bike at all. Zero… well, I went for one ride with my dad and my son on ANZAC Day along the beach…”

Were you pedalling squares?

“No, actually I was just cruising along. But it was my first ANZAC Day in Australia for years and I realise the importance of that day and it was just one of those moments… three generations on their bikes – it was quite emotional.”

…And with that I was advised by the gendarmerie: “Sir, your car is in the way. You must continue your drive to the finish.”