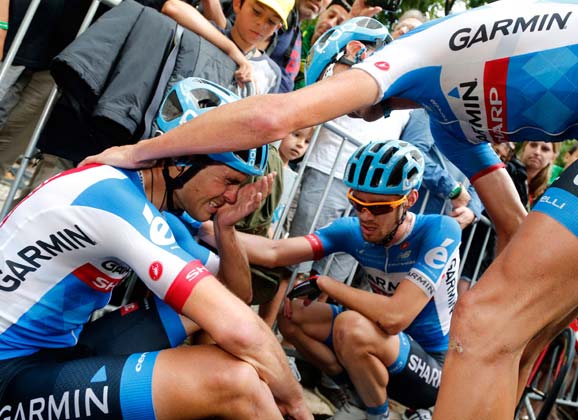 Okay, the names at the top of the result list tell us that it was “just another sprint stage”. Don’t believe it. The race from Tallard to Nîmes was a time trial, a bloody long one. And although Norwegians will be thrilled with the result – a fine second victory in the Tour de France for Alexander Kristoff – there will be hoarse voices all over New Zealand on Monday 21 July. 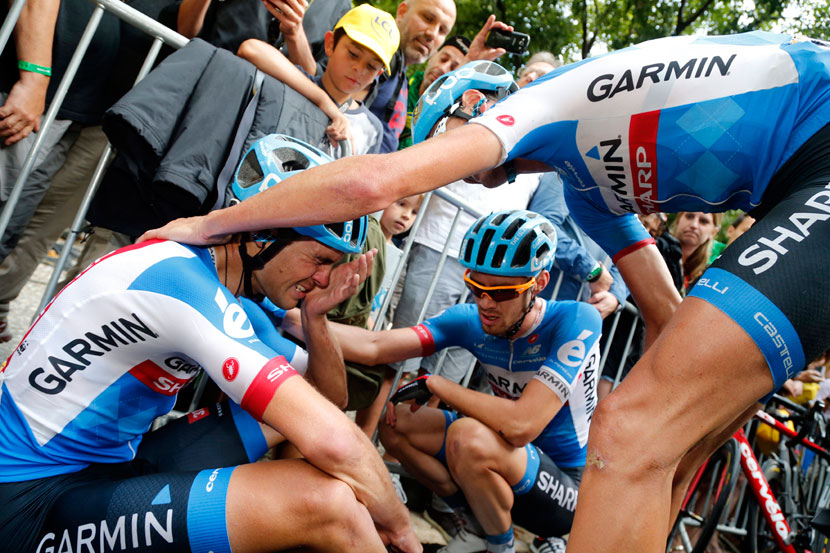 Admiration and consolution: Jack Bauer considers what could have been after he was gobbled up by the peloton in the final few metres of stage 15.
Photo: Graham Watson

Jack Bauer, you offered us all a reason to scream. So close, so very close but that damn line was just too far away!

Across oceans, in a land far away, early in the morning of a new day, people would have been yelling at their television. Begging, pleading, urging – Kiwi cycling fans were on the edge of their seats. When the sun comes up they can sweep up the fingernails. This was compelling racing at its finest.

Bugger what the number next to Bauer’s name says: 10th – that doesn’t matter. He was the real winner today.

Sprints run to a formula, we know how they unfold. In an era when we get to see inside the peloton and appreciate the push-and-shove that takes place thanks to on-bike cameras, and we understand the concept. It is complex and it is amazing. But once in a while one just wishes that The Escapees could hold on for 50 more metres.

‘Just another sprint’ can still be fun: a long line of team-mates working for another… strung out in a long line, all looking out for one another. A sequence. A train. They deliver a fast man to a place near the finish line and then, into the wind for a few metres goes the sprinter. Ideally he holds his line and holds off his challengers and then he throws a salute and gets the kisses.

Once the flowers are thrown into the crowd Kristoff will thank his team-mates as they deserved to be thanked. He will say how happy he is that all the good work paid off. And many will conclude: a good sprint – nice work.

There’s no doubt about that. But to see Jack Bauer do what he did, from the start of the stage to the end, makes smooth skin bubble and hair stand on end. Seriously man, how can it happen like that? He did everything right. He attacked early. He raced like it was a time trial: a perfect position from beginning to end. There was speed, strength, agility and class… it was all on display.

This is what makes cycling cool.

We sigh. And also salute the original aggressor: Mr Martin Elmiger, 16th. A white cross on a red skinsuit: the Swiss champion and an ideal escape companion.

Together they worked – cooperation right to the end. There was no room for tactics in the finale. No need for P&P to talk about cats and mice and all that usual schtuff. It was a mission for two men: let’s get there – all the way to the end bro!

They would reach the finish and that stupid result sheet will be archived to show that 69 guys finished in the same time. That’s how it will go down in history but thankfully there are images that are going to be revisited time and time and time again. This was a YouTube hit in the making. It was a brilliant display of resilience that didn’t net the appropriate reward. 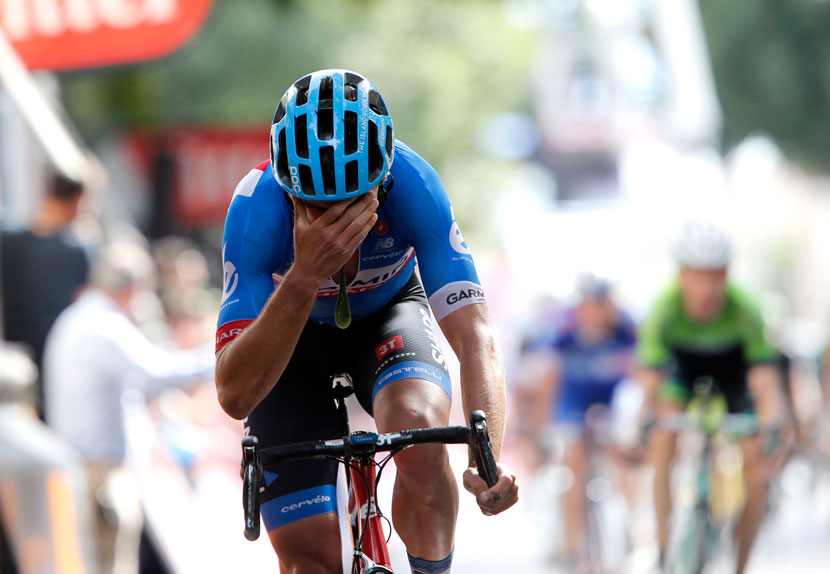 So close yet so far away… 10th place for Bauer in Nîmes.
Photo: Graham Watson

When you feel you’ve done a good job and didn’t get the prize you’d been fighting for, you can now say you’ve ‘done a Bauer’. And if you didn’t watch the sprint live, that’s okay. Once you’ve seen it, all these words will make sense. But do yourself a favour if you’re watching the delayed broadcast: don’t just look at the result and sigh. ‘Oh, a Kiwi in the top 10… cool.’ Nah, not at all. There’s much more to it.

Allow the clip to load, put it on high resolution, and turn up the volume. In any language the reaction of the commentary is going to be the same and the message is clear: So Bloody Close!

This was not ‘just another sprint stage’. It was a wonderful display of racing.

The GC battle and climbers have been in the spotlight of late, but on the eve of the second rest day it was ‘The Escapees’ who won. Okay, they were 10th and 16th but that’s not the full story.

Rest up. Find your voice. We’ll see you again on Tuesday to round out the 101st Tour. By then you might also have caught your breath again.

Thanks Jack. That was a great ride.