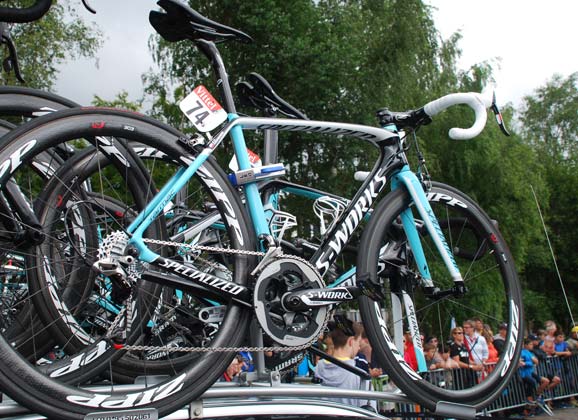 Before the start of the ninth stage of the 2014 Tour de France, the bike of Michal Kwiatowksi sat atop the Omega Pharma-Quickstep team car. A long-cage rear derailleur was noticed and yet the rear cluster seemed fairly standard. This prompted a quick discussion with one of the mechanics to find out why this set-up was being used. 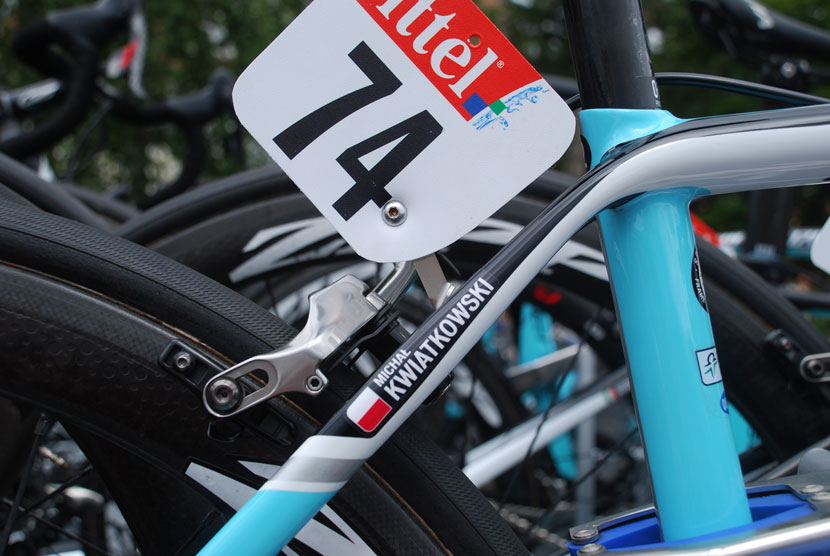 Rob Arnold spoke to Belgian Kenny Latomme about the Specialized bikes that have SRAM components. He explained that the climbing bikes have SRAM’s WiFLi derailleur… here is a transcript (and Soundcloud file) of the brief exchange in Gérardmer on the second Sunday of the race…

Click the link below to listen to Latomme’s explanation of some details of the OPQS bikes.

“We use the WiFLi if we have to use 11-30 cassettes, or 11-32,” explained Kenny Latomme when questioned about the use of the longer derailleurs.

“[Kwiatkowski] is using a 28 [for stage nine] but if he changes his mind at the last moment, we don’t have to change the complete rear derailleur. And it also works better with the 28 with a long cage than with a short one.”

RIDE: Is this just for Kwiatek or…

Latomme: “No. We mount them on all the Tarmacs – so the aerodynamic Venge doesn’t have it because normally they are for the sprints.

“For the sprints we are using the small cages”

Are there any other little differences between the bikes for climbing stages and sprint stages?

“It’s all about the weight. You see the guys have carbon bottle cages, titanium [spindle] pedals… and it’s all so we can go to the limit, to 6.8kg. And we’re really close to it.”

What are they weighing in at now?

And they do a daily scrutineering or not…?

“That’s what we don’t know. After the stage, they can always choose a bike and they check it – also to see if there is an engine inside. They did that after the Roubaix stage with Kwiatkowski’s bikes.”

They did an X-ray?

“Yep. And they couldn’t find anything.”

So the scrutineering is just random; they make a selection and they call you during the stage?

“Yep. The jury announce it 10 kilometres before the finish – or just after the finish – and they take the bike and the mechanic has to go with them, because he has the tools, and then they check it.”

Is there any need, to get the [requisite] 6.8kg, to add ballast?

“On some of the bikes, yes. We have to add weight. Underneath the bottom bracket there is a shell that comes off and that’s where we glue the [extra] weight in… 10 grams, or 20 grams…”

You literally have little weights that you stick on?

I know there are teams using cameras on this year’s Tour. Have you had cameras yet?

“Yes, the stage that was won by Trentin [stage seven]. We had a camera on the bike of Michal Golas but it was only working at the start because they wanted to film the start when he went to the sign-on and the official start to show how fast it goes.”

And you used the Shimano or Garmin…or which one did you use?

“I will not answer that. It’s not a sponsor.” 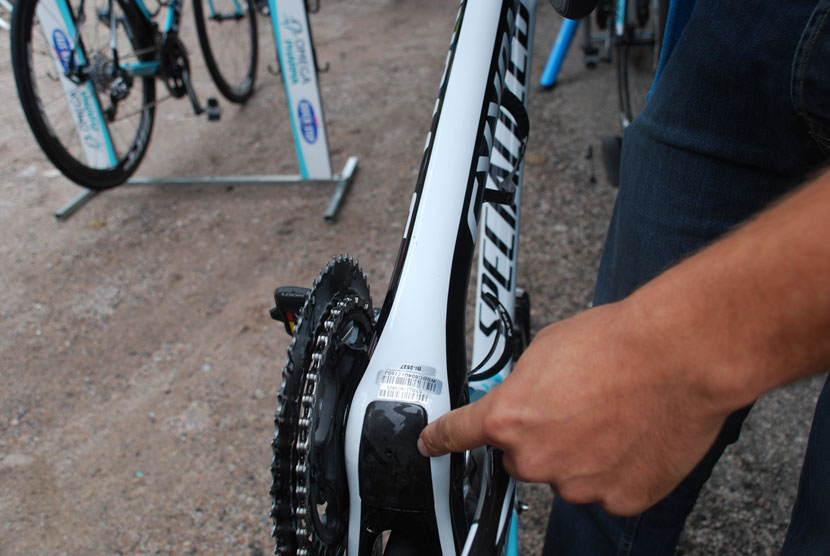 Where the ballast weight goes… inside the bottom bracket shell of the Tarmac SL.
Photo: Rob Arnold 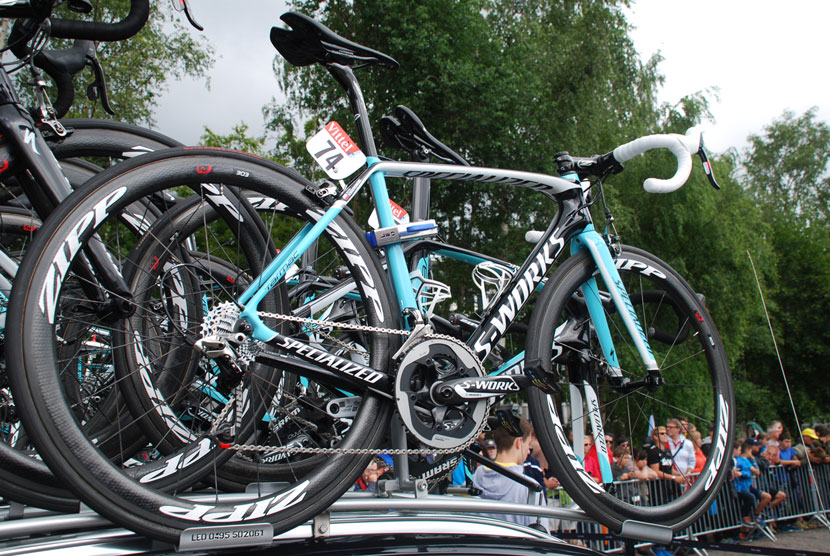 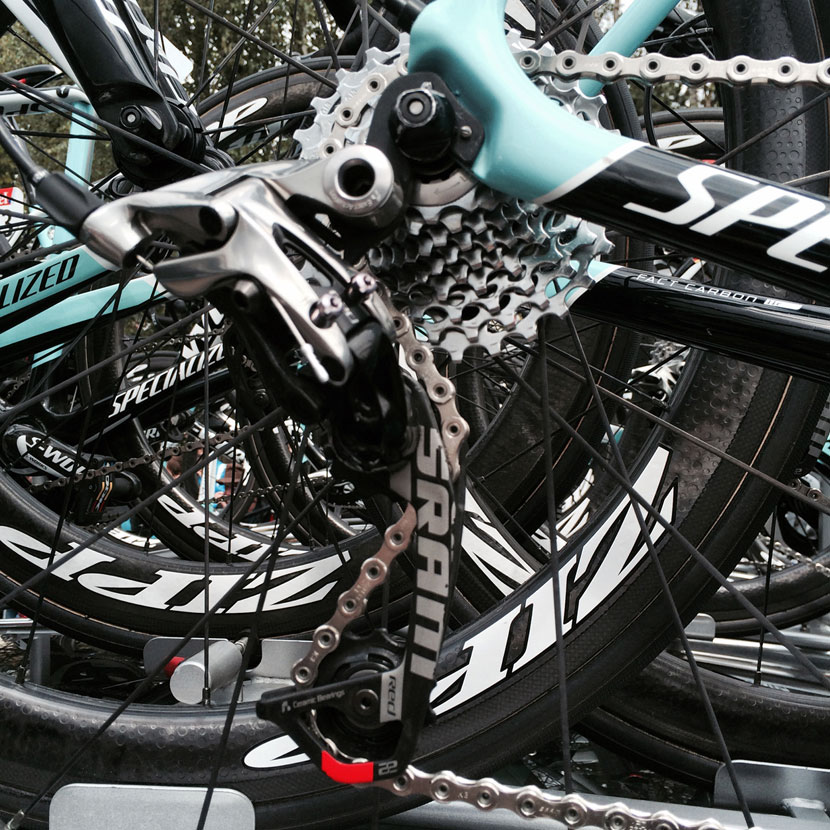 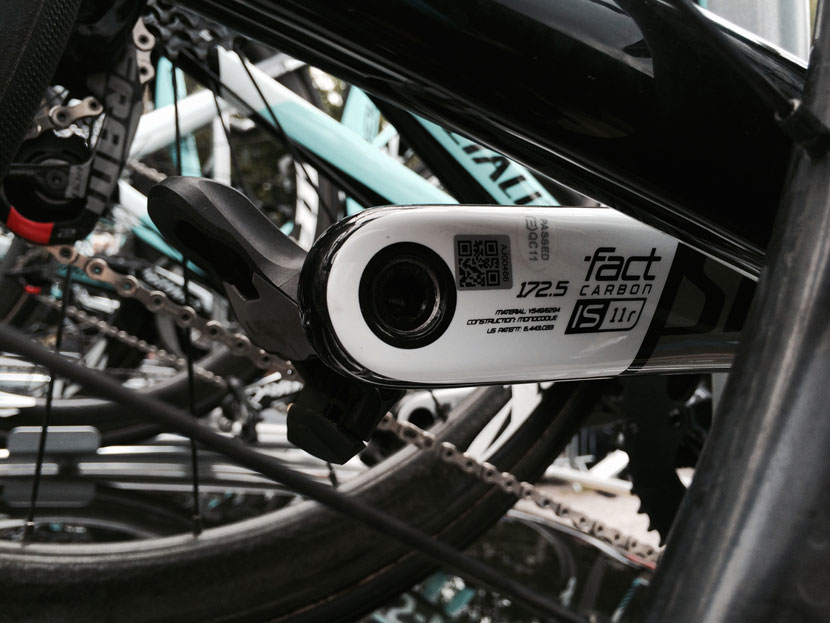