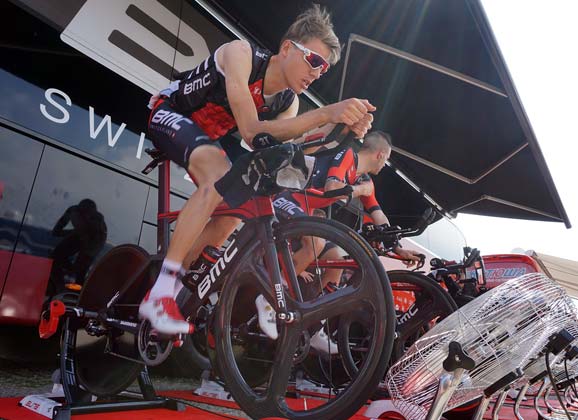 Preview of the TTT: BMC the favourites

The team time trial comes late on the itinerary of the 2015 Tour and the long list of casualties from crashes in the opening week means that some of the usual candidates for the win are riding for survival rather than victory. Well before the Grand Départ, however, BMC Racing had referenced the race from Vannes to Plumelec as one of the true targets for the team.

The world champions in this discipline have prepared well for the undulating 28km TTT and with the absence of some key riders from other teams, it’s fair to say BMC are the favourites for the ninth stage. 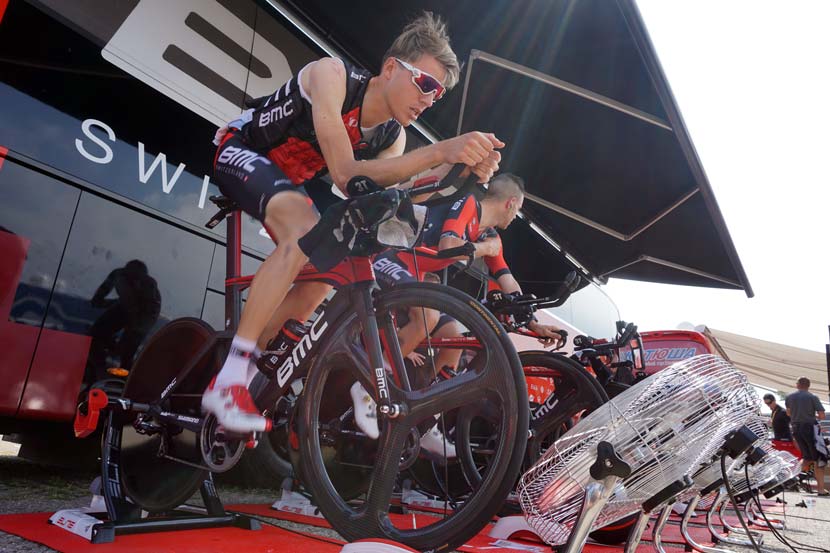 Warming up for the opening stage: BMC took the first yellow jersey of the 2015 Tour, can it put another rider in the lead of GC in stage nine?
Photo: Rob Arnold

The previous winner of a team time trial at the Tour, Orica-GreenEdge, has taken a beating in the first week and it will begin stage nine with just six riders, including one who continues to race despite having two broken ribs. “Considering what’s happened, it’s fair to say that instead of chasing the win we’re effectively going to have a rest day before the rest day,” said Matt White about the TTT two days ago.

Although they aimed to be competitive in stage nine, the absence of Simon Gerrans, Daryl Impey and Michael Albasini is going to cost the Australian team dearly. The last time there was a test of this kind in the Tour, two of the riders who have crashed out of the 2015 Tour benefitted strongly from the gains – both Gerrans and Impey wore the yellow jersey because of their record-setting ride in Nice two years ago.

One thing is virtually guaranteed for the race to Plumelec, OGE’s record average speed is not under threat. Unlike the 2013 TTT which was on a flat, fast course, the 2015 equivalent is on undulating terrain finishing on the same hill where stage one of the 2008 Tour concluded (and Alejandro Valverde took the maillot jaune).

“It’s tricky because typically in a team time trial you need a big engine who can do the work,” said the current race leader, Chris Froome after his eighth place in the uphill finish on Mûr-de-Bretagne in stage eight, “but with that hill up to the finish, you need climbers.

“Hopefully we’re going to be up there with the best tomorrow. I do believe we’ve got a strong all-round team so hopefully we can get five guys up there and set a time that’s on par with some of the other teams.” 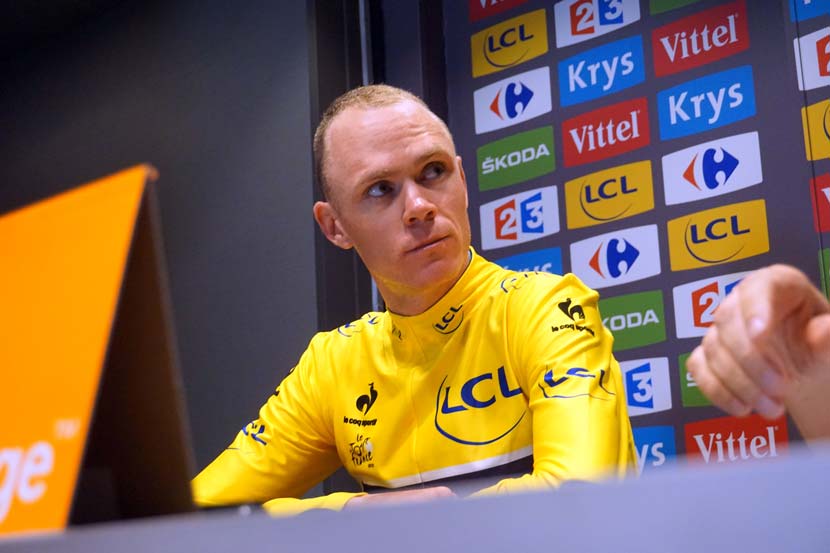 The stage before the first rest day is pivotal for the riders aiming for a high place in the general classification but judging on the display of defending Tour champion Vincenzo Nibali in stage eight, Astana will be aiming more to limit its losses than actually gain time on rivals. The Italian champion finished 30th at Mûr-de-Bretagne, dropping out of the yellow jersey’s group of 24 before the final kilometre of stage eight, losing 10 seconds to the likes of Froome, Tejay van Garderen, Alberto Contador and Nairo Quintana.

‘The Big Four’ nominated as riders favoured for the 2015 title before the start will remain protagonists as we race towards the mountains but it’s becoming apparent that van Garderen is taking the place of Nibali in that quartet – at least that’s one assumption that can be made on the second Saturday of Le Tour 2015.

Judging on past history in the TTT, it may even be that van Garderen finds himself as the fifth overall leader of the 102nd Tour de France. After eight stages and 1,310km of racing, the American leader of BMC Racing is ranked third overall, just 13 seconds behind Froome.

The TTT requires five riders to cross the line for the time to be taken and although Mark Cavendish claimed that the abandonment of Tony Martin after stage six “was like going from 12 men in the team to eight”, we cannot ignore the regular solid performers in this discipline. Etixx-Quickstep has won three stages already this year – one each for Martin, Zdenek Stybar and Cavendish – but the two-time world champions (in the discipline that was introduced as a trade team contest in 2012) are sure to put in a strong performance on the road to Plumelec.

There are three teams with two riders each in the top 10 of GC after eight stages: BMC, EQS and Tinkoff-Saxo… and the formidable line-up which includes Alberto Contador and the current youth classification leader, Peter Sagan, knows how to manage its resources on all sorts of terrain and all kinds of conditions.

The presence of road captain Michael Rogers at TCS cannot be ignored. He has the experience and strength to rally his cohort to make an impression and don’t be surprised if white turns to yellow after the 28km challenge on Sunday. It could happen, the Slovakian who has won three green jerseys at the Tour from three starts has been incredibly consistent already this year but perhaps the strain of these efforts will come at a price… either way, this team wants another rider in the maillot jaune and it doesn’t necessarily want it to happen quite this early. Still, Contador is a born racer and he won’t be easing off the pace in stage eigth. 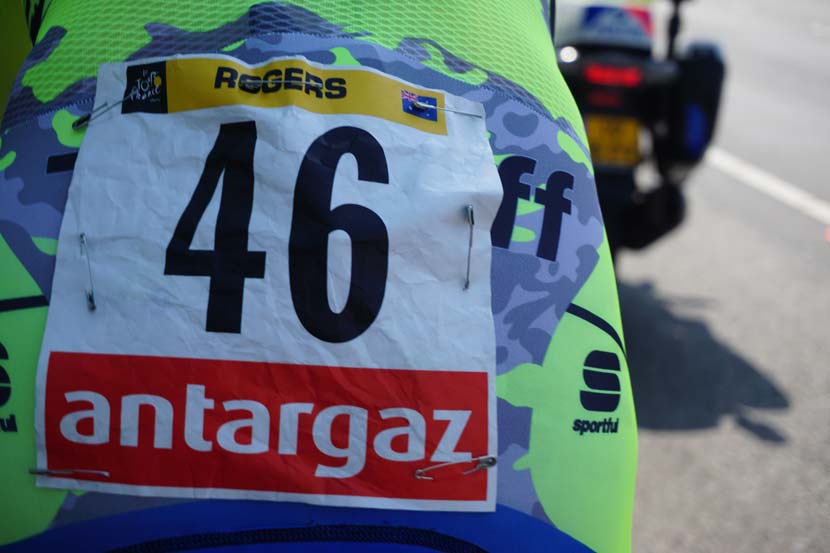 Michael Rogers is a four-time individual TT world champion and he’ll be a key member of the Tinkoff-Saxo team in stage nine.
Photo: Rob Arnold

Four teams have thus already been referenced as contenders for the win in stage nine: EQS, TCS, BMC and SKY, these are the final four to start the time trial (in that order, with Sky last to roll down the ramp at 4.45pm).

The start sequence is determined by the position of each formation in the team classification, with one exception: the outfit with the yellow jersey in its midst starts last.

BMC is leading the classification of the collective with an advantage of 1:44 over Tinkoff-Saxo, 3:43 over Etixx-Quickstep and 5:55 over last year’s team classification winners AG2R La Mondiale.

The rankings tell a story and remind us that AG2R (fifth-last starters), Giant-Alpecin (six-last) and Movistar (seventh- last) have strong, versatile line-ups capable of supporting leaders with a range of abilities. The GC specialists have the most to gain but it may be that the train of the German sprint team will get back on the rails for another crack at a win.

That takes the nominations of contenders to seven but really, we end this preview as it began and go for a prediction: the most likely winners will be the team that won the gold medal in Ponferrada last September, the team with the rider who set the fastest average speed for a Tour time trial one week ago, the team that includes the rider in third place overall, the team that has made this stage a priority for months. The favourites are BMC, stage nine is there for the taking. 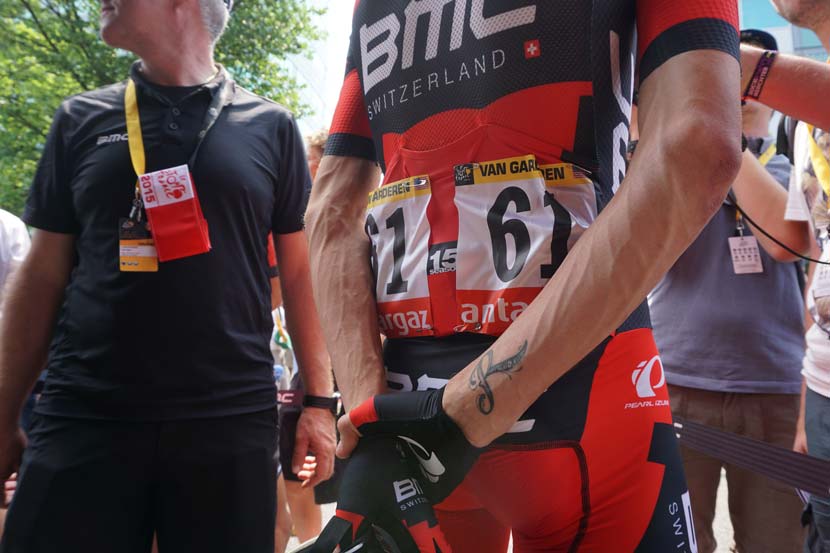 BMC’s leader, Tejay van Gardener is just 13 second shy of the yellow jersey. Can he become the second from his team to lead Le Tour 2015?
Photo: Rob Arnold