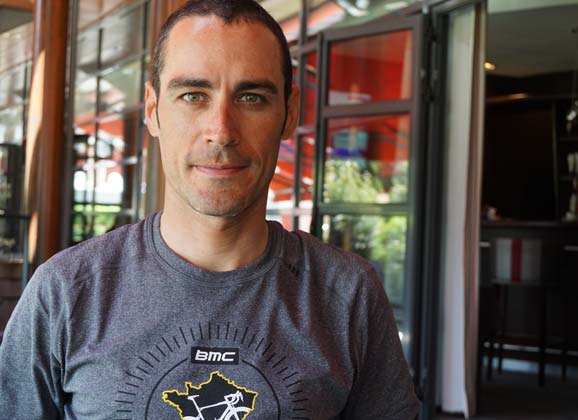 Quinziato: a domestique and a politician

We often hear about the work done for team leaders by cycling’s domestiques, how they fetch water bottles or offer a spare wheel if their leader has a puncture or how they sit at the front of the bunch setting the tempo for most of the day. These are the common themes when it comes to commentary about the workers of the peloton. There’s another job that the likes of Manuel Quinziato need to do to ensure that someone like Tejay van Garderen can get to the finish safely – the domestique also needs to be a politician.

Without respect from others in the bunch, it’s difficult for riders to do their job.

RIDE spoke to the Italian from BMC to get a little insight into the other chores of a team-mate in a race like the Tour de France. Here is a transcript of that exchange. 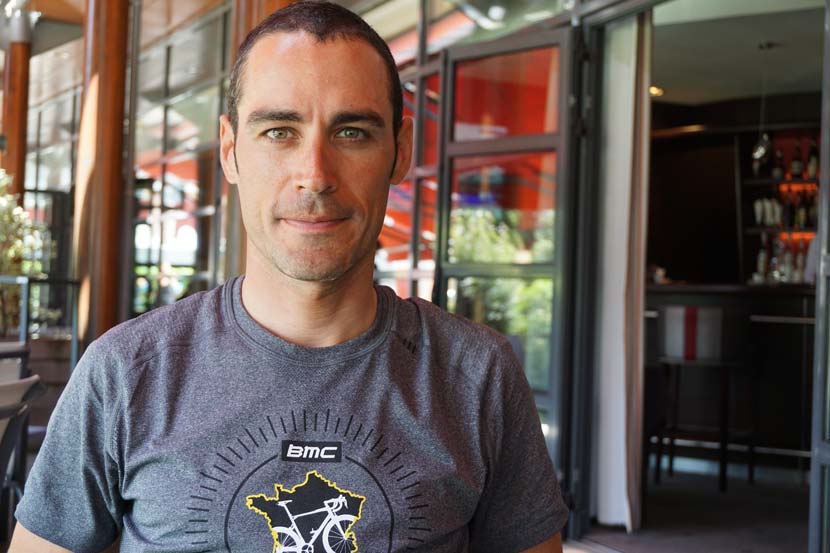 Manuel Quinziato: “One thing that I always say to my team-mates is: ‘If you can, always be friendly.’”
Photo: Rob Arnold

RIDE: I’m with Manuel Quinziato from BMC Racing who has been on the podium for the win of the team time trial of stage nine… I thought I’d talk to someone from this team other than Tejay or Rohan and find out how the first week has been. There’s been a lot of work for team-mates and a lot more yet to come. How is it all going for you?

Manuel Quinziato: “I think we can be really satisfied with our first nine stages. People like me, Daniel Oss, Greg Van Avermaet, Mickey Schär, we were really brought here for the first nine days. And so I don’t want to say that now things will get easier – now it’s more about climbers and a bit less about positioning.

“For us it was really vital to keep Tejay safe during the first nine days and we are happy because, already in stage two, we finished with only 24 guys in the front and there were six of us [from BMC].

“We did a really good cobblestone stage and we won the team time trial so it was a great first week with the yellow jersey and the stage win by Rohan  on day one.”

It’s always terrible stress for the first few days. How do you manage it? Everyone says, ‘You’ve just got to be in the front…’ and make these basic assumptions but it’s not easy to do is it?

“No, not all also because in the Tour de France the level is always two steps higher and everybody has the power and is able to stay in the front so the fight is big! That’s also why there are so many crashes.

“I can say that in the four years I was working for Cadel Evans he never crashed and there is a reason; it’s because we stayed a lot in the wind.

“You can say that maybe sometimes we wasted energy but in the last two stages before the team time trial we probably could have saved some energy because it was not quite so hectic like the days before but the point is, if you sit in position 50 and there is a crash in a small village then everything can be compromised.

“We are here to work to keep Tejay safe and the best way to keep him safe is to keep him in the front.”

What lessons have you learned from working with Cadel that you’re applying to Tejay? Can you talk a little bit about the two as leaders?

“With Cadel and with my first year in the team with George Hincapie, he would teach me the work that I’m doing now. In the end, positioning is vital above all and in the first week it’s really important.

“What we did with Cadel we’re doing now with Tejay.

“Every time things get stressful with narrow roads, with sidewinds, when it’s raining and the roads are wet, when there is a cobblestone section… just be at the front.

“You know, the better you work, the luckier you are.”

As someone who has got to keep the leader out of the way, is there someone in the bunch that you really try to avoid?

“No… well, ah – like someone who you could say is dangerous? Or someone who brings bad luck?

“No, not really. I couldn’t nominate someone really.

“I think that in this bunch, the one that got here to the Pyrenees, there are more guys who crashed than guys who didn’t crash.

“What you know is that as we protect our leader, other teams are protecting their leader. So you try not to be annoying with the other guys who are doing the same job.

“We respect each other and things are good.

“The day when we start missing a bit of respect it’ll be worse. It’s bad.

“So when you are at the side of a team that’s looking after their leader, if you have to box in somebody, it’s wise to do that to the guy before the leader, not the leader. That’s the rule – the unwritten rule.”

And everyone seems to apply that well?

“We’re all on the bike and it’s not that easy but, between the teams of the GC favourites, there’s a lot of respect: Sky, Movistar, Tinkoff-Saxo… it’s all okay with them.”

So you’re a worker but also a politican?

“One thing that I always say to my team-mates is: ‘If you can, always be friendly.’ Okay, when it’s necessary to make push come to shove and you have to do your job, it’s easier to do that when you have respect.

“I don’t want to see guys starting stupid discussions or fights with somebody else during the first week for personal reasons or just because one guy did something stupid.

“You have to try to be smart and it’s better to have friends in the peloton than enemies.”