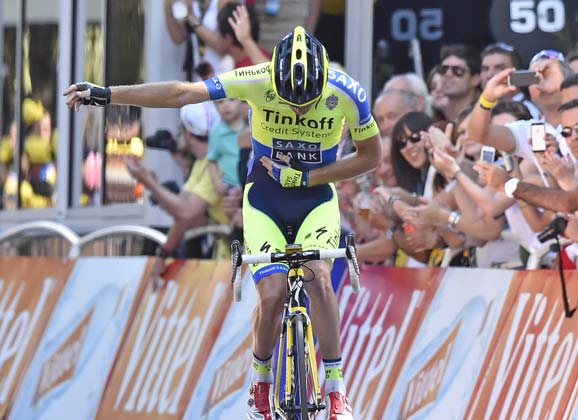 Rogers: the victory of a champion domestique

The Tour is back in the mountains and stories abound. An Italian continues to wear the yellow jersey. A Spaniard is the nearest challenger. The French have three in the top five of GC. And an Australian won a stage by taking a chance… 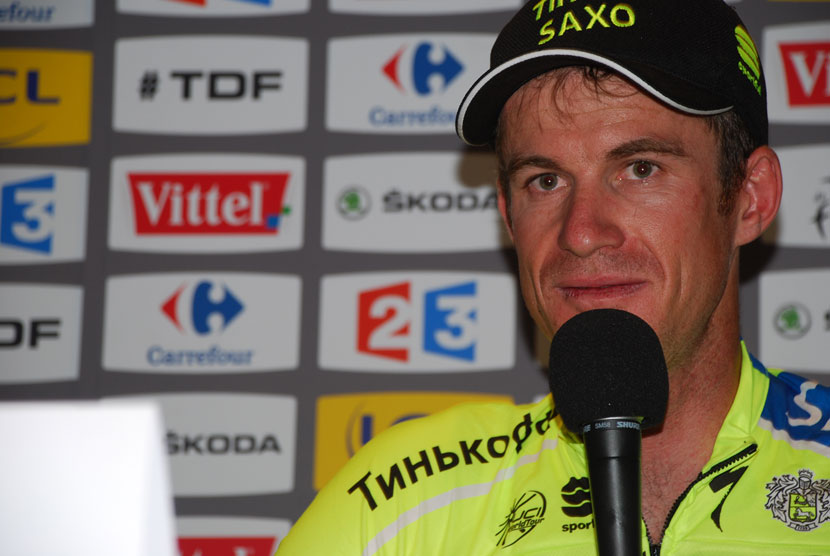 “Losing Alberto sucks but I think the nice thing about being in a team is that you define the team character in these moments.” The first rest day of the 2014 Tour de France forced Tinkoff-Saxo to take stock. Mick Rogers spoke about the end of the original goal. After having around 20 hours to reflect on Alberto Contador’s crash, the 34-year-old stated the obvious: “Now it’s our choice, the decision comes from the riders. We decide how to move forward.”

Onward they raced. And the team is showing its character.

“When you bet big, you can lose. And if you win, you win big. That’s what the top level is all about.”

Clearly there is a remedy to the team’s woes. The first to step forward was Rafal Majka; his stage win in the Alps offered solace. And then it was Rogers’ turn.

Into the wind he went. Attack! Never mind the consequence, take a chance. Roll the dice and see what comes of it.

That’s what he can do now. He’s free of doubt, free of the burden of considering the consequence. Liberated, he has become a race winner again.

“I’ve realised that you have to be in it to win it,” Rogers said in Bagnères-de-Luchon.

He is back in the peloton, cleared of his positive test for clenbuterol, and he’s winning. In stage 16 of the 101st Tour de France – 10 years after he made his debut in the race – he got the chance to bow as he crossed the line.

Contentment comes in many forms and it’s delivered in a range of ways. For a long time, Rogers believed that he would be able to put his obvious natural talent to use and get himself on the top of a Grand Tour podium. He’s won a wide range of races but he is not able to win the Tour de France or Giro d’Italia – he knows that now. Accepting this reality took him some time. Quite simply, these contests are two weeks too long for him to take the title.

Rogers began his cycling career on the track, winning pursuits and points races but he would reinvent himself after the Commonwealth Games in August 1998, the month after cycling itself began what would become an enormous cleansing. In Kuala Lumpur, Malaysia – when still officially classified a ‘junior’ – he took home two gold medals and bid farewell to the velodrome. It served him well, but the time had come to join The Other World of cycling… road racing – the pro scene. And immediately the offers came. He was contracted to Mapei before the age of 20 and then came the succession of elite teams.

With each he enjoyed success in a variety of ways – as an apprentice, as a domestique, as a leader, and as a winner. But ultimately he’d return to the role that most champions find too demeaning.

Domestique. It’s his calling. Never mind that he’s won three world championships (the first of which, of course, came retrospectively). Forget the fact that he’s claimed victory in stage races in Australia, Belgium, Germany, France, Spain, and the United States. Happy as he is to have these titles to his credit, Mick now knows that the job he’s best suited to, is helping others win Grand Tours.

That was the plan for Le Tour 2014. But his mate crashed. And so the remaining eight at Tinkoff-Saxo began to back themselves in the quest for ‘consolation’ prizes.

Rogers won in Luchon. Majka won in Risoul and is the reigning King of the Mountains.

Their leader may have crashed and burned but, out of the ashes, have come successful conquests.

Would the Australian who lives in Switzerland with an Italian wife and their three daughters have won the first stage of the third mountain massif had it not been for Contador’s crash? “Probably not,” said Rogers. Why? Because he’s a domestique who just happened to win because he got the chance.

“I would like to think I would have been really tired by now because I’d ridden so much on the front with Alberto in the yellow jersey,” he reminded everyone. 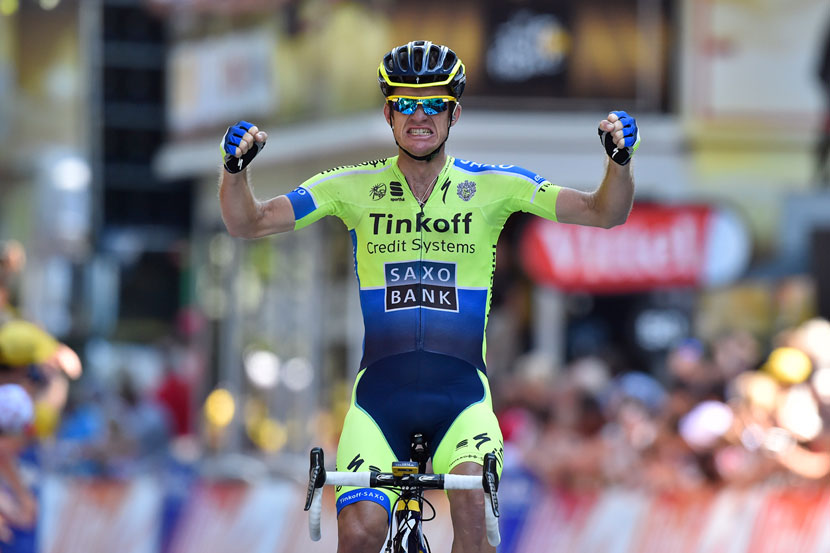 Victory. “Finally.” That’s what Mick Rogers would say when he saw friends at the finish in Luchon.
Photo: Yuzuru Sunada

The career of Mick Rogers lay in tatters late last year. A day before his 34th birthday, he got the news that clenbuterol was in his system when he won the Japan Cup, a race that came immediately after the Tour of Beijing. Contaminated meat consumed in a country where the drug is commonly used in agriculture was the cause. The UCI recognised that it was not deliberate doping. And eventually he’d be cleared.

Before he could race again, however, he’d go through the range of emotions that strike anyone who discovers that they could be unemployed. In his instance, job security was under threat because of a meal. Of course he’d be angry. He was frustrated and concerned that the positive result would leave a rank stain on his reputation. But he got another chance. And with that comes joy.

Freedom unties the knots in the stomach of a worried man. On his journey to freedom, Rogers had a unique opportunity – a chance to find himself again. During his suspension – by the UCI and his team alike – he had time to reflect, enjoy his family, and generally do things that he hadn’t done for over half his life.

But still he lived like a professional cyclist. “It’s my life’s diet,” he said. He trained. He continued to eat well. He didn’t succumb to depression or the lure of booze. He did everything as per normal, it’s just that he couldn’t race. Now that he’s been given the chance to do that again, he’s become a winner.

“Previously in my career, I was always too calculated, too scared of the outcome before it arrived,” Rogers said in Luchon. “And I’ve really realised that if you try your best, the worst thing that can happen is that you lose. And if you lose, at least you’ve tried… but you also open the doors to so many opportunities… and I see them much clearer now.”

Mick Rogers won his first Grand Tour stage at this year’s Giro d’Italia, 15 days after being cleared of his positive. He proved his pedigree, demonstrated that he’d not lost his touch, and offered a glimpse of what his veteran legs are able to do. When he’s not obliged to be the domestique he loves to be, he can sniff out opportunities for himself. He did that in stage 11 of the Giro and again in stage 20, on the penultimate day when he beat the peloton to Monte Zoncolan.

He was racing like a junior: full of energy and belief. And it paid off.

Freedom does good things to the body and mind. Rogers allowed himself to relax and that enabled him to see things for what they are. “When I was a kid, winning bike races was so easy,” he said when we spoke in Besancon hours after Contador had flown home. “And because I could do that, I got paid. It became my job but I’d forgotten what I liked about it. Now I remember: cycling is beautiful – and it doesn’t matter if you win or lose.

“We are blessed just to have the chance to ride our bikes.”

And this brings us back to the rapid descent into Luchon at the end of stage 16 of the 101st Tour de France. Was that easy? Was he free? Did he consider his emotions? Was he worried that he might lose his nerve?

“I knew the finish from several years ago [when] Thomas Voeckler won the stage – so I knew he was very motivated,” said Rogers. By then he’d explained how there’d been a bizarre exchange with the Frenchman who had won the two most recent Tour stages to this valley town. He wasn’t going to be conned into working for a rider from another team: this was to be his day. He dealt with the difficulty of getting into The Escape. He managed the wind and rode ahead of the yellow jersey and his cohort. The domestique found himself in a position to win and he seized it. “I said to myself: ‘Today, on this descent, I’m just going to risk it. And I’m not a person to take massive risks but I was desperate for that stage – I really was.

“I understood the opportunity that I had in front of me and, as I’ve said, I think Europcar really made some errors there and I picked up on it very quickly and I was obviously able to take advantage of it.

“Was it easy? Absolutely not. No way.

“As you all know, at the Tour there are no gifts. When you win a stage its because, on the day, you were the best.”

• Rogers: My goal is to ride the Tour

• Rogers: Ready for the Tour