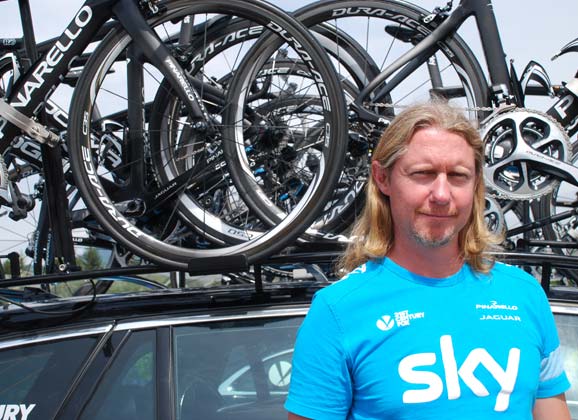 In June this year the bike supplier for Team Sky, Pinarello, unveiled a new frame that would make its debut at the Criterium du Dauphiné. That one-week stage race effectively became one of the final test sessions for a product that was created in collaboration with the British team’s car sponsor, Jaguar. The F8 is an entirely new look for the established Italian manufacturer that has been with Sky since the squad’s inception in 2010.

The Dogma 65.1 bike that had been used by Sky’s riders was one of the heavier in the peloton. Although many victories were achieved on that frame the team’s constant quest for “marginal gains” over its rivals meant that there was a rethink on the equipment used for the 2014 season. The F8 is lighter, more aerodynamic and significantly stiffer than the previous team bike. 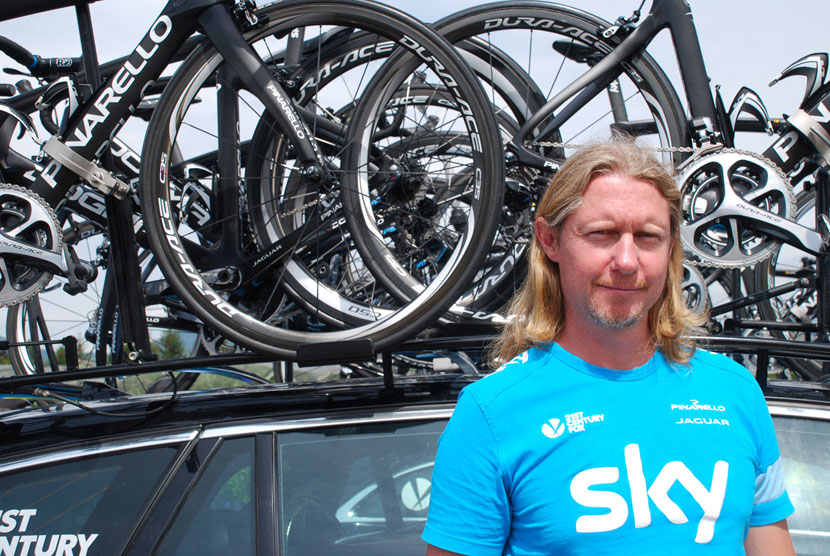 One of Team Sky’s mechanics, Gary Blem… “The equipment has been really stable and I just hope Shimano don’t come out with a 12-speed or a 13-speed groupset now. They always perfect something and then they change it to something new.”
Photo: Rob Arnold

We caught up with Gary Blem, a mechanic from Pretoria who is one of the most respected in pro cycling. He has an eye for detail and a reputation for building and maintaining quality equipment.

Before the Tour rode away from the Alps in the direction of Nîmes in stage 15, Rob Arnold spent 10 minutes with Blem, talking about the new bikes and finding out what exactly is inside the large truck that Gary has as a workshop at the Tour de France. You can read about (and listen to) the long list of products that fill the Sky truck… it’s an impressive collection of bicycle exotica and, let’s remember, this list is for one team of nine riders – now down to eight – and for just one race.

Below is a transcript of the exchange… 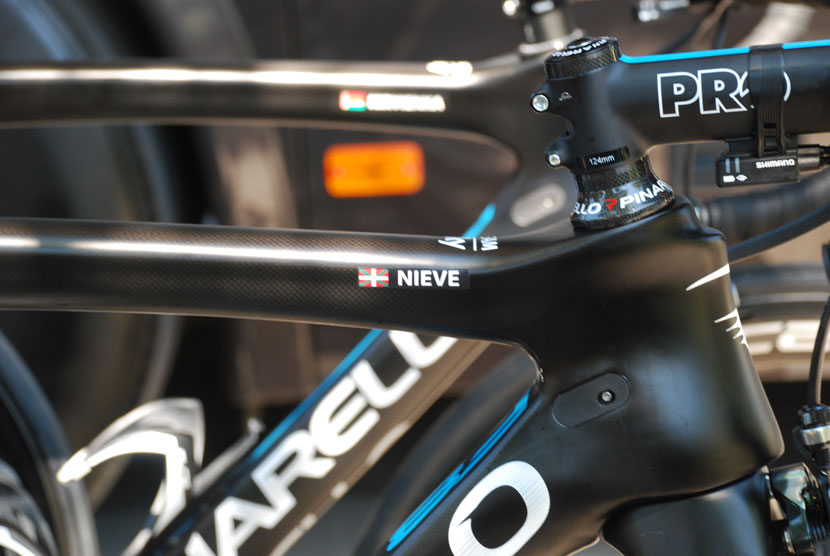 RIDE: I’m here with Gary Blem from Team Sky and we’re going to have a little chat about the new Pinarello. I wonder if you had to make many adjustments because you got the bikes and they made their debut in June. Are there any on-the-hop changes during the Tour de France?

Gary Blem: “No. Everything is pretty similar. The geometry is the same as the [Pinarello] 65.1. Obviously the bike is a lot more rigid than the 65.1 so some of the guys are feeling it and are just trying to get more comfortable on the bike, adjusting their saddle positions and so forth. That’s just minor issues. For the rest of it, they’re pretty stock standard.

“Most of the guys have adapted to the bike immediately.

“You can get a rider like [Vasil] Kiryienka who will still play with his position [as he was doing minutes before we spoke to Blem] but he’s always played with his position on all the bikes that he’s been on.”

“It’s not really the bike, it’s just him.

“You get some riders who are never really comfortable, so they’ll always play with the bikes but I’d say that the rest of the guys haven’t done much at all.

“They made small tweaks in the beginning, before the Tour started, and that was it.

“The bikes are good – really, really good. They are superlight: I think the frame is 150 grams lighter than the 65.1, so all in all it’s a great package.”

There is the real trend towards internal cable routing. As a mechanic is that the frustration of your life? Or does it work pretty well with the new Pinarello?

“It goes pretty well. We made a little tool to feed the cables through the frame and it goes relatively quickly. I can lace up a frame in three minutes – it’s super quick.

“The TT bikes are a little bit more complicated, obviously, because all the cables are fed through the handlebars so it takes a little bit longer: a bit more time and a bit more patience.

“But these are stock standard.

“I was a little bit nervous – or apprehensive – about coming into the Tour with a new bike but it’s been fantastic.” 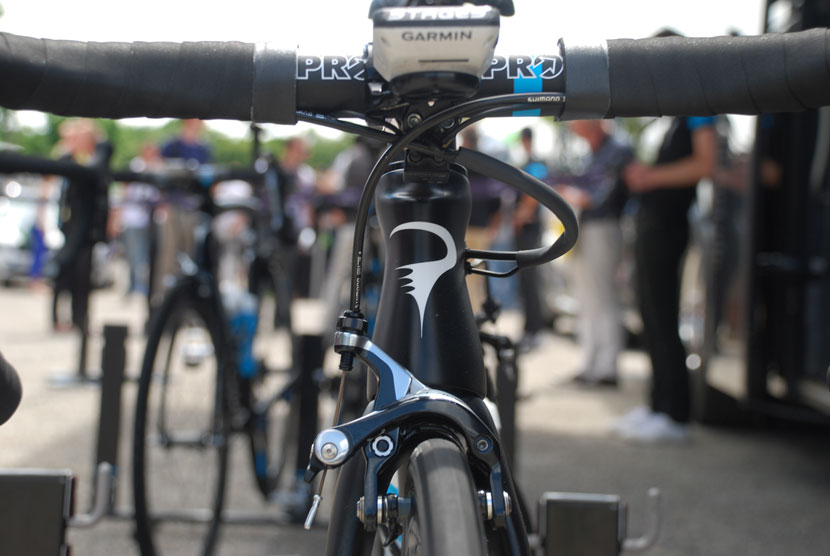 Can you just offer a quick overview of what you bring with you on Tour? I know it’s a fairly standard question for mechanics but how many bikes are in the truck?

“Each rider has three bikes – three road bikes: their race [bike], first spare, and a second spare. So there are 27 F8 bikes on the truck currently.

“Then, we carry, on average, an additional seven groupsets; one groupset in each car that goes with us to the start, a complete groupset… and then five more groupsets in the truck. Then, on occasion, we’ll get a top up from the service corse or from Shimano directly. So we don’t really need to take more than that.

“We take a lot of brake pads, let’s say about 100 rolls of bar tape, 100 tyres… so the tyres are always pretty new on the bikes. You don’t see worn out tyres. We don’t ride them until they’re worn, especially during the Tour. At smaller races, we’ll use them a bit longer but the Tour is much bigger so we don’t risk it.

Your collection of wheels… that must be a fairly big haul.

“Yeah, the thing is just to get the combinations correct. We have got 25 pairs of [Shimano] C50 wheels – brand new; 23 pairs of C35 wheels – also brand new; and I’ve only brought 18 pairs of C24 wheels with us. The reason being that, because the bikes are so light, no many guys can use the C24 because the bike will come in under weight.

“Also, obviously, the deeper the rim, the more aerodynamic the bike is going to be. So if your bike can weigh 6.8kg with a deep rim on it that means you’re scoring an advantage there.

“Then I’ve got a few C75 wheels – only about six pairs of those because not many guys use them.

“Then we also have another van which has got all our TT equipment in it: a race and spare TT bike for everyone, and another 22 disc wheels to go along with that. The same with the tri-spoke wheels…

“So we carry a huge selection of wheels and products [on the TT truck] but that’ll only come down in a few days time, it’s not with us currently.

“It’s always risky to carry equipment with you in vans… so we try and limit the risk of exposure of equipment.

“Obviously, at this Tour, we had what we called the ‘Roubaix stage’ so we needed new bikes for all the guys as well, the Kobe bikes, so we had to assemble them as well. And we also had special tyres for that: C50 wheels with 27mm tyres.”

The rest of the time, they’re running… what? 23mm?

So this apparent trend towards fatter tyres, does that exist in your world?

“I would like to see it happen more. Still, on our climbing wheels we’ll use 22mm tyres but I don’t think it’s necessary anymore. I think we can use 23 and 24mm tyres – the reason being is that bikes are light enough, so you don’t even need to try and save weight on the tyres.

“The broader tyres work out to be a little bit more aerodynamic than the skinny ones from the past.

“We try different combinations and see what works the best for us but because of the new bike we’ve had to [work on combinations].

“As you could see in the Dauphiné, Froomie was riding a C50 rear wheel and a C24 front wheel just to balance the weight on the bike.

“Obviously he still scores the aero wheel – and a stiffer wheel – on the rear going up a mountain. It’s been pretty good. Actually, the equipment this year has been fantastic. There have been vast improvements on Shimano’s part, on Pinarello’s part… and we’ve had minimal issues so I think that’s why it’s been a relatively easy Tour apart from all the crashes we’ve had.

“The equipment has been really stable and I just hope Shimano don’t come out with a 12-speed or a 13-speed groupset now. They always perfect something and then they change it to something new.” 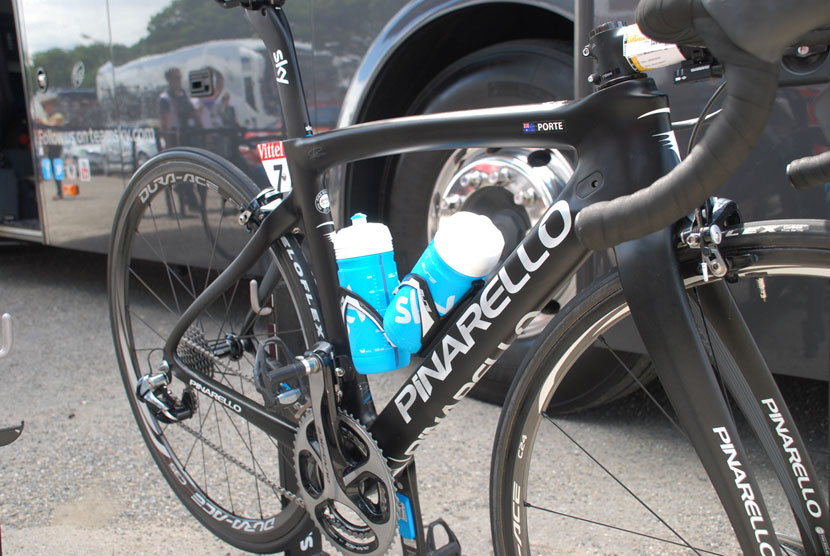 Has your team had a day with the [on-bike] camera? Which day was that?

“I think it was this past Wednesday.”

And who rode with it?

“I think it was Kiryienka and Danny Pate.”

And did you find the installation rudimentary?

And then the other change, I guess, is going to Stages [power meters] this year. Do you have much to do with that or is that more Tim Kerrison’s job?

“Well, Tim is not at all the races with us so we do it most of the time.”

And it calibrates without fuss?

“The only thing is, because we use a jet spray to wash the bikes, we’ve got to be careful that we don’t get water in the system. I think that is our biggest headache at present – we’re not being careful enough. Other than that, they’ve been really reliable and I’m super happy.

“I mean, the weight on that [system] is 20 grams, versus the product we used previously we save in the region of 180 grams.

“Like I said: this year the products have been very good.”