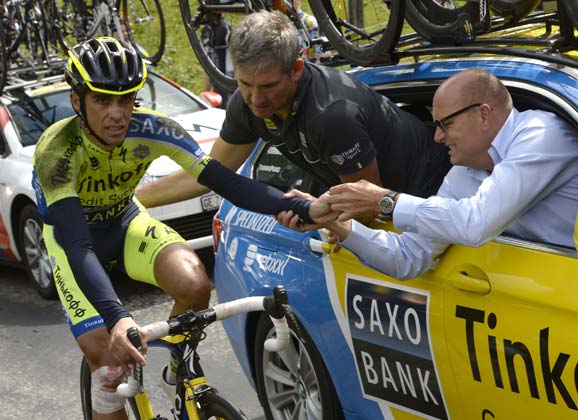 The actual story of Contador’s frame

Some events of stage 10 changed the nature of the 101st Tour de France. The crash of Alberto Contador and his subsequent retirement meant that one thing is certain about the 2014 edition of the race: there will be a new winner. The two previous champions who were in the peloton on 5 July are both out of the race because of accidents.

And yet much of the discussion on social media following the race to La Planche Belles Filles related to cracked carbon-fibre. Speculation about the Specialized bike used by Contador was rife. Rumours emerged about the state of the frame even before the fractured tibia was diagnosed. 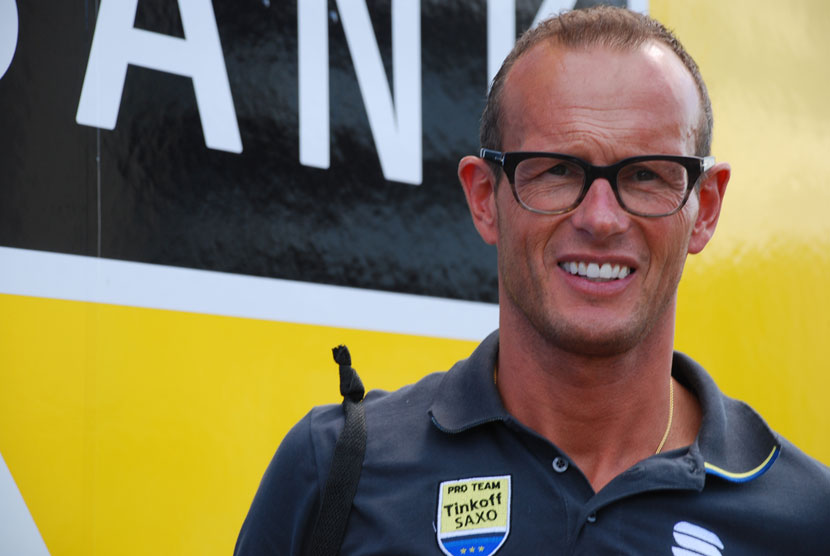 Christophe Desimpelaere outside the Tinkoff-Saxo truck that contains the collection of Specialized bikes used in the Tour de France.
Photo: Rob Arnold

“It’s weird,” lamented one of Contador’s Tinkoff-Saxo team-mates, ‘Nico’ Roche, a day later, “Alberto is out of the race with a broken leg and all people seem to want to talk about is a broken bike.”

And, oddly, much of the discussion was based around what had been seen on TV. It has since calmed down a little as actual facts are being circulated, rather than simply the progression of rumours.

To listen to Rob Arnold’s interview with Christophe Desimpelaere, click on the link below.

On the rest day, RIDE went to the Tinkoff-Saxo team hotel in Besancon and spoke with some of the mechanics from the team to find out what they knew. Faustino Muñoz has followed Contador from team to team throughout his career and he was the staff member who tended to the rider after the accident around the 94km mark of stage 10. He is a passionate man and yet his reaction to questions about the cracked frame was a shrug of the shoulders and a pushed out bottom lip: “No problem, huh? Not with the bike. But Alberto is broken.”

When pushed for more information, the Spaniard confessed that his English wasn’t sufficient to explain the details of the scene. And so he called over Christophe Desimpelaere, a Belgian who lives in Denmark. As explained on the team’s site, he’s “been on the team since its founding in 1998, making him the person with the most years of service at Tinkoff-Saxo”.

Desimpelaere takes up the story of what actually happened…

“Alberto crashed on his race bike – his original race bike. This bike had no damage… well, some small damage on the saddle and the shifters.

“His first spare bike, which also has a [race] number – a frame number – was on the first [team] car. On the way up to Alberto to change the bike, this car hit the Belkin [team’s] car with the roof racks. This is why his first spare bike was totally demolished.” 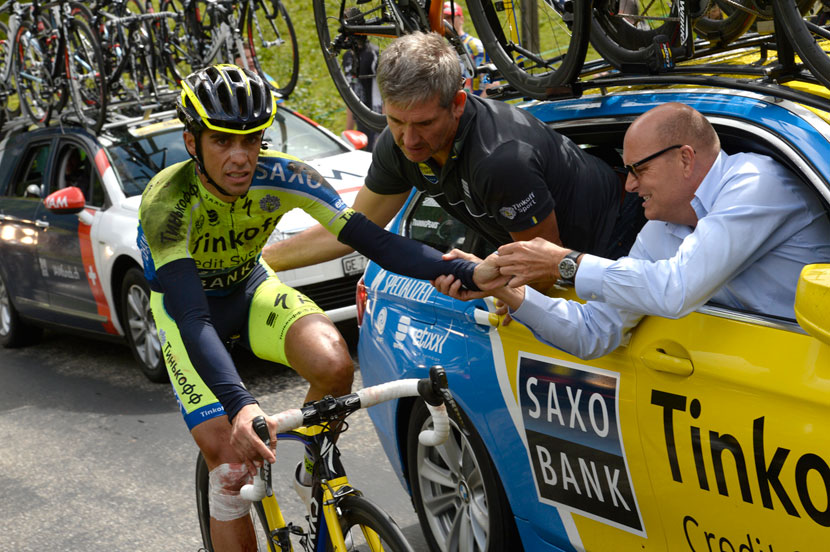 Contador is tended to by Faustino Munoz and Bjarne Riis as he rides along with a fractured tibia after his crash in stage 10 of the 2014 Tour.
Photo: Graham Watson

To clarify a few rumours: the bike was not “run over” by the other team’s car. It was destroyed while on the top of the car, fastened to the roof racks. Seem weird? A little, but Desimpelaere clarified his comments explaining that the urgency required to get to Contador as quickly as possible forced the Tinkoff-Saxo team car up on the verge on the left side of the road. And, because of this, the roof racks tilted downward, thus forcing the spare bike – the one on the right side of the roof racks (ie. the side of the car where Muñoz sits) – into the Belkin car’s racks.

Of course team cars pass each other in close proximity often during bike races so it seems confusing that, in this instance, a bike could be destroyed in such a way. But a crash of a two-time champion – and major favourite for the title – required dramatic action. The movement up on the “hill” that was on the left of the road was of a sufficient angle for the bike to strike the other car’s racks with such force that it sheered two tubes in half.

Put it this way: Contador’s team car was not going slow.

“The road race very narrow and our car when up to the edge. Which means the whole car was ‘that’ way,” explained Desimpelaere as he gestured the angle of the car’s tilt.

“Alberto’s bike was the first on the side [for ease of access should he require a quick change]. And it hit the Belkin bikes on the roof.

“Then [Contador] went on Nico’s bike which was the McLaren, because his bike was not available at that moment. And then, when the second car came – when he got help from his doctors for his knee – at that time, he got his second spare bike which did not have the frame number.”

The commentary on Twitter has referenced many of the elements explained Desimpelaere including the use of Roche’s McLaren-branded Specialized, the missing frame number, and so on… but the speculation, in some instances, drew incorrect conclusions.

“His first spare bike has a frame number,” reiterated Desimpelaere. “ASO is asking all the leaders from each team [to see to it] that all spare bikes have a frame number. This is why some people took a picture of this demolished bike and said that this was from the crash… this bike had not even been ridden by Alberto at any time [in stage 10].”