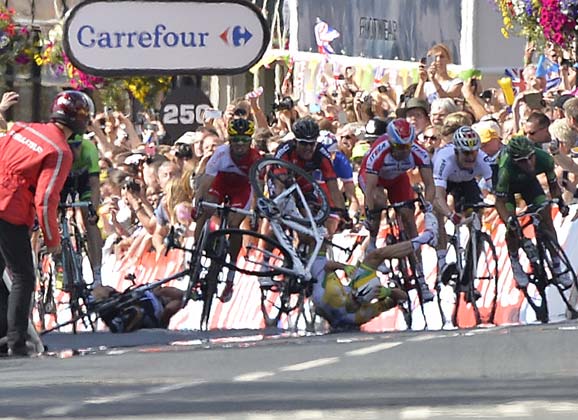 When is a crash an “act of violence”?

Minutes after the incident that would ultimately cost Mark Cavendish his spot in the peloton of the 2014 Tour his former team-mate Matt Goss tweeted: “I’m pretty sure @Mark_Renshaw got kicked out of the Tour a few years back for a head but that was a lot less than that of Cav’s!”

The reference related to stage 11 of the 2010 Tour when the lead-out specialist clashed with Julian Dean who, at the time, was racing with the Garmin team and looking after the American sprinter Tyler Farrar. Renshaw used his head to try and hold position in the bunch in the finale of a race won by Cavendish and his actions cost him a place in the race. 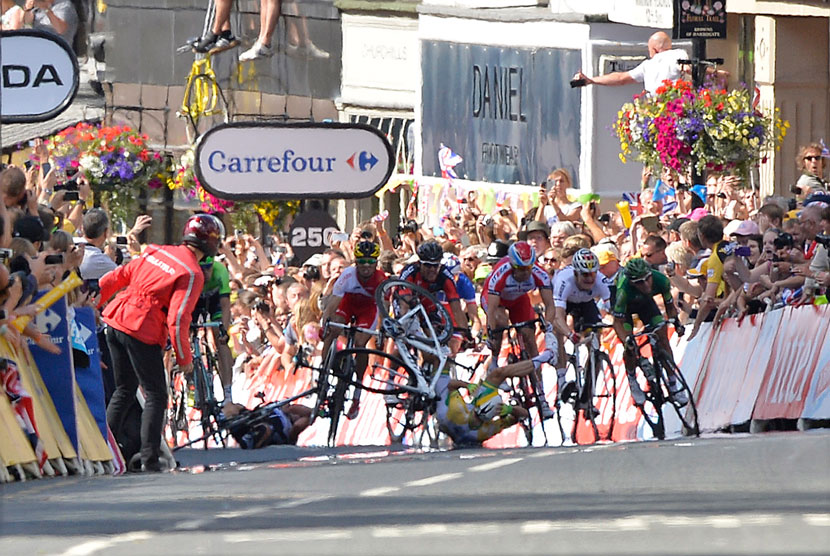 “Disqualified.” It’s a denotation no rider wants, but the commissaires were compelled to take extreme action as they insisted that they had to act against dangerous riding.

Renshaw expressed his frustration, congratulated ‘Cav’, packed his bags and caught a train back home. His team appealed but the decision was made and the judges held firm on their ruling. Renshaw’s race was over at the midway mark because he used his head to hold himself up against another rider who was also trying to lead a sprinter to the finish line.

“I think Cavendish will win regardless of whether he’s got one rider or five with him,” said Renshaw back in 2010 after having a day to reflect. “He’s 10 times the sprinter that Tyler Farrar is. I think Farrar is just flapping around the place, making up the numbers – I can’t see him winning a sprint. The only way they could win is if they take us out. It think that’s the attitude that Garmin has; it’s sad to say but Julian Dean’s sole objective seemed to be to come up and put me into the barriers… it’s sad that that is the only way they can try and win races.”

There have been plenty of relegations over the years but disqualifications are far less common. The Renshaw incident in Bourg-les-Valence in 2010 is the most recent example of dangerous riding costing someone a place in the peloton.

“Even if I committed an error, it wasn’t deliberate,” said Renshaw at the time, “and I don’t think it was to the level that I should be disqualified.

“In the heat of the moment, I may have committed some things wrong… You’ll see that I moved away once I realised I might have impeded him but I don’t think that offence warrants getting kicked out of the Tour de France.”

The ruling would mark the end of what had been amicable relationships. “I’d never wish for anyone to get sent home from the Tour de France because I know how much it means to a rider, to the team, and to the sponsors,” continued Renshaw with his appraisal of the ruling. “From the reports of what they’ve said – that the disqualification was justified, that my actions were intentional – I think it’s pretty harsh. I won’t speak with anyone from Garmin anymore.” 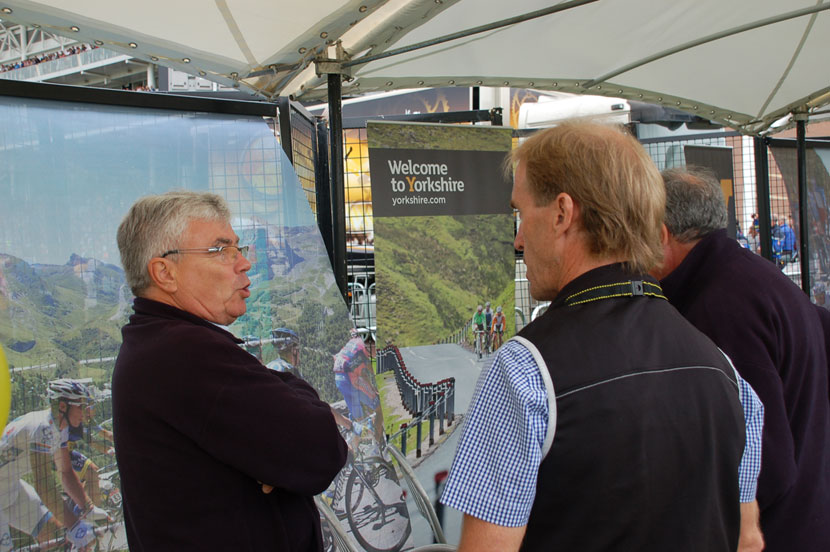 Fast-forward four years and we find ourselves in Harrogate in front of an enormous crowd on day one of the 101st Tour. The yellow jersey is on offer for the winner. And Mark Cavendish is the favourite. Inside the final two kilometres Fabian Cancellara launches blistering attack. He’s done this before at the Tour and it’s paid great dividends: remember stage three in 2007? What a display it was. But nah, there wouldn’t be a repeat in 2014. The sprinters, as expected, would have their way.

Cavendish takes up the story: “Simon [Gerrans] and I came up and I think two of us wanted Peter Sagan’s wheel. The others moved to the left. I wanted to go but Gerrans was there. I used my head to try to take us across the road. Gerrans wasn’t budging. I wasn’t budging. We crossed bars and we both went down… I wanted it that bad and I tried to find a gap that wasn’t there.”

The footage tells the story. The Manxman and the Australian champion were sprawled out on the ground. They’d both get back on their bikes and roll across the line. Both were sore. Both were frustrated.

Time to reflect on what happened can’t change the situation: the rider who admits to causing the crash is out of the race. “I spoke to Simon after the stage,” explained Cavendish this morning. “I asked if he was okay and I also spoke to him on the phone later and apologised.”

The others involved remain in the peloton and life goes on.

Gerrans lost a lot of skin at day before the stage he’d earmarked as one that perfectly suited his characteristics. The winner of the 100th edition of Liège-Bastogne-Liège prepared meticulously for the stage from York to Sheffield. He believed it could offer him an opportunity to claim another stage win and perhaps even the yellow jersey… again.

He’s 166th overall and optimistic despite the setback but Orica-GreenEdge has been forced into considering a B-plan.

“Surprisingly Simon is not too bad,” said one of the team’s staff members, Neil Stephens. “He’s got a lot of skin off all over his back and he’s pretty banged up but we’re still going ahead with the strategy for today.

“The force of the crash and the twisting around [of the body] is the main concern,” continued Stephens. “He’s a little bit sore but when you start to move the abductors have moved around and that’s the problem… Had it not been for the crash yesterday we would never have even thought of a B-plan.

“We’ve got quite a number of guys who are pretty good in that situation: Albasini, Clarke, Yates – they’re all pretty good.”

Still, questions remain about how the commissaires respond to dangerous riding. And clearly they don’t agree with the appraisal of Matt Goss and many others who have posted commentary about the crash in Harrogate.

(To listen to Neil’s take on the crash and the plan for stage two, click the SoundCloud file below. Please note: he was waiting for the UCI commissaires and there is a brief pause when it seemed they were ready to talk to him.) 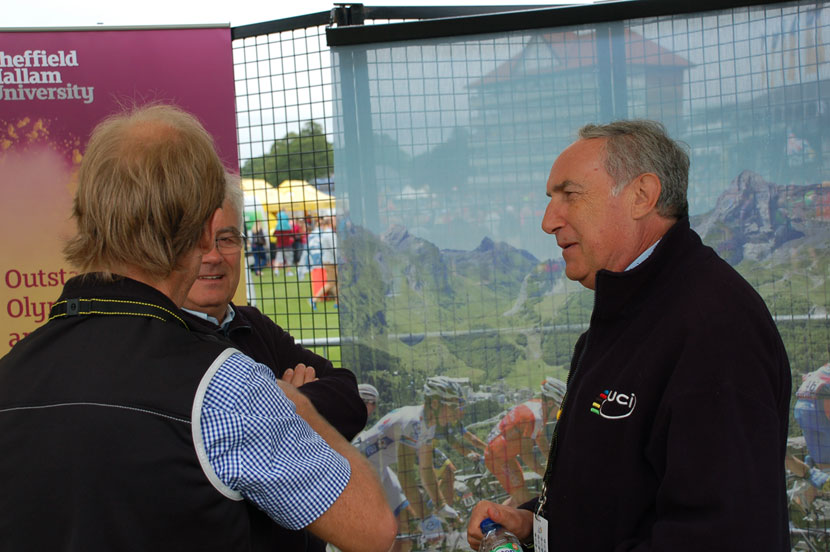 Before the start of the second stage, the Orica-GreenEdge team wanted to find out why there was not formal notice given to Mark Cavendish because of the incident in Harrowgate. Neil Stephens asked some questions and he spoke to RIDE about the explanation. “We just wanted to question why there was nothing written up in the communiqué about the crash yesterday,” he said.

“Basically they said that they only had two choices: to place Mark last [in in the front group, 177th] – which they did; or to eliminate a rider for an act of violence.

“If you look at the crash – with a bit of a head-butt and a bit of a push out of the way, there’s probably something there: most people would class that as an act of violence but the UCI don’t see it that way. But it’s really hard for a team to take – and a sponsor to take – that there was nothing actually written up about it. They told me that a written warning doesn’t mean anything so they didn’t want to write anything.

“Maybe there should be a bit of advice that you shouldn’t ride a bike like that but they don’t see it that way.

“I can understand some logic: we’re in England, it’s a big show, and Mark is a great champion… but sometimes you’ve also got to think about the amount of effort that we also go through to try and win a stage of the Tour de France. To lose in a way like that is a bit sad as well.

“It’s good that Mark has said publicly that it’s his fault. It’s good that he rang ‘Gerro’ and apologised but that doesn’t take away the missed opportunity yesterday.”

By the way, no one crashed on the day of Renshaw’s disqualification…