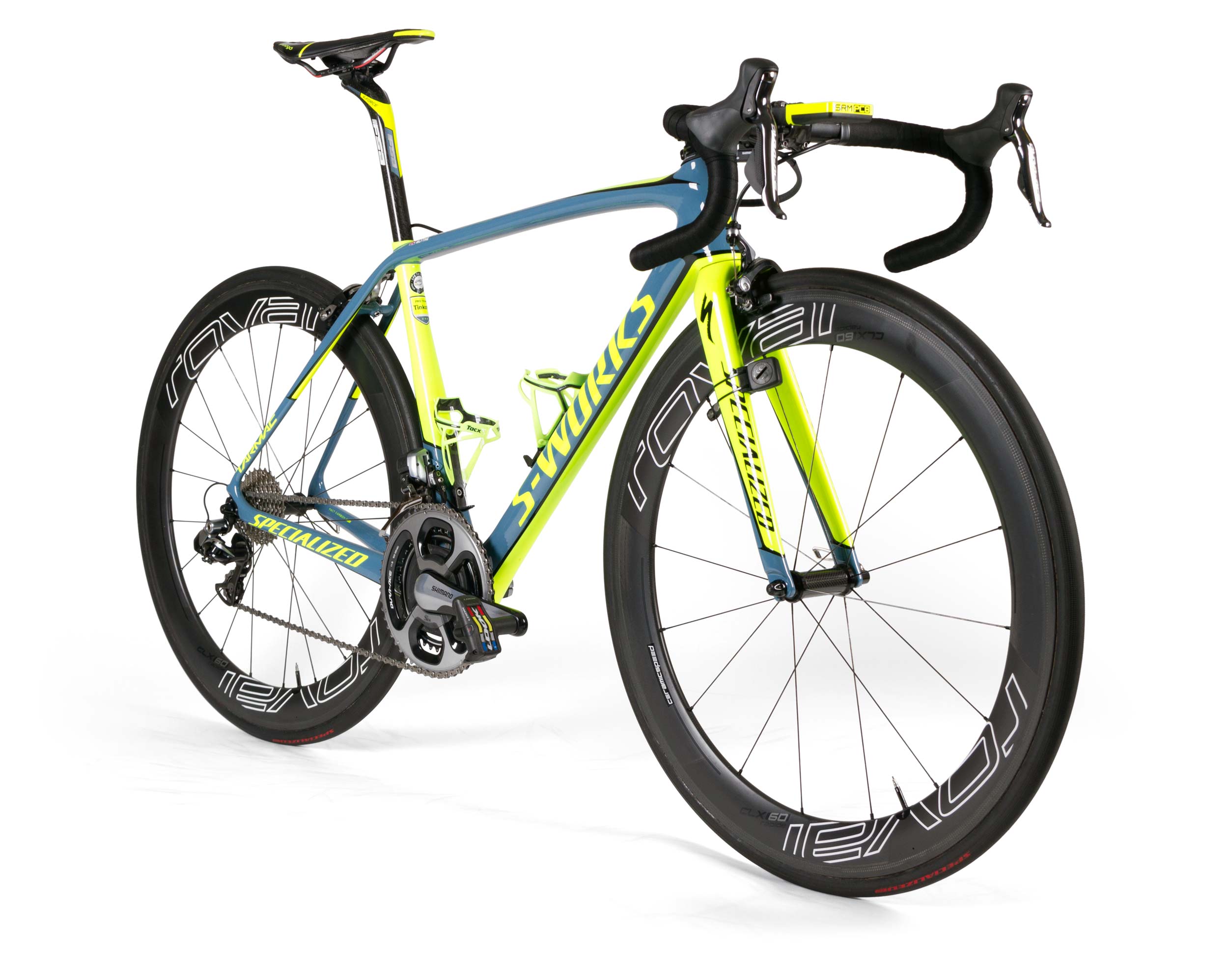 It took only a day of competition with his new team before Adam Blythe began experimenting with bike selection… mid-race.

“I did the criterium [before the Tour Down Under] on the Venge – and that was mega, it was real fun! I did the first stage on it,” but as the opening day began with a small hill, he used the Tarmac first… but then made a mid-race swap.

“After the climb, I changed after that onto the Venge.” 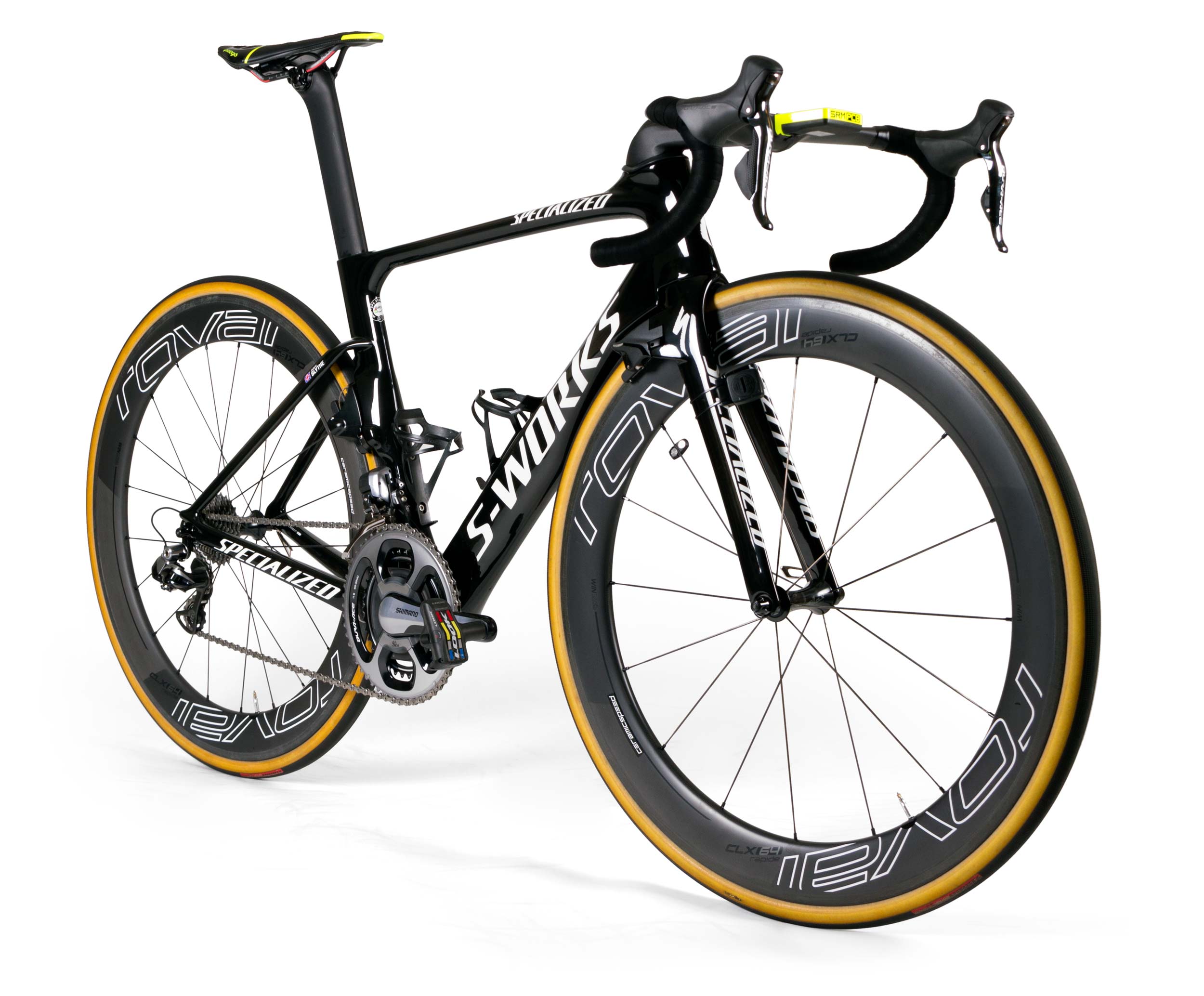 “I try not to be on my brakes all the time,” said Blythe about the stopping power of the ViAS brakes. “It’s not like we’re going down big mountain passes where we’re going 80km/h or slamming on your brakes as hard as you can… It’s just the odd touch of brakes every now and then but I’ve never gone, ‘Oh shit, I can’t stop.’” 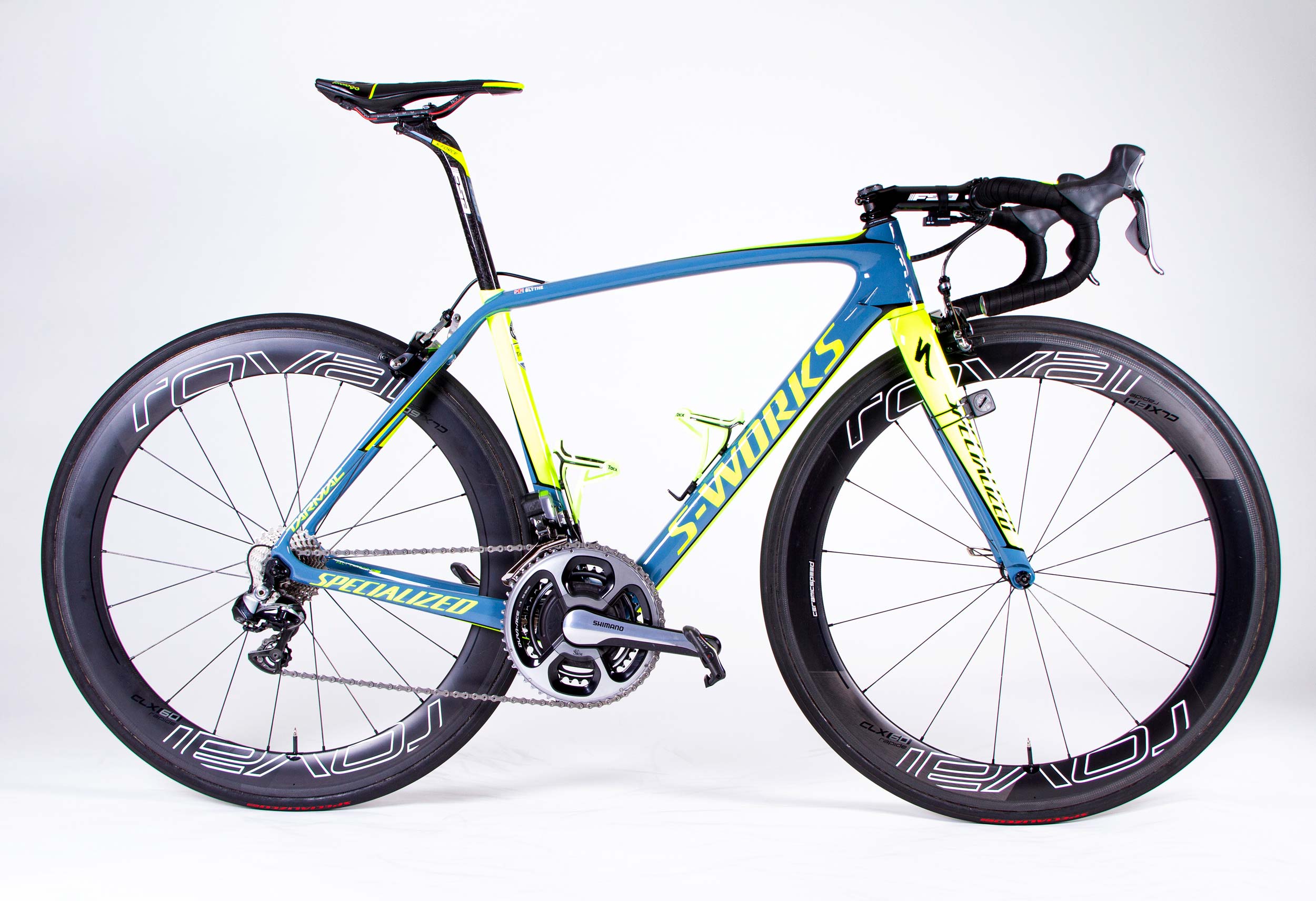 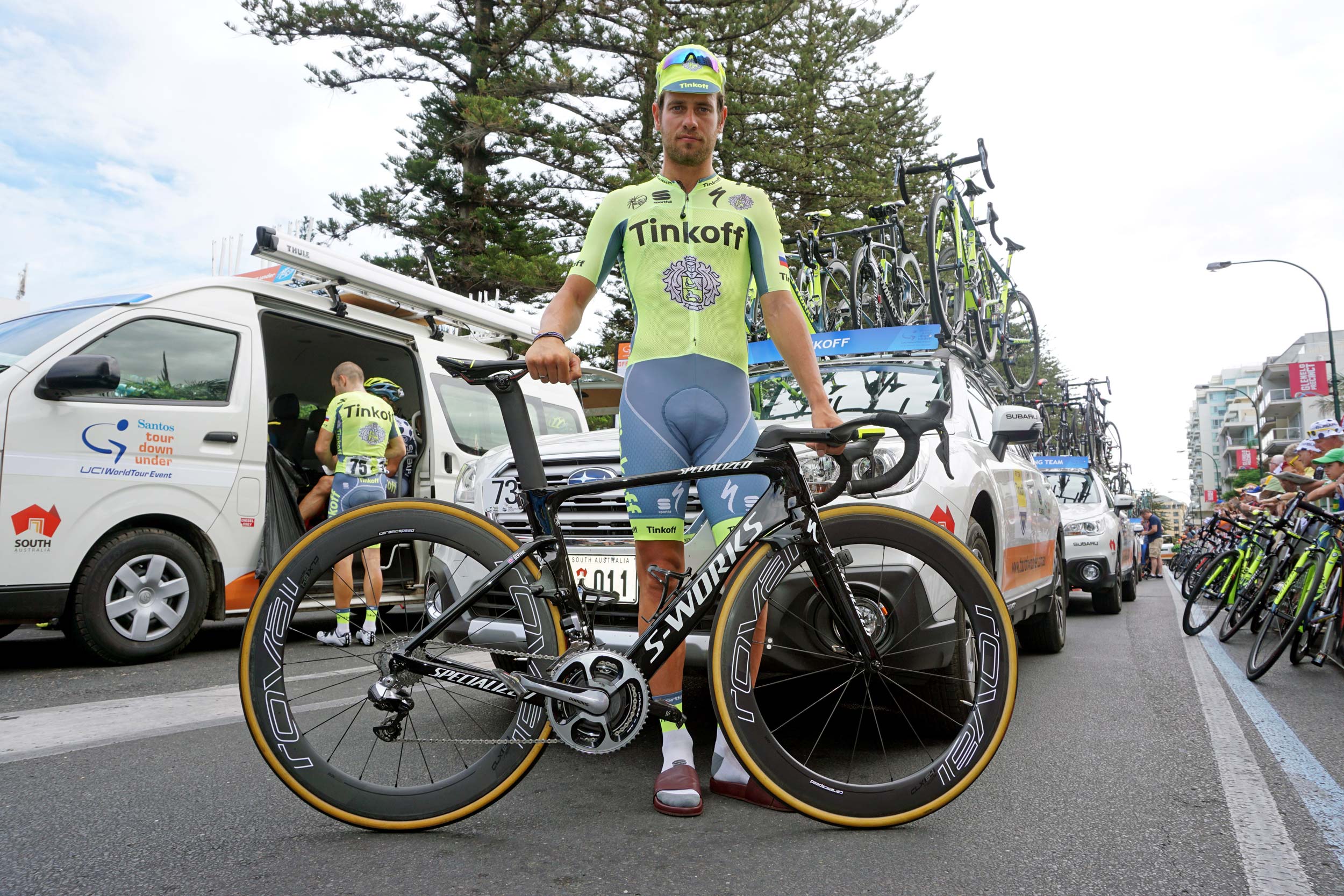 A talking point with any Specialized sponsor team is which bike the riders choose for racing. The US brand has a road model for all occasions but for pro cyclists, the choice boils down to the new (in 2016) ultra-fast, yet slightly heavy, Venge ViAS or the more classic-looking Tarmac.

British Tinkoff recruit Adam Blythe is happy with either bike and rides both (sometimes with a mid-race switch) but his preference is the Venge ViAS.

It is a bike that’s known to cause headaches for shop-wrenchies (especially when seeing it for the first time) but it has not presented team mechanics with many issues.

Tinkoff’s mechanic Rune Kristensen simply shrugged when asked about the Venge’s capacity to burgle time saying: “It takes a little longer… especially for the set-up, but you get used to it.” Tinkoff has made a few changes to the bike to make the job a bit easier however. The most noticeable alteration is that the main junction box for Di2 sits underneath the saddle, rather than below the BB as Specialized intends.

Kristensen explained that “it’s easier for us to access every time we have to adjust the gears. We have a workstand where the bike is standing on the bottom bracket – instead of having to go down there, it’s easier under the saddle.”

He had to drill a small hole in the seatpost and add a battery clamp in the post to enable this position but he’s happy with the result. Another difference on the team’s Venge ViAS against Specialized’s stock model is the use of the BB30 pressfit CeramicSpeed bottom bracket.

Tinkoff had a commercial arrangement to use CeramicSpeed products in the jockey wheels, wheel bearings, headset and bottom bracket which means that its mechanics had to throw away the Specialized OSBB and replace it with a bottom bracket that does not require adaptors if using a 24mm crank spindle like that found on Dura-Ace cranks (rather than the 30mm spindle on the S-Works cranks).

Kristensen said that this bottom bracket felt stiffer for the riders than the alternative and that, “the bearings come a little longer out so we don’t need to use an adaptor and this makes more sense for us.” 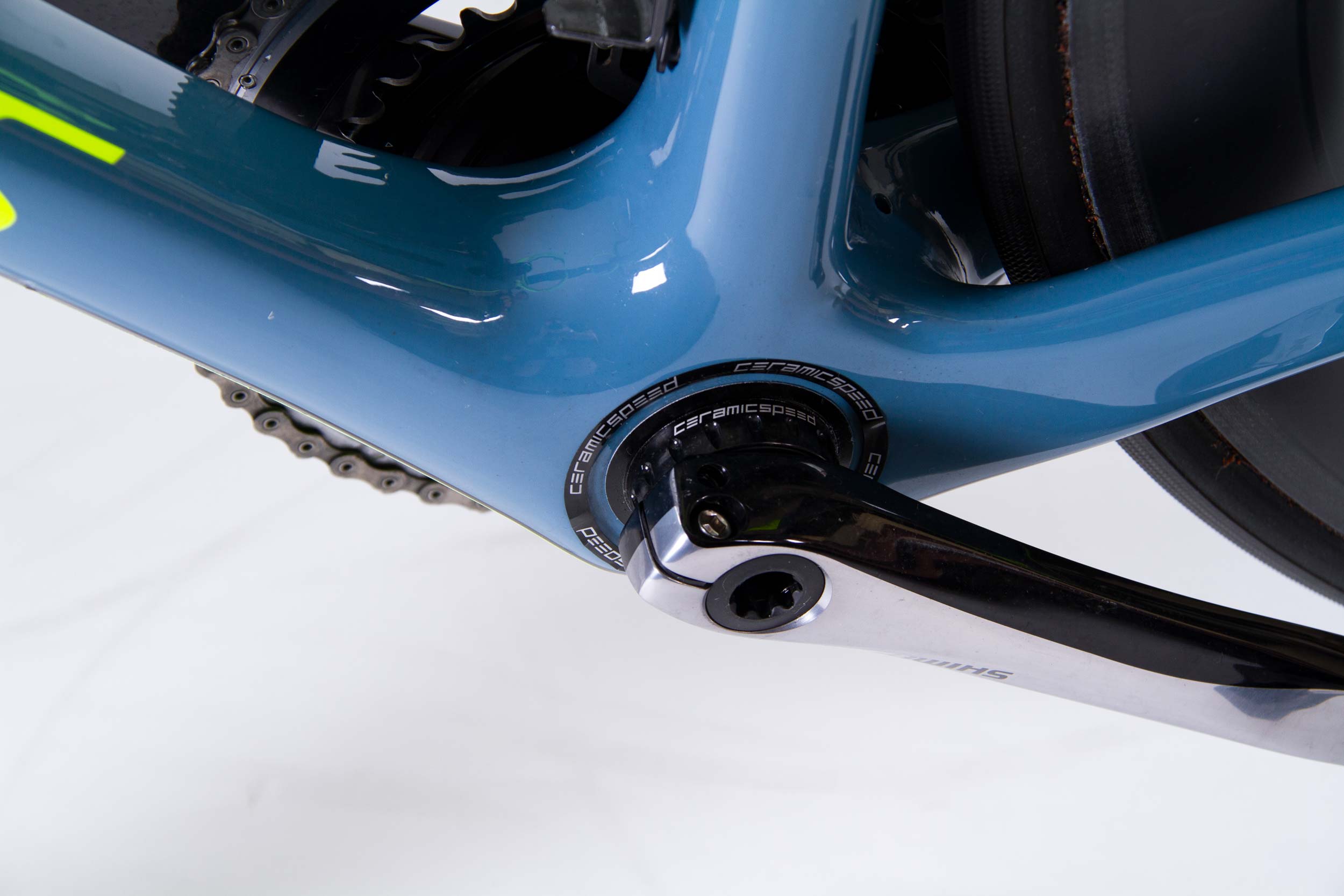 Blythe uses a 38-tooth inside chainring on both bikes. When asked if this was a hangover from his days at Orica-GreenEdge (where Gerrans, Impey and others employ such a set-up), Kristensen seemed a little offended.

“We’ve done it for years. Last year we didn’t do it, but otherwise, for many years we just took 38 as standard. Then you have a little bit smaller gear. Anyway, if you’re on the small chainring, you want a small gear.” 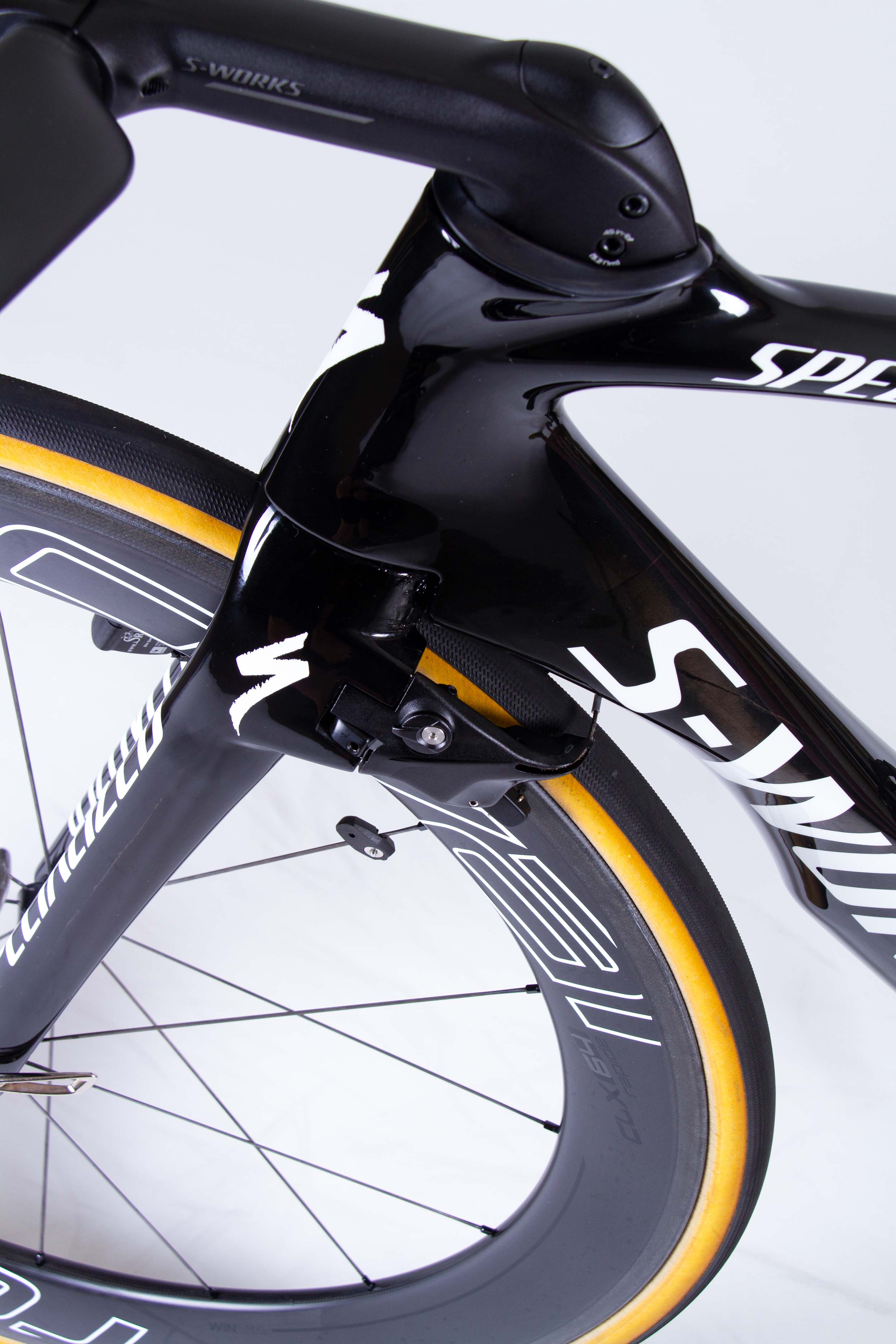 Anyone concerned with tyre clearance on the Venge ViAS should look at Blythe’s bike with 26mm clinchers. (His Tarmac used 24mm tubulars.)

Tinkoff does not have many Roval CLX 64 wheels that are tubular, but will be receiving more for the European summer. Until then, it has to carry tubes and clincher tyres in its service course as well as tubulars for the Roval CLX 60 tyres. For the most part, Blythe’s Specialized bikes are set up the same. Obviously, the Venge ViAS requires special bars, stem and seatpost. His Tarmac bike has a larger cassette, narrower bars, shallower profile wheels and 10mm more setback on the saddle.

Blythe is only new to Specialized, but he’s become quite adept at switching from one bike to the next. “I can tell the difference between going on that bike and my Tarmac, so yeah… why not use it?”

Do you notice the difference? “Yeah. It’s stiffer, faster… the position is a little bit different because the handlebars – I haven’t got the same handlebars on but apart from that it’s basically exactly the same.”