Another team that has made the switch to a disc brake fleet in 2020 is Bahrain-McLaren. The former title sponsor, bike brand Merida, has added a small innovation that’s designed to keep the Shimano system cooler… as one of the team’s mechanics explains. 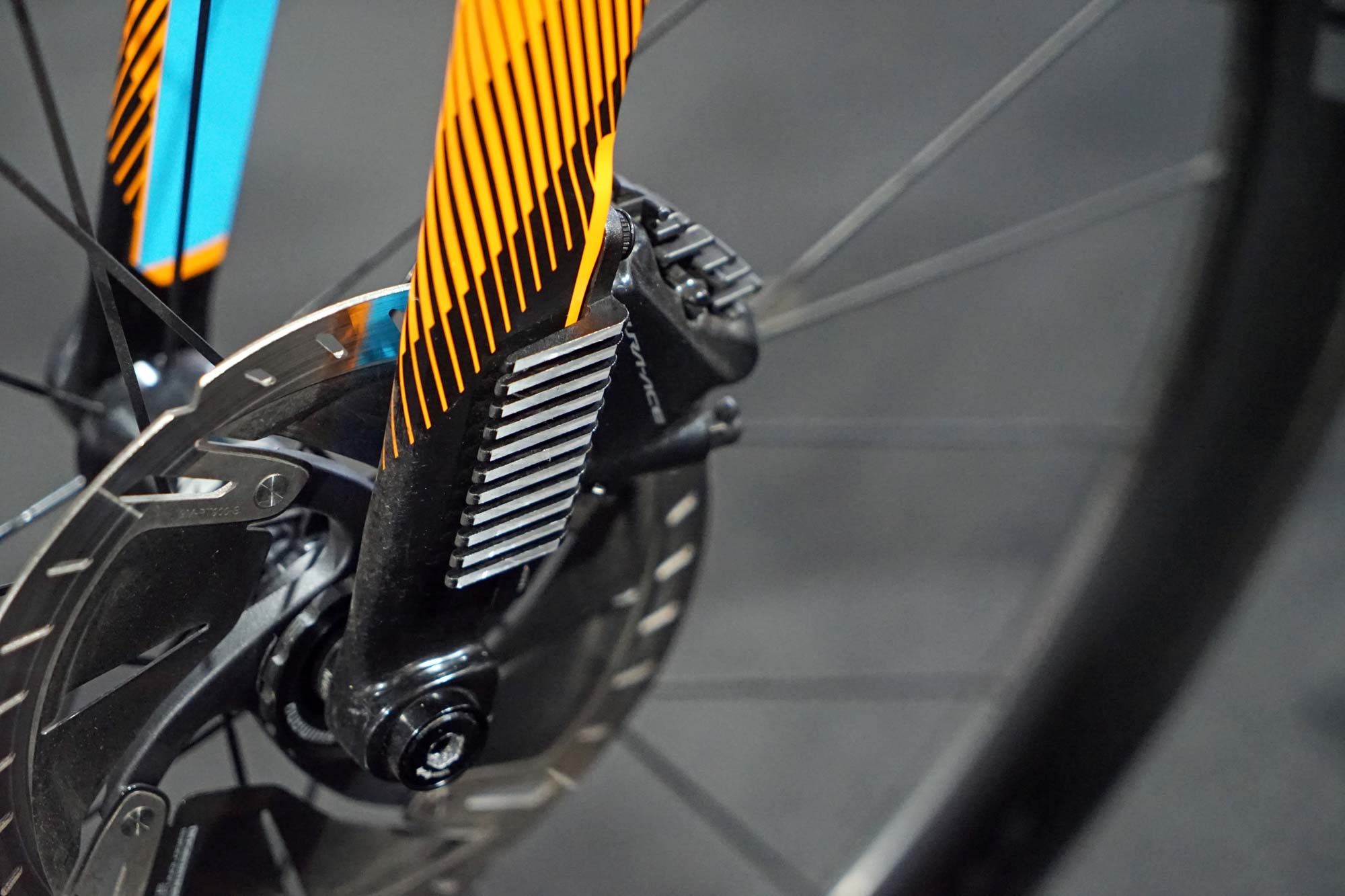 Like several other teams, wheel changes in races for Bahrain-McLaren mechanics will be effected with a power drill fitted with a hex-key. Some teams have a quick-release option but Alan Dumic, a Croatian mechanic, says the bolted thru-axle is a great system – and he’s confident that changes will be almost as quick as they were with calliper/rim brakes.

There were a few Merida bikes with disc brakes being raced by the team in 2019 but this year this stopping method is far more prevalent – being used on both the lightweight Scultura frame as well as the aero Reacto. There is, however, something extra on the Merida bikes – and RIDE Media asked Dumic to explain.

– Read our quick Q&A with the Bahrain-McLaren mechanic below. – 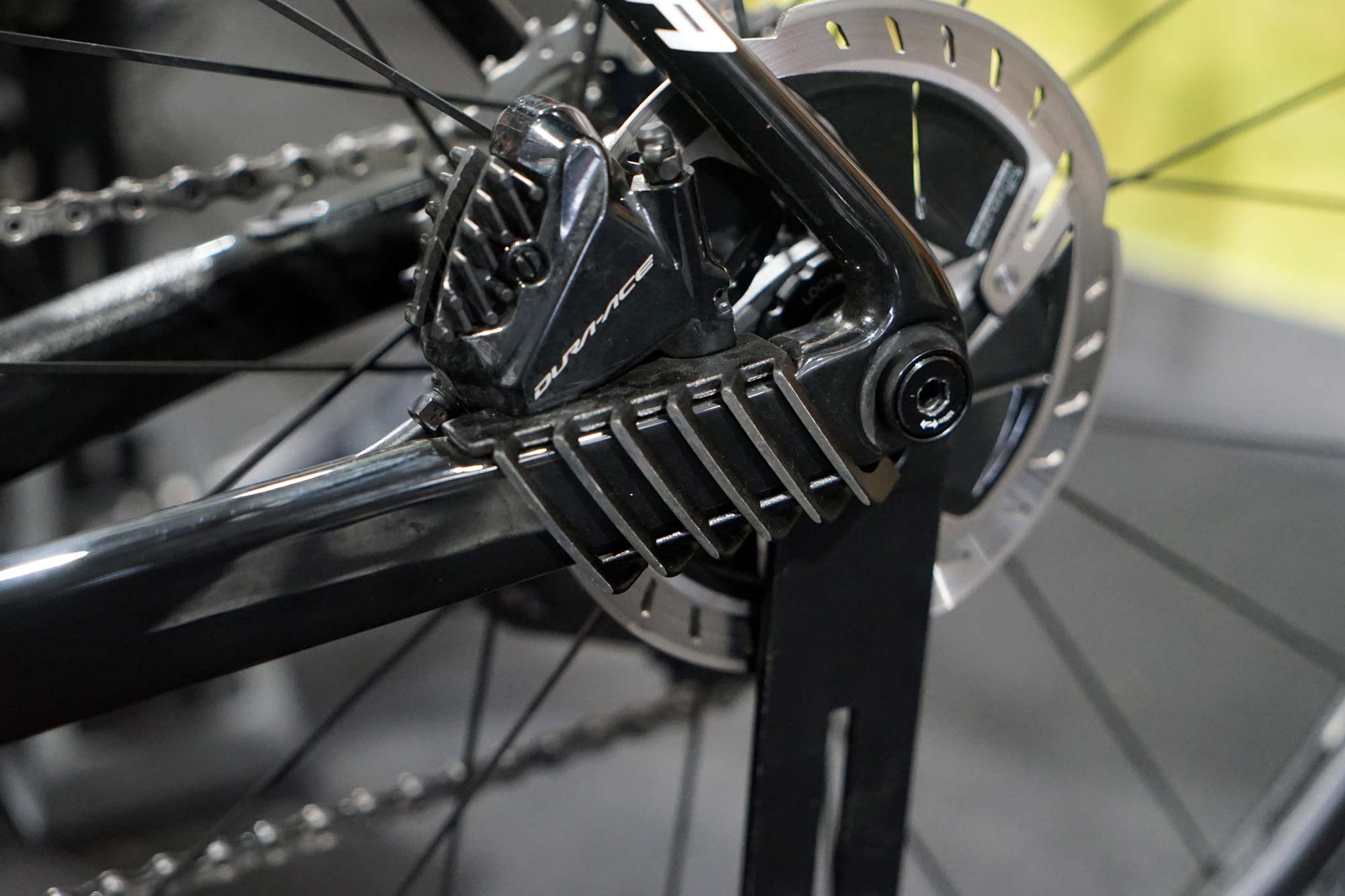 RIDE Media: I’m speaking with a Croatian mechanic from Bahrain-McLaren, Alan Dumic. We’re going to talk about the team’s Merida bikes. There are a couple of unique touches around the disc brakes, can you explain that?

Alan Dumic (mechanic, Bahrain-Merida): “Yeah, Merida also made this last year – we had it in the team – it’s a special cooling system that we have on the Scultura and the Reactos.

“On the Scultura, we have it on the rear disc brake. And on the Reacto, on the front brake.

“It’s designed to make the brakes a bit better, it makes them cool down faster.

“It gathers the air and steers it to the disc – the aim is to cool it down.” 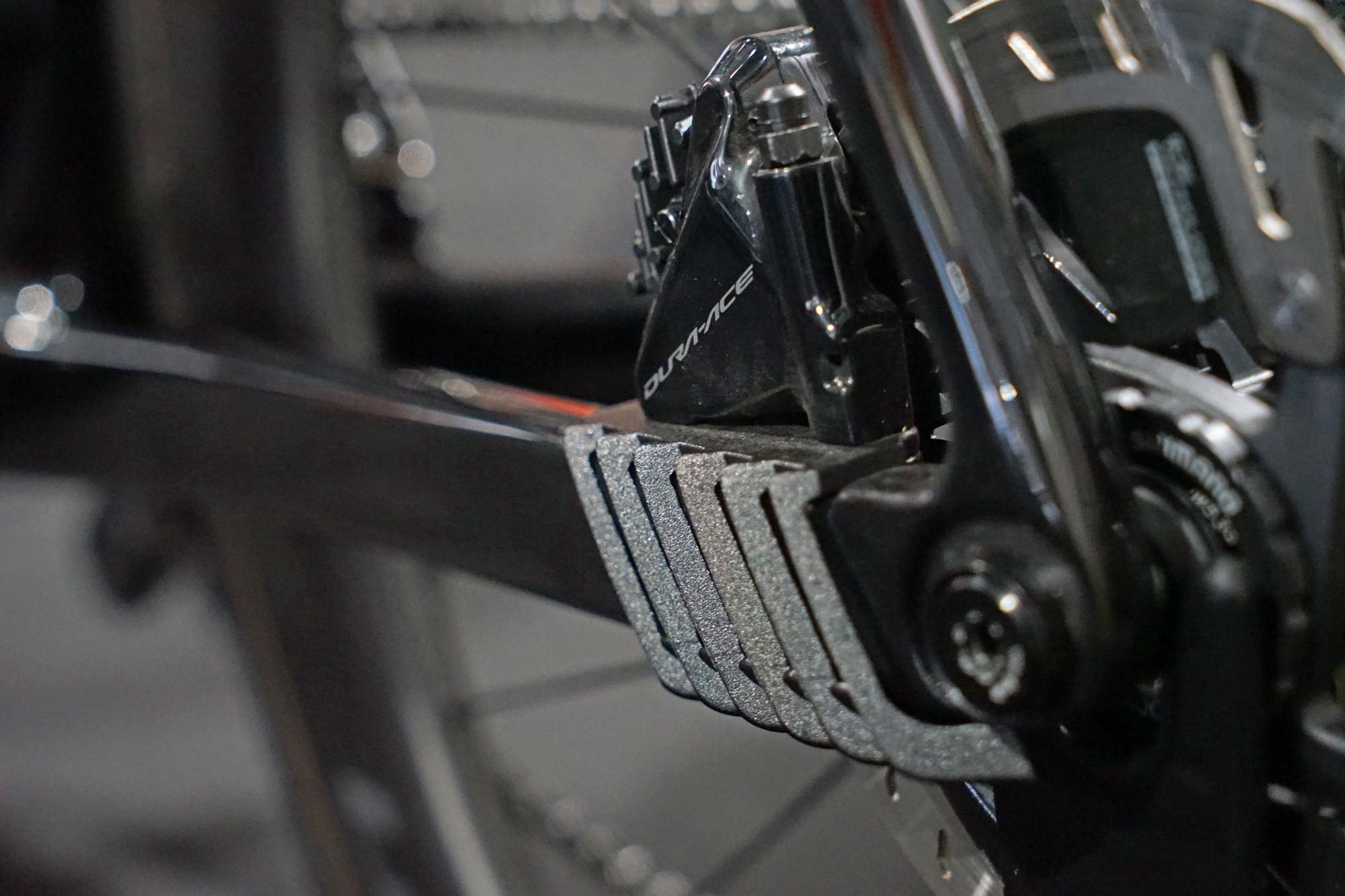 The ‘fins’ also feature on the rear of the Merida Scultura frame.

RIDE Media: Is this cooling system an innovation that came about because of the collaboration with McLaren or is it a Merida initiative?

Alan Dumic: “I think it started a little before because we had it before McLaren joined the team.

“Since we have just started with disc brakes last year, it was not seen around too much but as we’re using disc brakes on all our bikes this year, it’s more prominent.” 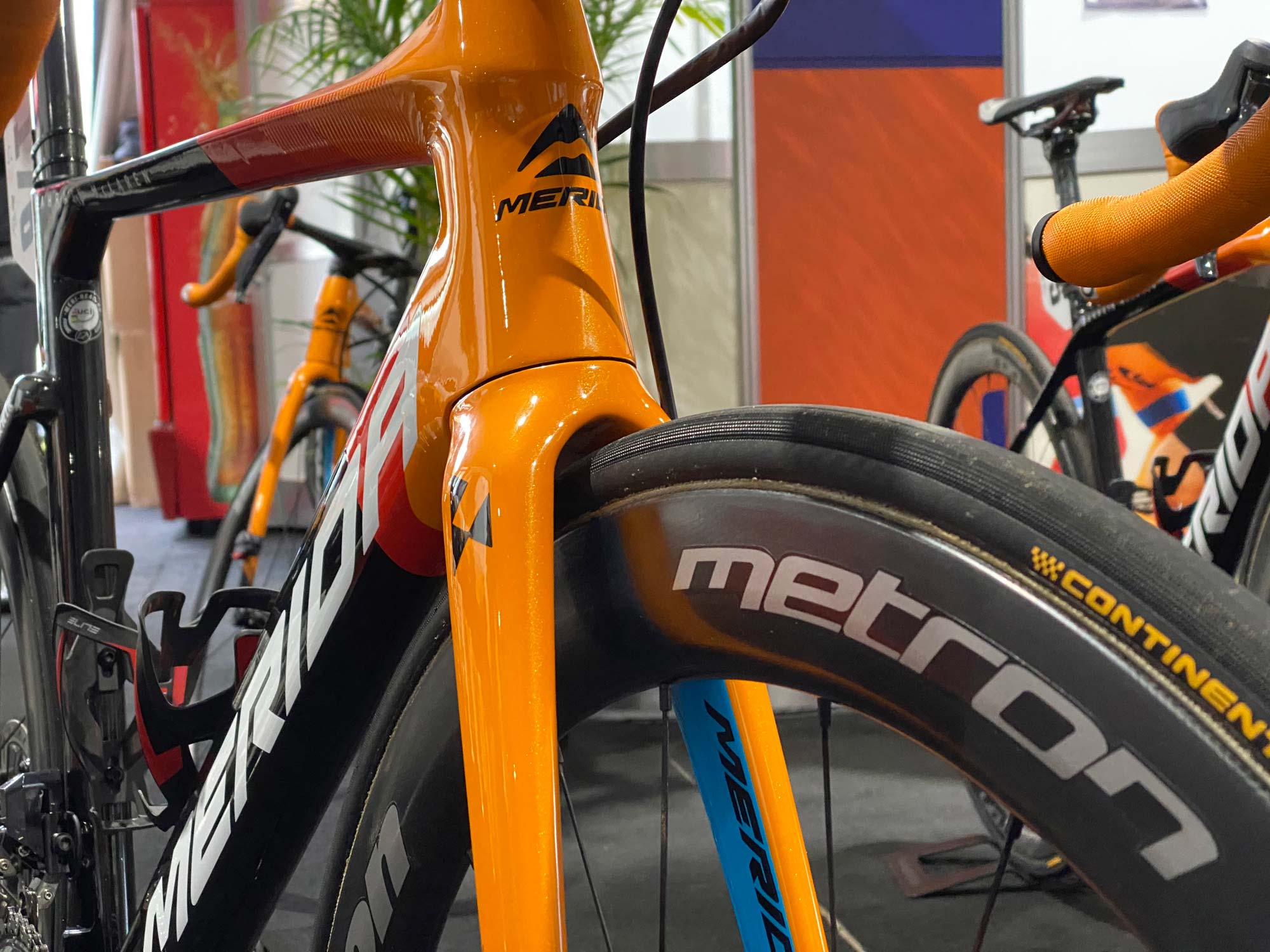 RIDE Media: And the fastening system to apply the calliper to the frame, is it the same as with the traditional Dura-Ace disc brakes?

Alan Dumic: “It is the same. It is still the Dura-Ace product, it’s only the addition of the ‘finned’ plate that makes a difference. It’s not difficult.”

RIDE Media: And what is the extra component made of?

RIDE Media: Is that available to consumers as well, or is it just a pro team initiative?

Alan Dumic: “To be honest, I don’t know.

“It comes with every bike we have for the team and that’s what is my concern. I’ve never investigated if you can buy it in a shop.” 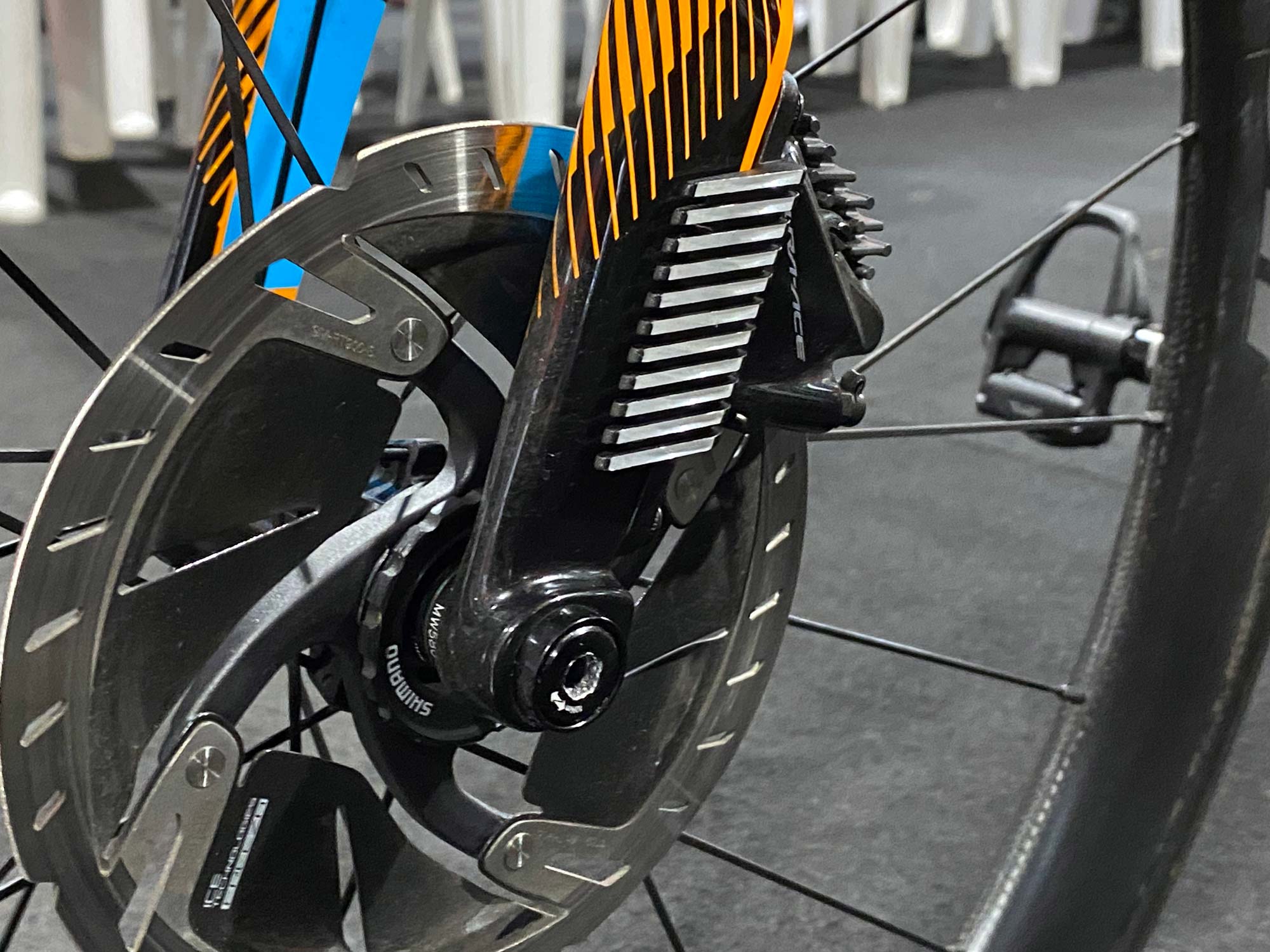 RIDE Media: Apart from this one obvious change [with the cooling system] is there much difference between the 2020 bikes and last year’s supply from Merida?

Alan Dumic: “For the frames, the geometry is mostly the same.

“There are some changes for the Scultura, as we have some lighter frames for the disc brake configuration. Fully built, they currently weigh seven kilograms.

“The other things are similar although we changed the wheel sponsor – to Vision in 2020, from Fulcrum in 2019.”

RIDE Media: You explained earlier that the cooling system for the rear was because the carbon-fibre lay-up on the Scultura had been amended, thinned down a little since the previous iteration…

Alan Dumic: “Yes, they added it to the new bikes because the frames are lighter this year than they were in the past. [Alan later explained that he has built a Scultura with disc brakes that weighed in at 6.8kg.]

“The intention is to cool the brake fitting down a little so that it doesn’t distort the carbon.

“We have just started racing with the disc brake bikes but so far we haven’t had any problems. We’ll see in the next few days how it goes in competition.

“On the long descents, when the brakes will get much hotter, it’s possible that the rotors buckle a little but I hope we’ve found the right solution.”