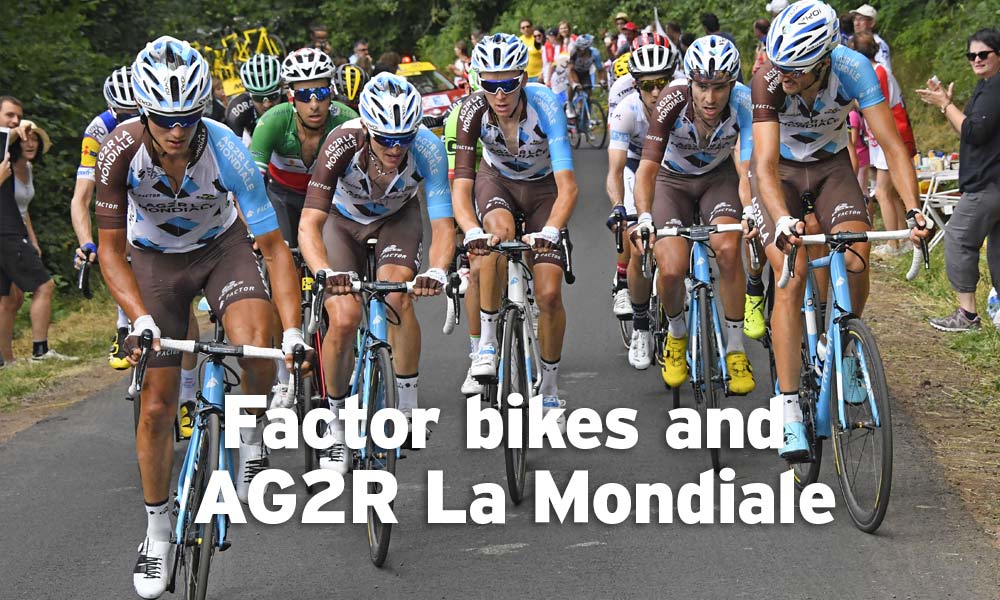 Bike sponsorship of a Tour de France team is an expensive exercise, but Baden Cooke says it provides a brand like Factor with a solid return on investment.

There’s an Australian connection to the French team that boasts one of the favourites for the 2018 Tour de France. Baden Cooke is a co-owner of the bike company that supplies Romain Bardet’s AG2R La Mondiale team. The business relationship began earlier than expected but the opportunity to get involved with a WorldTour squad was too good to refuse. After Factor’s first Tour de France, sales increased and Cooke is pleased that they took the gamble of providing 280 bikes… and a fair sum of cash.

“After Romain was third in last year’s Tour de France,” Cooke says, “the next month sales went up 500 percent and basically they haven’t dropped off since – they’ve only gotten stronger. We’ve now got around 225 dealers in 25 countries and we’re selling as many bikes as we can make.”

As we approach the Tour of 2018, a race in which Bardet is again expected to be prominent, we find out more about the relationship between AG2R La Mondiale and Factor. It’s another reminder that pro cycling helps the bike trade and that the Tour de France is good for business. 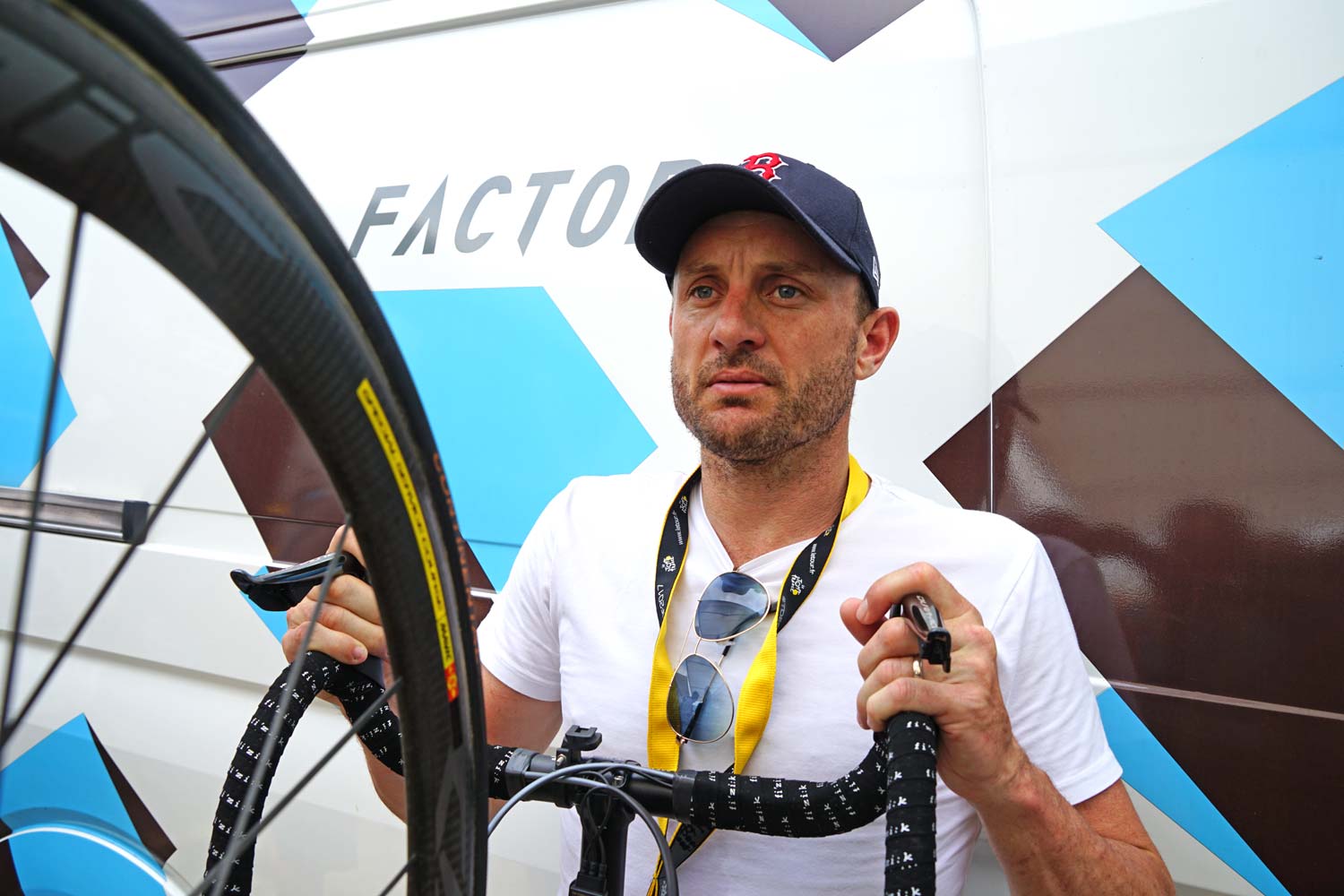 Baden Cooke (above) remains involved in cycling long after retiring from racing.

How the relationship began

“About four years ago Rob Gitelis and I bought Factor from bf1systems who are one of the world leaders in carbon-fibre manufacturing for Formula One cars, they also make parts for Bugatti, Lamborghini, Aston Martin, Ferrari… and the list goes on.

“They created Factor to showcase their skills. They made some of the most hi-tech bikes in the world, including the Factor Aston Martin 177 which sold for about AUD$50,000 at the time.

“When we bought the brand, we wanted to combine our race heritage into the technology that bf1systems had used on the bikes. So, we quickly went about making the bikes UCI legal, which they weren’t prior to our involvement.

“We set off and sponsored One Pro Cycling which, at the time, was a Pro Continental team out of the UK which had a good fit for us because the brand was born in Britain and the products were made in Britain for the first 10 or so.

“In that initial year of our involvement, in 2016, Romain Bardet went on to come second in the Tour de France… As the great French hope, he had the world at his feet and the team really wanted to give him every opportunity to win the race.

“They said, ‘What bikes do you want to ride?’ And he said, ‘I’d like to try Factor and a couple of other different bikes.’

“After the Tour de France he tried a couple of bikes, including Factor, over the next six weeks and then he decided that Factor was the bike he wanted to ride.

“In that first year, we were in our infancy. I think we had about 15 dealers globally selling our bikes – and, some would say, it was a little bit premature to take on a WorldTour team with a network such as that. It cost us a hell of a lot of money but once we started getting our sales channels set up, the sales went up very fast.

“After Romain was third in last year’s Tour de France, the next month sales went up 500 percent and, basically, they haven’t dropped off since – they’ve only gotten stronger and we’ve now got around 225 dealers in 25 countries and we’re selling as many bikes as we can make.

“Basically, every bike we make is straight out the door and sold.

“Now we’re just working on streamlining our factory because we’re one of very few brands globally that own our own factory and make only our own bikes in our factory. You could count on one hand the brands that do that; most brands make their bikes in other factories.

“At the moment, our factory is humming along pretty well and we’re hoping that the Frenchman can take the Tour win in 2018. He’s been second (2016), he’s been third (2017) and we hope he can take the top step this year and, hopefully, sales continue to grow.” 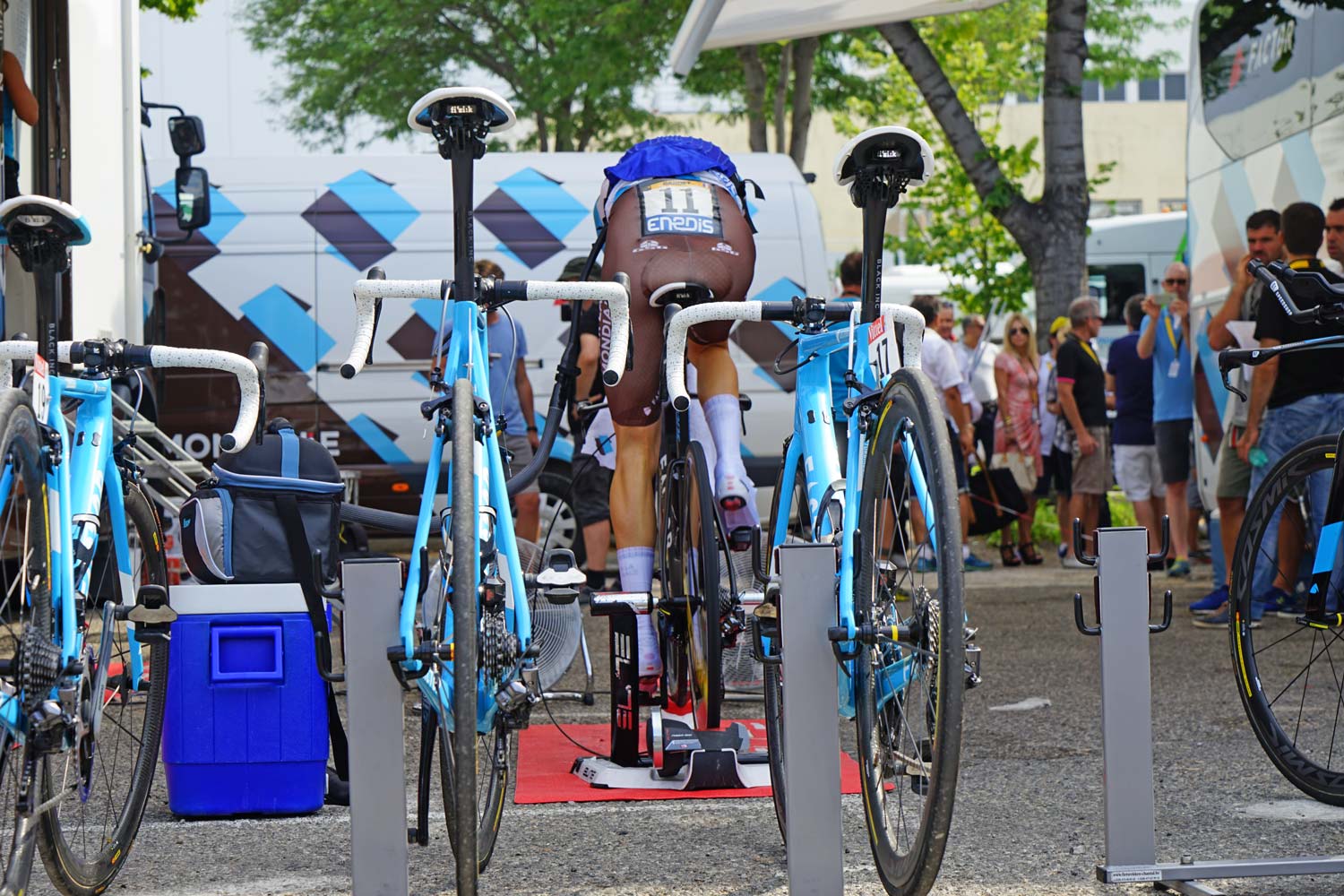 Tally of product for a season

“The team gets 280 complete bikes from us each year. We supply everything except the wheels – they are supplied by another team sponsor, Mavic.

“Our commitment to AG2R La Mondiale includes the AG2R under-23 team so a small portion of that haul of bikes – about 50 – goes to the development program. We like to support the up-and-comers as well. A couple of the under-19 AG2R riders also have Factor bikes but we are not an official sponsor of that team.

Blue frames for most of the team… while Bardet raced a special white one in 2017.

“It’s not‘largely a product supply partnership’, unfortunately. There’s also a considerable cash component to the relationship. It’s not exactly appropriate for me to say how much it costs but what I can say is this: I believe the most expensive WorldTour team would receive, from their bike sponsor, a package deal that’s worth about six million euros per year (±AUD$9.43m) and the cheapest team in the WorldTour would have a package deal worth two million euros (±AUD$3.14m).

“Our agreement with AG2R La Mondiale is akin to something in between those figures.” 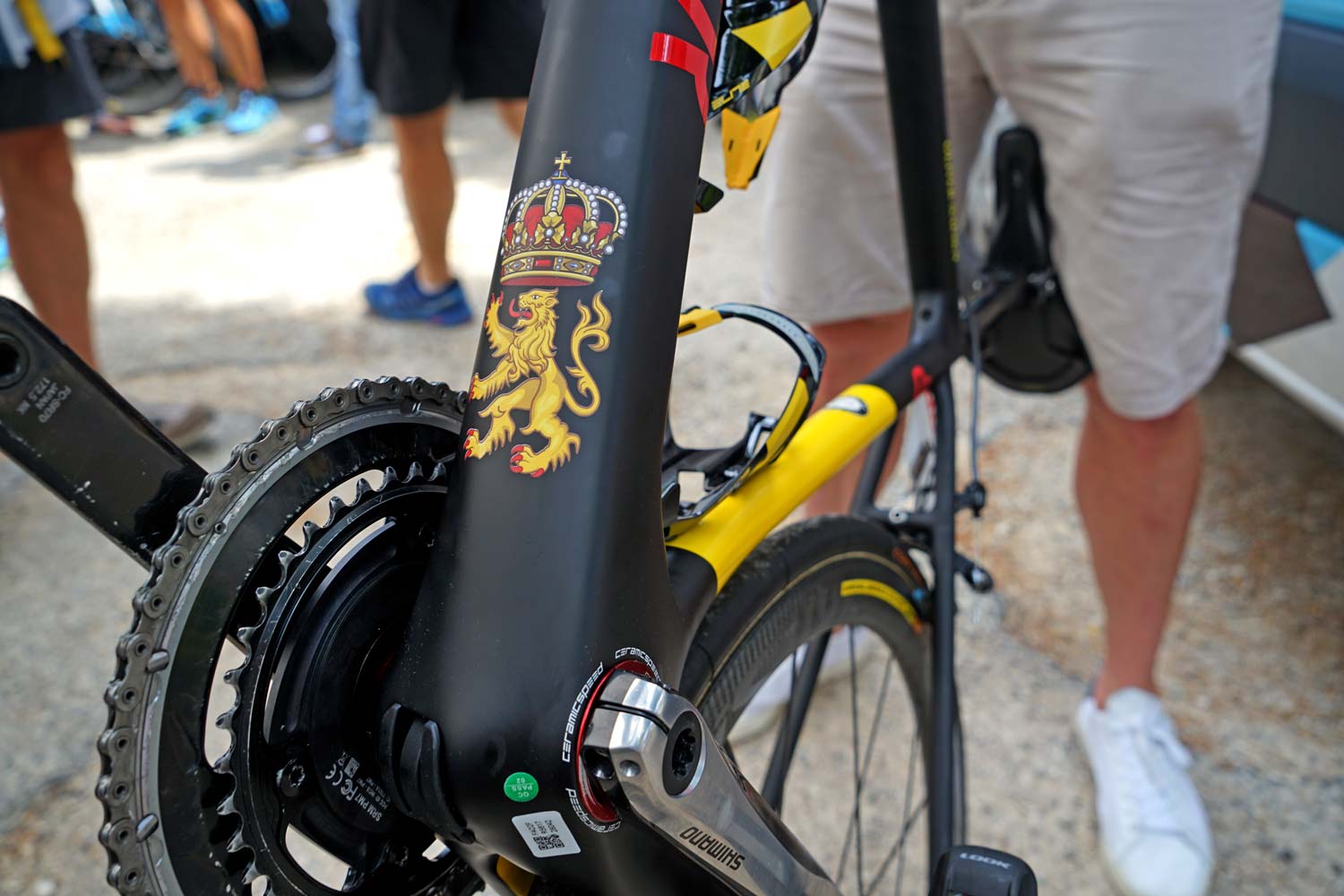 Oliver Naessen, the 2017 Belgian champion, got a special edition black frame after winning his title.

“It might sound a bit cheeky, but our bikes are delivered pretty much spot-on. [Laughs]

“All we hear back from the riders is compliments; I’m not joking, it’s actually the truth.

“No project can be perfect, and we get a bit of feedback and we have made some adjustments, but they are very minor details. Basically, the riders love the bikes and they insist that the team stays on Factor into the future… and, right or wrong, the boys at AG2R believe that they have an advantage, that they are on the best bikes.

“It’s not up to me to tell you they’re the best bikes but that’s the feedback I’ve been given.

“When the team first switched over to Factor, Romain’s main issue with change was that he wasn’t confident on the time trial bike – and he wasn’t happy with the weight of his previous bike. We took his previous bike and compared it with our time trial bike in the wind tunnel in Geneva; our bike was two full kilos lighter and, over 40 kilometres – according to the wind tunnel results – ours was one minute quicker aerodynamically, and that’s not taking into account the two kilos. That’s a gigantic difference.” 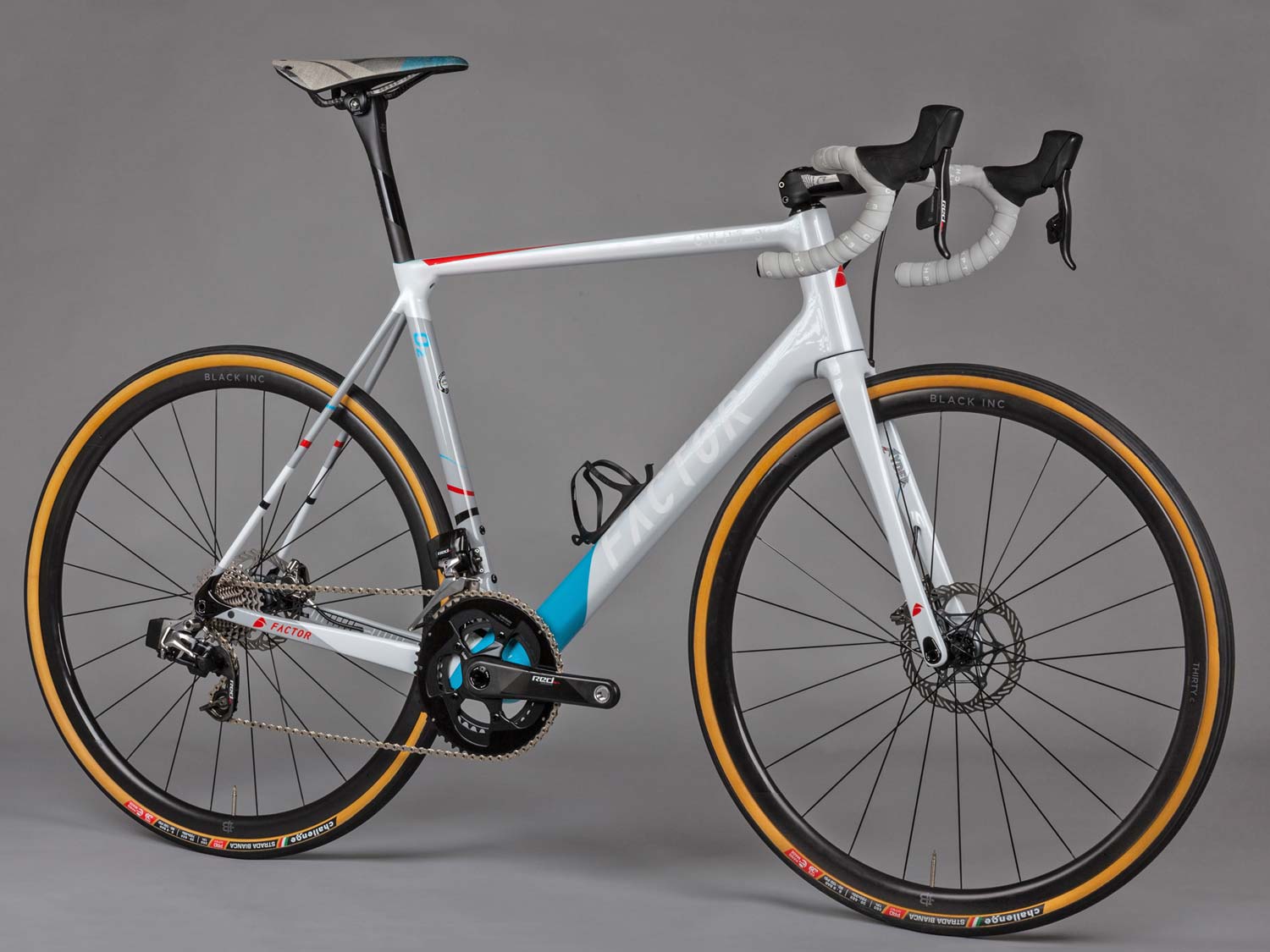 As most road bike brands have done in recent years, Factor has developed a disc brake product for their line-up…

“I think it would have been ideal if we had all our sales channels set up a little better before we got involved with the team last year it would have been ideal. It was all a bit rushed but I’m glad we took the chance. We had so many people ordering bikes and then having to wait for them to be delivered. They were probably waiting a little too long because we were under the pump – the factory was going as hard as it could, and we couldn’t make enough bikes to service demand.

“Probably a few people got annoyed, but it was better than nobody wanting the bikes.

“In an ideal world, we would have come into the WorldTour this year (instead of at the beginning of 2017). However, the opportunity arose when it did and we either had to take it or not take it.

“Had we not taken it, the opportunity would not be there this year.

“We had to jump on it and, between Rob Gitelis and myself – the two owners – it was a decision we made and we’ve had to suffer. Financially, we had to put all eggs into this basket – all in, so to speak. It has definitely paid off.

“We may have done things differently if we got our time over again but you can’t choose when these opportunities arise. We’ve got a potential Tour de France winner riding our bikes and promoting our bikes – and loving our bikes – so you’ve just got to grab a chance like that and go with it.” 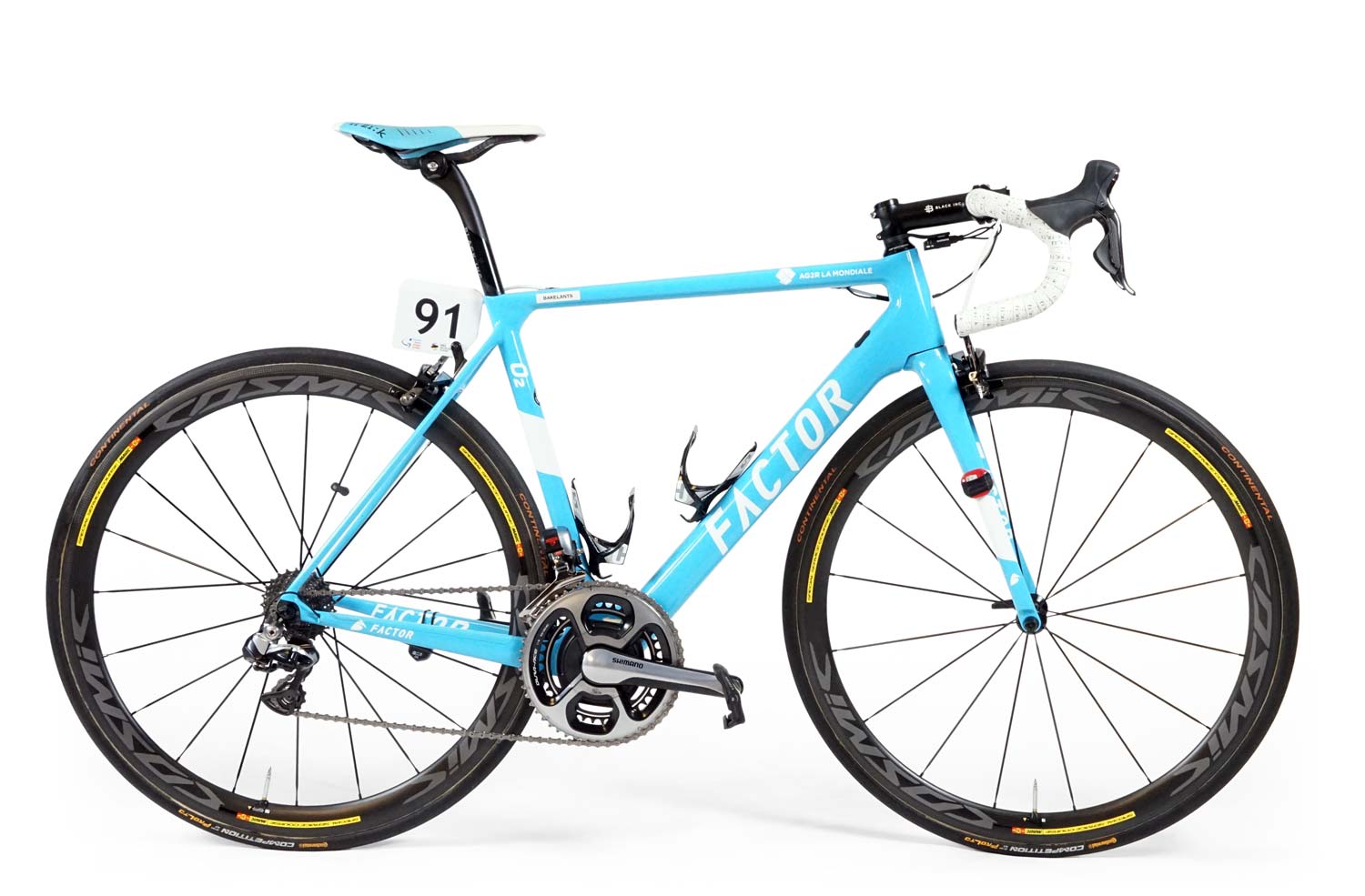 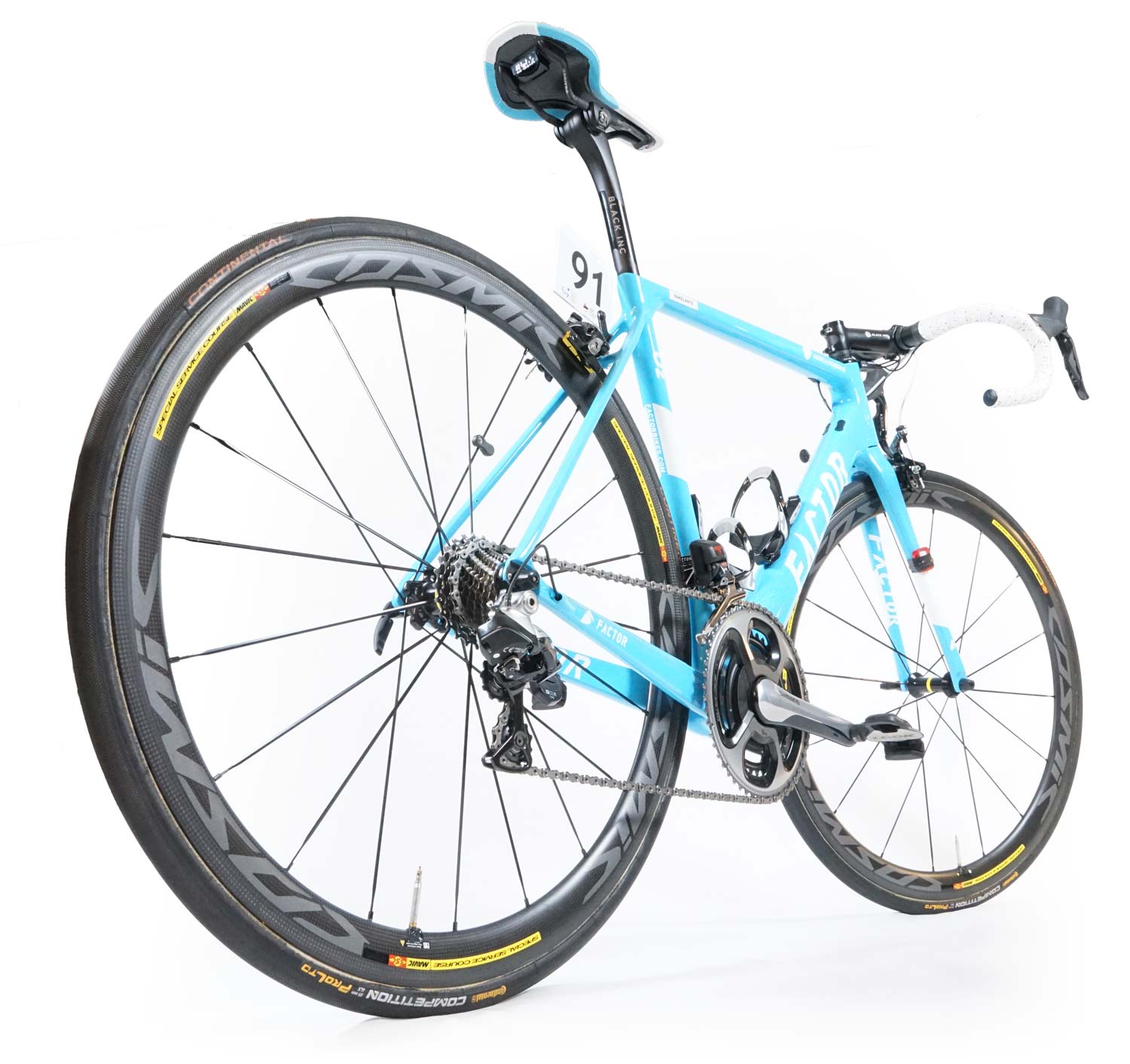 “First and foremost, it’s my heart that tells me Bardet can win the Tour in 2018. But I do believe he’s got a chance.

“I probably don’t believe he’s The Favourite, but I would be very surprised if he’s not on the podium.

“The pavésection into Roubaix will be critical and I think Romain has the skills to do relatively well. If he starts, Froome can ride the pavéwell enough to manage that challenge; he’s got a mountain bike background. Vincenzo Nibali, even though he’s shown nothing yet, has a few tricks up his sleeve and he’ll come good. And Geraint Thomas could put 10 or 15 minutes into Nairo Quintana on that single stage into Roubaix – ‘G’ can win the stage! Think about it: he’s been top-10 in Paris-Roubaix. He’ll be trying to take time that day.

“When he was at the Dauphiné, Nibali knew that the big mountains of the Tour were a month away and I think he’s just foxing. I wouldn’t write him off at all.

“Bardet canride a bike! Although he doesn’t have a huge amount of power, I think he will limit his losses on Roubaix day. And I think AG2R shocked a few at the team time trial in the Dauphiné by riding so well. They were still missing a couple of their key riders early in June, such as Silvan Dillier who is a two-time world team time trial champion.

“I think AG2R are going to go better than expected in the team time trial. There’s no prologue. And there’s only a 31km time trial at the finish of the race.

“Obviously, to win the Tour de France, Bardet is going to have to have a minute – at least – going into the final time trial.

“They are not scared of Sky, a team which as probably got three times the budget of AG2R – and obviously Sky has got inferior bikes going against them [laughs] – but I think everyone knows that AG2R bat above their average when it comes to July. 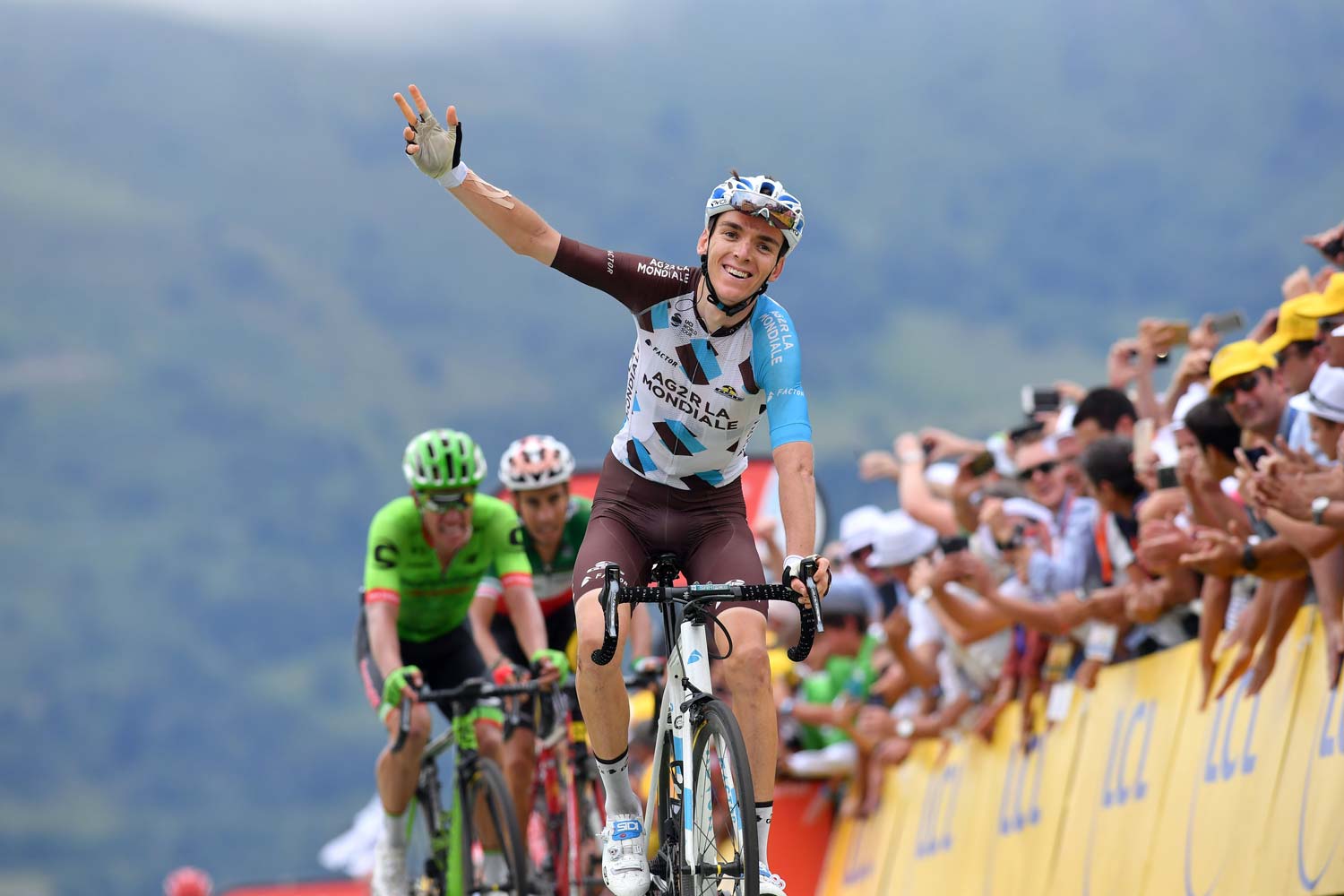 Factor scored a stage win in its Tour de France debut courtesy of Romain Bardet at Peyragudes (above).

RIDE Media will be at the Tour de France again in 2018.
Be sure to follow us in July for more insight from the race and the people involved.