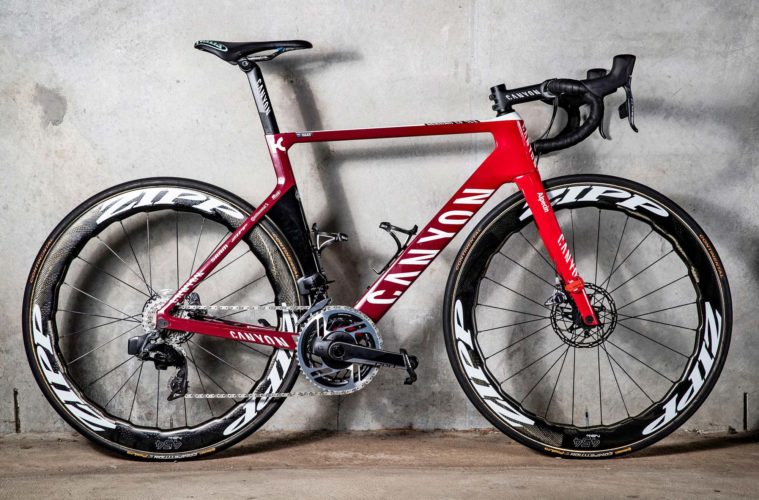 Katusha began its association with Canyon bikes in 2012 and the Swiss-registered squad continues this relationship in 2019, one of two teams in the WorldTour riding the German brand…

Canyon supplies both Katusha-Alpecin and Movistar with bikes in 2019. The German company has established a direct-to-consumer retail model which has been refined over the years and introduced to the Australian market in 2016.

There are two key frame options for riders on the pro team, the Ultimate or Aeroad.

Of all the bikes features in the team pages of the Official Tour de France Guide (2019 Australian edition), those from Katusha-Alpecin and Trek-Segafredo were the most difficult to procure early in 2019. There was an embargo relating to the release of SRAM’s eTap AXS wireless shifting ensemble that ended in February… and, even though it was widely reported on in the cycling media, these two teams were forced to be more protective of their bikes than usual.

The images below show one Canyon bike from each of the eight seasons which this brand has been raced by Katusha.

Be sure to get your copy of the Official Tour de France Guide (2019 Australian edition) – in shops around Australia from 17 June 2019.

RIDE Media documented the bikes used by the pro peloton for many years: photographing, weighing and analysing the differences from one season to the next. The images above help illustrate the progression of equipment and different allegiances with product suppliers.

We will sporadically be posting overviews of the bikes used by various teams in the pro peloton with online galleries such as this one.

Also, be sure to follow us on social media where you can find short clips showing the time-line of bikes used by teams over the years.

The #bikes of @proteamastana from 2011 to 2019: see the sequence of colour (and brand) changes... and note one constant, @corimacarbone wheels (except for 2017). #cycling #teambikes #Astana #ridemedia #flashback