As a loyal domestique to the greatest cyclist of all, Joseph Bruyère enjoyed plenty of success during his career, celebrating the wins of Eddy Merckx… but also a few of his own.This bike from the Wielermuseum in Roeselare represents a turning point in time for cycling. 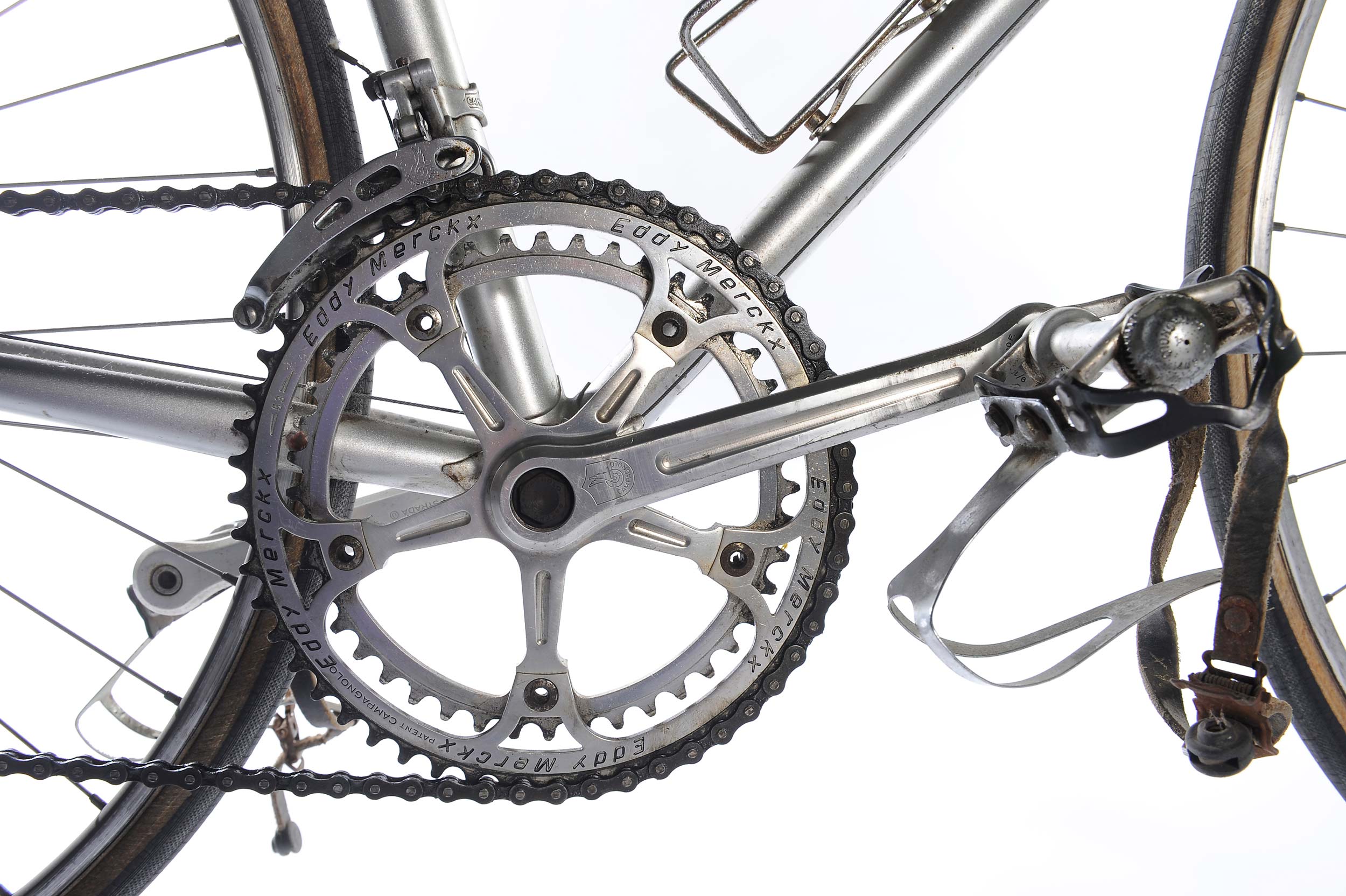 Pantographed ‘Eddy Merckx’ chainwheels are now keenly sought after. Stamped ‘Patent Campagnolo’ indicates it was produced before 1978. After this, it was ‘Brev Campagnolo’. This one was probably pantographed as part of a job lot some time after 1978, and then added to the crankset when required. The date code on the left-hand crank reads ‘Strada O’ with a zero inside the ‘O’. This indicates that it was produced in 1980. The chrome-plated crank caps are not missing: they were not generally used on serious bikes.

Although Joseph Bruyère was not a household name, for avid followers of the European cycling scene he was a constant presence for all of the 1970s, with 11 seasons of consistent results. We will look at some of his more significant achievements later, but without doubt Joseph’s main claim to fame was as a loyal domestique to the Grand Master himself, Eddy Merckx. Had the term been in common use in the 1970s, he would have been called a super-domestique.

Bruyère was not a sprinter or lead-out man, but rather a strong climber and an excellent TT rider, finishing well up in the prologues of the major tours, and being a strong contributor in the all-important team time trials. 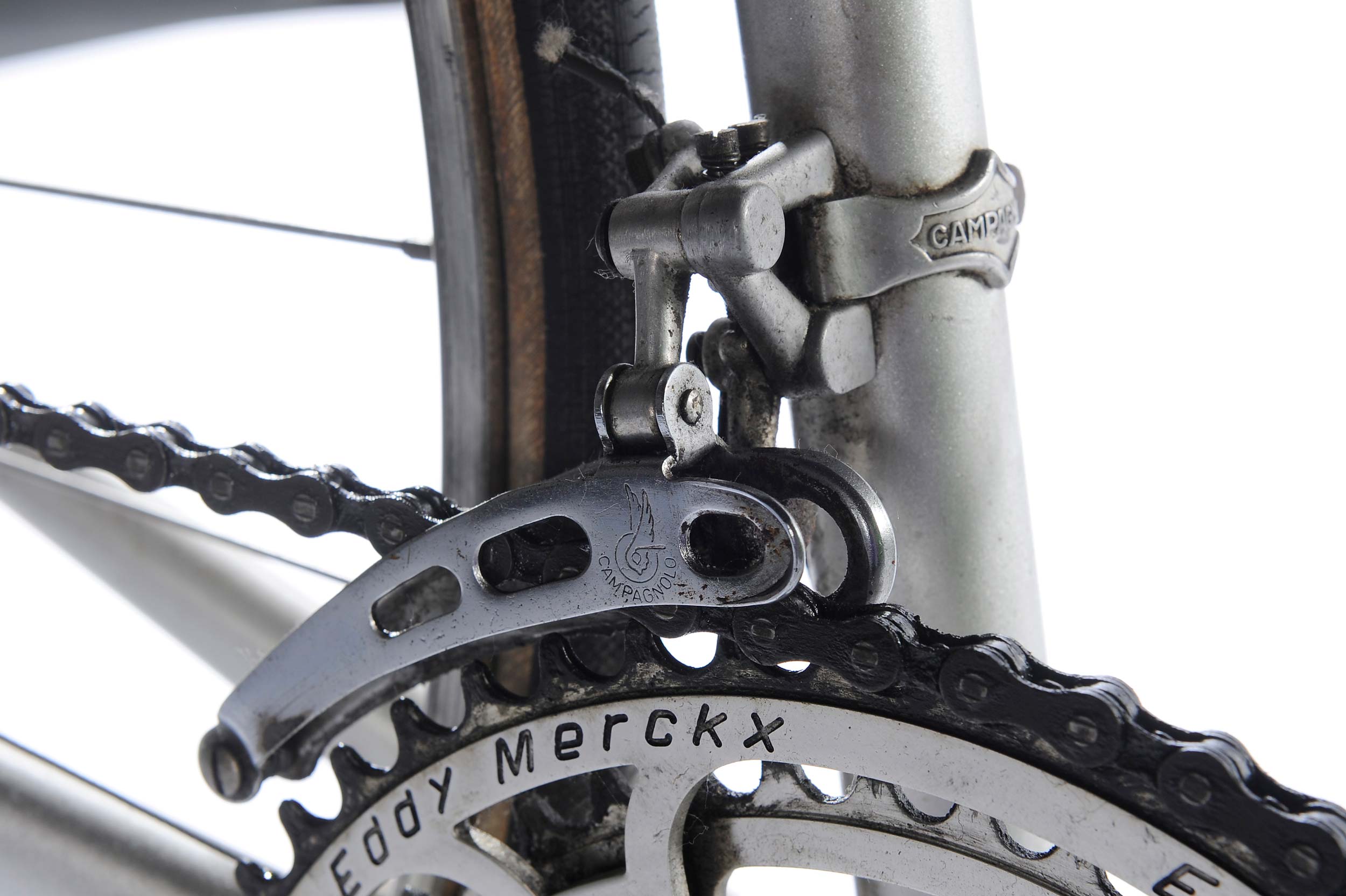 This particular version of the Campagnolo Super Record front derailleur came out in 1979. The 1978 equivalent had four holes and a more generic frame clamp. It remained almost unchanged until 1985, but the polished aluminium arms were anodized black after 1982.

When I received the photos of our silver feature bike, it was an uncanny coincidence – one of those instances that has you wondering about fate… at least for a few moments.

Early 1980s Merckx bikes had been my pet topic and, in the few weeks prior to being asked to write about this bike, I had only just finished restoring a 1985 Eddy Merckx with third-generation Campagnolo Super Record for a customer. Furthermore, I had also recently added two more Merckx bikes to my personal collection. In fact, a silver 1981 model almost identical to our feature bike had arrived only the week before, and I had just completed a nut and bolt rebuild on it.

Our feature bike is on display at the Wielermuseum in Roeselare, Belgium, and is simply labelled ‘Joseph Bruyère’s bike’.

At first glance it appeared to be almost identical to my own, but closer inspection revealed that it was not quite the same as any of the early Merckx factory bikes I had seen. 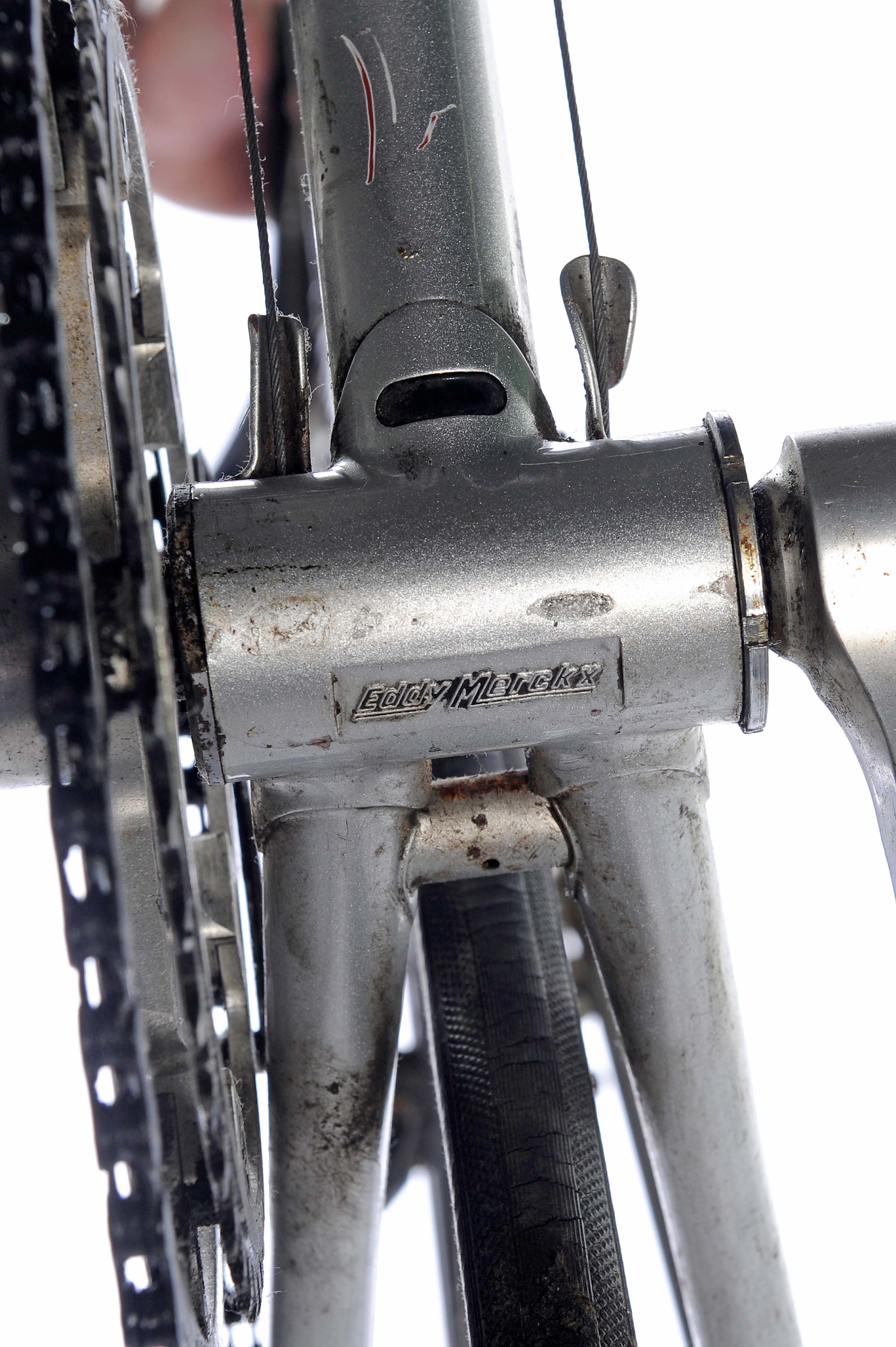 The bottom bracket shell with ‘Eddy Merckx’ cast into it is a unique feature of this bike. If anyone else has a Merckx bike with one of these, please write in and tell us. The serial numbers of production frames normally appear here, and the lack of any numbers indicates that this is an actual pro team frame, not a ‘team’ specification frame sold to a member of the public.

I started delving into the pre-production bikes, and found a porridge of conflicting information.

There must have been many variations in lugs and tubing used early, before they settled down into larger scale production.

Further investigation revealed this to be the case, but while investigating the nuances of Merckx frame identification, I became sceptical as to whether Bruyère actually raced on this particular bike. 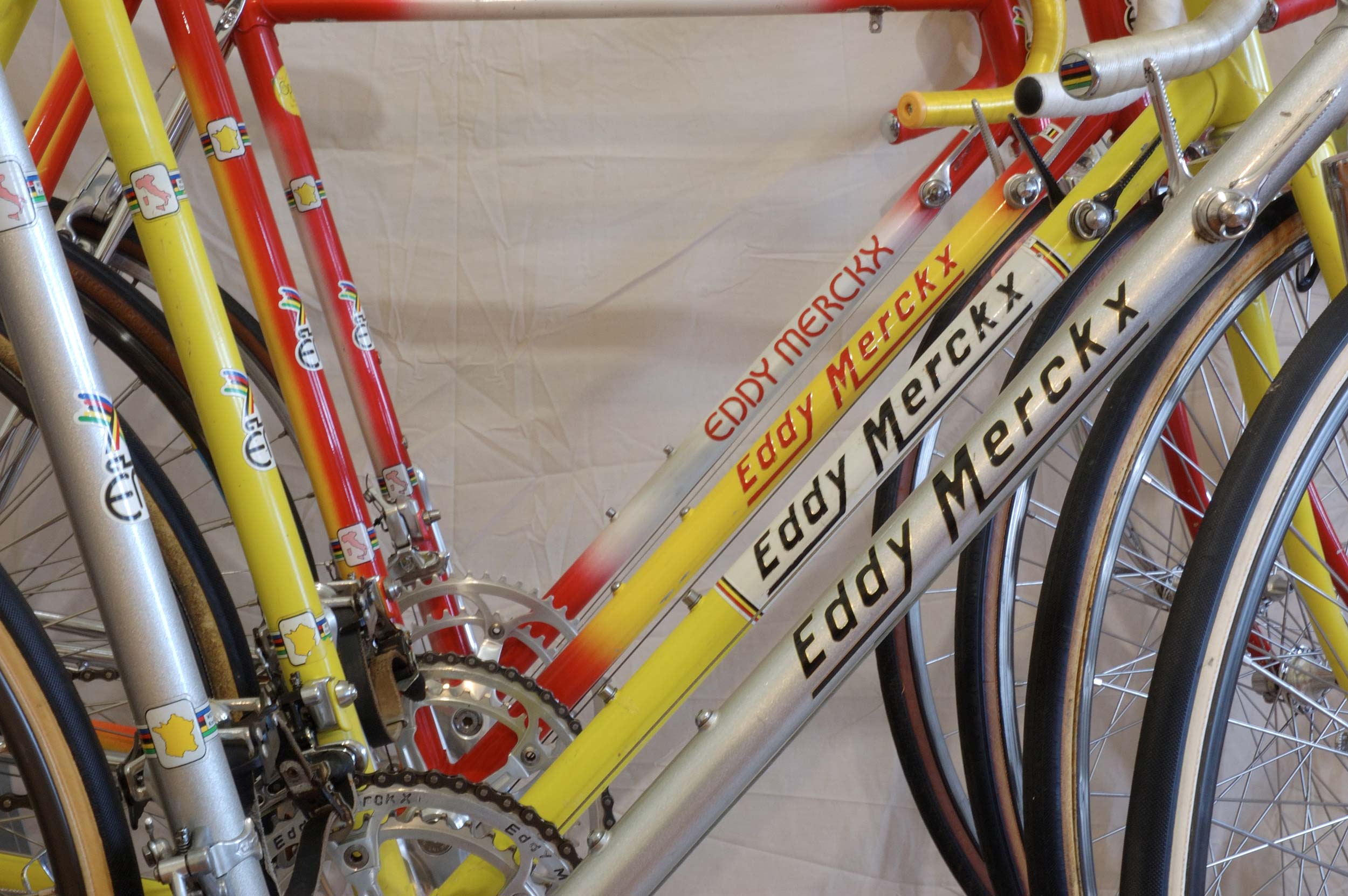 The Author’s collection… Warren Meade lined up some of his Eddy Merckx bikes to show the changes in logo and finish from over the years.

Bruyère first raced with Merckx on the Faema Team in 1970 then, after six years with him on the all-conquering Molteni squad, spent a further year together at Fiat.

Joseph lined up with Eddy again in 1978, this time for the newly formed C&A team.

To put it more correctly, Bruyère was riding for Merckx, who was the C&A team.

With a different structure to most other teams, C&A was essentially sponsoring Merckx, and he was to select the riders and pay the team out of that budget. But after an off-season beset by illness and turmoil surrounding sponsorship arrangements (Wilkinson Sword had pulled out of sponsoring the team at the last moment), Eddy called it quits on 18 May 1978, having started in only two races.

When Merckx decided so early in the season that he just could not race any more, he stayed with the team in a support role, out of a sense of obligation to the sponsor and the riders he had engaged. High on the list of such riders was Bruyère. 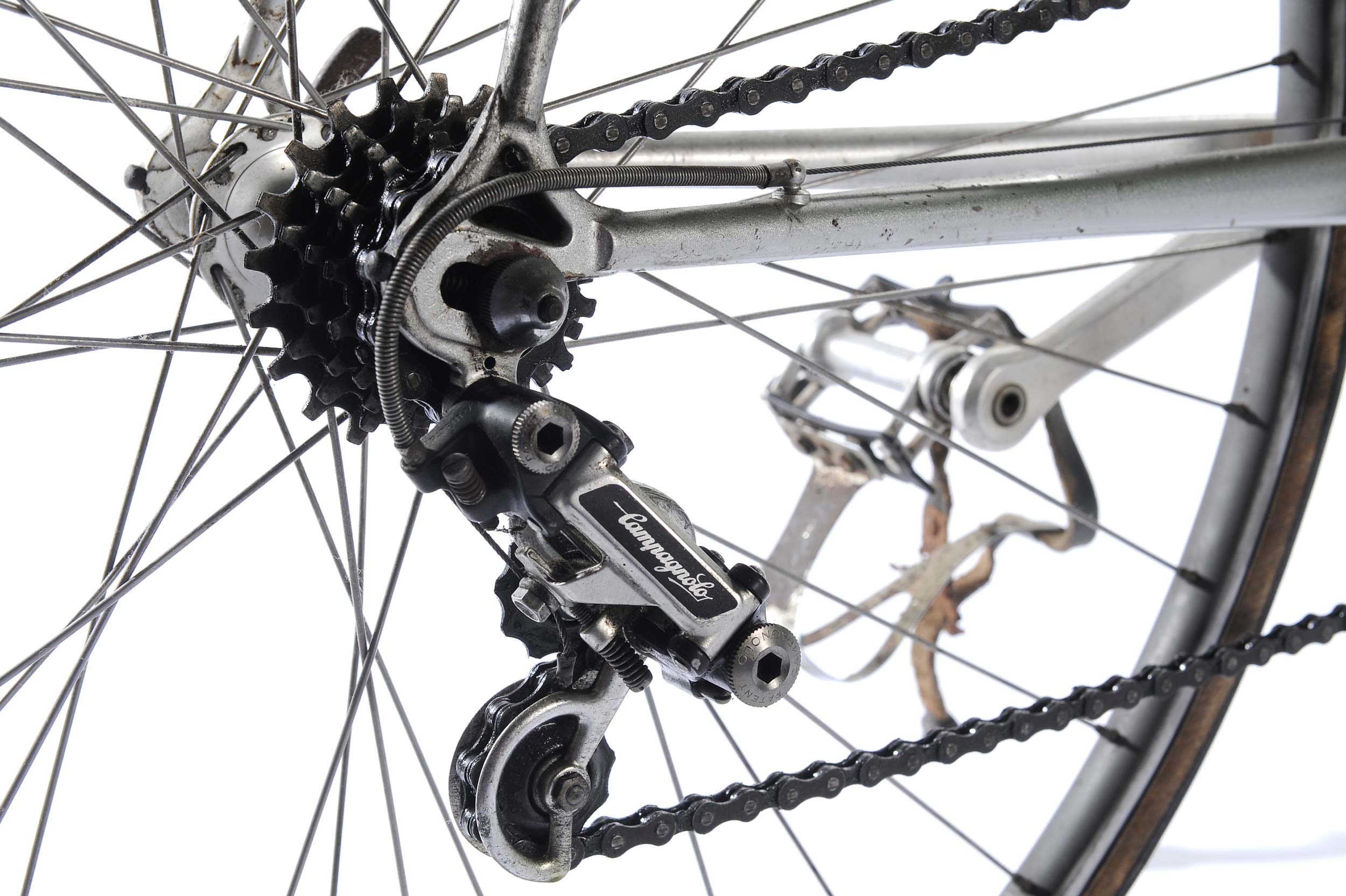 A second-generation Campagnolo Super Record derailleur, released in 1978. Note the titanium pivot bolts. There is a date code on the top pivot mount, which says ‘Patent 79’. This is equipped with the special Campagnolo Porta Catena dropouts, also released in 1978/79, but used for a few years after that.

The long-time domestique for the ‘Cannibal’ was already stepping up as his boss retired.

Bruyère was second overall in the early season Tour Méditerranéen, he won Liège-Bastogne-Liège in April, and then had a barnstorming Tour de France.

After years in the shadow of Merckx, he was now being coaxed, coached, mentored and spurred on by the Master himself, who sat out the Tour but followed in the C&A team car.

On the strength of an encouraging fifth place in the prologue time trial, second in no less than four stages, third in another, and fourth in yet another two, he wore the yellow jersey for eight days! Slipping slightly towards the end, he finished a career-best fourth overall, just nudged off the podium by the big names of Bernard Hinault, Joop Zoetemelk and Joaquim Agostinho.

Joseph Bruyère went to ride for the Flandria team in 1979, and had his least successful season ever. It was the only year he had not ridden an Eddy Merckx bike.

Biased fans of the Merckx brand may suggest that his poor season was ‘all about the bike’, but it was in fact due to ill health, a severe case of conjunctivitis, with major complications, keeping him out of the peloton for the middle five months of the year, which – in that era at least – effectively meant the entire season. 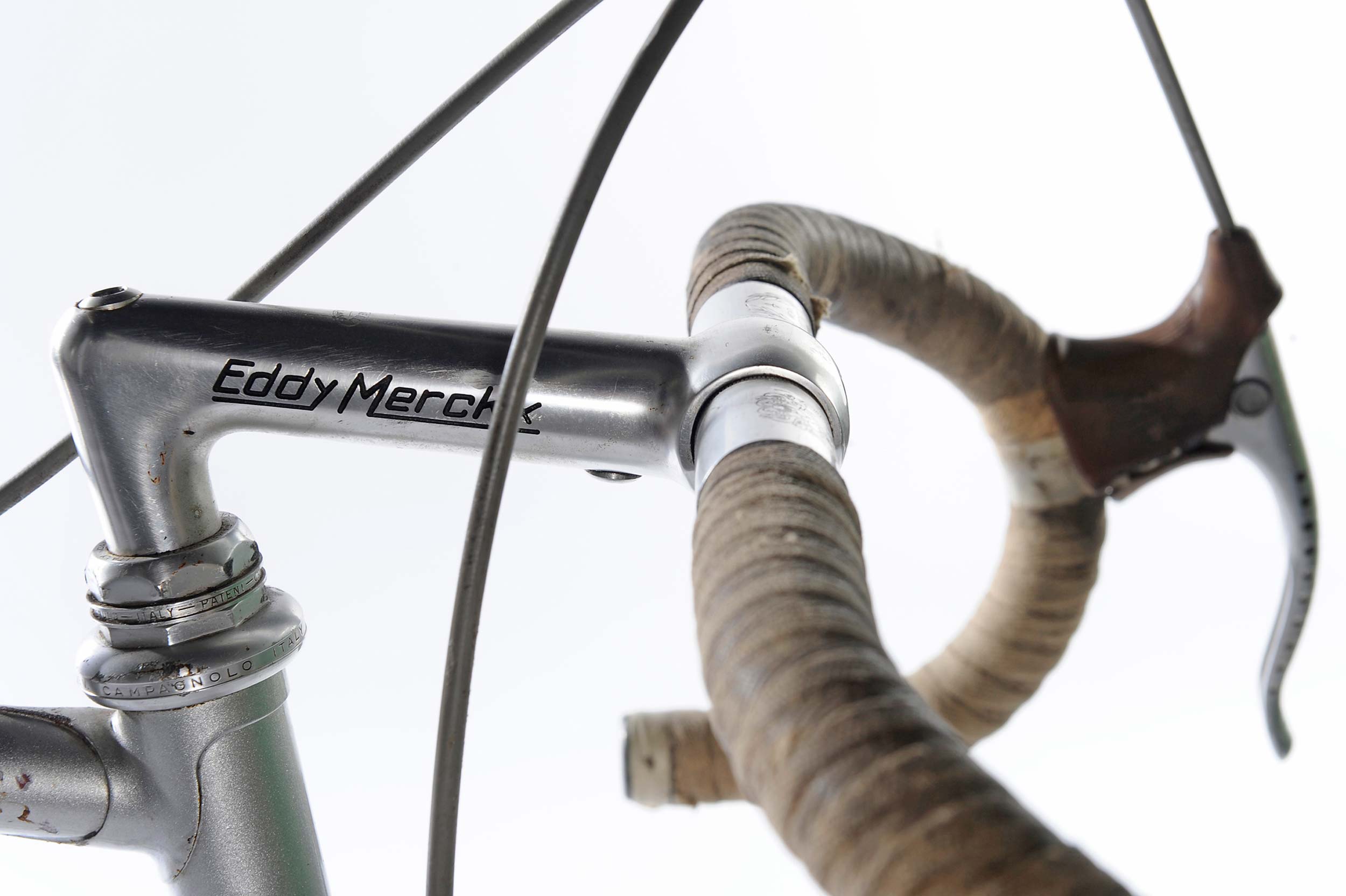 Cinelli 1R stem with hidden expander bolt was aerodynamic and elegant. The Eddy Merckx pantographing mimics the decal style on the down tube.

After a year in the wilderness at Flandria, 1980 saw Joseph signing for a new team, Marc Carlos VRD. Merckx himself had spent a year in a different kind of wilderness – the strange headspace in which many elite sportsmen find themselves in when they retire from competition.

But they both bounced back in 1980, Merckx by opening his new bike factory in his hometown of Meise, in Belgium, and Bruyère by winning the opening Classic of the season, Omloop Het Volk. In the manner of his old boss, he won it from the front, in a lone breakaway. This victory was no gift from a grateful leader, or a tactical masterstroke, as his team was nowhere near powerful enough to orchestrate such things.

This was Bruyère’s third victory in the event (having won it previously in 1974 and 1975), so it shouldn’t have been a surprise to anyone, but on the previous occasions he had the benefit of being a member of one of the all-time great formations, Molteni. 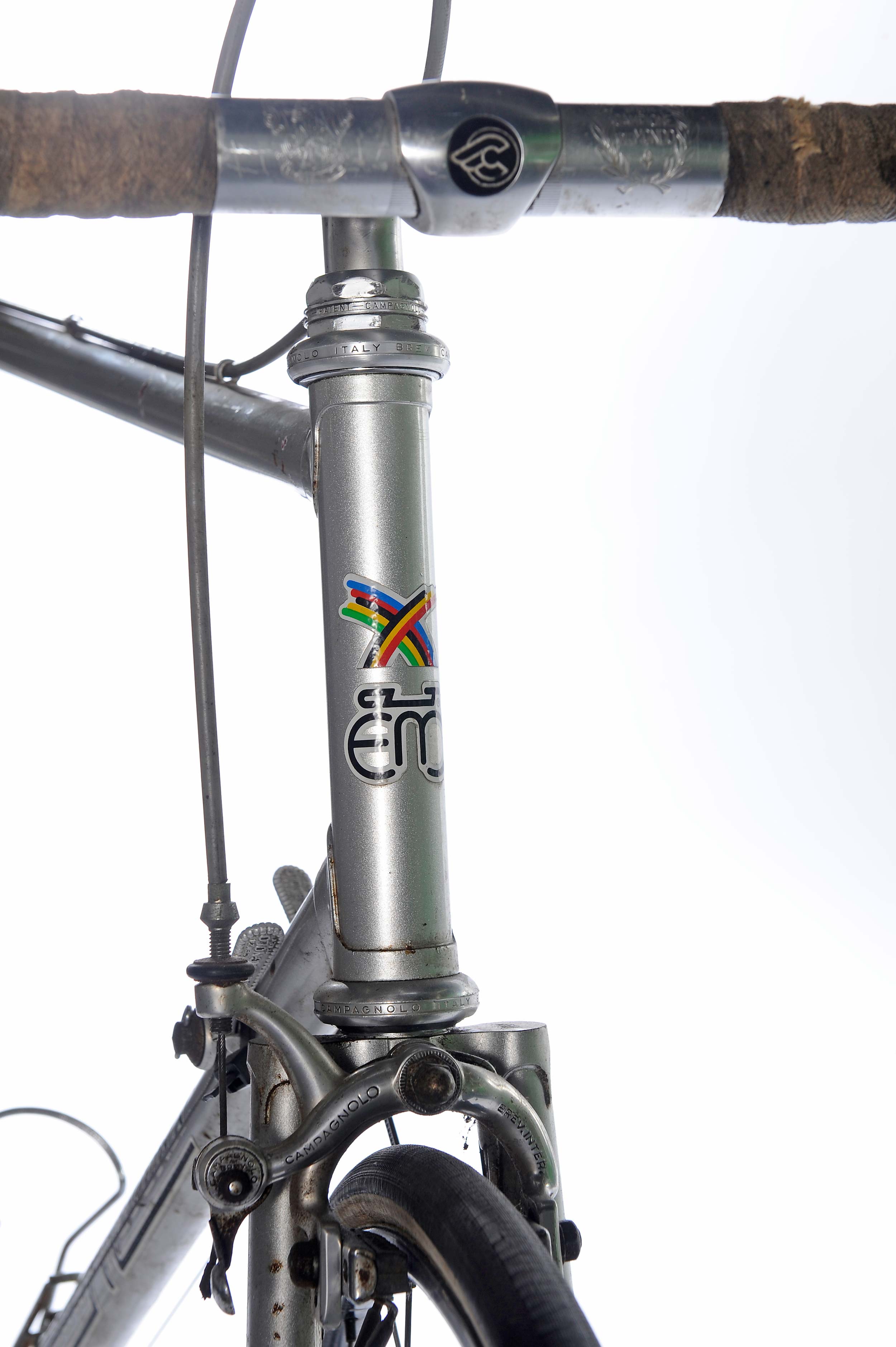 The decal is in two pieces, but uses the same artwork as the one-piece head tube decal that illustrated Eddy Merckx frames well into the 1990s. Is this a prototype of the actual decal adopted later?

The Marc Carlos VRD team list of 1980 reads a bit like a roll call of displaced men. Not that there wasn’t talent there, for there was plenty. But a Tour de France-winning combination, or a one-day Classic powerhouse, it was not.

Bruyère was joined by such non-roadmen as six-day track specialists Patrick Sercu and Australian Danny Clark – actually both were more than competent roadmen when they turned their minds to it, but they made enough money on the track to not have to concern themselves with bitumen too much. The roster also included Roland Liboton, and he kicked off the first of his four cyclo-cross world championships.

Journeyman Australian professionals Peter Delongville and Gary Wiggins (father of Bradley) were there, as was 1980 Tour de France lantern rouge, Gerhard Schonbacher (yes, the promoter of the Crocodile Trophy MTB race in Australia.)

Well-credentialed men on the team included Lucien van Impe, the 1976 Tour de France champion (and six-time King of the Mountains), and a 24-year-old Frank Hoste, who would later win Gent-Wevelgem and the Tour’s green jersey. 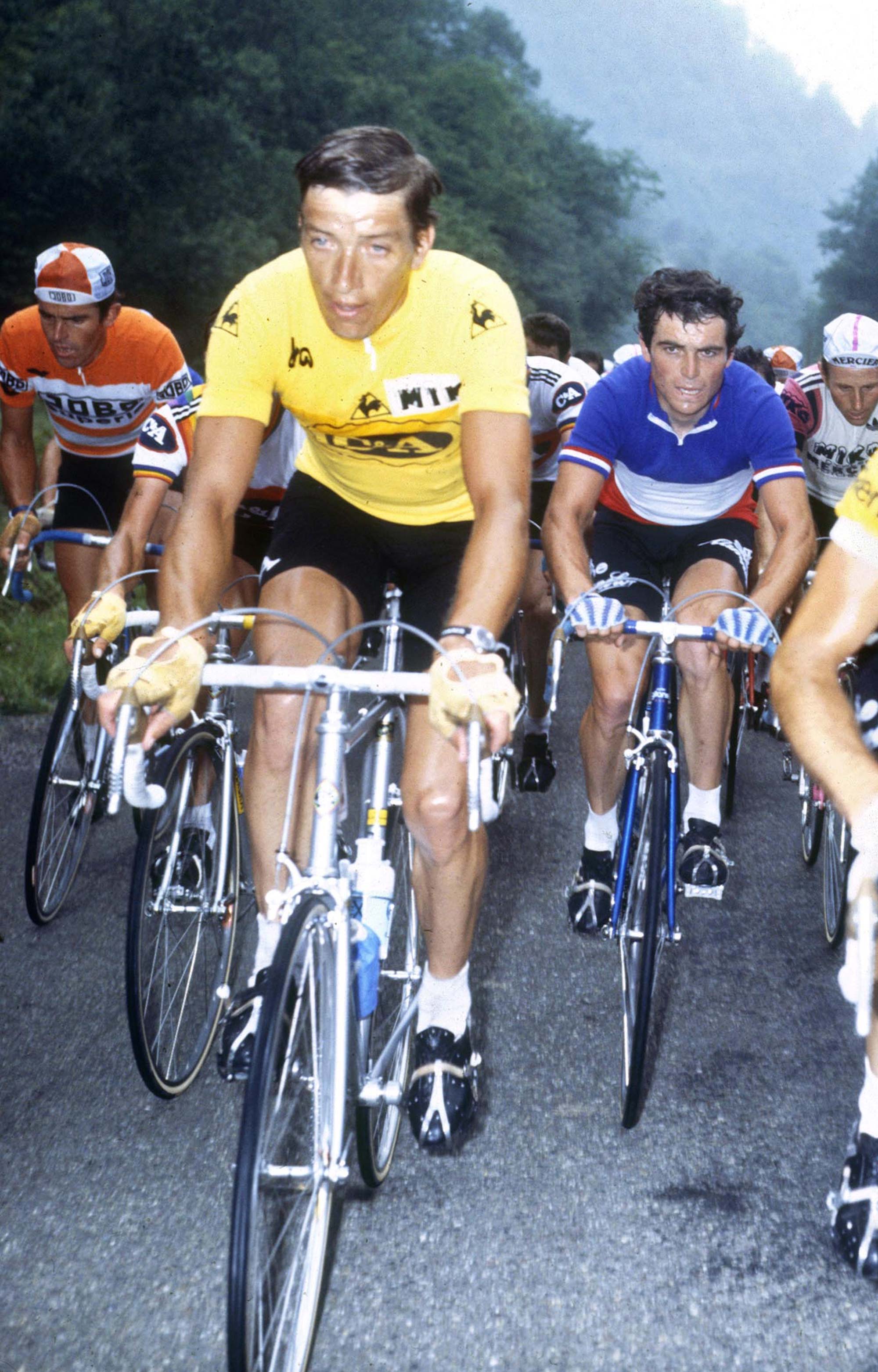 In the 1978 Tour, Bruyère wore the yellow jersey for eight days and finished fourth on GC. Here, in stage 17, he sets the pace ahead of Bernard Hinault.

Following his victory in Het Volk, Joseph started but did not finish two more races. On 8 April 1980 he announced his retirement.

All was not well in the team. Bruyère had not been paid, did not look like getting paid, and so took his leave. The team turned up for the Tour de France in July with the same blue and white ‘Marc’ jerseys but with different writing on them and, significantly for our story here, different bikes.

The name of bike supplier ‘Carlos’ was missing from the jerseys, and the squad was now known as Marc IWC VRD.

The new bike supplier? You guessed it: Eddy Merckx.

Our feature bike appears to be one of these very early production or pre-production Merckx frames. It has the ‘Eddy Merckx’ signature engraved in the seatstays, rather than the ‘EM’ symbol, which the later bikes had.

The bottom bracket has ‘Eddy Merckx’ cast into it, something not seen on later bikes. It shares a common feature with a 1984 Europ Décor team bike in my collection, in that it does not have serial numbers stamped into the bottom bracket shell, or anywhere else for that matter. 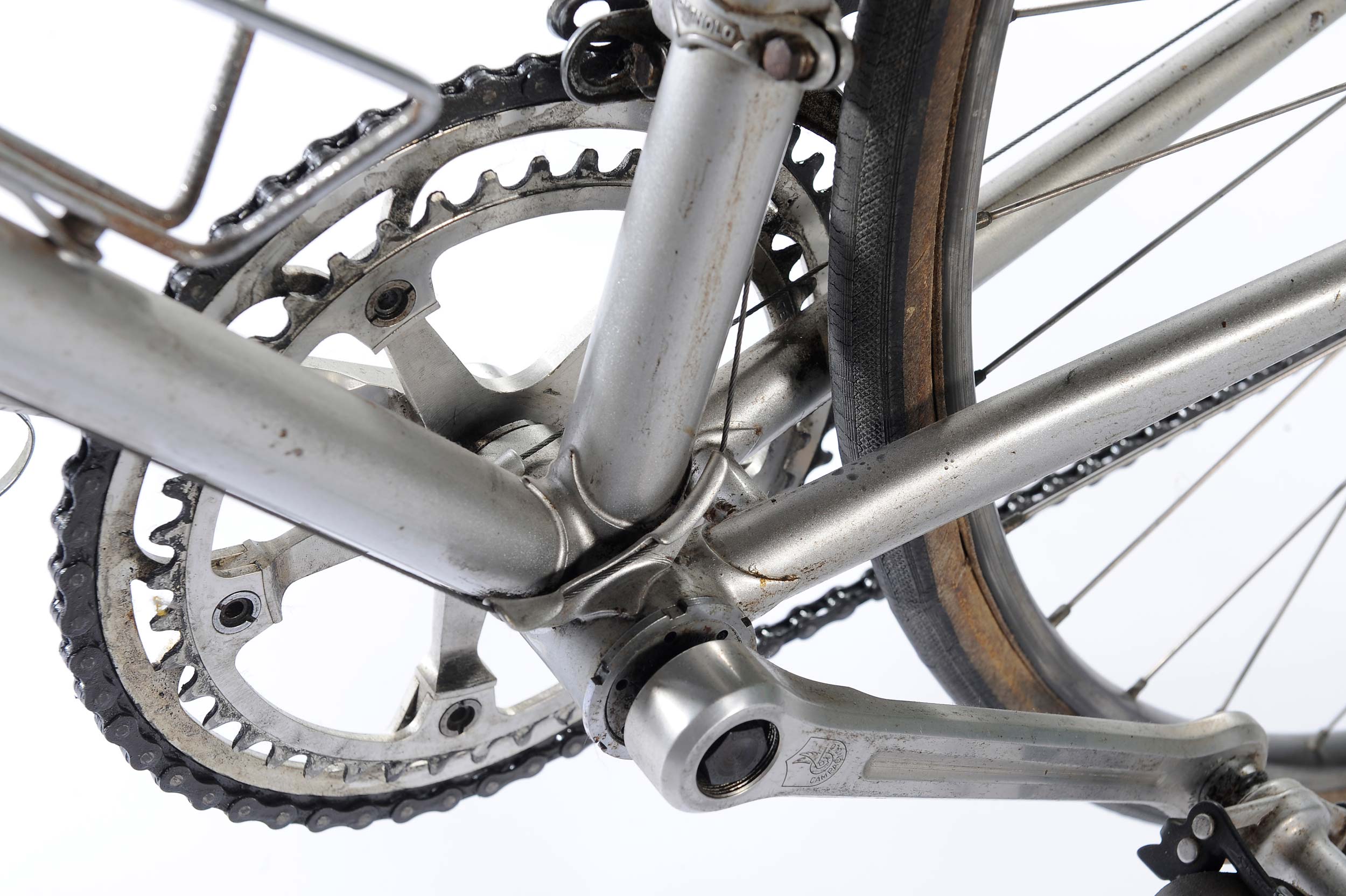 Gear cable routing over the bottom bracket was phased out by around 1984, progressing to the modern way, underneath the BB shell. Merckx held on to the old way longer than most, with good reason. This method was better. Whoever thought that placing the cables exactly where mud and grit accumulates must have had a severe lapse of concentration.

As Joseph Bruyère won Het Volk riding a bike clearly labelled ‘Carlos’, and retired some five weeks later, it is safe to assume that he did not actually race on our feature bike.

However, I think we can conjecture that he was issued a new Merckx bike along with the rest of the team, either officially or unofficially, somewhere between March and July of 1980.

While this Retro Review does not adhere strictly to our normal format of ‘a bike, a rider and a significant race’, it has been an interesting exercise.

Joseph Bruyère was certainly a worthwhile subject, he won Liège-Bastogne-Liège twice, Het Volk three times and was a key player in the 1978 Tour, so we could have concentrated on any one of those events; it was just the bike that didn’t quite fit our criteria. The museum has it displayed as ‘Joseph Bruyère’s bike’.

Did he race on it? Probably not.

Did he ride it? Possibly, it certainly looks like someone has.

Is it interesting? Certainly.

Who knows, Eddy himself may well have built the frame, under the watchful eye of his own master frame builder, Ugo De Rosa. • 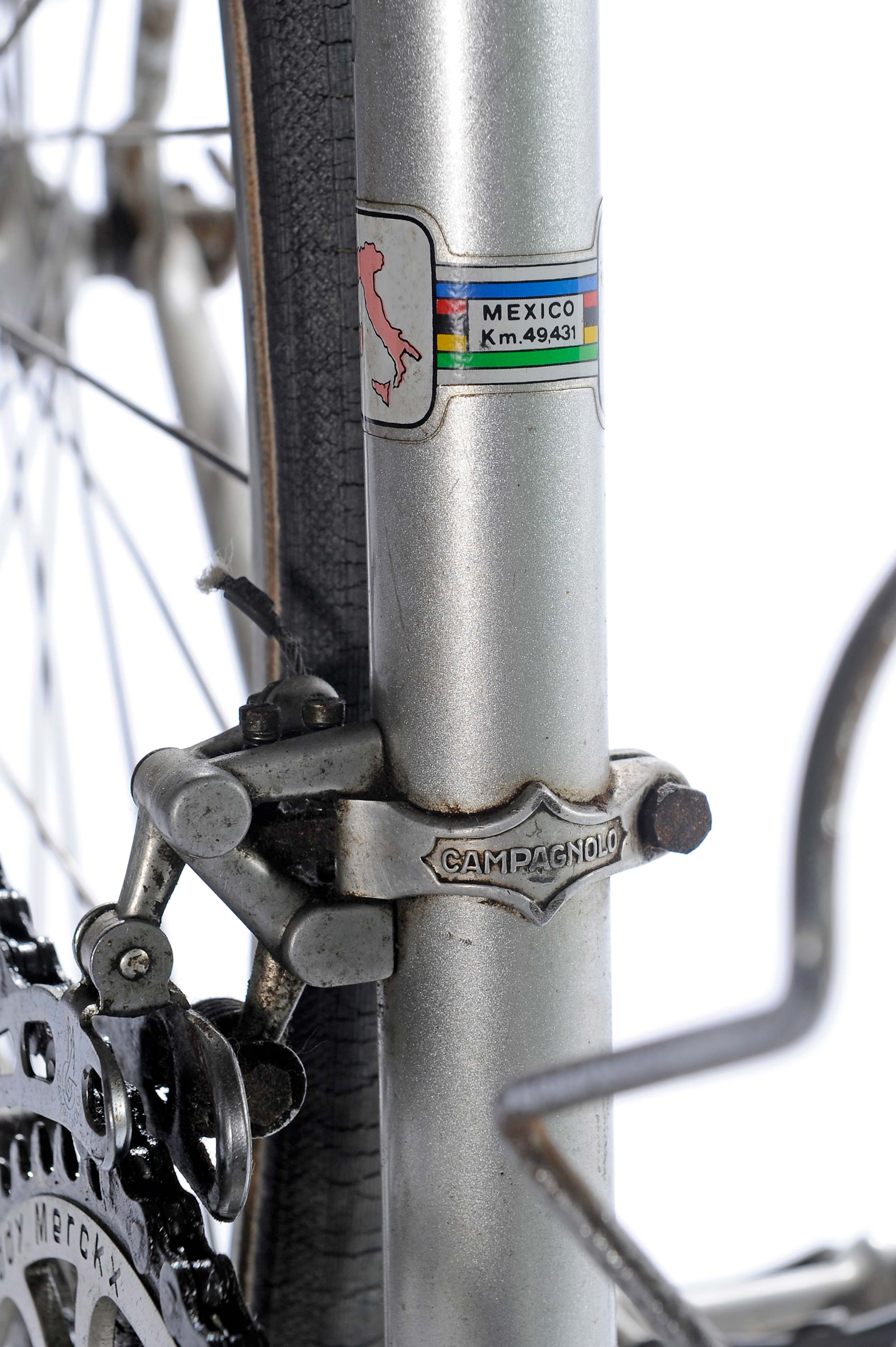 There are two of these decals on the seat tube, one side showing a map of Italy in pink, representing Merckx’s Giro wins (five), and on the other side a map of France in yellow, representing Tour wins (five). The ‘Mexico KM 49.431’ of course refers to the distance covered in his long-standing hour record, set in 1972. These decals remained the same for many years, but the ‘Mexico’ section was dropped in 1984, after Francesco Moser achieved 51.151km early that year.