Early in 2019, the Focus Izalco Max was relaunched with a complete design overhaul.
Rob Arnold got one of the new frames and built it up with SRAM’s new Force AXS eTap groupset, Zipp wheels and handlebars, and Pirelli tyres.

Note: this is an evolving page which will be updated when changes are made to the bike.

When this frame arrived in a box, it was part of another project: the build of SRAM’s new second-tier electronic groupset with wireless shifting. Force AXS eTap was launched midway through 2019. A few months earlier the first shipment of Focus’ new Izalco Max landed in Australia and it seemed appropriate to mix the two: Focus and Force, black on black.

Although my request was for a “bit of colour, if possible” – after so many years riding black or blacker bikes – when it all came together, the scheme seems obvious. It is a stunning looking bike. 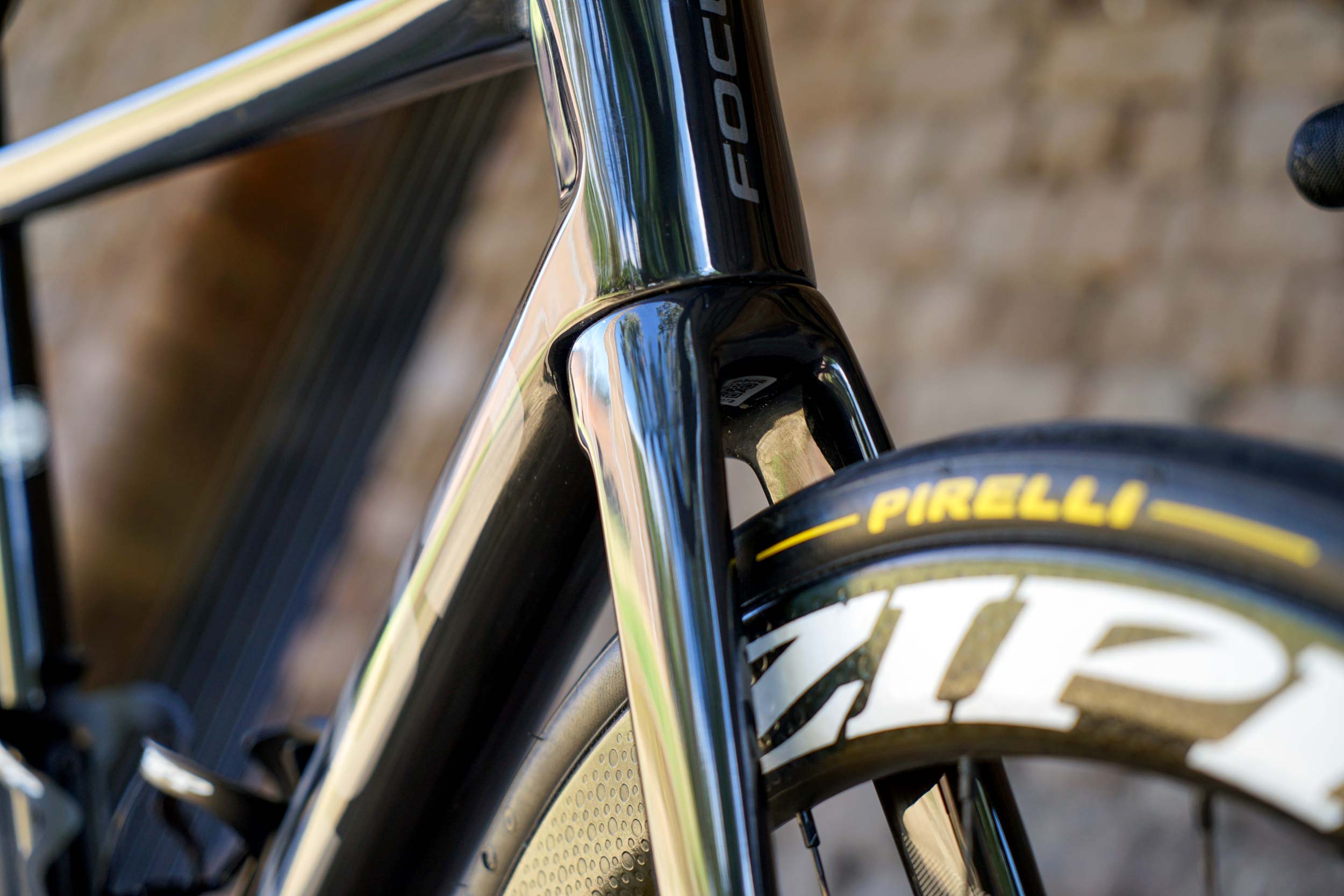 These Pirelli ‘P-Zero Velo’ tyres are 25mm but the Izalco Max of 2019 can accept much larger without there being any clearance issues.

You can scroll through an online catalogue and match frame to component preference, find your nearest dealer, exchange your sizing details, hand over some money and ride away.

The story of this bike differs slightly. Instead of an off-the-shelf spec, it became a build-a-frame project.

The bike build was documented in a couple of YouTube clips:

Then came the time to ride… and I’ve been largely silent about the bike ever since. It’s not that I’ve been deliberately coy – rather, after so many years spent reviewing bikes, I’ve enjoyed just riding it without writing about it. Until now.

*Prices quoted are in Australian dollars and were correct at the time of publishing (October 2019). 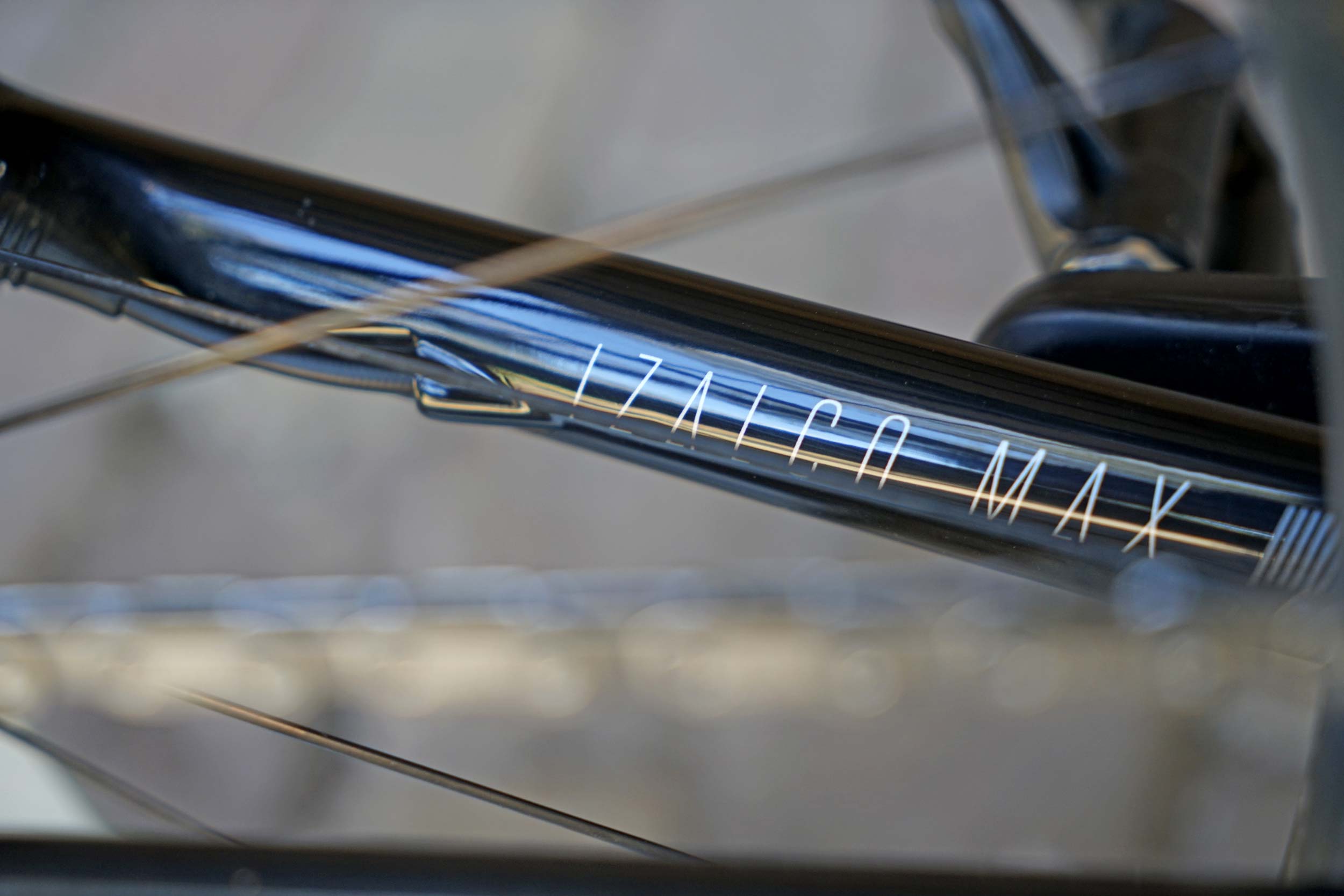 When you spend a few hours in a workshop watching a bike come together, you feel like you know it a little more than if you just point to something on the shelf and ask if it’s available in your size.

By the time I left Wooly’s Wheels on the day of the build, I was familiar with the Izalco Max… but, after having tested so many bikes for so many years, I didn’t really think the ride quality would surprise me. I was wrong.

Within a few hundred metres of my first ride, it was obvious that something was different… but what?

I’d watched the bike being built, but not studied the numbers beforehand and didn’t know any of the angles or measurements. Aren’t these all the same in 2019 anyway?

That’s the assumption but, in time, I’d discover that – with its latest Izalco release – Focus has opted to break with tradition and stray from the ‘standard’ in 2019.

The head angle is more relaxed, the bottom bracket around 6-8mm lower than other similar recent releases (eg. BMC, Cannondale, Orbea, Specialized). This is likely to be the reason for the big difference in ride characteristics. It is, at least, something tangible to explain why the Izalco felt considerably different to other bikes. (See chart, below.) 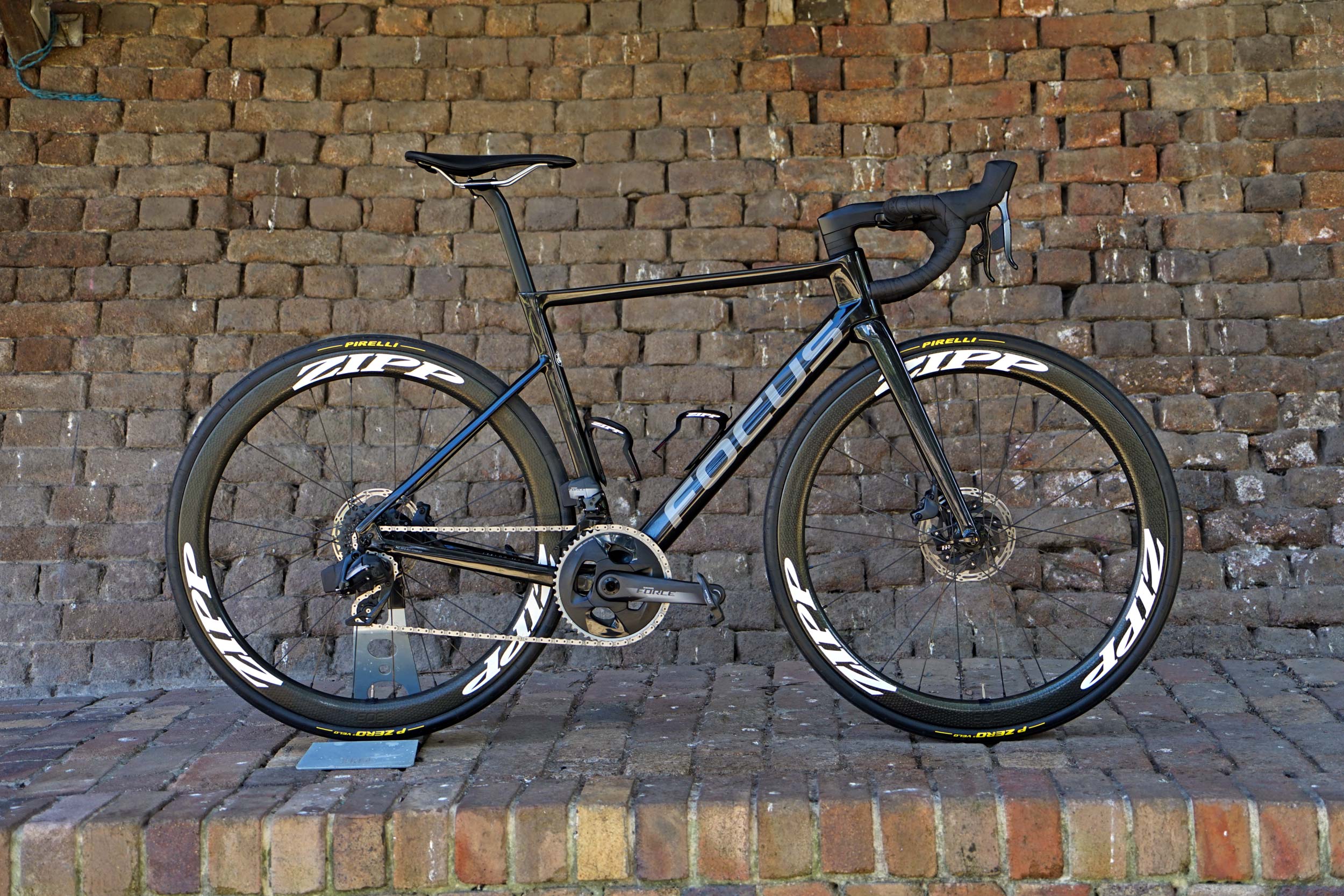 Mass-produced road bikes are becoming more similar the more manufacturers respond to wind tunnel testing and market demands. Angles and measurements have been refined over time and a series of fairly standard numbers are issued at the design phase.

It adds up to minor discrepancies. One bike tends to feel similar to the next.

A few quick kilometres on the Izalco Max of 2019 and it was apparent that something was different. I was guessing at reasons why and conjured some absurd ideas: eg. the heavy stem (228g) gave it a more planted feel. What!? I know, it’s ridiculous.

But there is something about the Izalco. That’s what I told the local agent when reporting on my first ride. But, I said, I cant’t isolate what it is.

“Maybe it’s the BB height,” he said. “We have dropped it a few millimetres. It’s a response to the trend for bigger bag tyres.”

Habits change. Tyres get fatter. Disc brakes become accepted. Technology improves. But, often, the numbers stay the same. But Focus experimented with tried and tested formula and determined that a change may be worthwhile.

If the larger BB drop lowers the centre of gravity – or matches it to what it once may have been, back in the day when tyres were as narrow as 19mm – then the bike is going to respond differently.

From one Focus to another

My most recent road bike (from a long succession over the years) was a Focus Cayo. You can see it come together in another series of videos:

I liked it. And what I particularly liked was that the Cayo was not the top-of-the-line frame and it was built with more of a budget in mind… and yet it was on par with some of the top-end bicycle exotica that I’ve tested over the years. Gotta love a bit of value for money!

That was a rim brake bike and eventually the time would come when I’d make the switch to a disc brake bike of my own (after many years of testing them – from the early days in the market, to the broad acceptance of the concept that now exists). 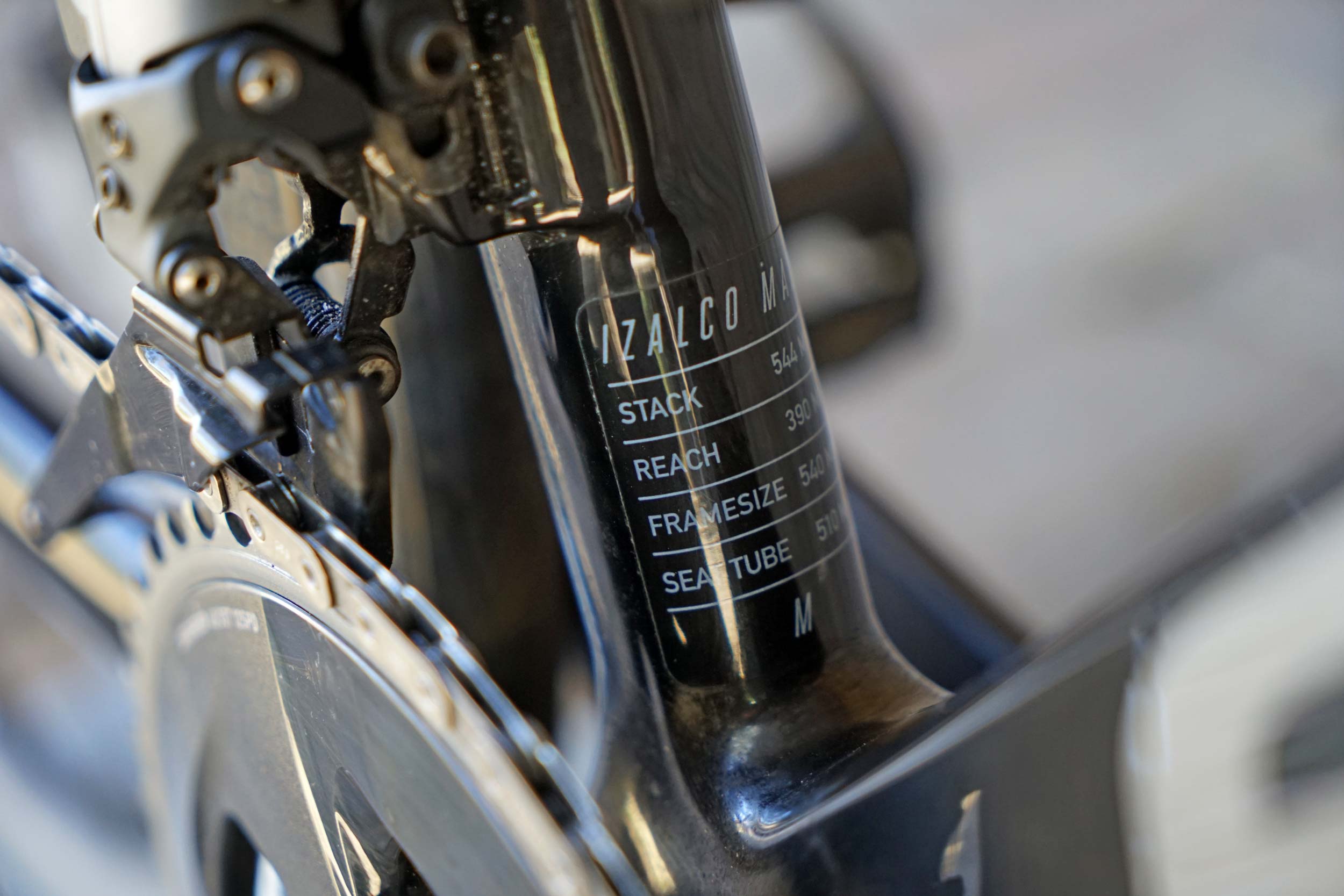 Gone are the days of churning big gears and the Force ratio I’ve ended up with – largely on a suggestion from a man at SRAM who knows me well – is a front combo of 48/35 and a 10-28 cassette. Gone too is the desire to put myself too deep in the hurt basket, and now I find the right gearing for the terrain and tap out my tempo.

The ‘semi-compact’ gearing on this bike suits my riding perfectly.

Interestingly, it took a month or so before I began experimenting with the SRAM app. And even then I wasn’t immediately sold on the sequential shifting option. Yes, it is logical. Yes, it functions smoothly. Yes, it does seem a little odd at first… and yes, it is what I’ll end up using.

The best bit is using one hand to shift up through your gears, the other hand to go down. Two triggers at once, as is standard for the eTap front derailleur shift, functions well enough but with the tap of a button on your phone, you can switch on the sequential option. I’ve done that now.

It is my bike. I can personalise it a little. And this is something relatively new to me after having been on and off test bikes for over 20 years. 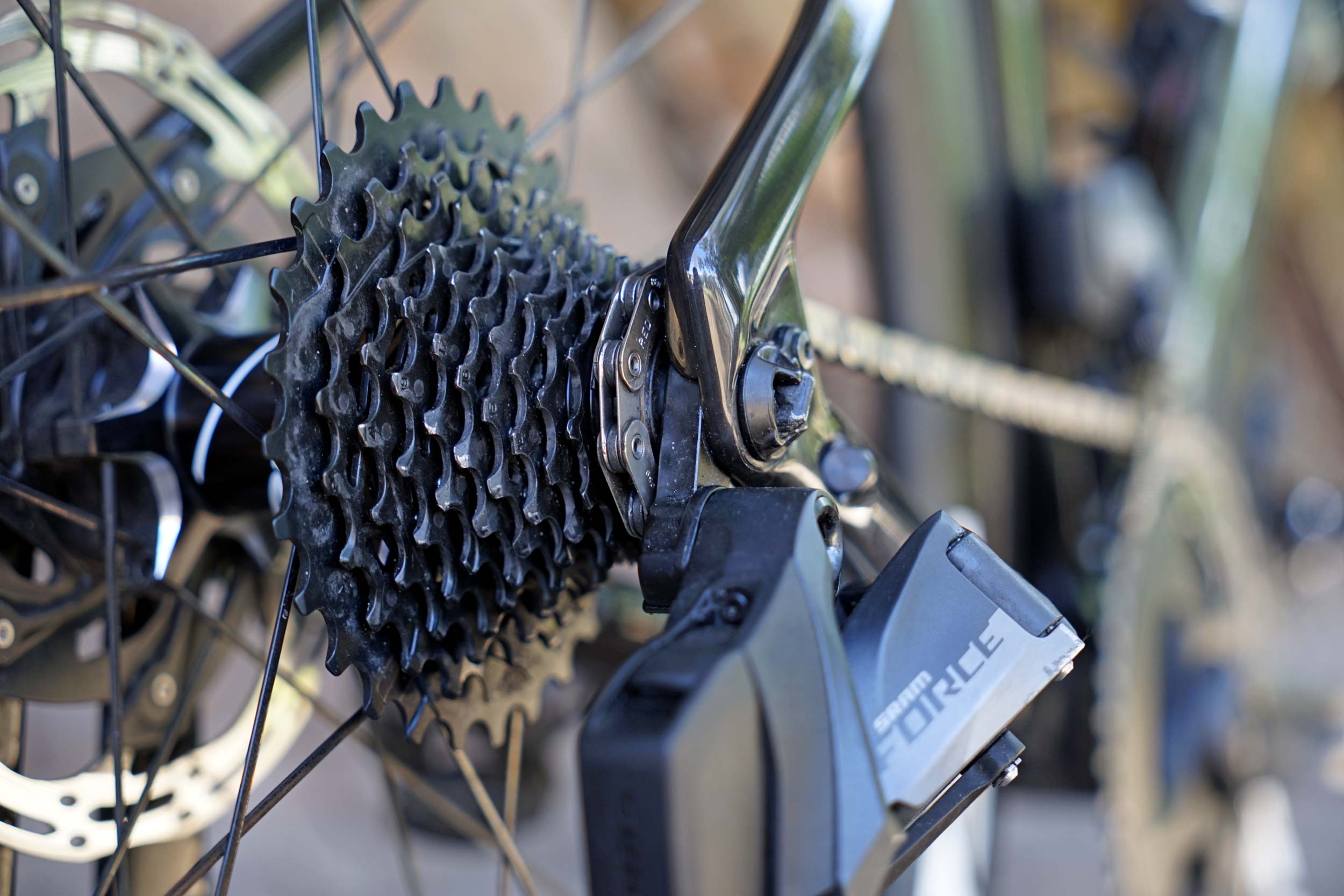 The benefit of 12-speed?

Time in the workshop reiterated some of the benefits of some innovations from SRAM and Focus and although one of the big talking points for the AXS groupsets (Red, launched in February 2019; and Force, launched in April the same year) is the 12-speed cassette, I’ve not really noticed the extra gear option.

The XDR adapter is easy to fit and the fastening system of the cassette is very easy to use. It turns an 11-speed bike into 12-speed with a minimum of fuss and although it is a tight fit (as the picture above illustrates) I’m yet to experience any issues with the chain touching the frame.

Three bikes in our house hang on hooks above the stairwell and when I first started using AXS, with the 48-tooth big chainring, it was a visual shock to see the bike above me as I walked down the stairs. It’s only the difference of a few teeth but it seemed severe. It was like that with the Cannondale review bike (with SRAM Red) and remains so with my Focus. 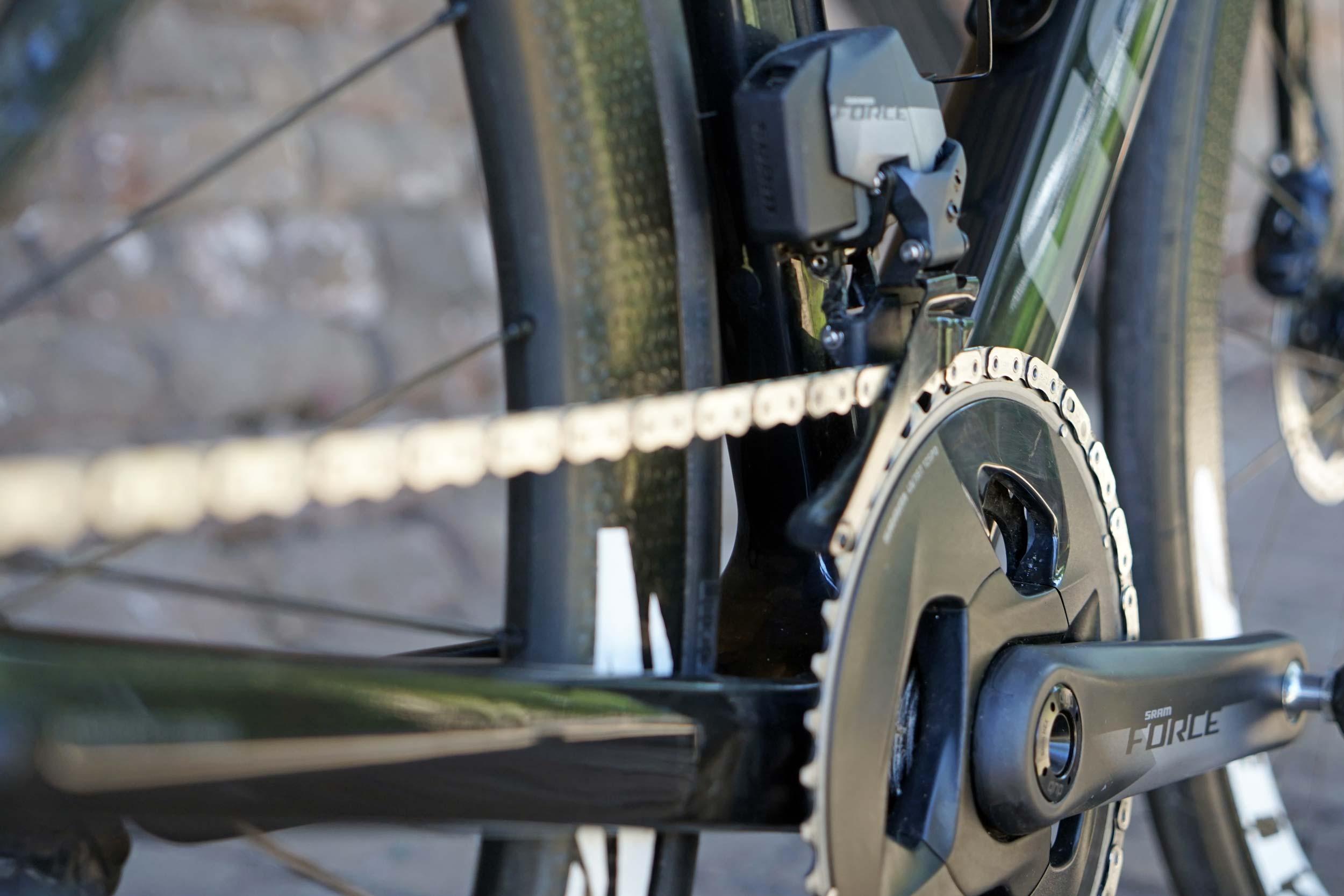 Issues with the Force cassette

One of the promises during the launch of the AXS groupset(s) is that it was said to be quieter as well as a more efficient shift. This is certainly true of the Red option but the black cassette that comes with Force is not only significantly heavier but also much louder… at least it was.

Some of the first-generation black 12-speed cassettes shipped with Force had some issues with excessive sound. Quite frankly, no matter how much lubricant or refinement of the gears, it was noisy!

With the help of several highly qualified mechanics and a couple of tech-heads from SRAM, we searched for the cause and tried to find some solutions to the issues with the sound of the chain grinding over the cassette but eventually surrendered. So too did SRAM; a few months after the original build of my bike, they issued replacement cassettes with additional housing between some of the gears. This remedied the issue… and there was much rejoicing, no doubt, by bike owners and mechanics alike.

(For the record, I have been working on a wheel comparisons and have been switching between the improved Force cassette and the lighter Red option, and the high-end one is still far quieter.) 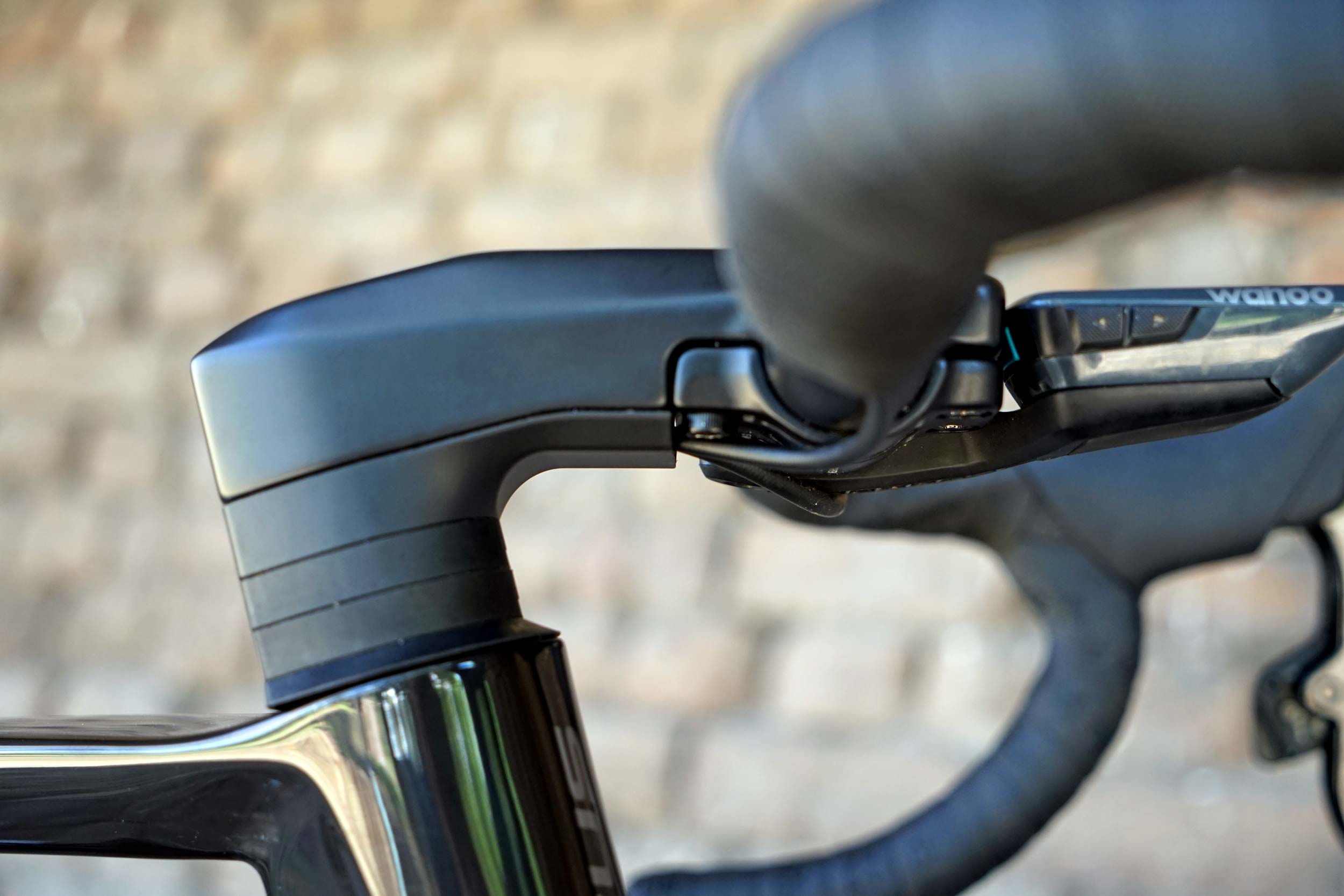